History is merciless and the law of heaven is reincarnated.

Twenty years ago, in 2000, Microsoft, as the largest technology giant with the highest market value in the United States, was deeply involved in the anti-monopoly vortex set off by the US Department of justice, and faced with the split crisis. 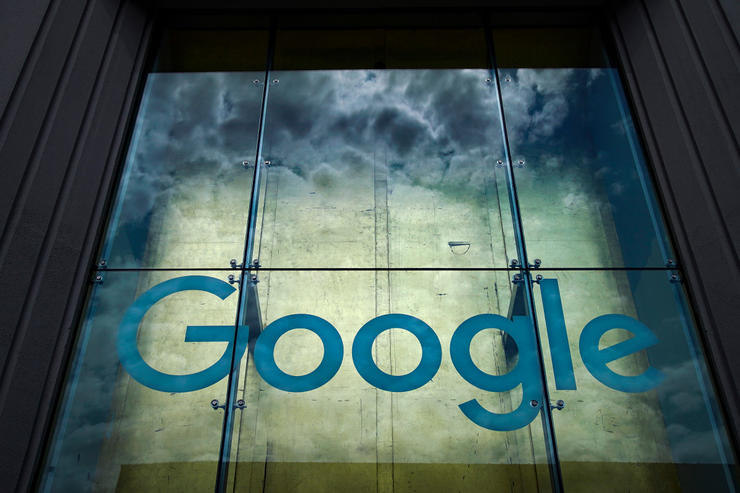 The Department of Justice said:

As one of the world's richest companies with a market value of trillions of dollars, Google is the gatekeeper of the Internet monopoly for billions of users and countless advertisers around the world.

As a result, it decided to launch an antitrust lawsuit against Google and said it was possible to take any action against Google.

Including the spin off of Google.

On October 20, the U.S. Department of justice formally launched an antitrust lawsuit against Google.

Specifically, the U.S. Department of justice, together with attorneys general of 11 U.S. states, initiated antitrust litigation in the District Court of Washington, D.C., with the objectives of:

To prevent Google from illegally maintaining its monopoly position in the search and search advertising market through anti competitive and exclusive behavior, and to remedy competition damage. 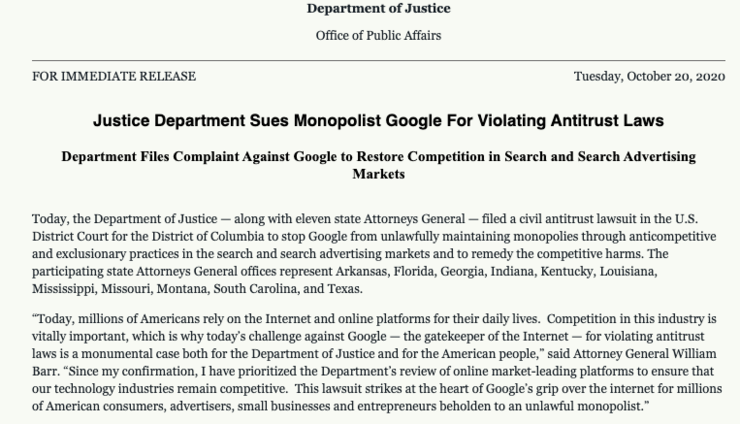 He also said that millions of U.S. consumers, advertisers, small businesses and entrepreneurs were affected by Google's illegal monopoly, and the lawsuit hit the heart of Google's Web grab. 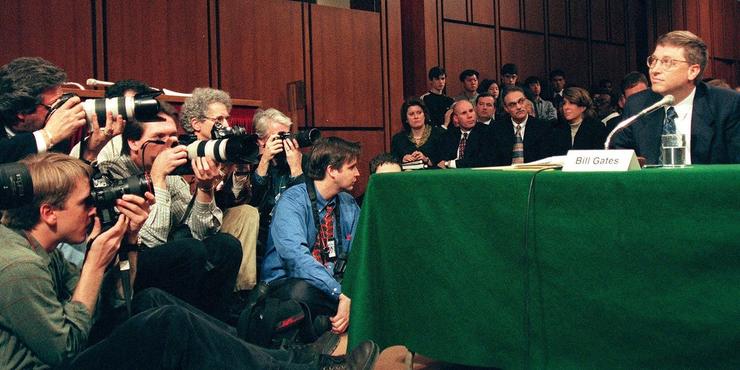 In response, Jeffrey A. Rosen, deputy secretary of justice of the United States, said that the Sherman Act (the first anti-monopoly law enacted by the U.S. Congress) was implemented again by the Department of justice to restore the role of competition, which will open the door to the next wave of innovation after the digital innovation.

This is also the first time that the US Department of justice has used the Sherman Act since the Microsoft antitrust case in 1998.

To some extent, the antitrust investigation of the U.S. Department of justice is actually accompanied by the development of a wave of science and technology, which has some significance of witnessing and influencing the historical process.

It is no surprise that Google has become the target of this antitrust case. 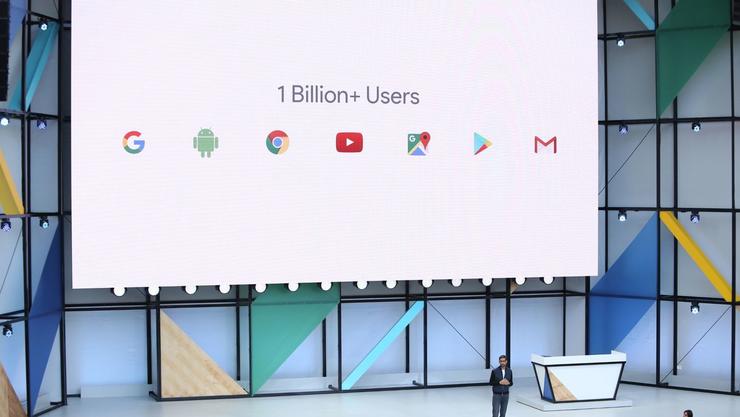 As a result, Google's services have essentially become the infrastructure of the global Internet (except China), especially in the United States.

It is worth mentioning that not long ago, according to the report released by the antitrust sub committee of the judicial committee of the house of representatives of the United States, Google is an absolutely dominant enterprise in the field of general search in the U.S. market.

Specifically, Google search accounts for 81% of the search volume on the desktop and 94% on the mobile side in the United States.

According to the US Department of justice complaint, in order to achieve the above goal, Google has adopted the following measures to illegally maintain the monopoly position of search and search advertising: 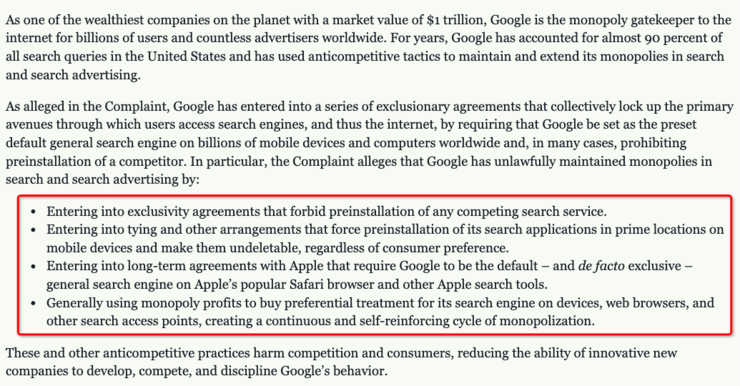 These and other anticompetitive practices hurt competition and consumers, reducing the ability of innovative new companies to develop, compete and constrain Google's behavior, the Justice Department said.

By filing a lawsuit, the U.S. Department of justice is trying to stop Google's anticompetitive behavior and restore competition among American consumers, advertisers and all companies that rely on the Internet economy.

Google said it didn't agree, but its troubles were just beginning

Google, of course, is not satisfied with the U.S. Department of justice's charges. 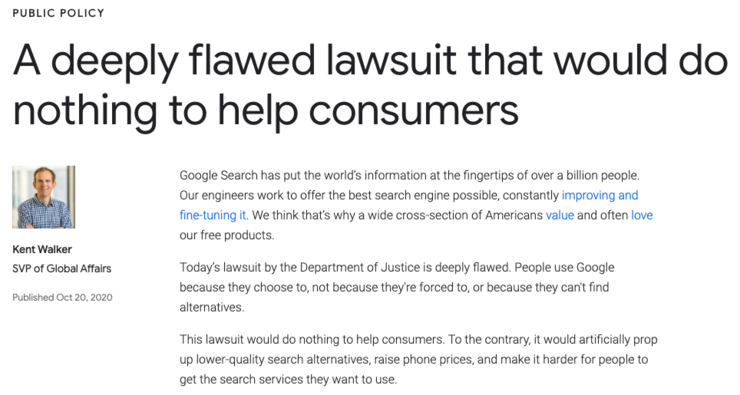 In this response, Google also proved that it was not a monopoly through the status of search engines on apple, Android, windows and other platforms. It also states:

We can understand that our success needs to be reviewed, but we stand by our position. Antitrust laws in the United States aim to promote innovation and help consumers, rather than change the competitive environment for specific competitors or make it more difficult for people to obtain the services they need.

It is obvious that Google has a tough mouth and intends to stand opposite to the Department of justice in this antitrust lawsuit.

In fact, outside the United States, Google may also face antitrust investigations from the European Union, China and other regions. 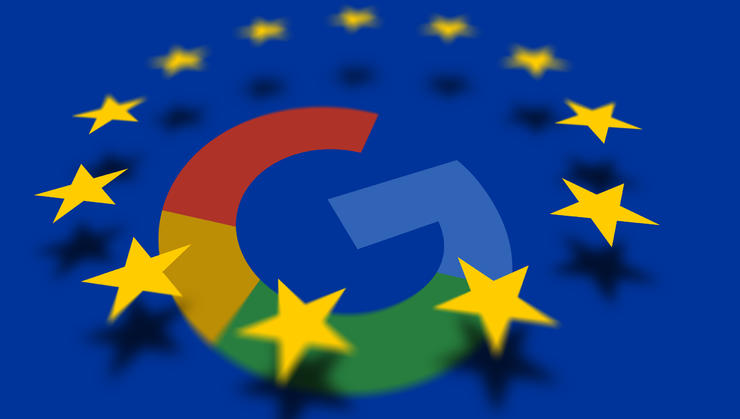 It is worth mentioning that Google is still in the process of EU antitrust investigation. The investigation project is Google's $2.1 billion acquisition of Fitbit.

Reuters also said a decision could be made as soon as October on whether a formal investigation into Google would eventually be carried forward.

From a historical point of view, 22 years is just a flash, but for the development of the Internet, it is a sea of change. Google is a giant in this wave of Internet tide.

In fact, Google (alphabet) is the fastest private enterprise to reach a trillion market value in human history, only in 21 years. 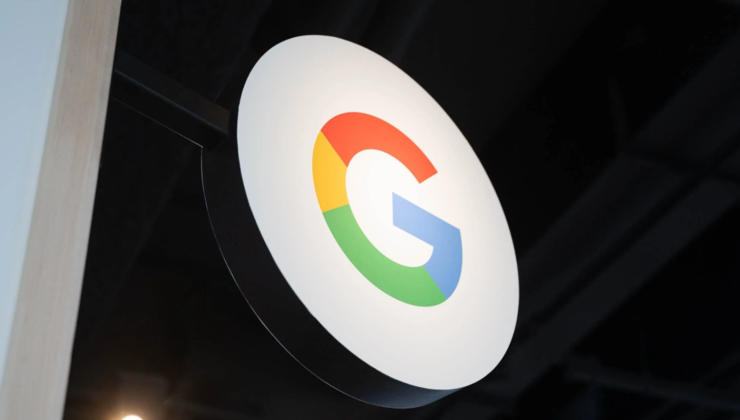 But history is so ironic that Google has ushered in a major crisis at a time of glory.

Can Google survive this time?

Reference materials of this paper:

Related news
Google Shopping China Business Invitation Project has been launched
Semicon China: Huawei and Exxon bring semiconductor intelligent quality inspection and measurement solutions
TikTok America sell Google?
Tesla has deployed PowerPack battery energy storage systems at 60 electrify America charging stations
China hard disk mine disaster, experts say hard disk prices will continue to rise
Glory high-tech products help team China's national team set out to show China's business card to the world
Telecom Operators Essential for the Metaverse:China Mobile Chairman
Hot news this week
Sources say Penguin Random House's deal to buy Simon & Schuster has fallen through
Any chance of taking over the agency? Sources say Tencent has been in contact with Blizzard for at least a year
Blizzard's founder responded to NetEase's contract renewal: Cooperation is a two-way street, and we will do our best to make Blizzard games accessible to Chinese players
Ali suddenly released a new chip, the domestic chip breakthrough, abandoned the American chip fantasy
Better than Huawei or Apple? It is revealed that Samsung S23 uses satellite communication: can also space voice
Players recognized as the best of the year! The Old Man Ring won four awards at the 2022 Pension Rocker Awards
Chaozhou accident relatives do not recognize the third party identification! Why doesn't Tesla Provide Driving Data?
Today is the 18th anniversary of Blizzard's World of Warcraft: unfortunately, the national service will be discontinued in January
According to sources, TSMC replaced Samsung to win a large order of Tesla's assist driving FSD chip, based on the 4/5nm process
Jinshanyun reported revenue of 1.97 billion yuan in the third quarter, down 18.4 percent year on year
The most popular news this week
For the first time, China surpassed the United States and was recognized as the world's largest in the number of valid patents
SoftBank has developed technology to use drones to detect mobile phone signals from people buried in disasters
Tencent Holdings: Purchased 1.29 million shares today at a cost of HK $351 million
Saudi player dispels rumours of winning after being awarded Rolls-Royce Phantom: No matter
The super flagship endorsed by Wu Jing hits the shelves: almost all the front screens will be released next week
Huawei Watch Buds: two-in-one design of watch earbuds
No wonder people still don't buy TV when the price is down
Qualcomm developed PC processor behind: ARM toothpaste kiss son architecture is not good
Flavor is "technology and hard work"? Don't worry about it!
Tesla's new car will be returned after being bought three times in three days