The epidemic can not stop Chinese mobile phone manufacturers from seeking growth. After conquering the Indian market as a "gold rush" and making it a conventional "warehouse for shipment", they also targeted Europe.On the 10th and 20th, vivo announced that it would further expand its business in the European market, officially entering France, Germany, Italy, Poland, Spain and the United Kingdom, and cooperate with UEFA to become the official global partner for the next two European cups.

China's mobile phone manufacturers are aiming at Europe at the same time, mainly because of the current market competition and development trend around the world.

Domestic market competition is fierce, from the degree of concentration of market share can be seen.

The Chinese smartphone market shipped about 87.8 million units in the second quarter of 2020, down 10.3 percent from the same period last year, according to IDC data released in August, the top five smartphone manufacturers in the Chinese market, namely, OV HuameiAppleIn this quarter, its market share has reached 97.1%, 4% higher than that of 93% in the second quarter of 2019. 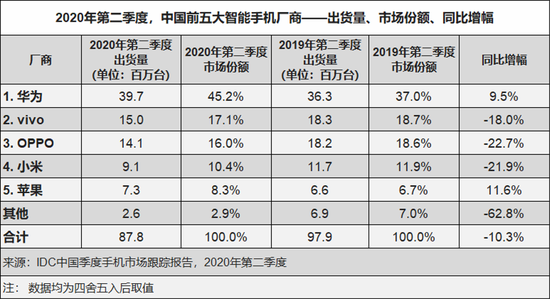 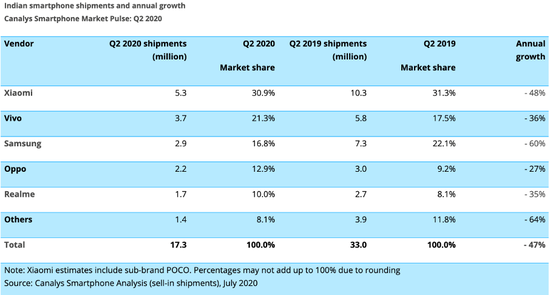 When Chinese mobile phone manufacturers headed to India, using IDC fourth quarter 2015 data as a reference, local smartphone market share in the top five can also be seen in India's local brands Micromax、Intex、Lava, a total of 30.5 percent, now they have been "defeated" by Chinese phones, disappeared from the list.

Looking at the Southeast Asian and African markets where Chinese mobile phone manufacturers are easy to enter due to geographical, political and national strength advantages, the purchasing power of local consumers is limited, and the market share occupied by Chinese manufacturers is not low. 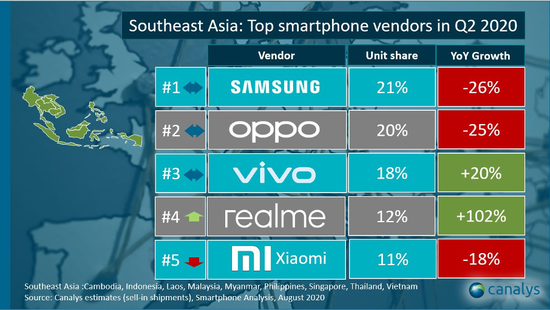 According to the data released by canalys in August 2020, in the second quarter of 2020, Chinese mobile phone manufacturers oppo, vivo, realme and Xiaomi accounted for 61% of the total volume of Southeast Asia's smartphone market in that quarter. If Samsung is added, the market share of the top five brands will reach 82%. (Southeast Asian markets in canalys data include Cambodia, Indonesia, Laos, Malaysia, Myanmar, Philippines, Singapore, Thailand and Vietnam) 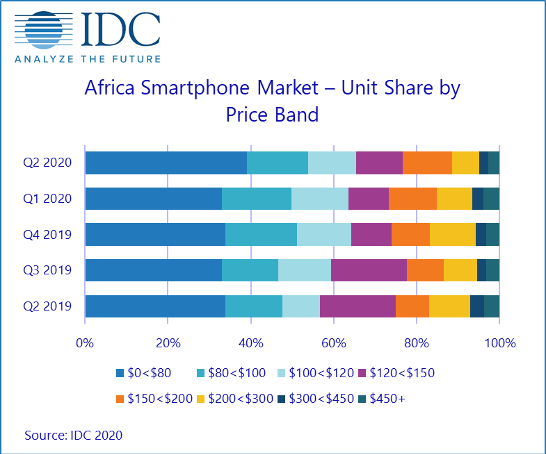 In African markets, China's mobile phone makers have been strong in Transsion, According to IDC data, Based on shipments, Audio brand Tecno、Itel、Infinix in the second quarter of 2020 accounted for 45.2% of the African smartphone market share; On the other hand, Local smartphone consumers have limited purchasing power, According to IDC statistics, In the second quarter of 2020, In the African smartphone market, Less than $80, Less than 600 RMB), which accounts for nearly 40% of the market, Models below $120 account for more than 60% of the market.

For comparison, according to IDC statistics, in the first half of 2020, the average unit price in China's overall domestic market rose by about 15% year-on-year, reaching 357 US dollars.

As such, for the pursuit of both sales growth and the pursuit of high-end brand Huamei OV, the next step is naturally to the market capacity, strong purchasing power of consumer electronics highlands in Europe and the United States.

Considering the uncertainty of Sino US relations at this stage, it is not difficult to understand why Chinese mobile phone manufacturers are targeting Europe.

A domestic mobile phone maker CEO told the media that sales in India and Africa are easy, but that is not international, only after Europe and the United States are recognized to be eligible to talk about the global market.

Europe, especially the powerful countries in Western Europe, has accumulated deep in the field of technology and consumer electronics, local users have strong consumption power, and are more picky about the brand and quality of mobile phones. Here, Chinese mobile phone manufacturers should build brand image and trust step by step.

Sports is the common language of all mankind, and it is also an excellent way to establish a brand. When Samsung first entered Europe, it not only sponsored the international equestrian Super League, but also sponsored the Premier League from 2004 to 2008. Since then, the two sides have cooperated for many years. In 2012, Chelsea won the Champions League for the first time, and the Jersey sponsored by Samsung was worn on the podium. Kim Yin soo, President of Samsung Electronics (Europe), said in an interview with Guangming Daily in 2007 that sponsoring sports to achieve the purpose of marketing means high investment. In Samsung's view, such high investment can bring high returns.

Vivo has also adopted a similar approach when entering Europe, and the effect has been verified - during the 2018 World Cup in Russia, as an official sponsor, the popularity of Google search in Germany and France, the most important markets in Europe, has increased sharply. In Russia, the popularity of Google search of vivo has increased significantly in the past five years. According to the data released by canalys, in the fourth quarter of 2019, the shipment volume of vivo in Russia increased by 1190% year-on-year, ranking the top five in the local smartphone market share.

Now vivo has become the official global partner for the next two European cups. When the European Cup starts next year, the brand image of vivo may be more intimate and familiar to the European people who love football.

Adjust products according to the characteristics of European consumers,

It is a compulsory course for Chinese manufacturers

Brand promotion is just an open road. Whether we can stand firmly in the local market depends on the products.

China's mobile phone industry once circulated a view: there is no universal and universal mobile phone in the world, except foriPhone。 But in fact, Apple will also adjust the hardware and software of the iPhone for different markets. For example, the US version of the iPhone does not support the dual card dual standby of two physical SIM cards, while the Bank of China iPhone is equipped with this feature pioneered by Chinese mobile phone manufacturers. Thus, product localization is a required course for mobile phone manufacturers to explore new markets.

Vivo has always been a "top student" in team localization and product localization. Taking the Indonesian market as an example, vivo developed a motorcycle model for local users after learning that motorcycles are the most popular mode of transportation in the region and that people often receive calls when riding.

At present, vivo is also adhering to the strategy of "more local, more global" in the European market.

In November 2019, vivo has set up an office in Europe and formed a team from 16 countries at its European headquarters in Dusseldorf, Germany. Before further expanding the European market, vivo has conducted research and interviews with more than 9000 local consumers.

In order to meet the preferences of European consumers, vivo's mobile phones for the European market are pre installed with pure and minimalist native Android system.

Considering that European consumers attach great importance to personal data privacy, vivo has made targeted preparations from three dimensions of organization, process and technology in accordance with the requirements of EU general data protection regulation (gdpr), and established a global data protection team in 2018.

Vivo's priority in launching X-Series and Y-series products in the European market this time is due to the fact that local consumers attach great importance to the appearance aesthetic design, photography and fast charging, and the wireless headset device is introduced to meet the local consumers' love for outdoor sports and music listening.

Another important difference between the European market and the Chinese market is that the channel, where the operator channel is still strong, may account for half of the overall sales of mobile phones.

France's Le Monde said in an article in October that China's smart phones began to conquer France. The article briefly introduced the development of oppo, Xiaomi and vivo in France, and also revealed that vivo, through its French team, has established partnership with telecom operators and large retailers.

"This year has been a challenging year for everyone in the world, and the living and business environment in which we live has changed," said Deng Li, vice president of vivo and President of European markets when he announced his official entry into the six major European markets. We can be loved by more than 370 million users worldwide, and we are confident to win the trust of European consumers. "

According to data released by counterpoint at the end of July, the European smartphone market declined by 24% year-on-year and 22% month on month in the second quarter of 2020. But as mentioned at the beginning of the article, the epidemic situation will not stop Chinese mobile phone manufacturers from entering Europe.

In the European and American markets, major sales promotion through various channels at the end of the year, such as the familiar "black five" promotion, will be the key breakthrough for each brand to impact sales and accumulate market share. Huami ov's competition in Europe has begun, and the first small climax will come.

Related news
Chuan Amazon plans to introduce Amazon Go's unattended cash register technology into airports and cinemas
Hot news this week
Heavy weight! Apple M1 exposes the first high-risk vulnerability: discovered by Chinese
Overseas sales of Chinese bicycles are crazy: nearly 16 billion yuan worth of exports have been ordered to the end of next year
IPhone 12 screen green: I choose not to forgive it
Only mobile phones can charge quickly? Huawei matebook X's dexterous and fast charging liberates your endurance anxiety
Lottery mode will be opened: it is reported that apple is looking for Samsung OEM M1 TSMC 5nm orders, accounting for only 25%
China Mobile Partner Conference is coming. It's so simple to start 5g life
The report says the world's largest producer of plastic waste is the United States: serious environmental damage
Improve the efficiency of diagnosis and treatment, improve the experience of medical treatment Baidu health won the "2020 Best Health Platform Award "
Tencent is punished by Internet
Philips show HDMI acousto optic synchronizer lights up family entertainment space with full scene light
The most popular news this week
Huawei once again: we really do not build cars to help you build good cars
Xbox Series X play call of duty 17" brick "T group: under investigation and repai
9.9 yuan, python, 25000 per month? The truth is cruel netizen: not as good as station B
Windows 10 now supports more device driver updates
Full exposure of RTX 30 notebook graphics card
Short Tesla is like fighting against the Fed?
The secret of Xiaomi becoming the biggest black horse is in the best financial report
The battery mode of Ruilong 4000 notebook is inferior to Intel's 11 generation core? Linux platform test is not quite true
Linksys velop tri band mesh router now supports apple homekit
Easy job search dog recorder S1 helps you tear off the "social animal" label