AMD's sharp dragon 5000 series processor will be on the market early next month. The performance of the new zen3 architecture IPC will be greatly improved, but the technology is still 7Nm level,It's officially called the more mature 7Nm process.

According to the earliest rumor, AMD's zen3 process is said to be equipped with 7Nm EUV process. This is one of TSMC's three versions of 7Nm process. Compared with the other two processes, it will use EUV lithography machine, and the lithography processing efficiency is higher.

On the issue of whether zen3 will participate in EUV process, AMD's official attitude has always been vague,Only the improved 7Nm process is emphasized, and the traces of EUV are directly removed from the official roadmap. 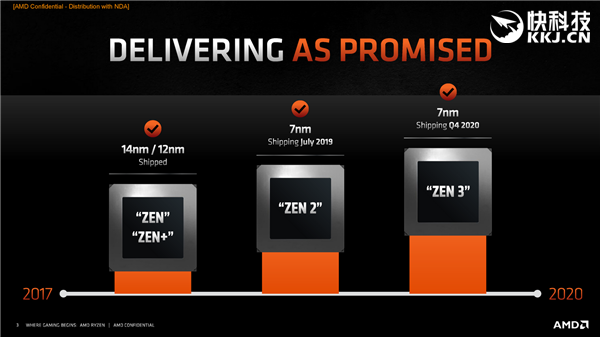 However, the Taiwan media mentioned a few days ago,Amd zen3 used in the 7 nm process is EUV lithography process, but only used four layers of EUV lithography, not many.

Of course, this statement has yet to be confirmed by AMD. AMD's attitude on this issue is also more implicit. EUV is not mentioned in the roadmap, but the official has not completely denied the EUV process. It seems very sensitive.

For TSMC, the 7 nm EUV process is only water testing, and it will not use a complicated EUV mask,The nm begins to increase gradually, EUV the number of layers rises directly to 14, and 3 nm to 20,In the future, it will gradually replace the responsible multiple exposure process.