Since U.S. Election Day (November 3), US President Donald Trump (Donald Trump) posts have reportedly been Twitter and Facebook with a total of 61" labels "because of their misleading or controversial content. Trump has always liked to attack large technology companies, saying that these online platforms often target him. 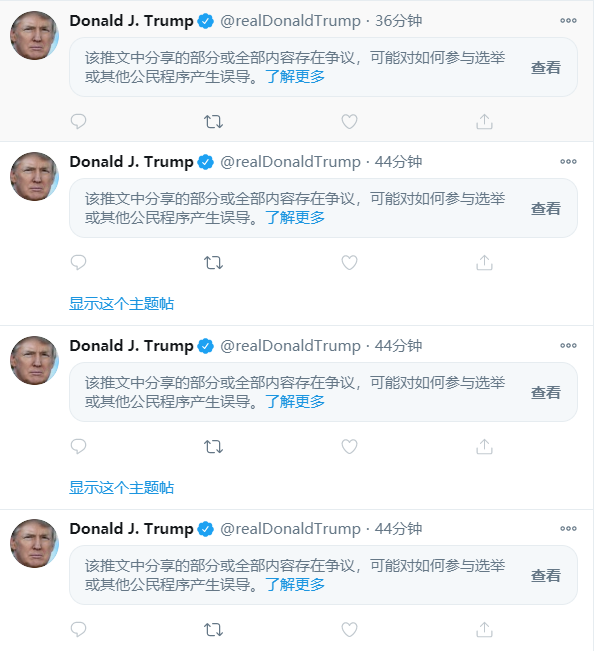 For months before this year's presidential election, trump has been making false, completely unproven allegations of widespread voter fraud and accusing the Democrats of manipulating or stealing elections without any evidence.

In response to the claim that "social media is linked to the spread of dangerous false information", and also worried that allowing trump to spread blatant lies, raising doubts about the full legal outcome of democratic elections and triggering more unrest and even violence in the United States, both twitter and Facebook were forced to implement new policies before and after the election to quell Trump's own problem.

How necessary these new policies have proved. Since the election day began counting votes (until Sunday afternoon, Pacific time), Twitter and Facebook have labeled Trump's posts (including retweets)34 and 27, respectively, because of their misleading or controversial content ".

Does the competitor Joe Biden (Joe Biden) post also be labeled by these two platforms? The answer is no. If you think this is a conspiracy against Trump, it's a big mistake.

If you take a moment to really read and understand the difference between the two candidates' posts, you will find that one candidate's speech needs to be dealt with like a time bomb, while the other candidate's behavior is really like running for president of the United States.

Since Tuesday, 38% of Trump's tweets have been tagged with alerts by twitter

Several trump tweets about counting votes have been tagged by twitter

Related news
Since election day, twitter and FB have tagged trump Posts 61 times
Foreign media: conservatives who claim FB and twitter are censoring are flocking to Parler, who invested in Mercer
Hot news this week
Apple store staff committed suicide due to work pressure?
The news said that Iqiyi lay off 20% -40%! The official responded: no deny
Xiaomi has issued a patent for autonomous driving, which can automatically adjust its driving ability according to the road class
In violation of prudential rules, a Bank of Beijing Shanghai branch was fined 500,000 and two of those responsible were banned from business
Explosive people exposed a domestic super high flagship! Mobile phone designer encounters information bombing
Dialogue Jiuhe Creative Wang Xiao: The Venture Fund is excessively pursued, it is difficult to reward | next five years
Jiangsu Bank's Beijing branch was fined 4.9 million for "seven crimes" involving the illegal issuance of loans
More than 20,000 domestic Model Y "broken shaft" recalls Tesla's ability to dump pots surprised netizens
Huawei has released a patent on the packaging structure that solves the problem of black spots on display panels
TSMC Samsung and more than 150 other semiconductor companies submit chip confidential data U.S. statement: Very satisfied
The most popular news this week
79-year-old man takes delivery of sudden death wife openly doubts Deppon: claim 500,000!
Huawei's new PC processor exposure! Completely replace Intel/AMD
Is the Hongmeng system?
During the year, the stock price fell by more than 70 percent, the market value evaporated by $200 billion, Duan Yongping "copy bottom" more than
A large number of buyers in the United States cash in full to rob the house netizens commented that Musk sold the last property
"AI First Stock" Tong Technology will launch a IPO tomorrow, raising up to about HK$6 billion
Huawei Hongmeng OS new batch support model exposure: has reached 141
Vivo provides extra screen space for expandable screen phone patent application
Over 300 million units per year for the first time? Apple is reported to have boosted iPhone shipments by 30% in the first half of next year
The first reel folding screen two-in-one mobile phone exposure: Huaxing Optoelectronics