Foreign media: conservatives who claim FB and twitter are censoring are flocking to Parler, who invested in Mercer

According to foreign media reports, fox commercial TV host Maria Bartiromo announced that she would no longer use Twitter two days after the US election. She posted a link to an article on twitter, falsely claiming that Democrats were trying to steal election results. Twitter hid the article behind a tag, warning that it was misleading. Twitter also informed Bartiromo that a complaint had been made about her account (although the company did clarify that she had not broken any rules and that no action had been taken against her).

Parler was founded in 2018, Self-styled "the world's premier platform for freedom of speech ". Saturday, Parler CEO and co-founder John Matze said, An early investor in the private company was Rebecca Mercer (Rebekah Mercer), Her father and hedge fund billionaire Robert Mercer (Robert Mercer) have been supporters of President Trump, And a major contributor to the conservative cause, Steve Bannon. of Breitbart News and former White House strategists

"John and I started Parler to provide a neutral platform for free speech ," Rebekah Mercer wrote on Saturday. She went on to condemn

The company has few restrictions on what users can publish. This makes it attractive to high-profile conservatives who claim that Facebook and twitter are censoring them, although there is no evidence of systematic anti conservative bias claims.

In the weeks before and after the election, Facebook and twitter stepped up their crackdown on misinformation. They have removed groups, alerted posts and reduced the spread of the most shocking false claims of voter fraud.

"Part of Parler's success is because people understand that they are being censored," Bartiromo said, while interviewing Matze on her show. "Are twitter and Facebook going too far?" She asked. "Once you start content planning, you start fact checking, you introduce bias," Matze replied.

The radio host Mark Levin told the audience he felt about the 1.6 million Facebook pages of his fans

Interest in Parler has led to a surge in app downloads

"Our growth is not due to any one person or group, but to Parler's efforts to win the trust of the community, protecting their privacy and making their content transparent on our platform," Wernick said in a statement. However, this is only a small part of Twitter's 187 million daily users and Facebook's nearly two billion users.

Parler's community guidelines prohibit crime, terrorism, child pornography, copyright infringement, fraud and spam. The company said it tried to avoid deleting content or banning users, and said it would not delete or filter content or accounts "based on opinions expressed within the content in question.".

'our goal is not to be a' Wild West 'without rules, but to be a city square for public discussion,' Matze said.

As a result of this lax approach to content control, experts who study online misinformation say false and misleading claims about elections have been pushed to Parler from other platforms.

Among them is the # StopTheSteal tag, which is used to organize protests and perpetuate unfounded claims of voter fraud. Facebook have removed several "Stop the Steal" groups, some of which have accumulated hundreds of thousands of members.

Shannon McGregor, who studies social media at the University of North Carolina at Chapel Hill, says misinformation that has flourished on Parler is something to watch out for. "What we've seen on other fringe or alternative social media sites in the past is that if there are no rules, if it's really isolated, then what happens is that it gets more and more extreme," she said.

This includes gab, an alternative social network that has become notorious for its anti Semitic and white nationalist content. It was used by 2018 defendant shooters at a Jewish church in Pittsburgh.

Despite parrer's rapid growth, McGregor and other experts question whether conservatives with the largest audience will really give up on larger social media applications - even though they are encouraging their followers to do so. "All of these people have accounts on twitter because that's where journalists are, that's where the media is," McGregor said. "If they do leave twitter, their news value will decrease."

"Even senators like Ted Cruz and Rand Paul, who announced (in June and July) that they were going to Parler, didn't actually leave twitter, didn't reduce their tweeting patterns," she said.

She said she expects the series of activities on Parler to continue in the short term, especially as Facebook continues to shut down the stop the steal group. "But it's not clear whether this really represents a massive movement to free up platforms and create a space for social conservatism," she said. 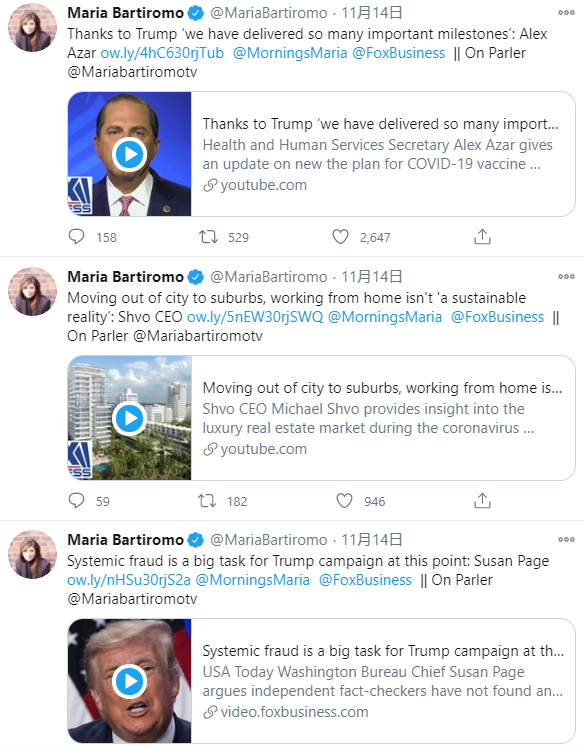 Related news
Foreign media: conservatives who claim FB and twitter are censoring are flocking to Parler, who invested in Mercer
After the election ,1 million Americans left Twitte
Xerox park has accused FB, twitter and snap of infringing several of its patents
Apple and Google are under new pressure to remove Parler from shelves with violent threats
Parler is ready to go offline before Amazon's online service ban
Amazon has asked the court not to order the restoration of its hosting service to the social network Parler
Why did Parler become a gathering place of "Sichuan fans" when the number of users increased by 10 million in one year
Are you looking for real spell caster to bring back your ex
U.S. social media app Parler announced it will enter the NFT space
Hot news this week
"GTA6" was stolen by a hacker without being released. How can the game company defend the source code?
The new rules of Internet popover will be implemented on September 30, and the chaos of "bully screen advertising" is expected to be eradicated
Google is shutting down its Stadia cloud gaming project, with the developers involved saying they had no knowledge of the plans
Brother sent a mobile phone to pay 200 yuan to pay the owner to the police: money is not scraped by the wind
Mate 50 Kunlun version is in short supply! Huawei additional production capacity: October supply can improve
IPhone6 officially "retired", its series sold 250 million units, second-hand purchase price is now as low as 100 yuan......
After a lapse of 28 years, the Chinese women's basketball team won the World Cup runner -up Li Meng's T -shirt on fire
Woman addicted to 'A Sheep' husband worried about being cheated to report for help: official confession
Apple responds to the iPhone accident monitoring cannot be triggered 100%: no minimum requirements are met
Meituan Wang Xing: Chinese auto companies will definitely win, "NIO, Huawei, ideal" will replace BBA to occupy the high-end market
The most popular news this week
The king of mobile chips is laying off 20% of its headquarters
High -tech warm temperature+5 degrees Netease strict coffee carbon kent underwear 104 yuan
Bi Huawei Mate 50 Pro expensive IP14 Plus Tomorrow: 60Hz screen sells nearly 10,000 yuan
Girls walk to play mobile phone hit telephone pole forehead bulge: hope friends learn a lesson
The Snapdragon 8 Gen2 flagship of the Year is here! The standard battery may not even be 4000mAh
Boot up is the new high-end flagship of Android 13 first look: performance is crushed by iP14
Are you enough? Microsoft announced that all compatible users can upgrade win11 2022
American Infrastructure Revival 8000M Fiber Broadband: The same speed, unlimited upward speed, unlimited
Brazil approves Activision-Blizzard deal
Apple doubles U.S. manufacturing: mostly small-scale test production, only Mac Pro assembled in the U.S.