In November this year, Apple launched three new Mac Series in one breath through the online product launch: MacBook Air, 13 inch macbook pro and mac mini. As Apple's self-developed computer chip M1, it naturally became the focus of this upgrade.

That is why such strong M1 chips have attracted software giants to tailor their products to M1 chips, including Microsoft and Adobe、 Tencent.

As the world's leading search engine company, Google will not neglect the M1 chip optimization upgrade of its trump product chrome.

It is reported that,Google released a Chrome version of its proprietary design for apple M1Mac earlier this week.

Recently, foreign media ARS technica has conducted a series of benchmark tests on this version of chrome using speedometer 2.0, jetstream2 and motion mark 1.1 respectively. After the test, it is found that M1 version of chrome is faster than x86 version in any simulation scenario. 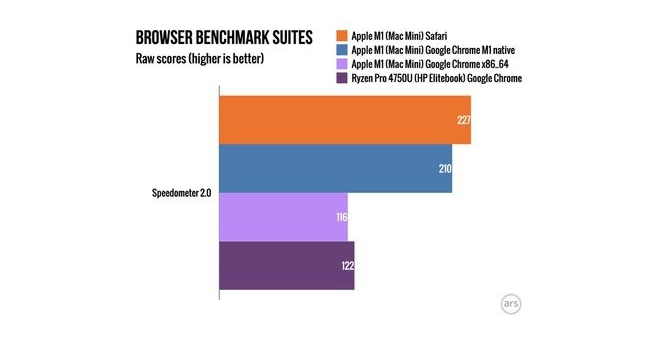 By comparison, the M1 chrome version is 66% to 81% faster than the version running Rosetta 2.

However, Apple's own Safari browser was the first in the test.

With the official release of M1 chip and MacOS Big Sur,The announcement that Apple has completely opened up its own iOS、iPadOS and MacOS three independent operating systems, ushered in the apple ecology