The second half of this year is a bumper year for AMD. Since the launch of the sharp dragon 5000 Series CPU, it has been making great progress all the way. Moreover, it seems that Intel, which has been in turmoil for a long time, can't really enjoy AMD. Therefore, Su Ma's relatively stable video card market has also focused on NVIDIA, which is the overlord. 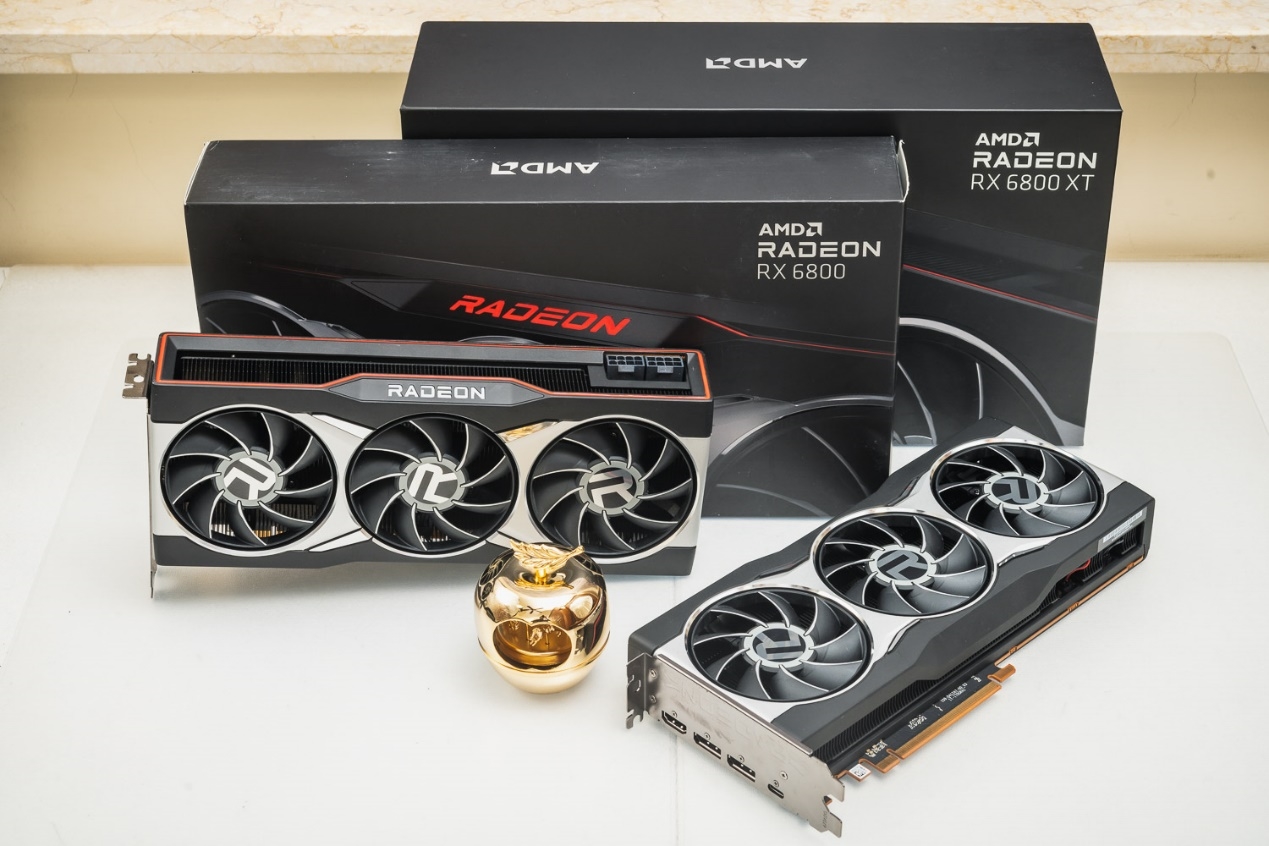 As a new generation of architecture, it is necessary to do some detailed introduction, the details of the specifications are listed in the table below.

This is mainly due to the significant improvement in the structure. This is the transformation of strength. 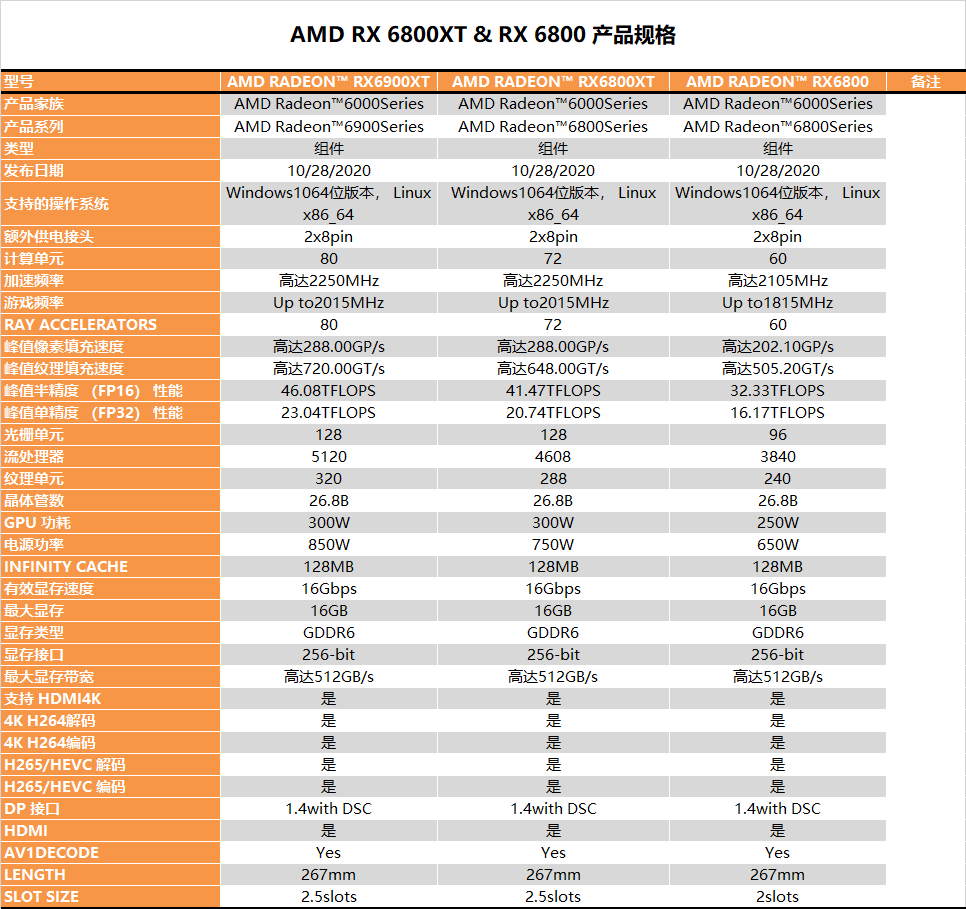 Amd 6000 Series graphics card adopts a new rDNA 2 architecture, which completely eliminates the GCN based stream processor in the previous generation rDNA 1 architecture, and makes a great improvement on the front-end.

Here to find a clear core distinction map, is there a very kind feeling in the picture? Two groups CCX, large and divided into two groups of L3, full of Zen 2 sense of sight.

It seems that Zen architecture not only can be used for CPU, but also plays an important role in guiding the development of GPU architecture. The sharp reduction of the demand for video memory should largely benefit from the experience of Zen architecture in memory call optimization. 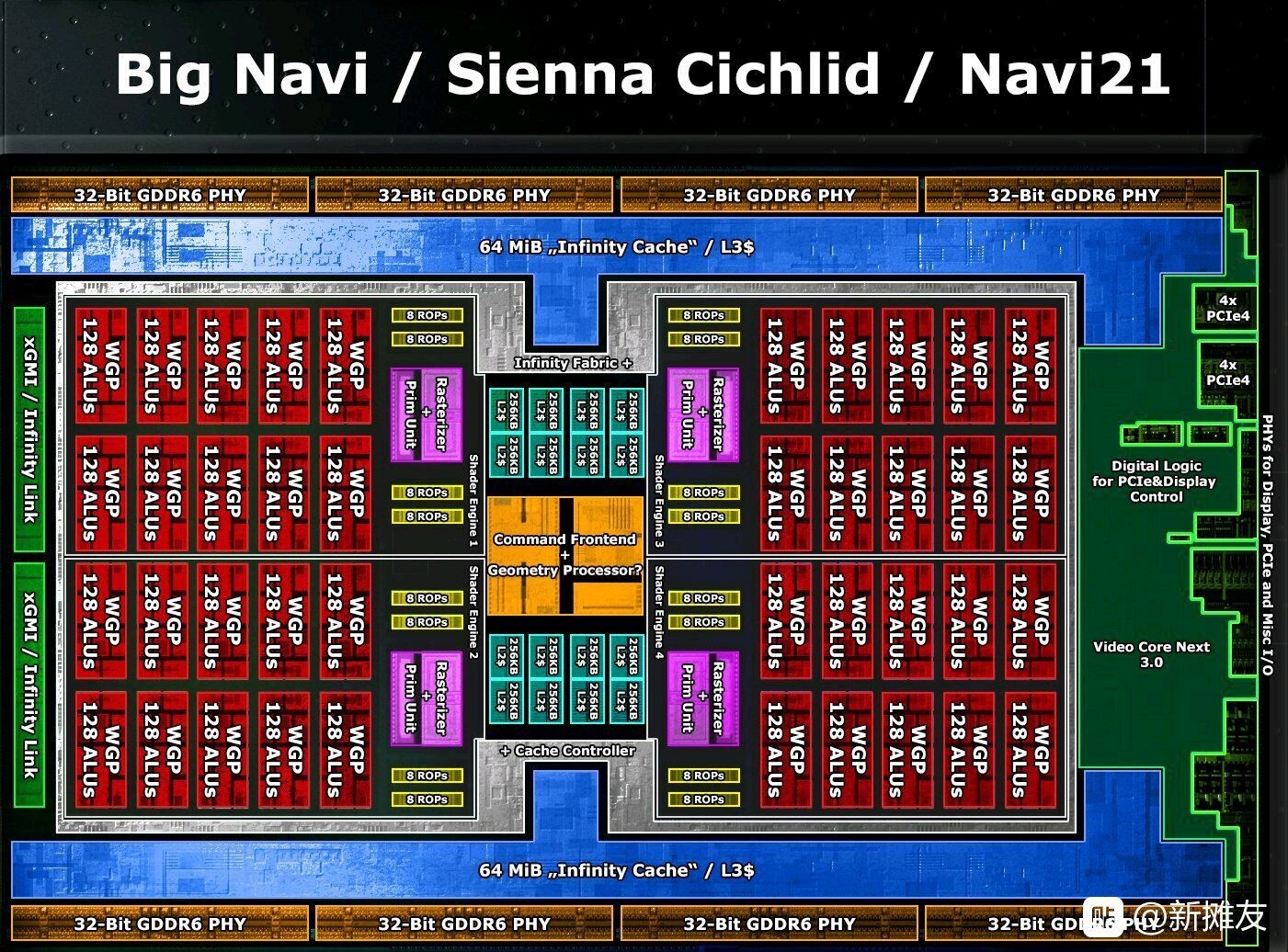 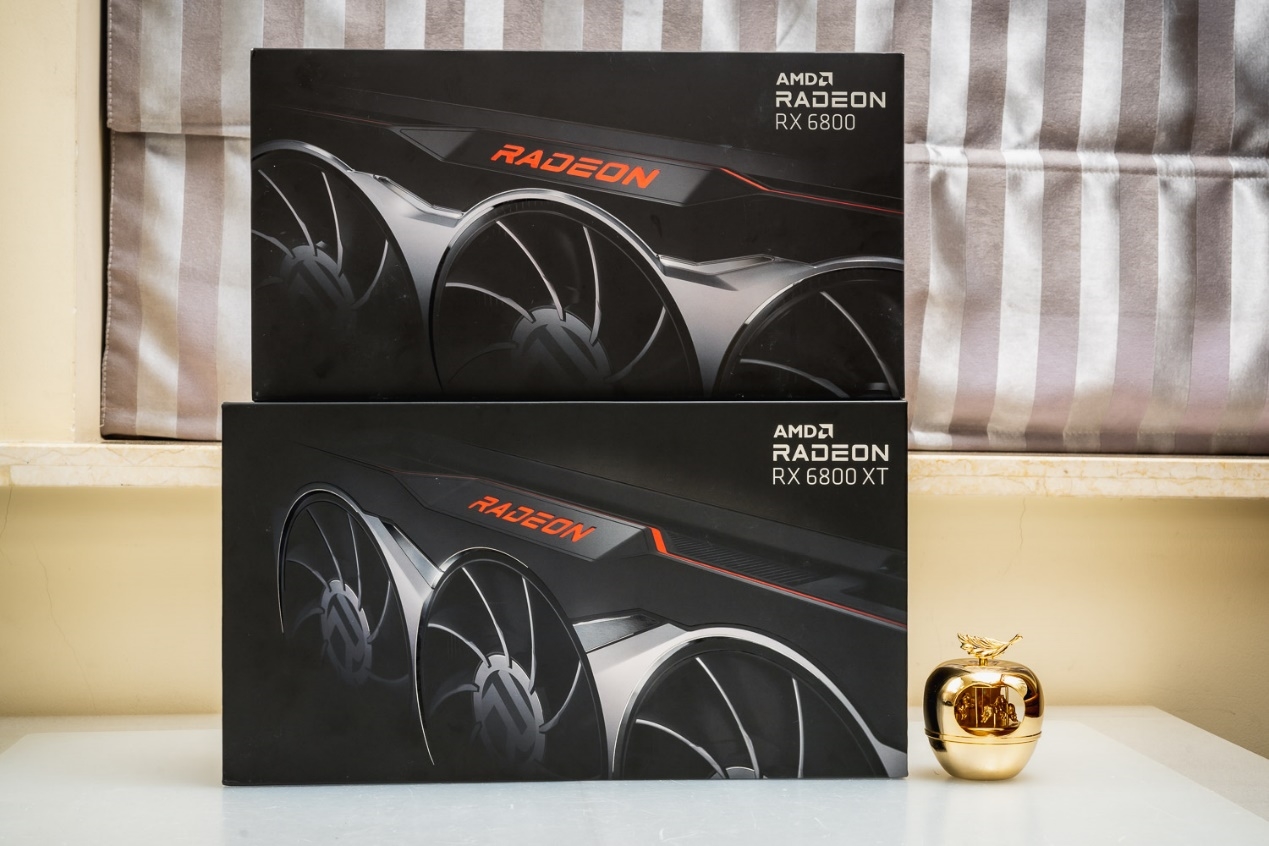 The basic shape of the graphics card is three fan air cooling, and the whole card is wrapped by a metal wind guide cover. 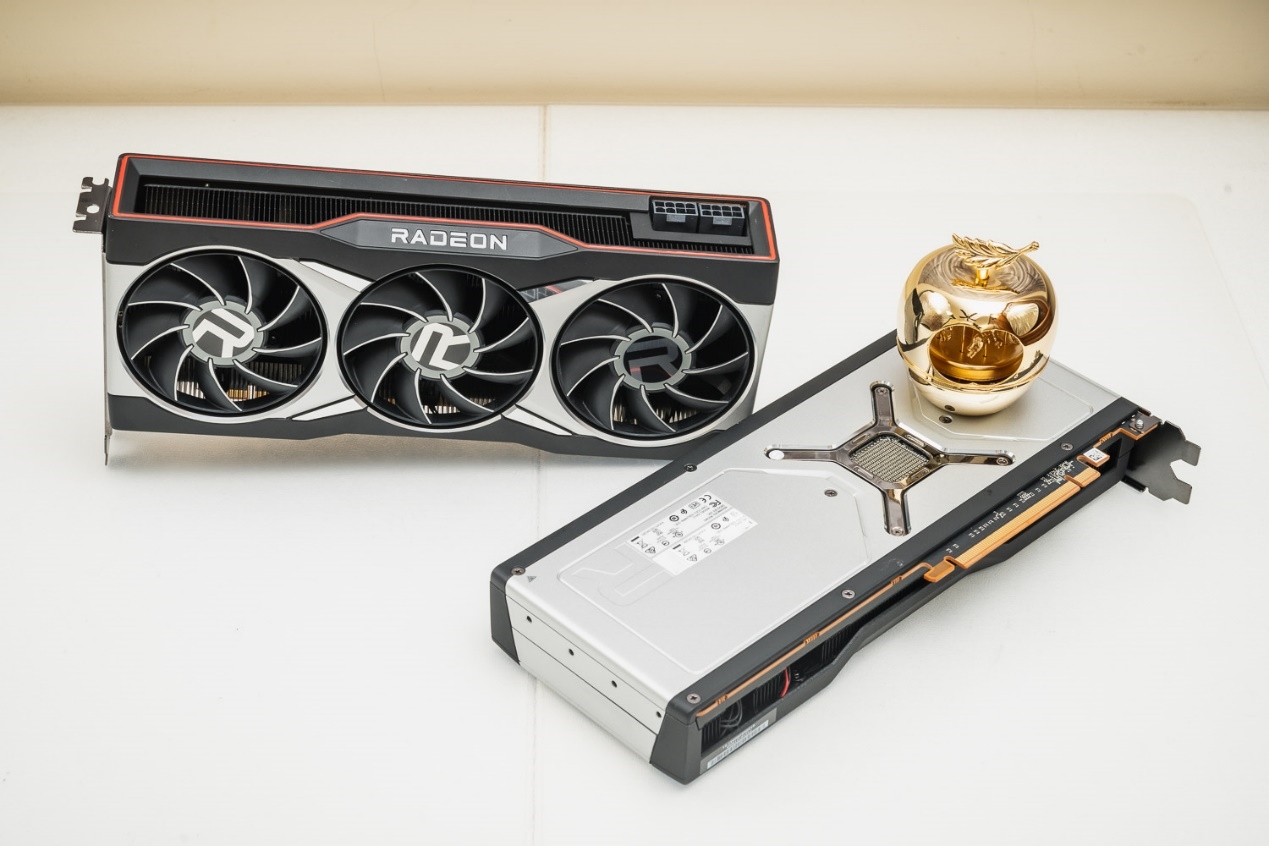 The appearance of AMD RX 6800 XT and Rx 6800 is basically the same mold production, the difference is the thickness of the graphics card.

Here's a point worth mentioning,Because only the upper and lower ends of the video card are perforated, there is a big difference between the actual use and the traditional three fan scheme with air leakage on all sides.

The hot air of the graphics card can be blown out from the upper and lower directions, which is quite friendly to the popular vertical plug graphics card, the glass side plate installation as far as possible to reduce the amount of heat accumulated around the graphics card. 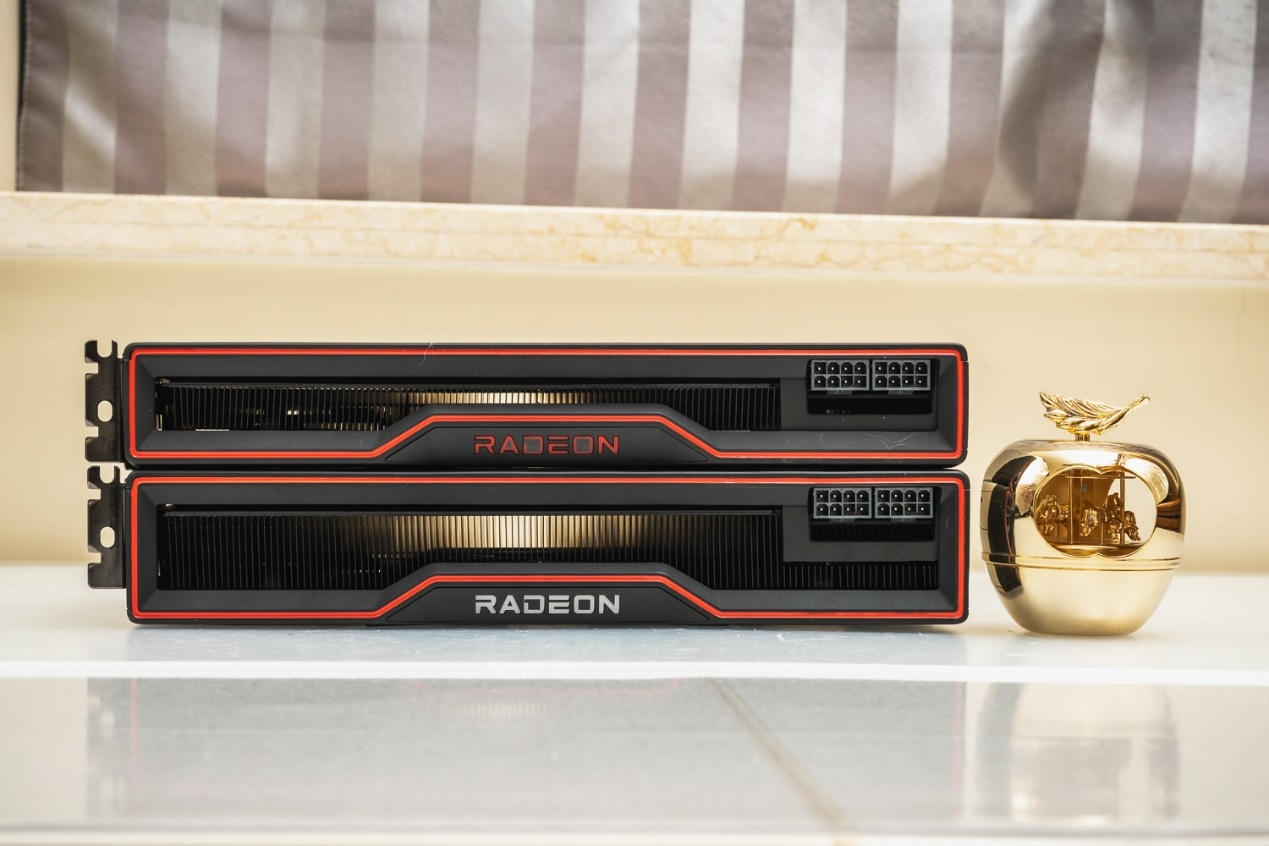 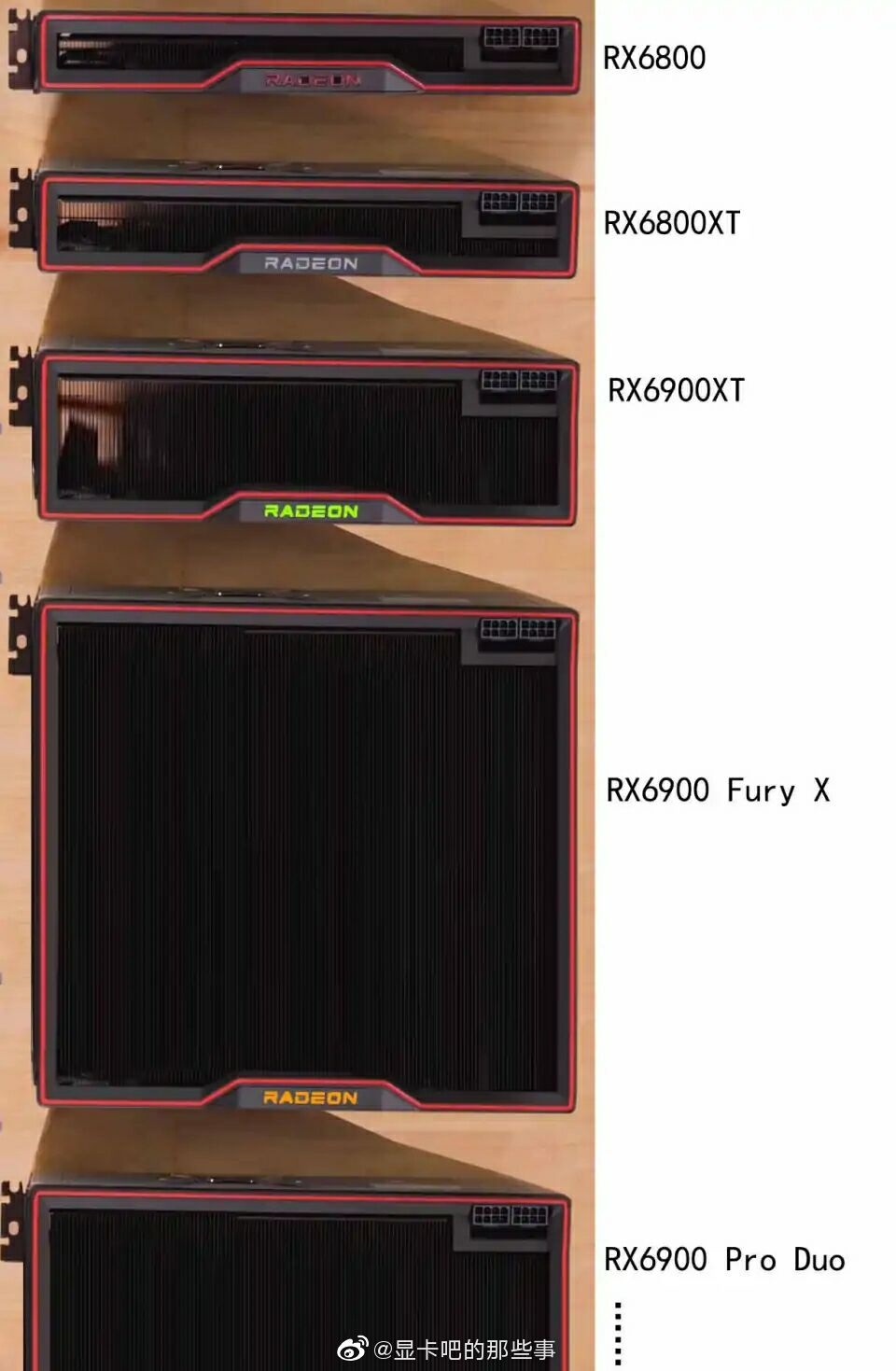 This time the external power supply is unified to 2/8 PIN, from the appearance, the PCB of the two cards is likely to be the same wiring. 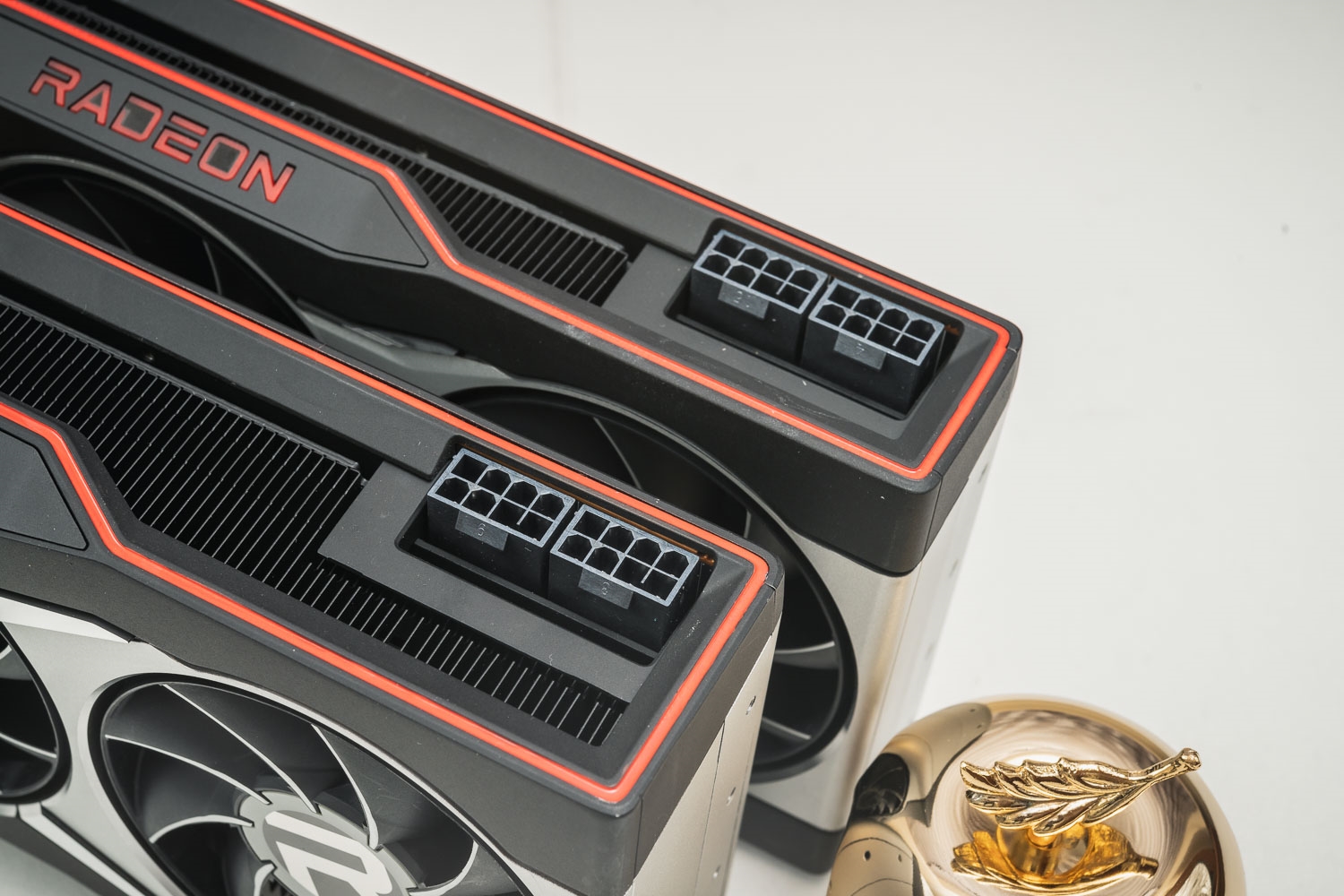 The PCI baffle can be seen different from most graphics cards. In order to better maintain the wind pressure of blowing hot air, the PCIe baffle is also completely closed. IO interface 1* HDMI、2*DP、1*USB TYPE-C. 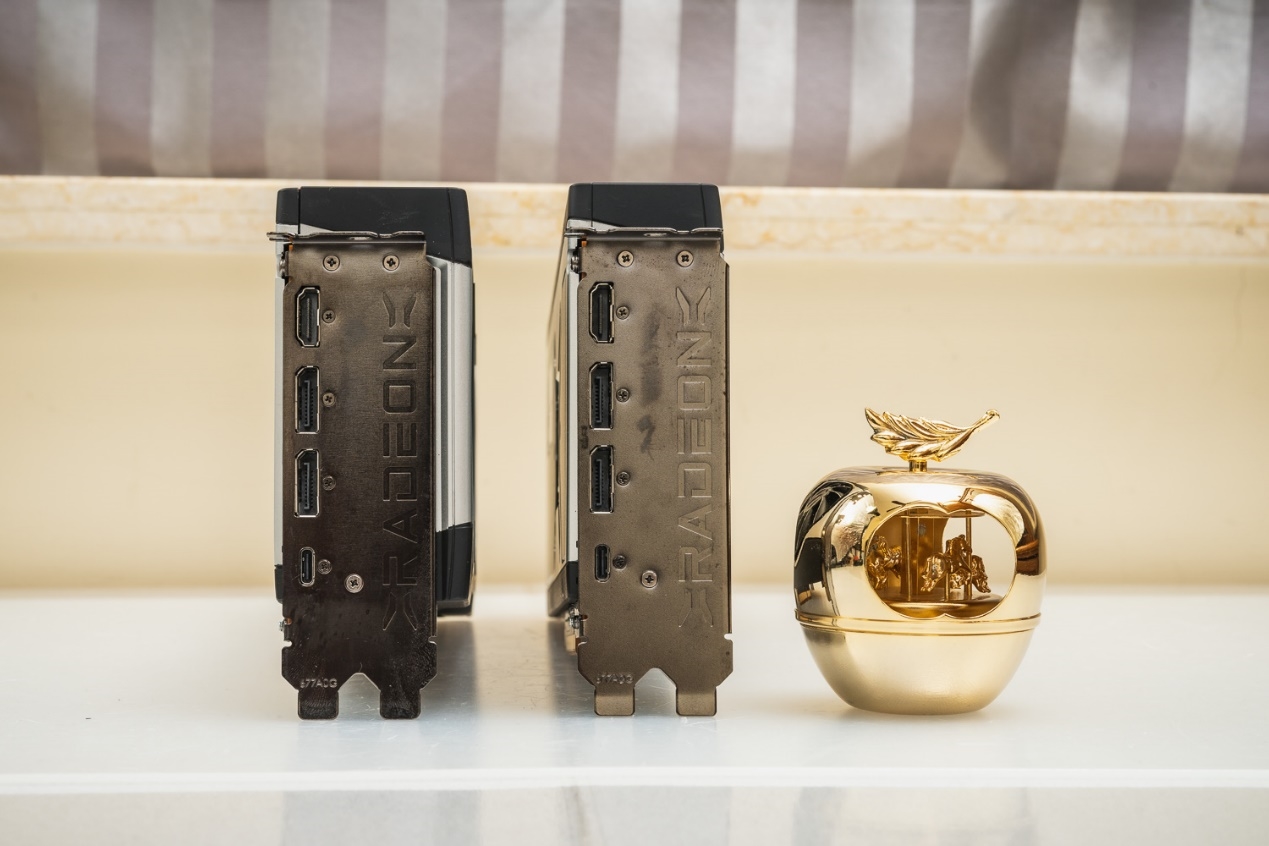 The front end of the video card is also added with a fixing screw hole for mounting bracket. 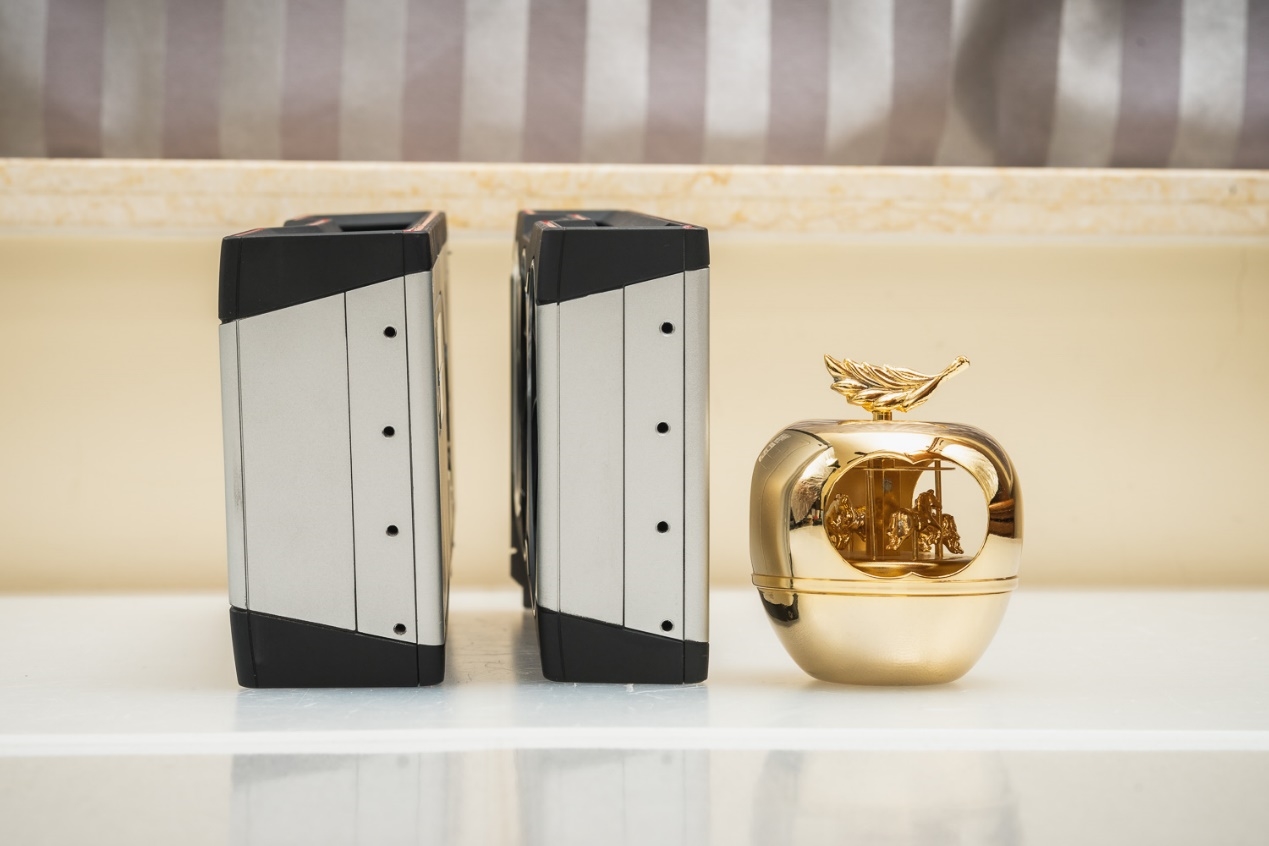 From the previous host parameters, we know that the frequency of this generation of a card can be pulled very high.This MLCC capacitor welded with a piece of tofu is definitely to protect the high frequency. It's like the stack material of ATI public plate. 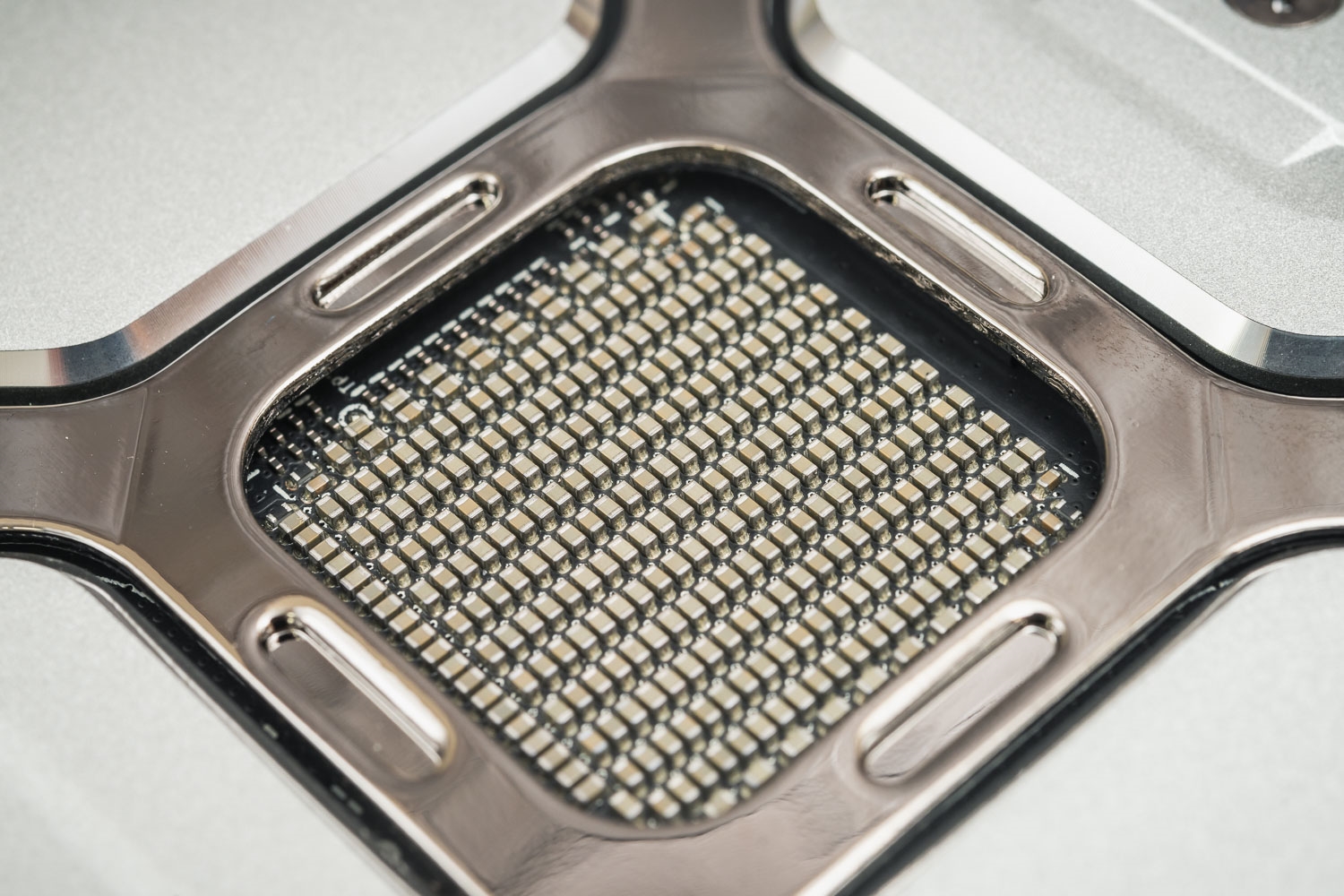 The overall length of the graphics card is not very long ,27 cm length can bring good compatibility. 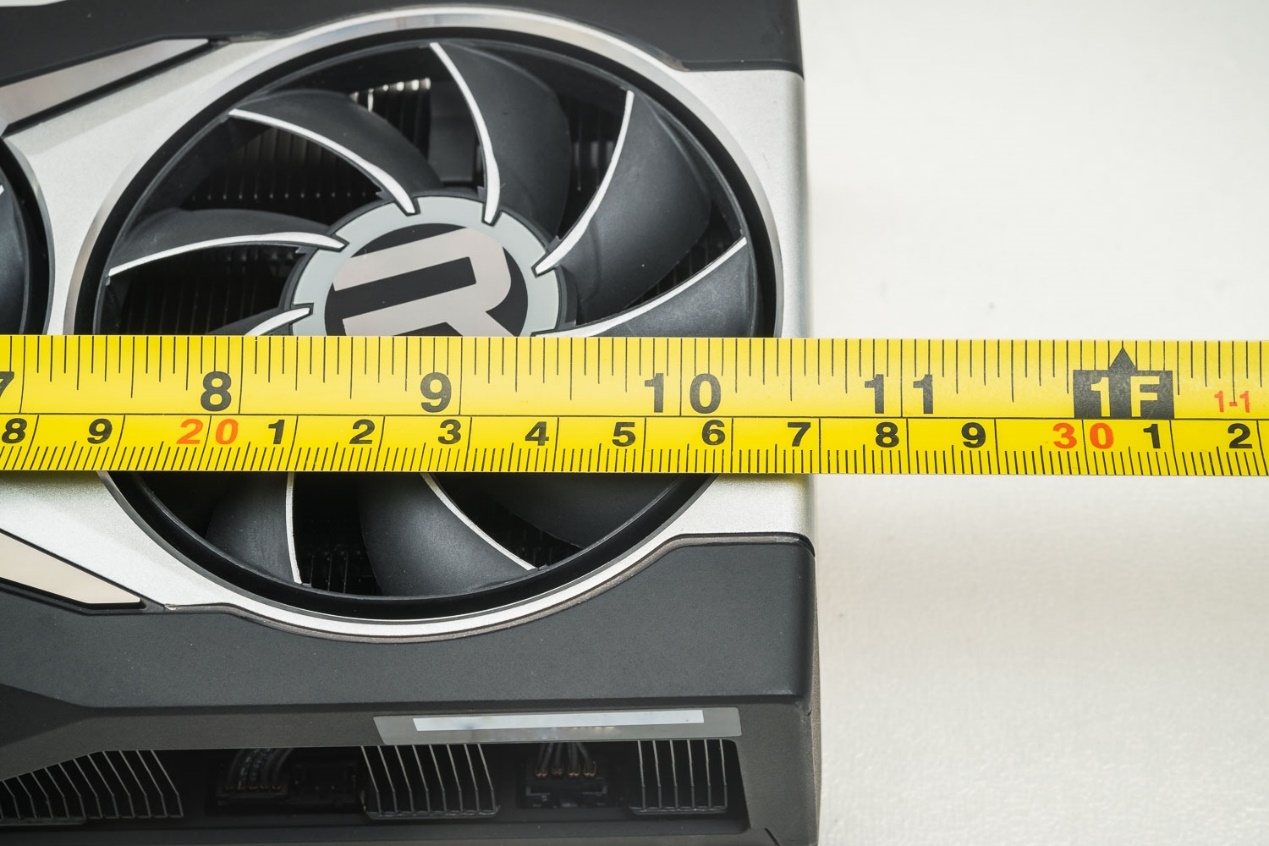 The height of the video card is also well controlled, 2 cm higher than the normal PCI baffle, about 14 cm. 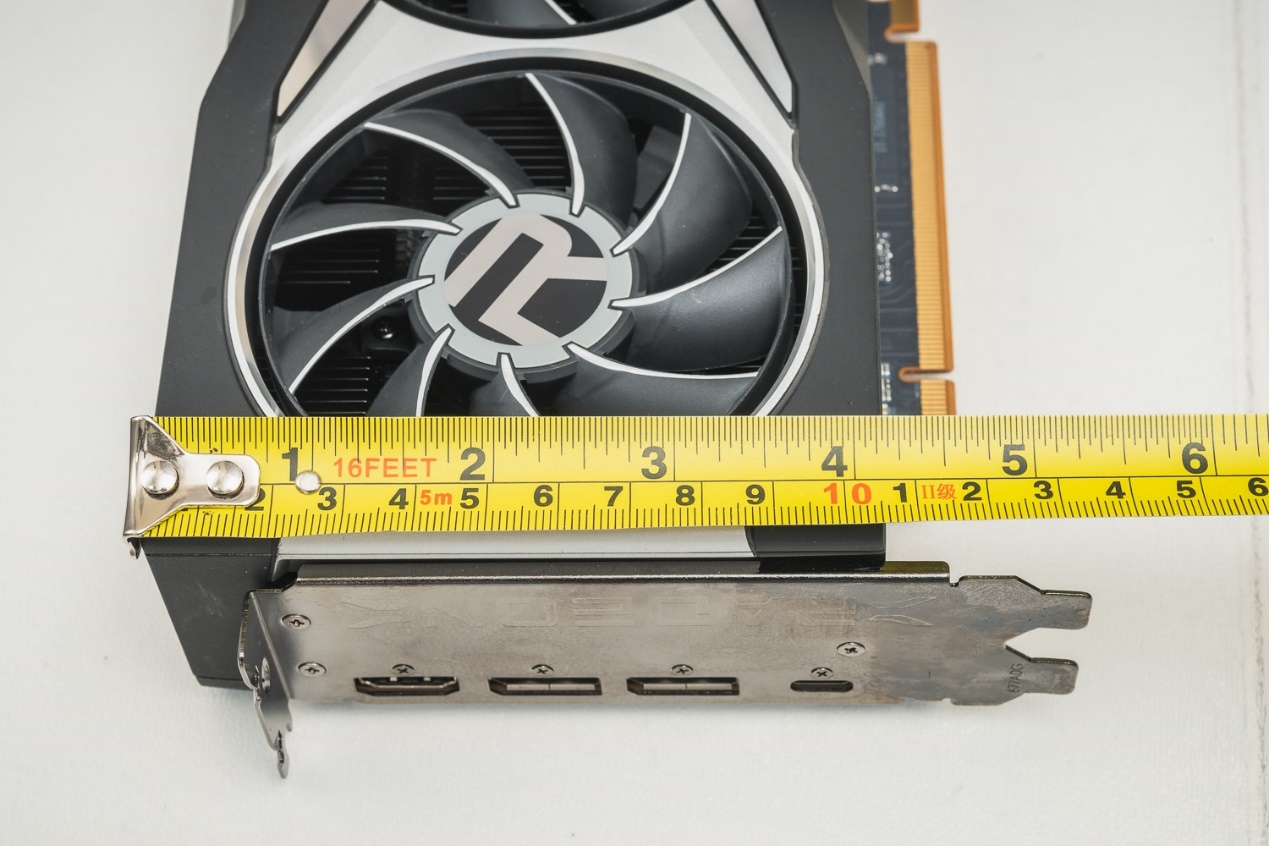 Video card thickness is also very modest, RX 6800 is the standard 4 cm thick double slot, RX 6800XT is slightly thicker than the double slot 1 cm, up to 5 cm, so from the point of view of installation, this generation A card is obviously easier to adapt to the chassis, especially ITX case, if targeted to make good use of the graphics card up and down blowing characteristics, the whole machine will also be better than the general open heat dissipation scheme. 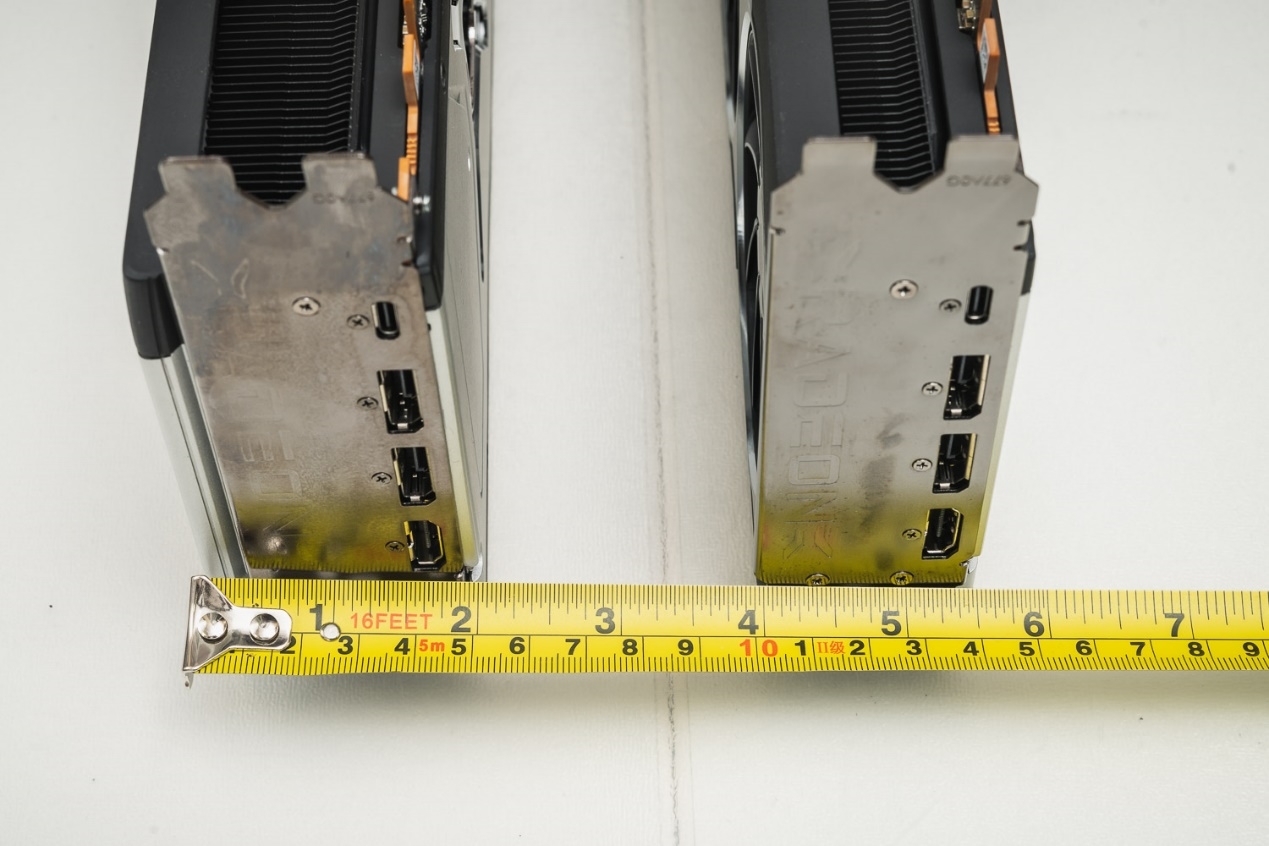 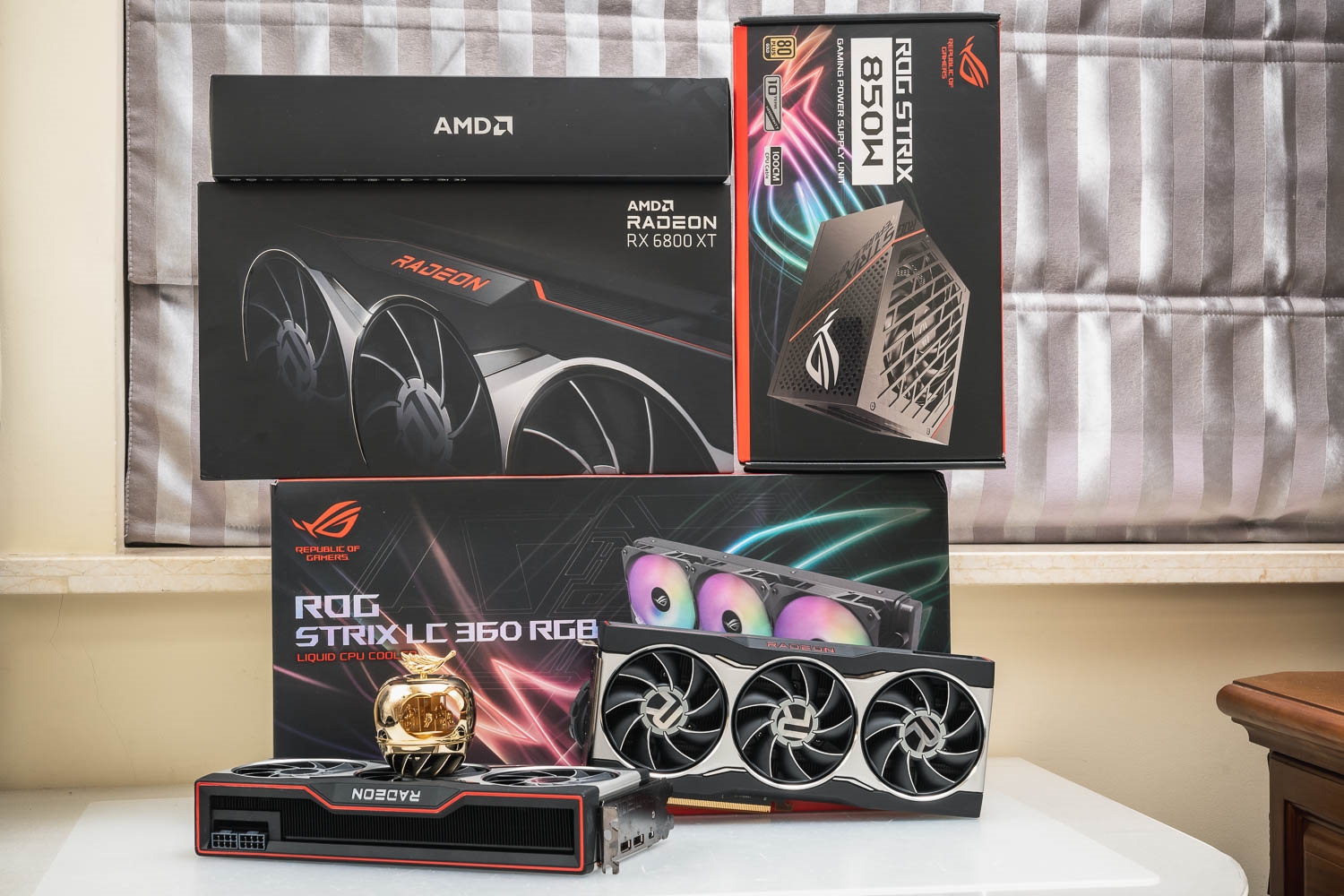 The following is a detailed configuration table of the test platform. 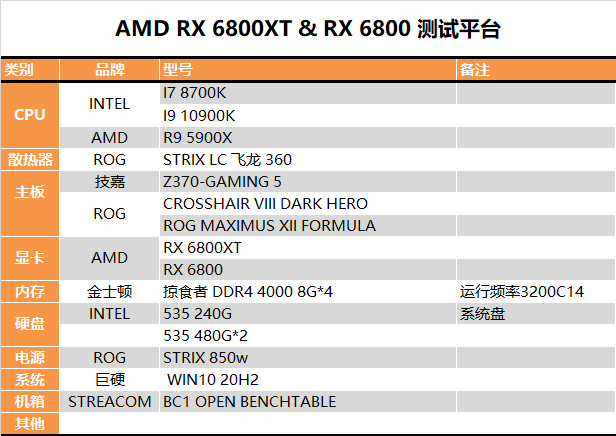 First of all, let's talk about the overall test plan. As you can see from the test platform, this test is much more complicated than before. There are three chipsets in the optical test platform.

- By comparing the details of the three platforms, test the new features of the AMD 6000 series graphics card.

For children's shoes that are interested in further understanding the comparative performance, detailed test data will be provided here. The test can be roughly divided into the following parts: GPU theoretical performance, GPU benchmark test, game performance test, hardware acceleration test, power consumption test. As the old rule, there will be a large amount of data. 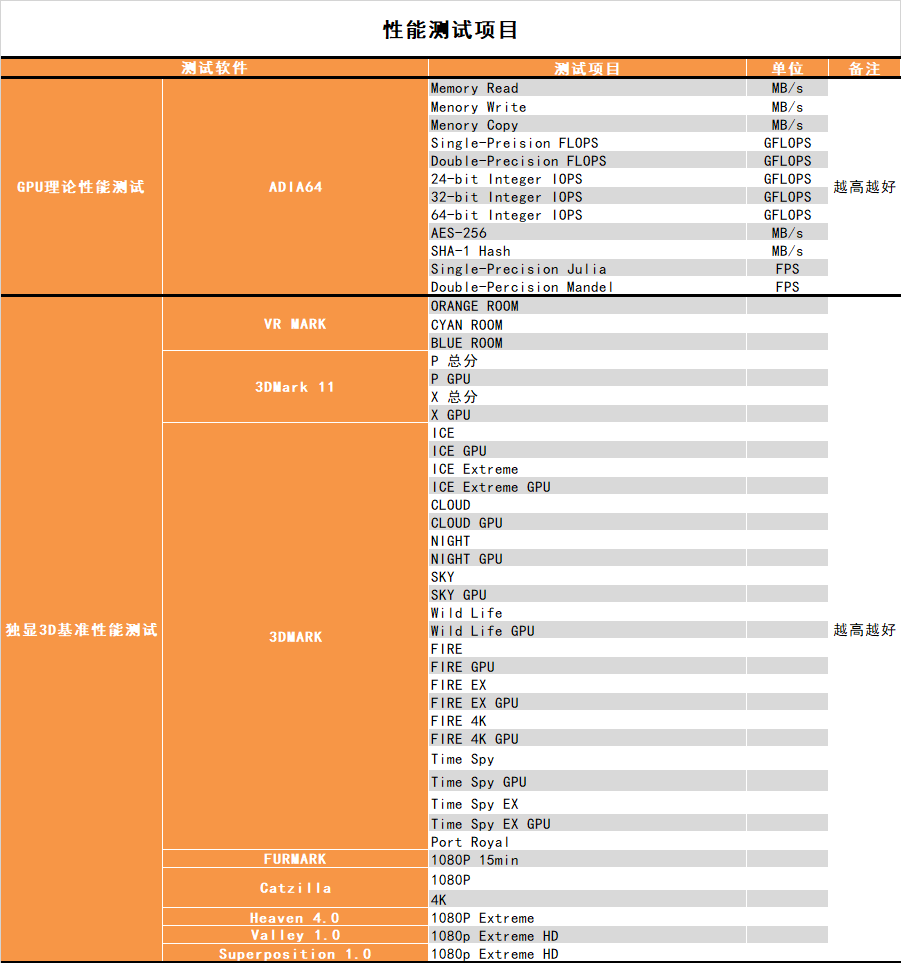 Related news
AMD CEO Lisa Su's higher-end Navi graphics card is already on the road.
The magic of "60"! AMD RX5600XT Depth Assessment
Is there any bragging about the official performance of AMD RX 6000? It was a surprise
RX 6000 video card released tomorrow amd CEO Su Zifeng: can't wait
RX 6950？ Amd still has top strategy?
70 in one shot! Amd RX 6800 / 6900 series
RX 6800 depth test: Su Ma takes the AMD to the top!
RX 6800 can't buy your AMD: return to normal in 4-8 weeks
RX 6800 can't buy it, but it's expensive! AMD: returned to normal within 4-8 weeks
Amd RX 6000 becomes "virtual graphics card": less than 10 pieces delivered in one month
Hot news this week
Microsoft dev version win11 will not be updated next week or prepare for the new version of android app
Nanjing epidemic spread to Beijing ChinaJoy game exhibition emergency announcement: all members can enter
The founder of Ethereum made $1 billion in counterfeit money for charity: it has shrunk to $400 million before it has arrived
In 2021, four of the top ten films at the global box office came from China: "Hello Li Huanying" became the first domestic film at the box office
Kwai tau: magnetic Taurus creates a one-stop marketing solution for electric business. Taurus service providers offer four incremental values.
Ticket skipping 14 years of space rescue 8 days Russia's "science" successfully docked with the International Space Station
All the people are chasing the same champion! Sales of "lucky hair accessories" of Yang Qian on JD platform increased fourfold
Microsoft: win11 is very popular and the official version will be released as scheduled in the autumn
Jingdong healthy skin repair center went online to help promote the diagnosis and treatment standards of burns and wounds nationwide
Amd radeon RX 6600 XT new graphics card debut set off a small climax on the first day of ChinaJoy 2021
The most popular news this week
The configuration requirements of the seventh legend of the fairy sword and the fantastic Xia are announced: the opening light needs RTX 30 series graphics cards
The game "spiritual opium" was quietly restored by the central media: delete the words "electronic drugs"!
High play challenge Ruilong 5000 APU limit memory performance delay as low as 42ns
Microsoft 365 Home Edition 50% discount promotion
Japanese professor artificially made variant delta virus: more deadly
What is COVID-19's breakthrough infection? Expert: the vaccine protection rate is not 100%
Scientists have confirmed that the ramda strain is more infectious: it can also reduce the protection of the vaccine
Bid farewell to the difficulty of choice. Suning Tesco has a better reputation than parameters and prices
Baidu announces energy conservation and emission reduction report card: help the transportation industry reduce carbon emissions by 10 million tons per year
Who says that only young people love secondary culture? Grandpa and grandma wear Hanfu to play games