Despite more than 100 million downloads, Google pulled the popular third-party SMS app off the shelves immediately after security researchers disclosed the privacy vulnerabilities of the go SMS Pro app.According to the report, there is a vulnerability in GP SMS Pro that can be exploited by attackers to access users' images, videos, audio and other media files. But before the official exposure to the outside world, researchers have routinely given developers months of repair time. 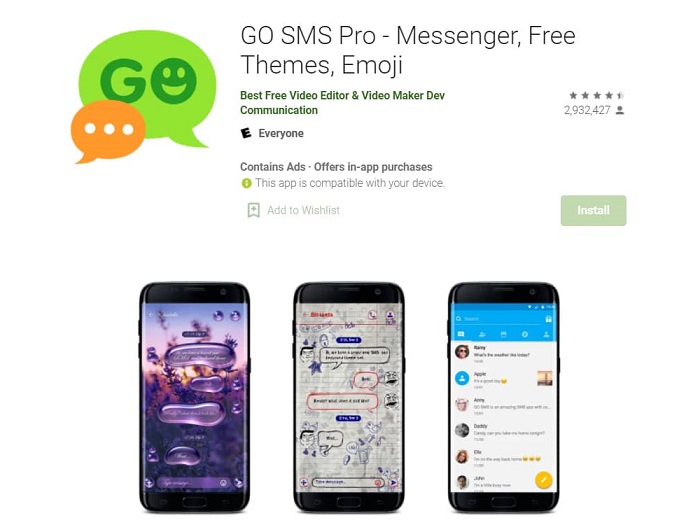 This version of trustv91.7 seems to be vulnerable to security vulnerabilities. When the conversation between users is displayed in the app, the non user will get a link to display the content of the message.

Even messages sent between two go SMS Pro users can be presented as links. Unfortunately, users simply can't determine if their information has been stolen.

Related news
After the CEO was hacked, Twitter disabled the ability to post tweets via SMS.
Twitter announced that it had shut down its original SMS service in most countries
Go SMS pro, a third-party SMS app removed from Google play store due to privacy vulnerability
Google has released a new version of carrier services, admitting that there is a problem with SMS messaging
Hot news this week
Microsoft dev version win11 will not be updated next week or prepare for the new version of android app
Nanjing epidemic spread to Beijing ChinaJoy game exhibition emergency announcement: all members can enter
The founder of Ethereum made $1 billion in counterfeit money for charity: it has shrunk to $400 million before it has arrived
In 2021, four of the top ten films at the global box office came from China: "Hello Li Huanying" became the first domestic film at the box office
Kwai tau: magnetic Taurus creates a one-stop marketing solution for electric business. Taurus service providers offer four incremental values.
All the people are chasing the same champion! Sales of "lucky hair accessories" of Yang Qian on JD platform increased fourfold
Ticket skipping 14 years of space rescue 8 days Russia's "science" successfully docked with the International Space Station
Microsoft: win11 is very popular and the official version will be released as scheduled in the autumn
Jingdong healthy skin repair center went online to help promote the diagnosis and treatment standards of burns and wounds nationwide
Amd radeon RX 6600 XT new graphics card debut set off a small climax on the first day of ChinaJoy 2021
The most popular news this week
The configuration requirements of the seventh legend of the fairy sword and the fantastic Xia are announced: the opening light needs RTX 30 series graphics cards
The game "spiritual opium" was quietly restored by the central media: delete the words "electronic drugs"!
High play challenge Ruilong 5000 APU limit memory performance delay as low as 42ns
Microsoft 365 Home Edition 50% discount promotion
Japanese professor artificially made variant delta virus: more deadly
What is COVID-19's breakthrough infection? Expert: the vaccine protection rate is not 100%
Scientists have confirmed that the ramda strain is more infectious: it can also reduce the protection of the vaccine
Bid farewell to the difficulty of choice. Suning Tesco has a better reputation than parameters and prices
Baidu announces energy conservation and emission reduction report card: help the transportation industry reduce carbon emissions by 10 million tons per year
Who says that only young people love secondary culture? Grandpa and grandma wear Hanfu to play games