On November 26, the Redmi Note 9 series was officially released. In addition to the appearance of a new generation of Note 9 series mobile phones, Lu Weibing, vice president of Xiaomi Group, president of China and general manager of Redmi show.

As soon as this speech comes out, get a lot of netizen support and expectation.

Today, Lu Weibing said on his microblog that,Today, 13 millet houses in Chongqing and 15 Xiaomi houses in Shaanxi opened together. 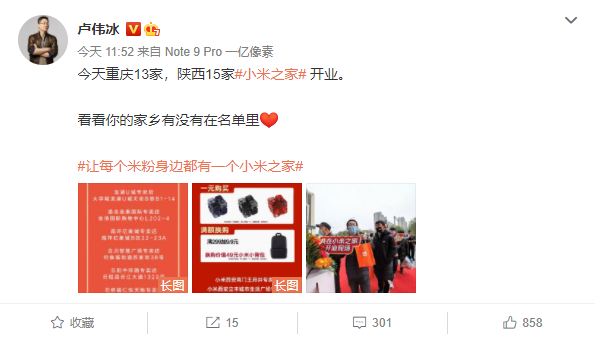 Meanwhile,Today, there are 25 cities in China, such as Suzhou, Guangzhou, Jiaozuo and Xuzhou.

Xiaomi home is the official direct retail experience store of Xiaomi company, which can provide users with product sales, self pick-up, laser engraving and other services.

It is understood that by the end of 2019,The number of millet house in Chinese mainland is over 630.

In addition to increasing the number of stores, Xiaomi also put service quality in the first place.

The shop assistant will send the repair order to the store (no reason to send it back to the store for repair in 8 months) and send it to the store's after-sales service.

At a time when the domestic e-commerce platform business is becoming more and more popular, many voices have predicted that the number of offline stores in the offline market will decrease, and a large number of consumers will meet their needs through online shopping. However, on the contrary, only by taking advantage of the advantages of offline and online can the brand do well.

According to official Xiaomi data, Xiaomi's home is mainly distributed in first-tier and second-tier cities, and for remote areas such as county towns, it also belongs to Xiaomi

The flag set by Lu Weibing this time just wants to solve this problem.

In the future, in all the counties and cities, we will see the figure of Xiaomi's home.

Related news
Today at Apple will add a new AR experience series course
"Vita Jun of primary school students" will visit today at Apple children's programming Laboratory
Apple will celebrate International Women's day through a series of "today at Apple" courses
Apple has launched a new "Today at Apple" program
JOIN TODAY TO ILLUMINATI AND ACHIEVE YOUR GOALS IN LIFE, JOI
A total of 28 millet homes in Chongqing and Shaanxi opened today
Hot news this week
Is Hongmeng OS Android shell? HUAWEI Wang Chenglu: Tucao people do not make complaints about what is open source.
Netizens said that the ps5 host has been cracked: it is able to mine and calculate the power of super high-end graphics card
Tencent publishes the title party recognition patent for the first time: Based on Artificial Intelligence
I'm hiking in the tropical rain forest of China with apple watch, but my sports record is the last thing I care about
Xiaomi's new patent exposure: four shots are distributed in the four corners of the mobile phone, which can realize 3D photography
The internal test of flyme 9 of Meizu 16 series was launched at the end of April: design, privacy and function upgrade
Ma Yun bought the invention of scanning code to pay several 80s will ring the bell: an estimated value of 54 billion
Three years in vain! Sun, a programmer, compensated Tencent 976000 yuan and returned 158000 yuan for violating the competition agreement
Tencent document online mind map and flow chart, using structured thinking to achieve information management
This year's first big West Mercury show will be held on the 6th! Feel the true face of the smallest planet in the solar system
The most popular news this week
Samsung has registered "Galaxy Z" trademark
Huawei's cheapest real wireless noise reduction headset freebuses 4I first sale today: 449 yuan
The report said that Russian intelligence forged news websites to spread the wrong information about the new vaccine
From March 1, will wechat start charging for good morning and good morning pictures? Official response
Do you charge for sending such pictures on wechat? Here comes the official response
150 people have been cut in two years! Google understands how much it costs to play games
Huawei's P50 release time is suspended at the end of April: new tablet comes on stage simultaneously
Linux kernel 5.11.4 release adds support for some mainstream hardware
Samsung releases 2021 49 inch G9 super curved display: upgrade Mini LED screen, double brightness to 2000 nits
Sony drift to PC?