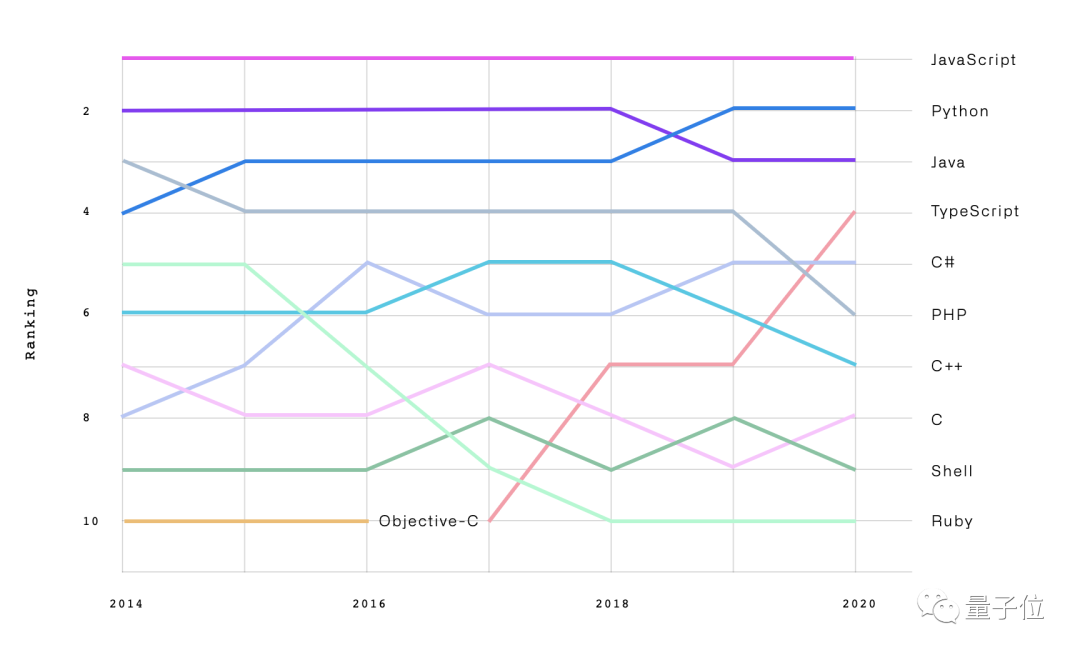 Because the outbreak of the new crown epidemic has a great impact on the science and technology industry, it also gives a special meaning to the report in 2020. From the data point of view, social isolation and working from home do promote the rapid development of open source communities.

Both the number of developers and the number of open source projects created have increased significantly compared with last year. 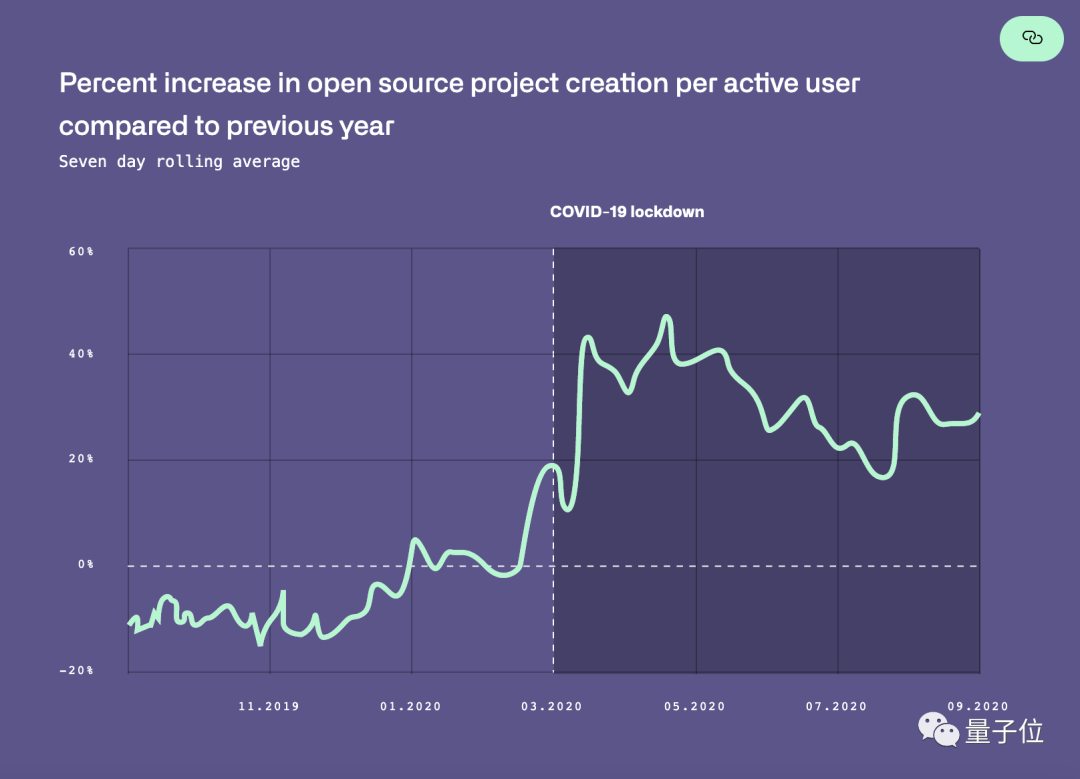 It can be seen that after the arrival of the new crown epidemic, the number of open source projects created by active users has increased step by step, 40% more than that in the same period last year. 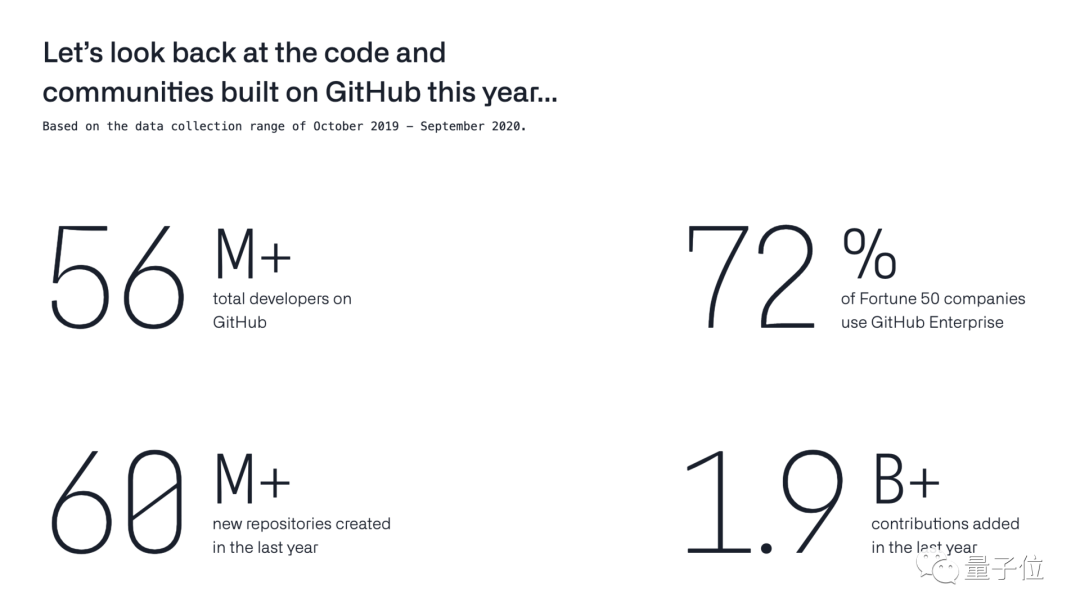 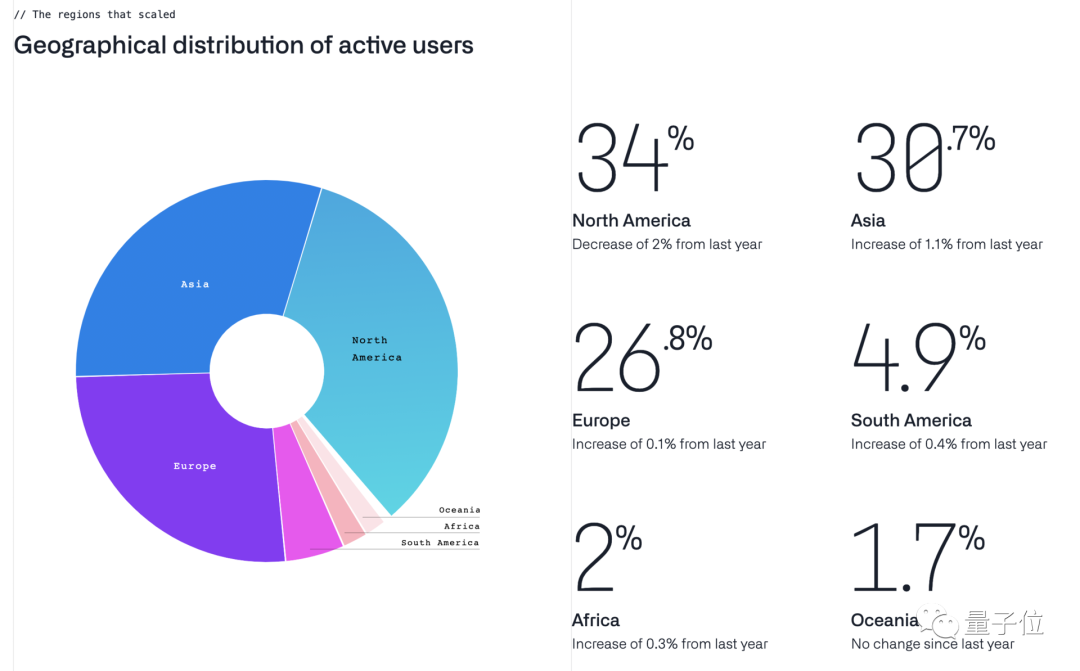 In addition to the above points, the report has a lot to watch.

GitHub has found that tensorflow users are apathetic when it comes to submitting code.

This is mainly reflected in the obvious difference between tensorflow users and other users in using GitHub.

In novel coronavirus pneumonia projects, new and old drivers often have push code in other open source communities. In tensorflow community, this phenomenon almost does not exist, even old drivers do not often push code. 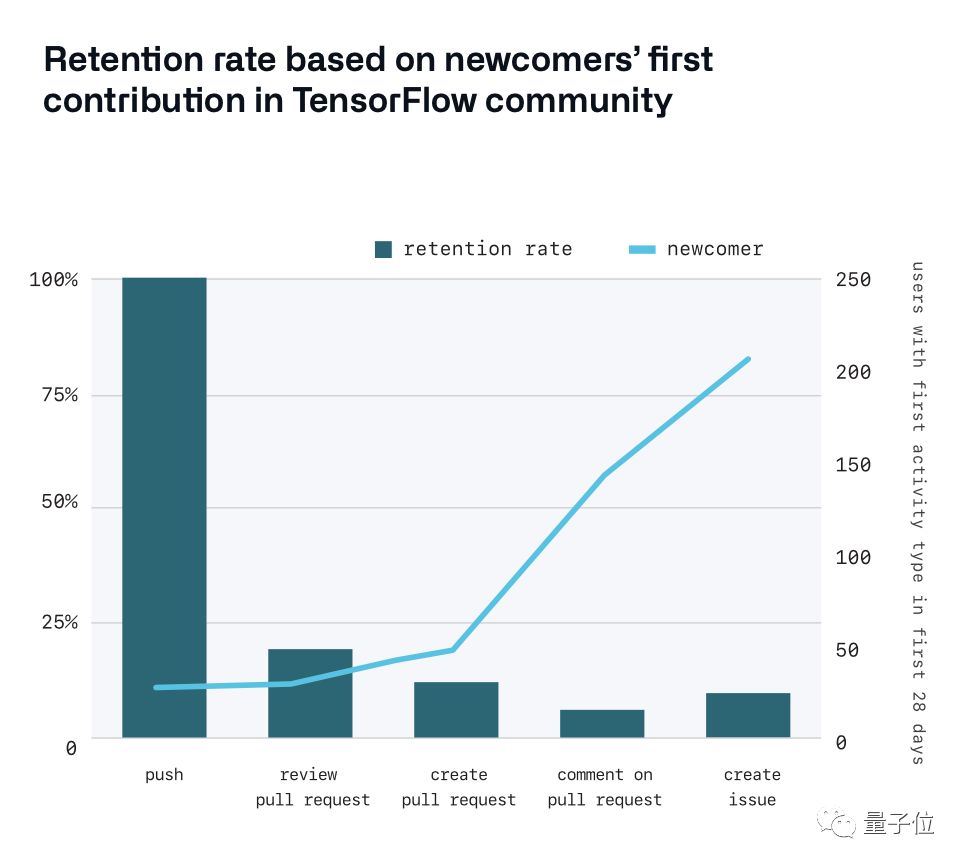 GitHub believes that the main way of tensorflow user interaction is issue.

It is worth mentioning that Asian users have contributed the most to tensorflow project in the past year. 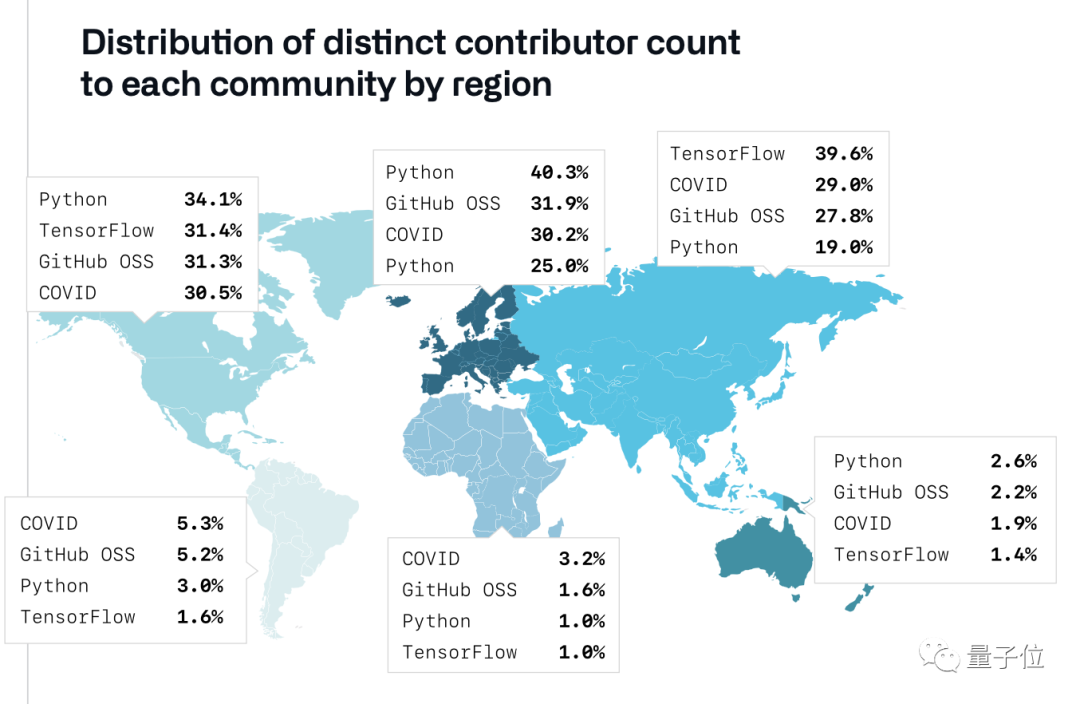 There's also an interesting trend this year: corporate developers' weekend and holiday activity continues to decline. At the same time, there are more open source activities on weekends and holidays.

This shows that programmers are increasingly putting down their work and focusing on open source. 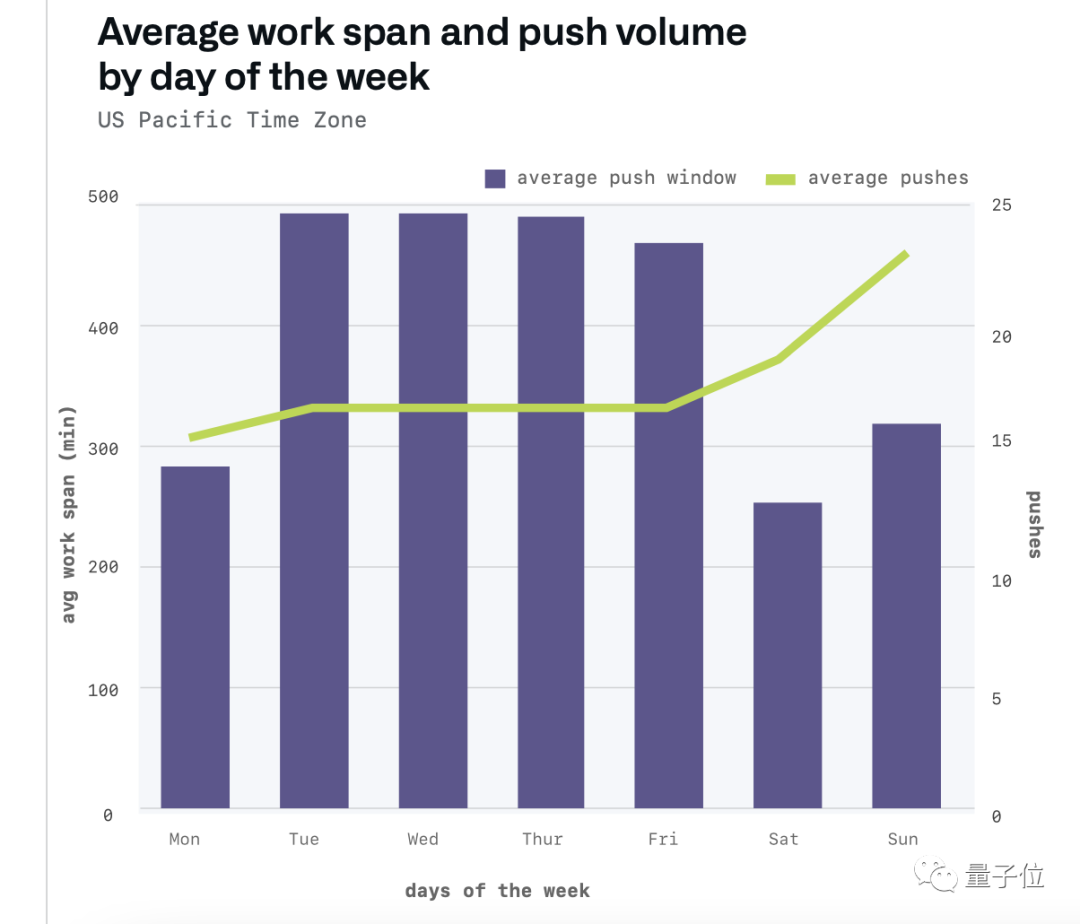 Since April, the number of open source projects has increased by 25% year-on-year.

GitHub believes that this may mean that open source is not only a place for learning and innovation, but also an important place to escape from work. GitHub suggests that companies should ensure that employees have time to participate in learning and allow employees to carry out external projects within the scope of policy.

Developers not only focus on technology, but also show great interest in social topics. By creating the GitHub project, they are keeping a real-time eye on the latest trends of the new coronal epidemic (covid). 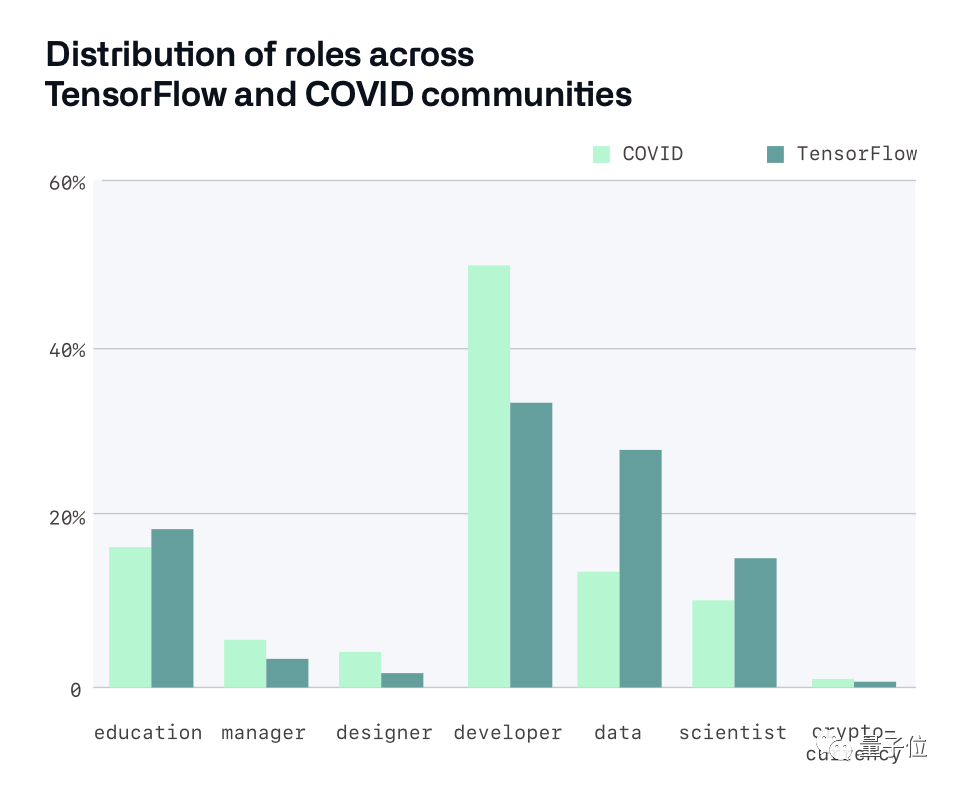 In the covid project, developers make about half of the contribution, even more than the academic and data science users.

Many newcomers registered with GitHub are also on the covid project. In the first month, the number of newcomers in the covid community exceeded tensorflow, but the popularity soon faded. 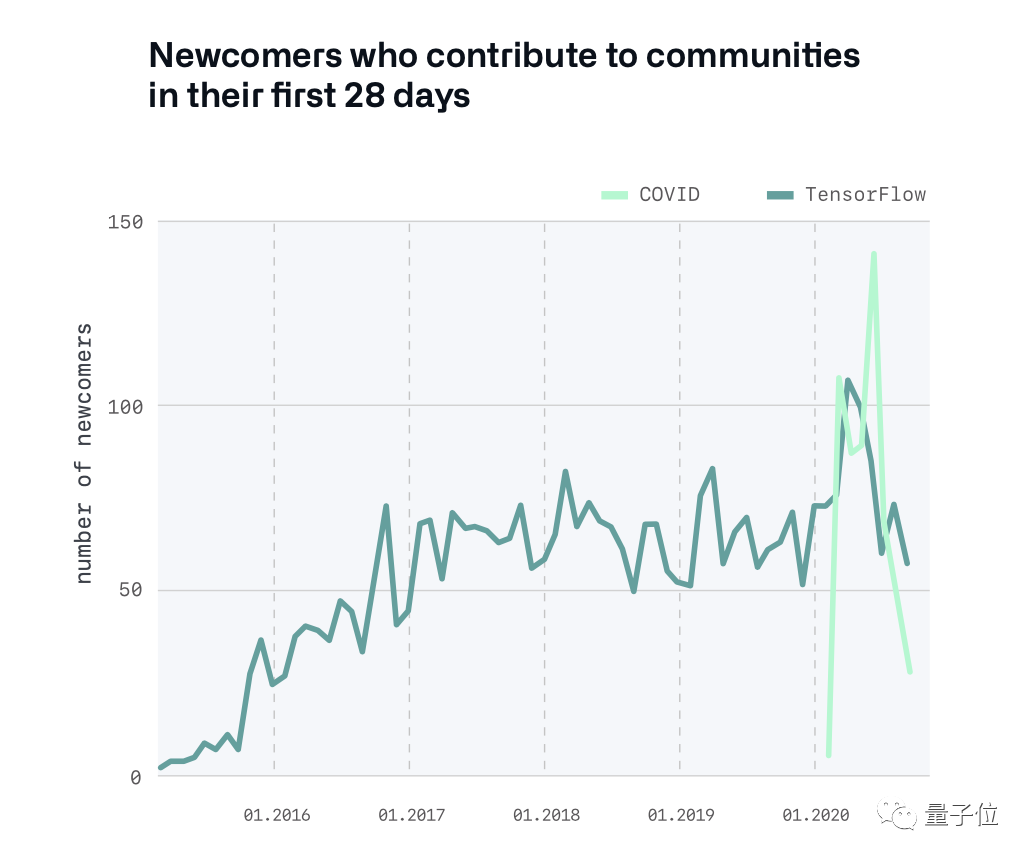 Why typescript is climbing fast

The James Governor, the co-founder of the company's RedMonk, argues that the rapid spread of TypeScript in recent years has satisfied JavaScript developers

Typescript is used by web developers at big companies like slack, airbnb, and Bloomberg. The founder behind angular9, the third most popular topic in GitHub this year, is also a big fan of typescript.

Related news
Google employees complain that TypeScript: type checking is not good
2020 developer survey: typescript beat python, Scala made the most money
GitHub releases annual report: typescript becomes the fourth largest language
GitHub annual report: TypeScript beyond C into the fourth largest language
Hot news this week
Young people can't change their mobile phones one brother pressure in the channel inventory up to 50 million
Chinese mysterious female rich 560 million buy European luxury homes: the full amount of cash is paid at a time
Criminal gang candid courier list takes the money 8 people to be arrested
Do you make feed after Yi Lord? Zhenghong Technology M & A has mystery
The first pop -up shop in the United States opened, Bubble Mart opened the North American expansion plan
The goose factory is finally making a move on the metasverse?
The 560m Chinese woman who bought luxury homes has also been involved in JD.com's investments in Tuniu, Vipshop and Fafa Qi
With this charging treasure that can legal "stealing electricity", I don’t worry about the mobile phone out of power
Son's bet that ARM's listing will boost SoftBank's stock price?
Huawei Hongmeng has become! Many mobile phone manufacturers will follow up with Hongmeng OS technology
The most popular news this week
A large number of QQ numbers stolen official announced the results of the investigation
Tencent said major shareholders will sell their shares for a total profit of about 24.5 billion yuan
Born with a silver spoon in one's mouth, IE finally why can't escape the fate of being eliminated?
The first batch of meizu free battery replacement models are announced: Meizu 15 and other five models are listed
Meizu official celebrate Flyme 10th birthday: More surprises, wait for August
The first batch in the country! "Main Driving Unmanned" Autonomous Driving is approved
IPhone 14 revealed the earliest early August mass production Foxconn a large number of recruitment: on entry to send 5400
700MHz gold band! China Radio and Television wechat mini program launched
China Radio, Film and Television has officially announced that ZTE will be the first group to support commercial 5G broadcasting
Japan's chip industry has a 35,000 talent gap? Tech giants warn