Seeing the apple airpods max, the beats headset on his neck said he was hurt

Apple finally chose to fill the last gap in the earphone Market for airpods: headphones.

Previously, iPhone users who wanted to buy headphones with airpods pop-up windows and noise reduction features could only find them in Apple's "sub brand" beats. 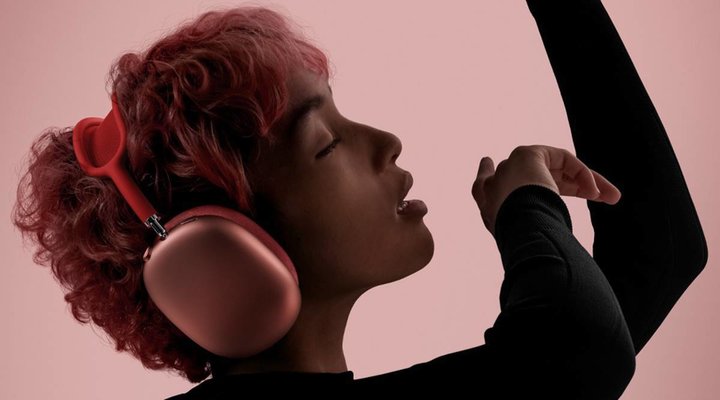 The release of airpods Max broke that. Even if its price exceeds 4000 yuan, the prefix "airpods" has proved its pure pedigree. Naturally, there will be users who give up beats and switch to new headphones. 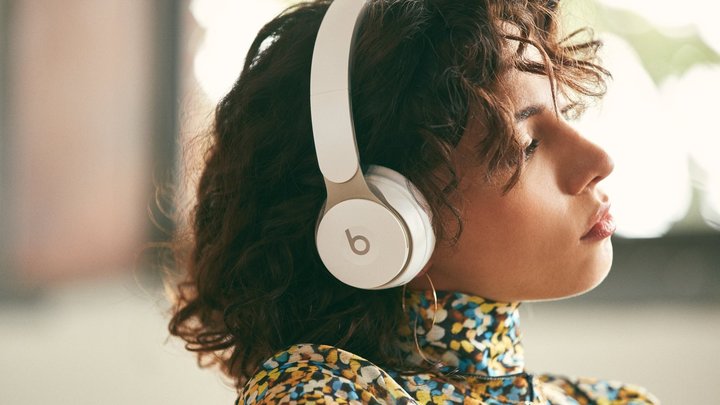 But when beats agreed to be acquired by Apple six years ago and became a subsidiary of the latter, he probably expected such a day.

Beats is still an independent brand. Even though it has been six years since Apple acquired beats, it still has its own official website. You can also buy various new products with "B" in the apple store, such as powerbeats pro and Beats Solo pro.

From the perspective of beats, the ability to use Apple's huge resources and the latest technology to improve its products is undoubtedly the most significant change since it was bought by apple.

This can be reflected from the product level. As of today, most of the wireless headphones and headphones on the beats official website have built-in W1 and H1 chips of the same model as airpods.

With the support of Apple chip, it means that the beats headset can support the pop-up window and second connection with apple devices and voice wake-up Siri like airpods, while other third-party headphones have to go through the Bluetooth pairing in the settings. 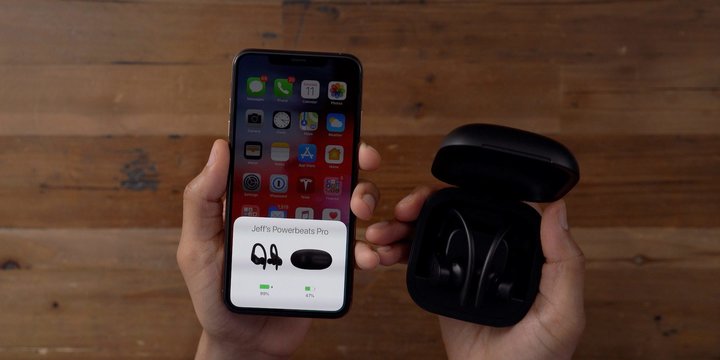 But in the process of introducing Apple chip, the sound quality of beats headphones has also changed. My colleague, Mr. Liang Menglin with golden ears, said that after beats became a "sub brand" of apple, its sound quality became much more neutral

In the past, the high frequency of beats headphones will be more prominent, but there will also be burr and astringency, which sounds rough; although the bass is strong, it will also be boring and uncomfortable. However, since beats x, the sound style of beats has become "conservative" a lot. The sound is balanced, and there is not so much "hit and play" flavor. On the contrary, it has the Apple style of boiled water.

It is an indisputable fact that beats headphones are gradually becoming "apple like". From a product perspective, using Apple's technology can really make beats a better experience on IOS platform. 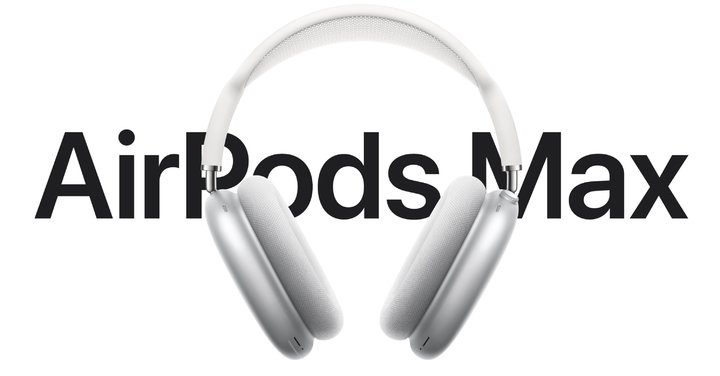 Compared with beats' use of Apple's technology, Apple's "reference" for beats headphones is not much. Whether it's the earliest airpods wireless headset or the latest airpods Max headphones, you can hardly see the elements of beats' past products in terms of shape and design, or even a little bit of beats' shadow.

That's why, over the past years, people have also questioned why Apple should spend $3 billion to buy a trendy brand. At least, we can't directly see the technical power of beats on airpods. 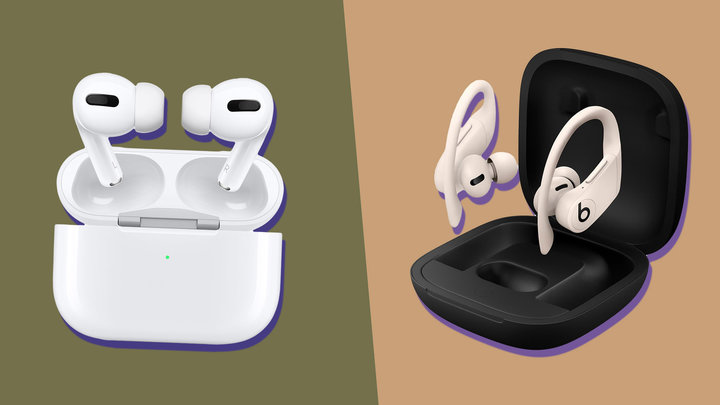 Maybe apple did ask the beats team to assist in the development of airpods and homepods, but there is no way to prove it. At the same time, from a personal point of view, in order to maintain the design consistency with other products, apple does hope that the "biological" brand of airpods conforms to Apple's tonality, rather than mixing the elements of beats.

That doesn't mean beats doesn't have its own assets. Strictly speaking, without beats, many of the apple music hardware and services we see today will not appear.

Looking back at the $3 billion acquisition six years ago, many doubts have been answered. 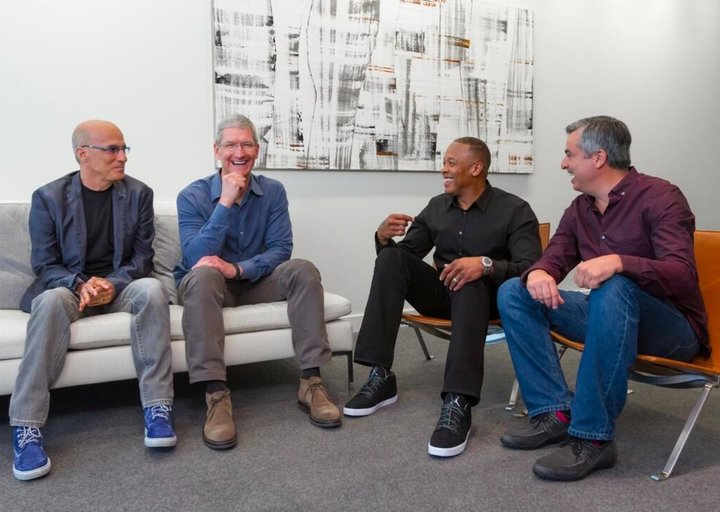 That's what Apple needs: some real "content savvy," savvy people who can deal with a lot of record companies, and insight into the music industry.

2014《GQ》In an interview with Irving, he also mentioned that after the death of Steve Jobs and the rise of streaming music such as spotify, he realized that there was a "hole" in Apple's music business: Apple had deficiencies in copyright and content. And he can help Apple fill that gap. 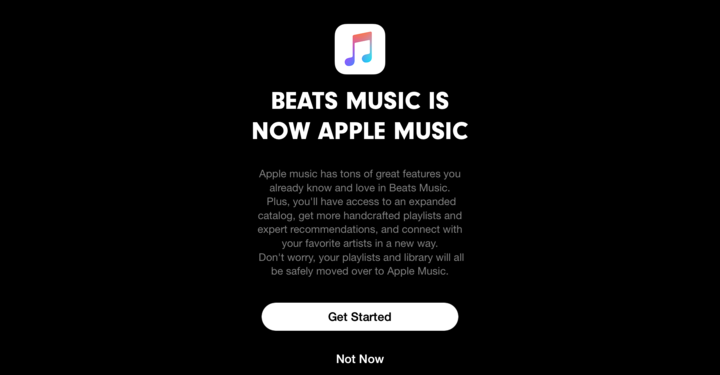 At that time, beats also brought apple the platform it badly needed: beats music. This is a streaming music service built by beats before it was acquired by apple. However, compared with other competitive products, beats pays more attention to manual selection of songs rather than simple algorithm driven, which is also a major feature of beats to build a music service platform.

However, Apple's approach to the streaming media platform is not to continue to develop beats music, but to transfer beats technology to Apple music. We all know what happened later. Just a few months after Apple music went online, beats music announced that it was offline. 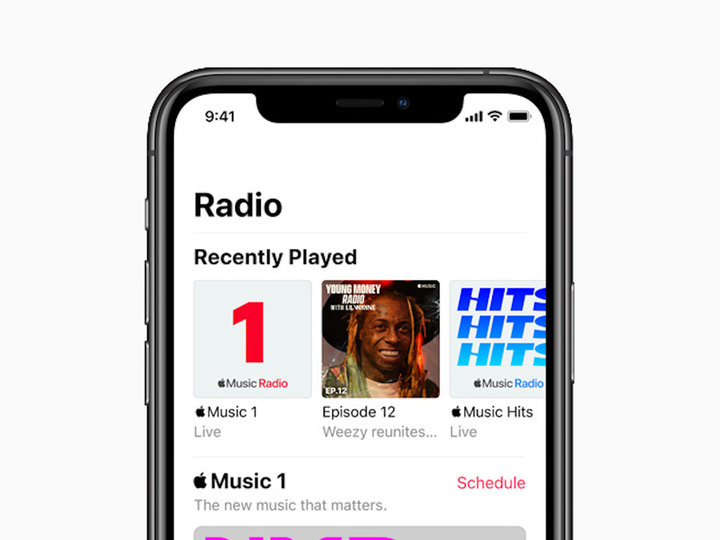 Today, there are not many betas elements left on the apple music platform. Even the beats 1 radio page, which has been in existence for a long time, also put up the apple logo in August this year, which has been changed into "Apple Music 1".

From integration to complete integration, it can be said that every big company will appear after the acquisition.

Headphones are not only functional devices, but also fashion accessories. 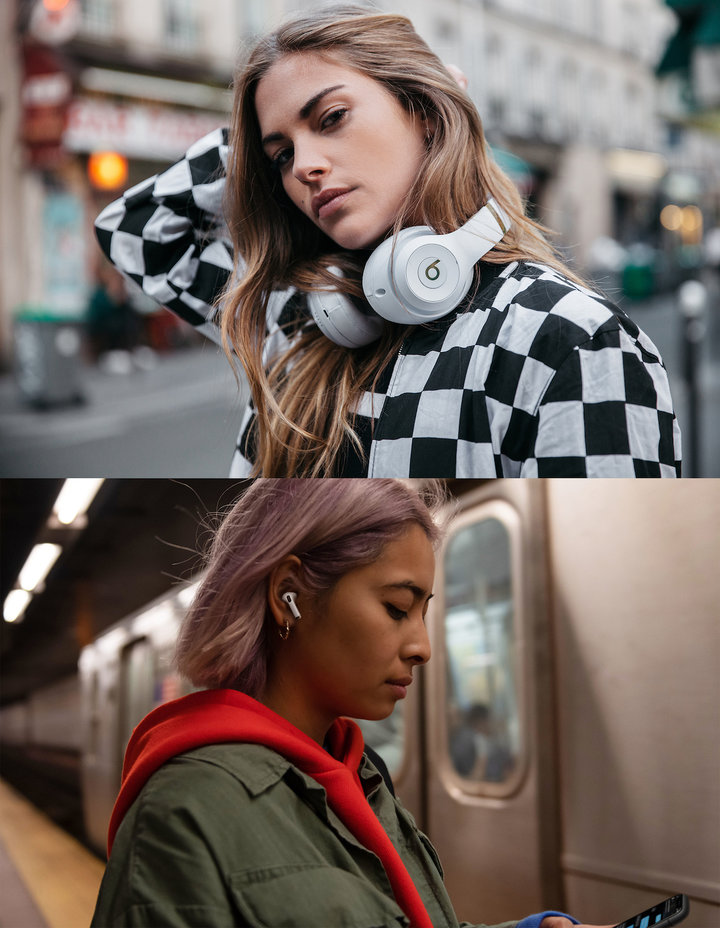 All kinds of famous stars with earphones are just like free implant ads, coupled with the highly recognizable shape of airpods, which constantly strengthens our impression on this product.

It looks familiar, doesn't it? In those days, beats also liked to use this marketing method when promoting its own headphones. This brand heavy strategy may be somewhat ingenious, but it does enhance the influence of beats in the market. Now, it is even more so for apple, which has strong product strength.

In their view, earphone represents not only a kind of technological product, but also an interpretation of cool and fashionable image, and also a kind of "jewelry".

However, in the photos at that time, the earphone we saw was still hanging around the neck. Today, it is the two bright white smears on the ear.

Airpods, a friend of beats or a competitor?

With the booming sales of airpods, the news that beats will be abandoned by Apple has appeared more than once. At the same time, from the signs that apple is speeding up the completion of its audio product line, beats is not as prominent as it was at the beginning.

A very realistic situation is: in the future, if the products of airpods and homepod also develop into the same as iPhone and iPad, relying on the positioning of high, medium and low, and occupying more and more price segments, will there be room for beats to play in the same gear? 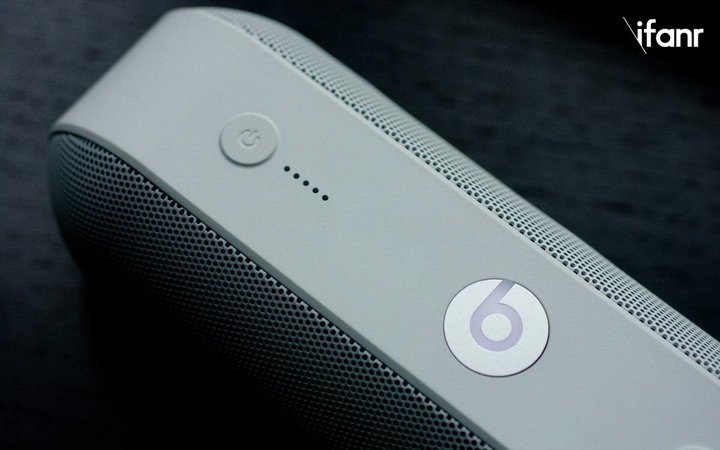 As a result, it seems that it is also a matter of time before other beats products disappear. Beats should be able to predict the outcome at a certain stage.

However, Mr. Liang, a professional audio player, still has different views. In his opinion, although we all make earphones and there are overlapping product categories, the qualitative and positioning of beat and airpods products are still different.

One is the price. At present, the price of beats headset is mainly around 2000-3000 yuan, which is essentially different from that of airpods max at 4000 yuan. I now feel that beats is like a more local and popular brand of apple, while the airpods series is constantly developing towards high-end and professional routes. 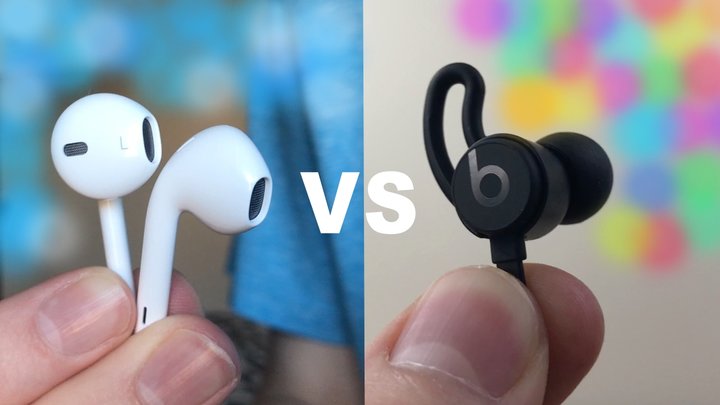 As for airpods and beats under 2000 yuan, the difference between them depends more on different design and functionality.

Airpods and airpods Pro are mainly used for daily commuting, while powerbeats pro with ear hook and enhanced wearing stability is oriented to sports scenes. Although the prices of the two are very close, there are still different user groups in terms of design and function, and product attributes are not the same.

Given that Apple's "I" prefix devices have more than one billion users, this positioning distinction can indeed make airpods and beats live in harmony when sharing a large user base.

However, as Apple's "regular army" products are gradually mature, how much margin can Apple leave for beats and how much space it can survive independently will be a serious problem for the parent company and its subsidiaries.

Related news
Airpods Pro experience: a new breakthrough of airpods
Five new languages support for seoing AI application of Microsoft IOS
Oliver schusser, head of Apple Music, will take over as president of beats
Is Apple's airpods Max really good enough for hifi?
Seeing the apple airpods max, the beats headset on his neck said he was hurt
Apple will launch the sports version of airpods Max next year: silicone material is only 290g
Hot news this week
Swati Mohn: the star behind NASA's historic Mars landing
International payment giants deploy digital currency one after another, visa has supported 35 digital currency service providers around the world
Windows 10 update coming: Microsoft solves high memory, blue screen, screen rendering and other problems
Former Harvard professor bombards Chinese scholars: academic "touch porcelain"! Response: the person concerned has been dismissed
Baidu releases Q4 financial report in 2020: Apollo intelligent transportation and intelligent driving develop at full speed
Guan Guisen, chairman of China youzan, resigns from his post in connection with a criminal offence and returns 28 million yuan of illegal income
According to the news, Xiaomi has already had a number of automobile related patents and trademarks before deciding to build the car
Don't change the plane, Lenovo Chen Jin: it's suggested that waiting for the rescuer will bring the most thorough solution of Xiaolong 888
The 27 year old Chinese boy became famous in the first World War! Making the most accurate prediction model of the new crown in the United States
Baidu financial report teleconference record: CEO and brand of electric vehicle joint venture with Geely have been determined
The most popular news this week
Source code stolen by hackers! Ticket skipping for version 1.2 of cyberpunk 2077
The access mode of laws and Regulations Database webpage and wechat applet opened by the state is announced
One coke can hold all the new coronaviruses in the world
From 17999 yuan! Huawei mate x2 goes on sale today: Zhang Zhilin wants to buy it
The new crown variant found in California may be more infectious and lethal
IPhone 11% top selling smartphone in 2020 iPhone 12 Mini ranks 10th
Apple: imdf has become an international industry standard
Samsung is expected to launch a laptop with exynos 2200 and AMD GPU this year
Function inventory of win10 new edition
Amd confirmed that it will launch a press conference on March 3: it is expected to launch RX 6700 / XT graphics card