According to the verge, a foreign media report,Twitter's revision verification policy will be launched on January 20, 2021Before that, twitter had pressed the pause button on the official application process for more than three years. After twitter confirmed in November that it would restart verification next year, the new policy was refined in the feedback of tens of thousands of users. 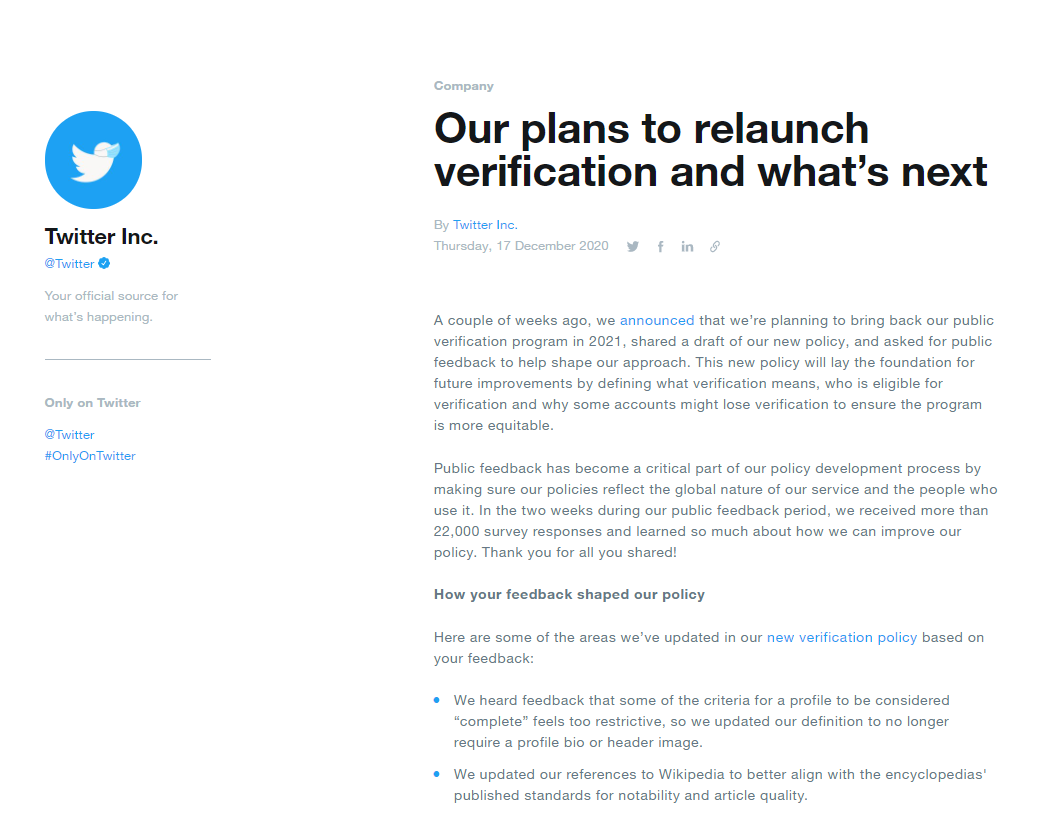 A twitter spokesman told the verge that the application would open at some point "early 2021.". But January 20 was the time the new policy took effect and the company said it would begin removing the verification badge from inactive accounts and accounts that did not meet its new requirements.

Some of the new changes in its authentication policy include looser profile information requirements to qualify for authentication, more refined and defined authentication badge categories, and new guidelines around when an account may lose its blue check mark if it is inactive or if it is found to be in violation of Twitter's policy.

The new category will include government officials - which have been verifying each one since twitter suspended the official process - as well as companies, brands and non-profit organizations. It will also include media institutions and journalists, entertainers and organizations, sports related accounts, and a broad category of "activists, organizers and other influential individuals". Twitter said it was open to expanding its list of categories over time. Sometime next year, twitter plans to introduce a way to tag accounts that automatically or once belonged to a deceased person. "We are not going to automatically remove the verification badge from the inactive accounts of deceased people, we are working to establish a way to commemorate these accounts in 2021," wrote Twitter's blog post.

"It will also be accompanied by an updated recall policy and a new application process to request a recall account," Twitter said At the same time, automatic accounts will at some point in the future be distinguished from human operated accounts, "making it easier for people to know what robots are and what are not." Twitter has yet to reveal what the tags look like or how it will take the initiative to implement the tagging requirements for zombie accounts.

For artificially operated accounts, the company said there was no risk of losing the existing badge as long as the account holder changed before January 20 to make the account meet its new verification requirements. These requirements include ensuring that the account has a verified email address or phone number, profile picture and display name. The company also plans to inform individuals at risk of losing their badges what they need to change to keep it before taking action.

Twitter reserves the right to cancel verification. "According to our policy, we may also delete the verification of accounts that are found to have seriously or repeatedly violated twitter rules. We will continue to evaluate these accounts on a case by case basis and will improve the relationship between our rule enforcement and validation in 2021. " Twitter continued in a blog post. "As always, everyone on Twitter is subject to twitter rules, and you can read more about the scope of our enforcement action here."

For users who want to apply for authentication, twitter will launch a new "self-service application process" in the app at some time in early 2021, allowing applicants to select a category for verification and confirm their identity. Twitter said it would use manual reviews and automated systems to get involved in applications.

Related news
Dorsey trump, twitter CEO: I'm responsible for verifying the tags
If trump is defeated, twitter will no longer give him preferential treatment
Twitter: will hand over @ pot account to Biden administration on Inauguration Day
Twitter Blue Badge certification returns next year with new guide (photo)
Twitter will launch a new verification policy on January 20, 2021
Trump account blocked, twitter shares plummeted after hours
Hot news this week
Apple store staff committed suicide due to work pressure?
Xiaomi has issued a patent for autonomous driving, which can automatically adjust its driving ability according to the road class
U.S. inflation blasts Nearly half of households aim to live: the price of the commodity has gone up outrageously
Jiangsu Bank's Beijing branch was fined 4.9 million for "seven crimes" involving the illegal issuance of loans
Alipay announces automatic identification of automatic identification of vehicles to enhance the quality of drivers
Huawei has released a patent on the packaging structure that solves the problem of black spots on display panels
More than 20,000 domestic Model Y "broken shaft" recalls Tesla's ability to dump pots surprised netizens
Browser Search Engine Giants Quasi-Upgrade Microsoft to issue an unsafe warning to 2 billion Chrome users
Could new SEC rules prevent Chinese companies from listing in the US? The Foreign Ministry responded: firmly opposed
The U.S. blocked Avista's acquisition of chip giant ARM, fearing it would hurt competition and neutrality
The most popular news this week
After being disclosed, Canada Goose Commitment: Strictly abide by China Laws and Regulations
What signal? Italy fines Amazon $1.28 billion, bypassing the EU
Adobe is buying social media marketing company ContentCal
Plum blossom venture investment Wu Shichun: this year's new consumption apparently appeared an overheating or bubble phenomenon
What are the pain points and difficulties of innovation? Gome Dujuan: The system's internal consumption and mechanism of the short board
Canada Goose Update China Return Service Commitment: Tags are intact, support for free replacement
In history, the most expensive space package machine billionaires in front of Zemou make a success into the International Space Station.
China Space Station's first space teaching event has been a complete success!
Yumei Technology's final case did not perform the amount of more than 95 million chairmans were limited
Apple TVOS 15.2 RC Preview Publish