A drop of 1.22 million yuan, a lot of sales of Rolls Royce, pure marketing or real sales?

According to the product link of pinduoduo, Rolls Royce's order is a deposit order. A deposit of 99999 yuan can initiate a collage. The online deposit can be used to offset the car payment. The expenses of tax, insurance and registration should be borne by the car buyer. The product interface shows that more than 100000 people want to make a single order.

After the event of "selling Rolls Royce with a subsidy of 1.2 million yuan" attracted attention, some media soon contacted the customer service on the official website of Rolls Royce and asked about the purchase of Rolls Royce by pinduoduo. Rolls Royce replied that at present, its only official car purchase channel is offline 4S shop, and it has not cooperated with pinduoduo in any purchase channels, but it does not rule out the possibility of cooperation between dealers and the store.

Rolls Royce also said: "without harming the interests of consumers and the brand image of Rolls Royce, we are willing to see different attempts by e-commerce platforms and businesses for product sales and publicity." According to the information on Rolls Royce's official website, there are only two dealers in Shanghai, which are located in Luwan District and Pudong New Area respectively.

In fact, this is not the first time pinduoduo has launched a campaign similar to that of heavily subsidizing the sale of cars. Last time, pinduoduo also sold Tesla with a large subsidy of 40000 yuan. But different from Rolls Royce's calmer response this time, Tesla launched a fierce response to pinduoduo's similar behavior.

In July 2020, a Tesla Model 3 "ten thousand people group" activity was put on the "flagship store of car suitable to buy" on pinduoduo. The price of the group was 251800 yuan, which was 40000 yuan cheaper than the official starting price of 291800 yuan. However, in the end, only five people have the right to purchase. When the consumer paid for the car to pick up the car, a Wuhan car owner was rejected by Tesla.

In response, Tesla's response is that such consumer behavior on pinduoduo is suspected of violating Tesla's "no resale" clause, so Tesla cancelled the order according to the terms. Tesla also said that as long as the owner changes to an official channel to place an order, Tesla will provide remedial measures, and will provide legal aid if the owner decides to sue pinduoduo.

For a long time, most of the strong automobile brands have closed and fixed sales channels in order to control the sales price of all channels and stabilize the sales network. And pinduoduo's behavior undoubtedly has an impact on the original car sales model, and pinduoduo's subsidy sales of vehicles each time are extremely limited, more for brand marketing rather than for sales. 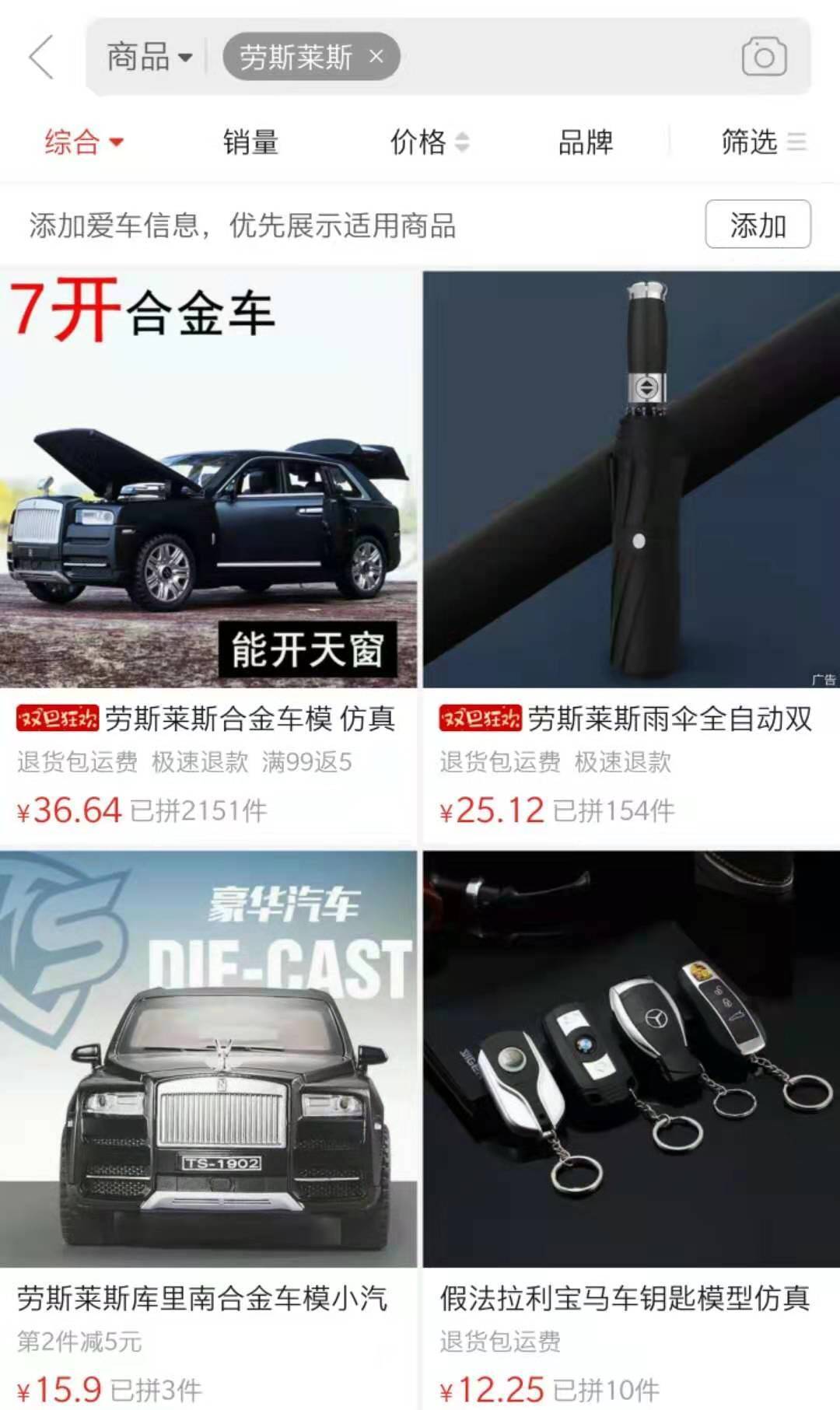 On December 18, when titanium media app again logged into pinduoduo page to search for Rolls Royce sales stores, it was found that the car sales page had disappeared.

In this way, pinduoduo's "Rolls Royce price reduction sales" disappeared quietly after being put on the Internet topic. Pinduoduo and Rolls Royce have won a wave of attention, the specific vehicle sales situation is unknown.

Related news
"Goddess of celebration" is new again! Rolls Royce curinan black badge China debut
China orders blowout growth! Rolls Royce will resume production in the UK
"Return to old friends" with old Ganma! Tencent QQ join hands with Rolls Royce
The driver bowed his head to pick up his cell phone
Just because the driver lowered his head to pick up a mobile phone, the Rolls Royce phantom car was hit and scrapped!
Rolls Royce responds to pinduoduo's 1.22 million subsidy: platform and individual behavior of businesses
A drop of 1.22 million yuan, a lot of sales of Rolls Royce, pure marketing or real sales?
Hot news this week
Full screen bomb is playing crazy wechat Android version 8.0 beta version comes with download
"Synthetic watermelon" became popular this weekend
Tesla's response to the spontaneous combustion and explosion of Shanghai model 3: preliminary judgment that the accident was caused by the collision under the car
Some users found that wechat 8.0 raised the upper limit of visible number of friends and circle of friends to 10000: wechat Lehua
China's auto chips stopped in Europe and America? Official response
IBM China Research Institute (IBM CRL) has been completely closed
Talk about "explosion"! Android wechat 8.0 internal test experience: is it the same as apple
Does the car Li Zi nucleic acid positive eat to be able to infect? The experts finally understood what they said
Collective rollover of 5nm chips: embarrassment of advanced manufacturing process
The official version of wechat Android 8.0 will be released next week
The most popular news this week
NVIDIA releases geforce 461.40 driver: supports mobile RTX 30 graphics card
16 hours long endurance! Lenovo real wireless Bluetooth headset price 59 yuan
More iPhone and other capacity will be transferred from China: India will produce new Apple 12
Take out the M1 core apple, this year may let Intel, amd laptop very uncomfortable
Jijia z590 main board collective listing: quadruple surprise, white pick 290 yuan
"Wechat red envelope cover" turned out to be a profiteering business, with some earning 100000 yuan a month secretly
WiFi 6 router that will make Jingdou money! First sale of redmi ax5 tomorrow: 269 yuan
The strongest combination of iPhone XR and A14 core! IPhone se plus rendering exposure
Andy Lau officially entered the tiktok, which is his first social account in the world.
ZTE micro film "go ahead, always in" will be released soon