In three weeks' time, AMD will release a new generation of Reebok 5000U and Reebok 5000h series mobile platforms based on zen3 architecture. Intel will also release 11 generation core H series. In addition, NVIDIA RTX 30 mobile series will usher in new changes in lightweight books and game currencies. In particular, game books will be comprehensively updated.

Even the lowest looking 5 5600h is not simple at all. Previous exposure shows that its reference frequency is 3.0GHz, and the maximum acceleration is 4.1ghz, which is 100MHz higher than the current Ruilong 53600h, which is too insincere. 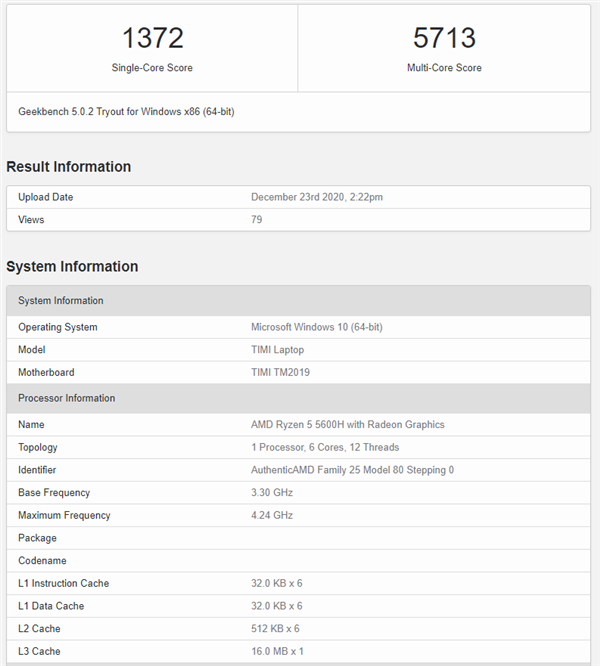 However, the reek 55600h has already appeared in geekbench 5 database. The monitoring shows that the reference frequency reaches 3.3GHz, and the acceleration frequency increases to 4.25ghz, 300MHz and 250MHz higher than the present, respectively. In addition, there are 768kb first level cache, 3MB second level cache and 16MB third level cache.

The results show that the performance of single core and multi-core are improved by 37.8% and 18.1% respectively.

The zen3 architecture has an average IPC improvement of up to 19%, coupled with the high frequency. The power consumption of the thermal design is still controlled at 45W, which is still under the condition of 7Nm process unchanged.

In horizontal comparison, the single core performance of the 5 5600h has reached the level of the desktop i7-10700k.

However, the problem is that the current sharp dragon 4000H series theory runs super strong, but the actual game performance is not consistent with it, obviously lagging behind the 10 generation core h. We hope that the Reebok 5000h series can really take off, and also hope that the Reebok game instinct is more.