The new Mac can also install windows! And the surface?

I don't know if you have any impression.

When Tony evaluated the M1 chip MAC a while ago, considering that a lot of software has not been adapted, and that it can't install windows system, I specially remind you not to start blindly at the end of the article.

M1 processor's performance is as good as it can be. It will be very embarrassing if you encounter a situation in which your just need software can't run on the new Mac. 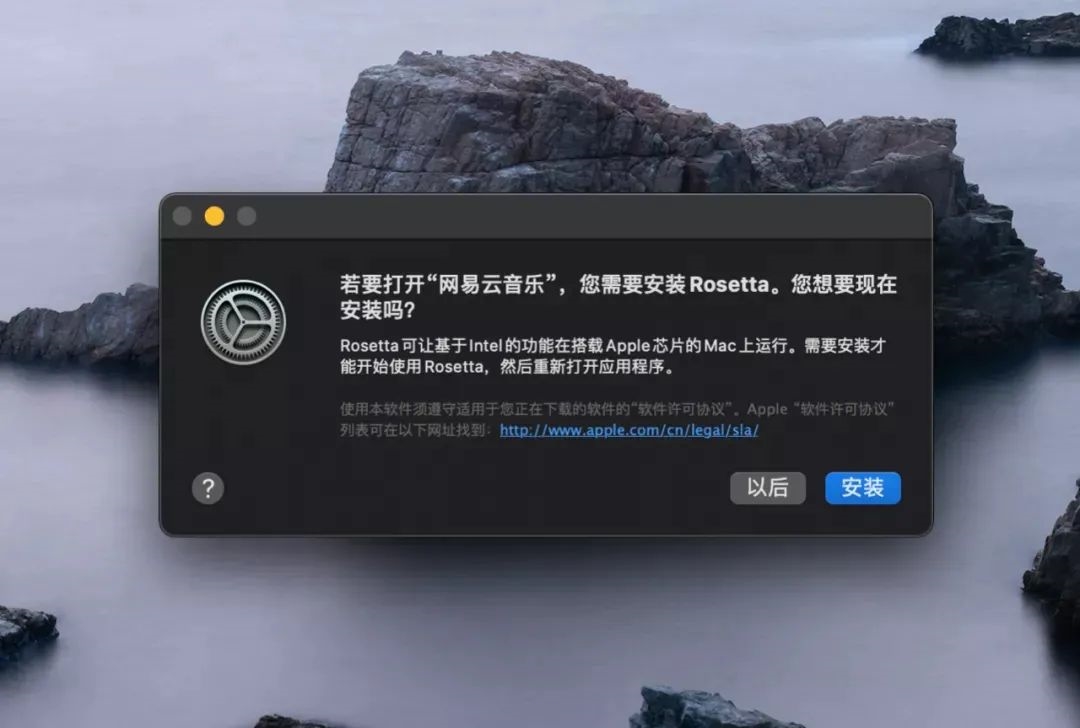 In the twinkling of an eye, more than a month later, Tony never thought that Apple's appeal was so strong. During this period, those software manufacturers were more and more active in adapting to Apple's M1 processor. 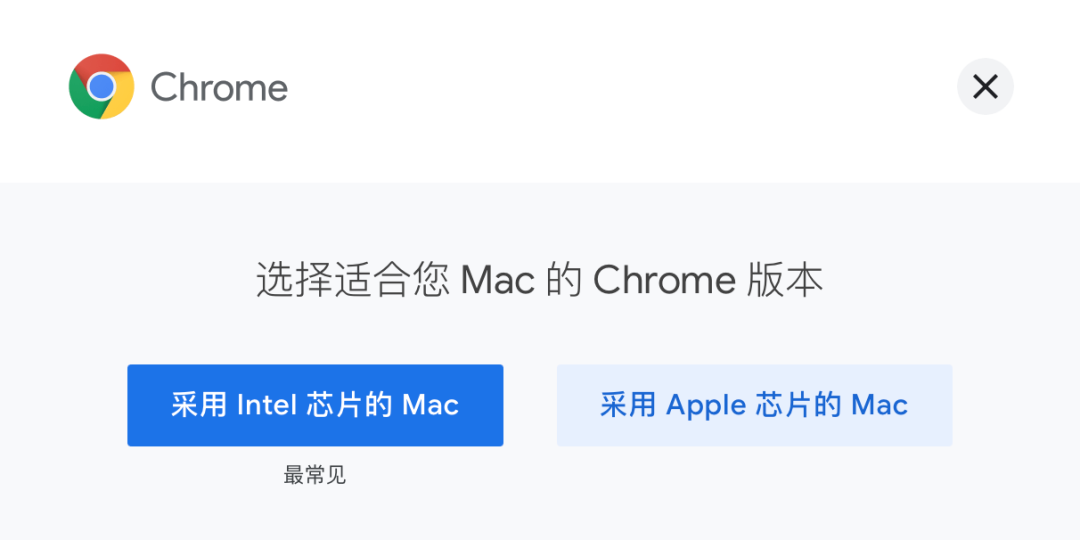 Then Adobe released some beta versions of M1.

Tut Tut, if we continue to develop at this pace, I don't think it will take two years for the MAC product line to completely break up with Intel processors, and then use all the processors developed by Apple itself.

But then again, most of the software that has been adapted in front of us is originally available on the Mac platform.

And those software and games that were only released on Windows system before, now come to Mac with apple chip, we don't expect manufacturers to develop one for it. 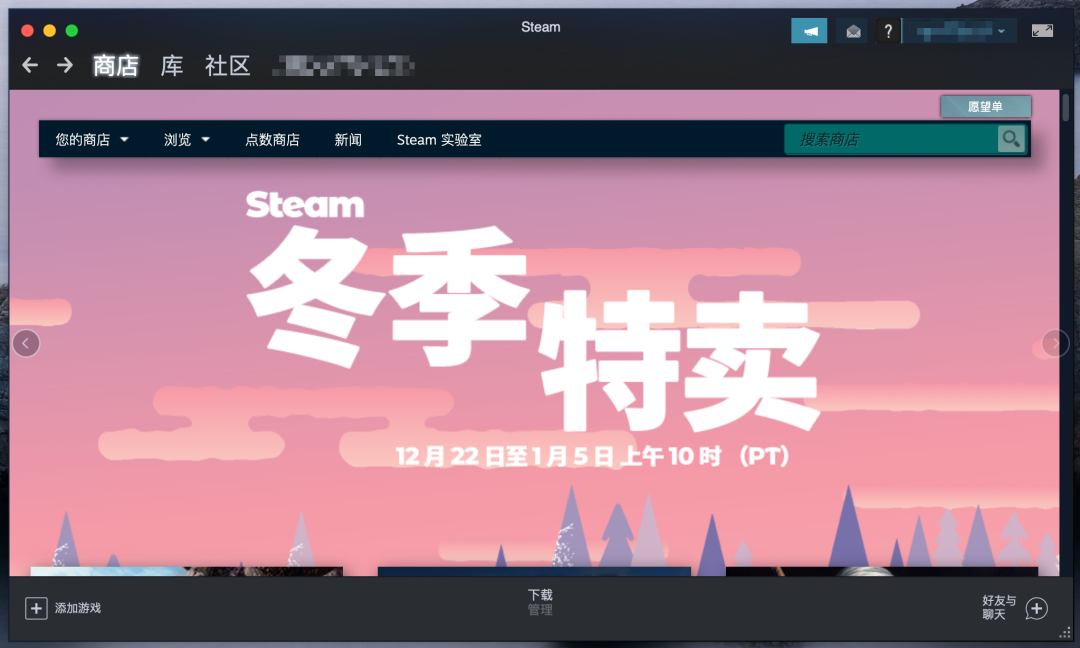 So the most ideal situation of the new Mac is that it can also install windows, so that even if it encounters software and games that it can't run, Mac users can also solve the problem by running Windows on the computer.

At first, Tony thought it was a long way off.

Just a few days ago, the engineering team of Parallels Desktop, the strongest virtual machine software in MacOS, finally announced that it supports running Windows on the Mac with M1 chip! 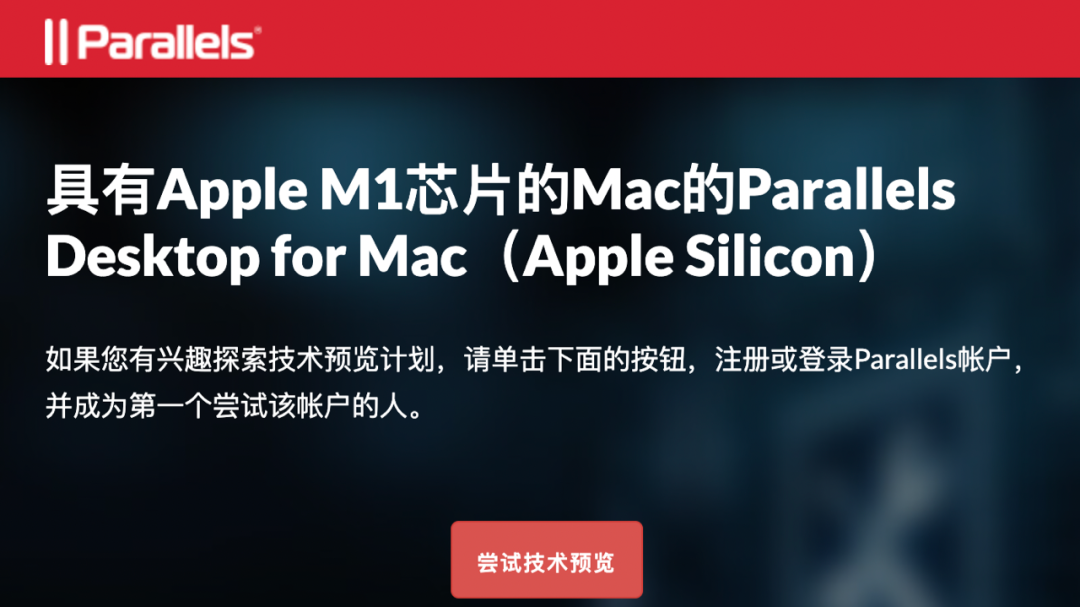 However, this system is a little different from windows, which is familiar to us. Because Apple M1 processor is based on ARM architecture, there is a huge difference between it and Intel x86 architecture processor.

Therefore, parallels virtual machine can only run Windows 10 on arm, which is specially designed by Microsoft for ARM processor. When we use this system, we will still encounter software incompatibility.

In this case, Tony will try windows on his new Mac, and at the same time, he will take his friends to see how Windows software adapts to arm processor. 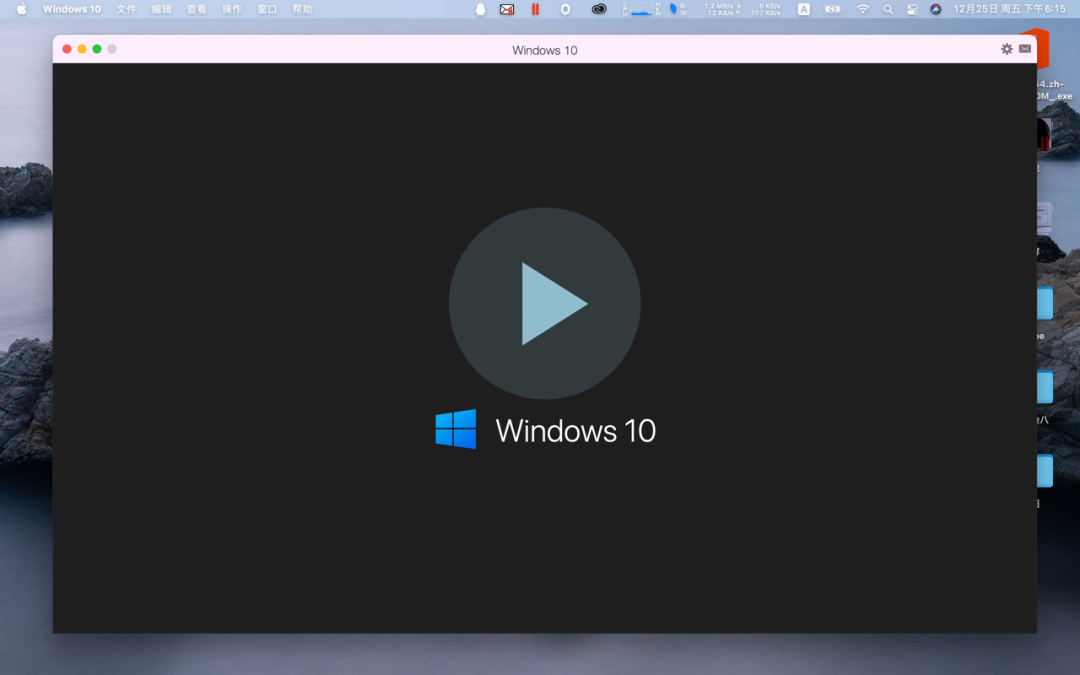 The first thing to install win10 system in the virtual machine is that Tony first downloaded geekbench5 running score software to let the computer run the next score under MacOS system and windows system.

The CPU single core and multi-core scores are as follows:

Poor friends can see that the efficiency of parallel virtual machine running win10 is very good, the CPU single core performance is only 15%.

The reason why their multi-core performance is so poor is that I only allocated four cores to the virtual machine, and the memory given to it is only 4G. 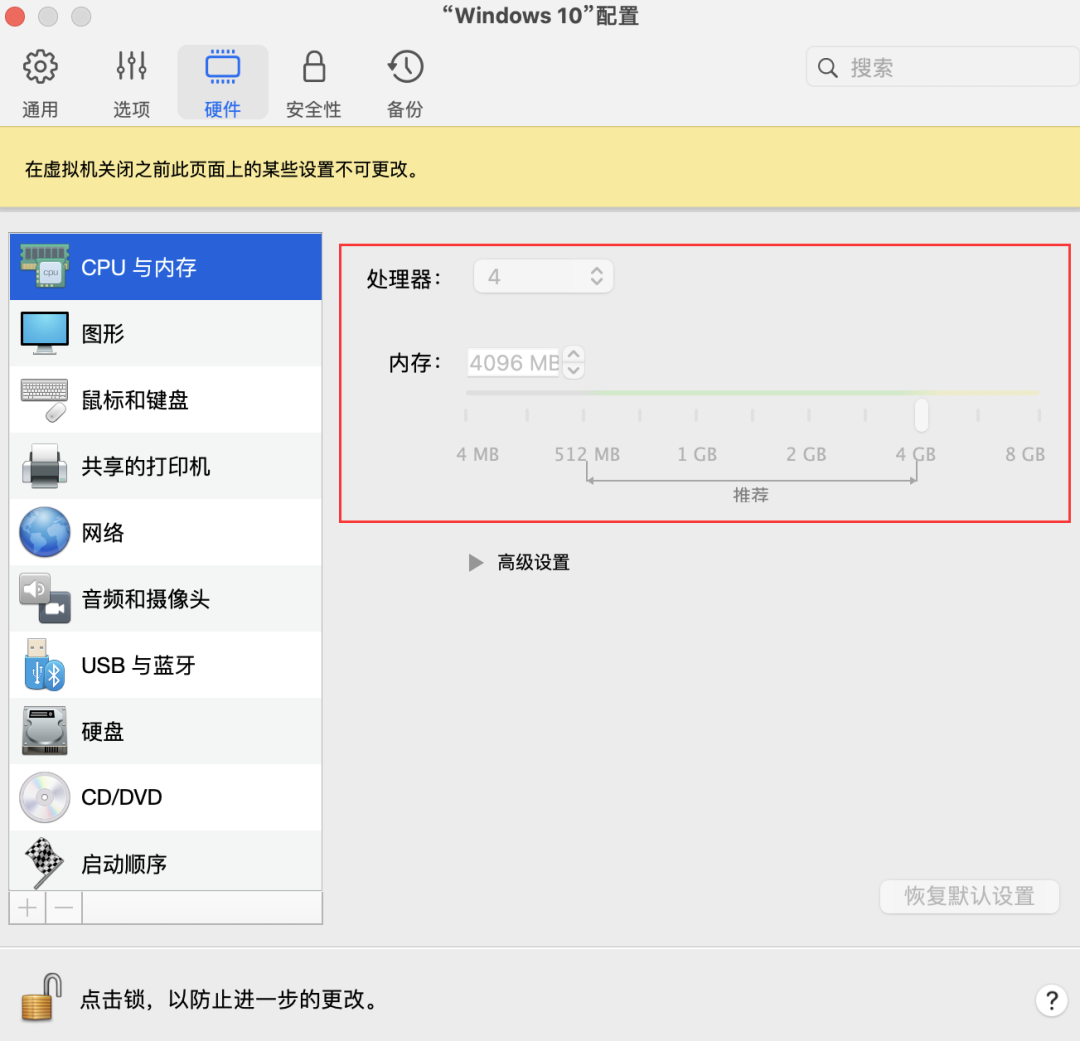 If I assign all the eight cores of the processor to the virtual machine, its multi-core score can go up a little bit.

As a reference, Tony specially checked Microsoft Surface Pro x, which is equipped with Qualcomm snapdragon SQ2 processor. Its single core score in geekbench5 is only 802, while its multi-core score is 3044.

Although these two processors are based on ARM architecture, considering that snapdragon SQ2 is not as good at running Windows as other people's M1 in virtual machine, it's really a bit shameful. 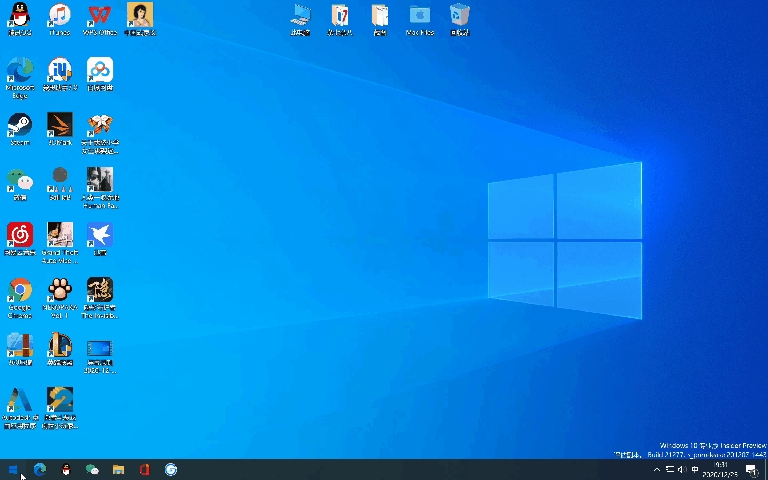 And just like MacOS, if we open the software without arm processor in Windows 10 on arm, the system will automatically translate these software to make them run smoothly.

Tony tried to download wechat and QQ in windows, and found that they can be opened and run smoothly. 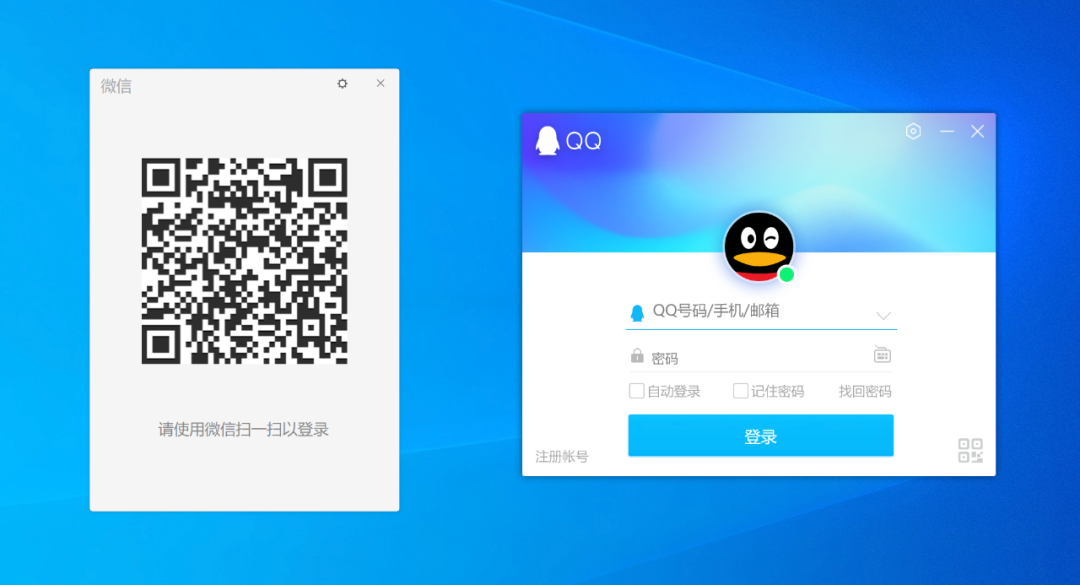 In the task manager, you can clearly see that they are both x86 software. At present, there is no version that supports ARM processor on Windows platform. 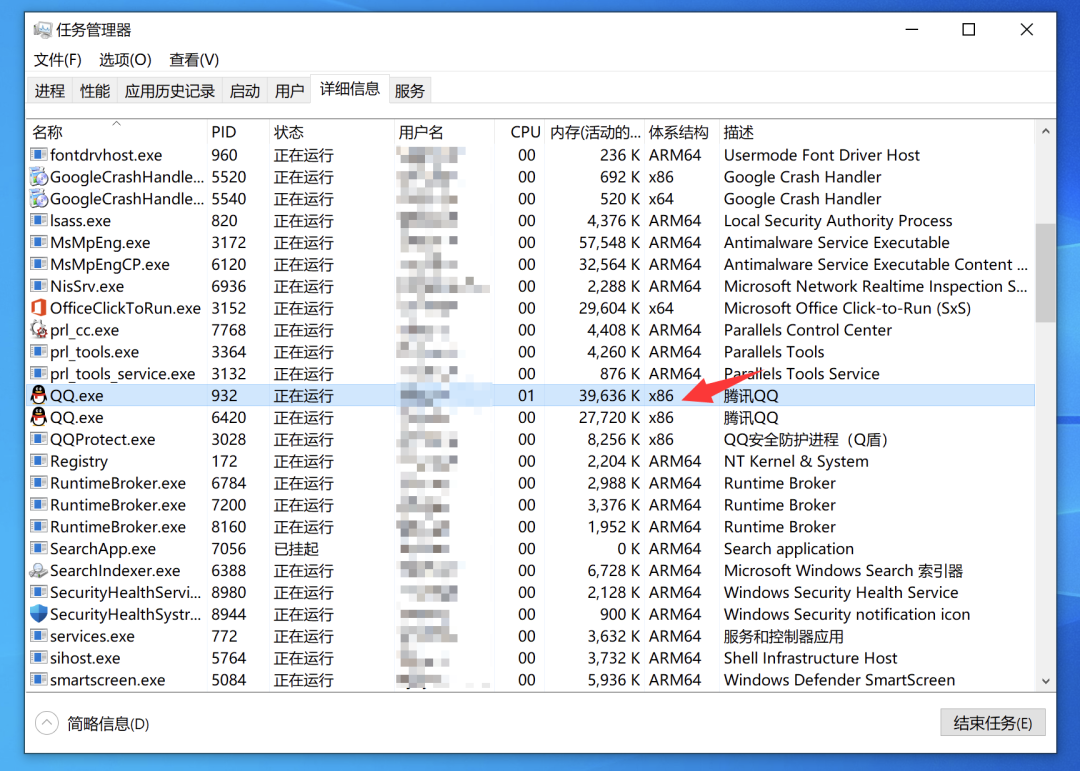 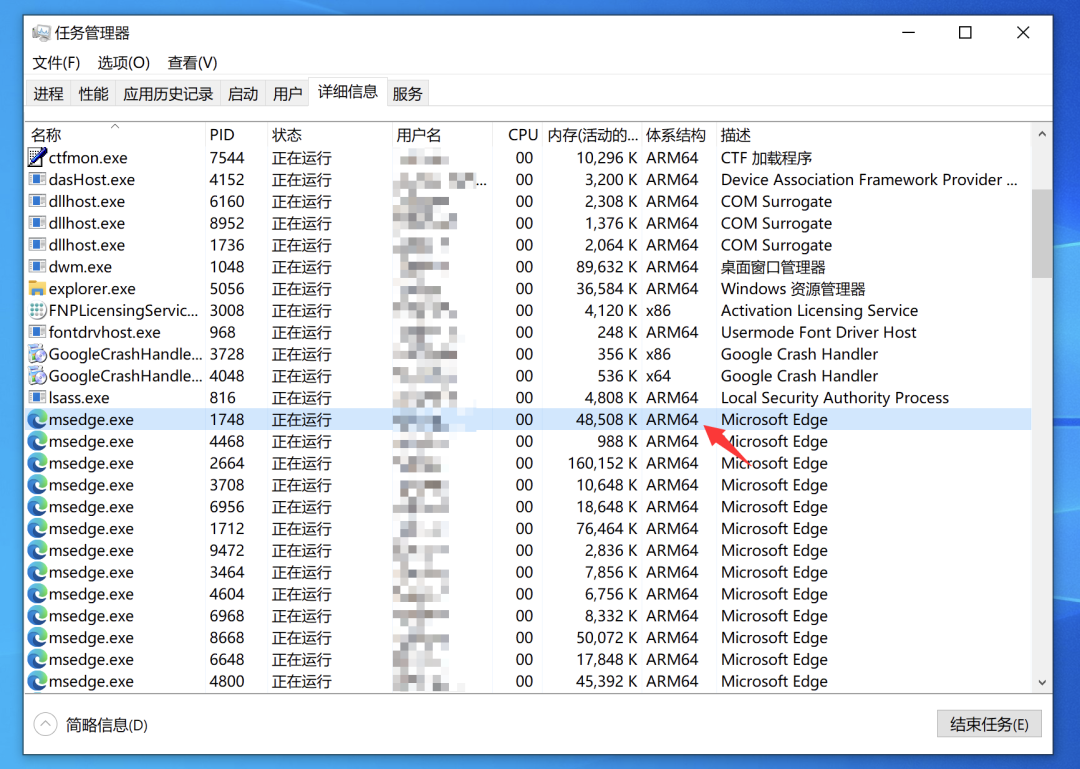 What about the adaptation of other software in windows on arm?

Tony first opened Microsoft's official website to install an office suite for his computer. Unexpectedly, he found that it had not yet launched a 64 bit arm version of office! 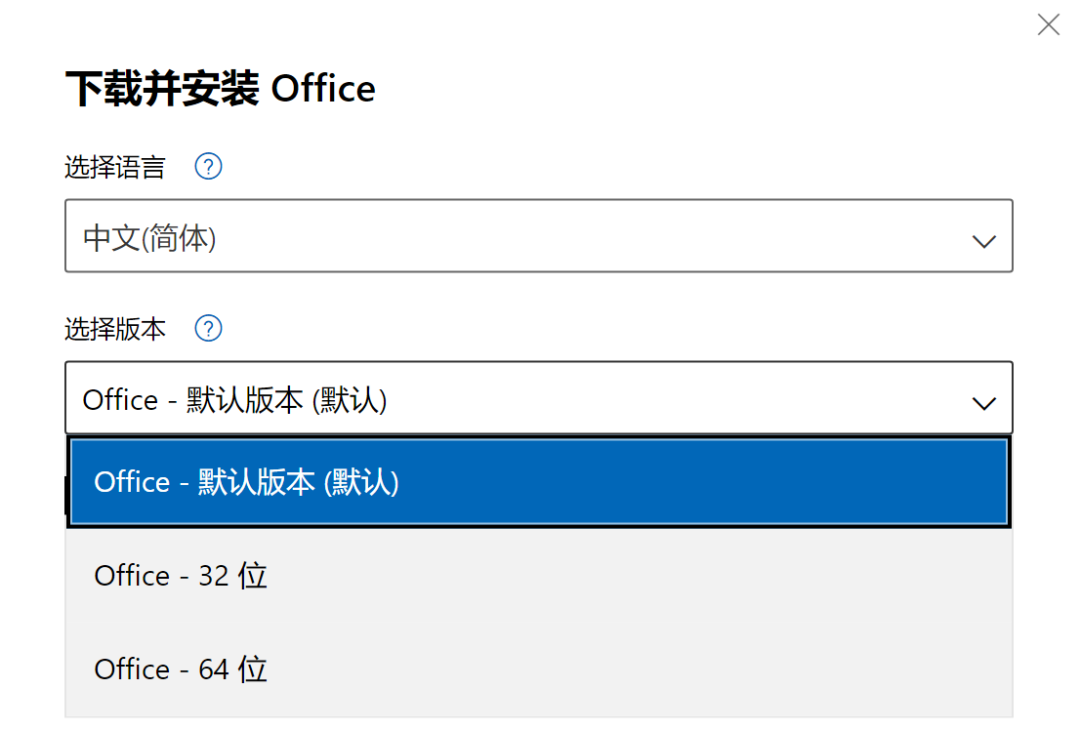 Do you think Microsoft has made arm version of office suite for MacOS system, but your own windows on ARM system doesn't? 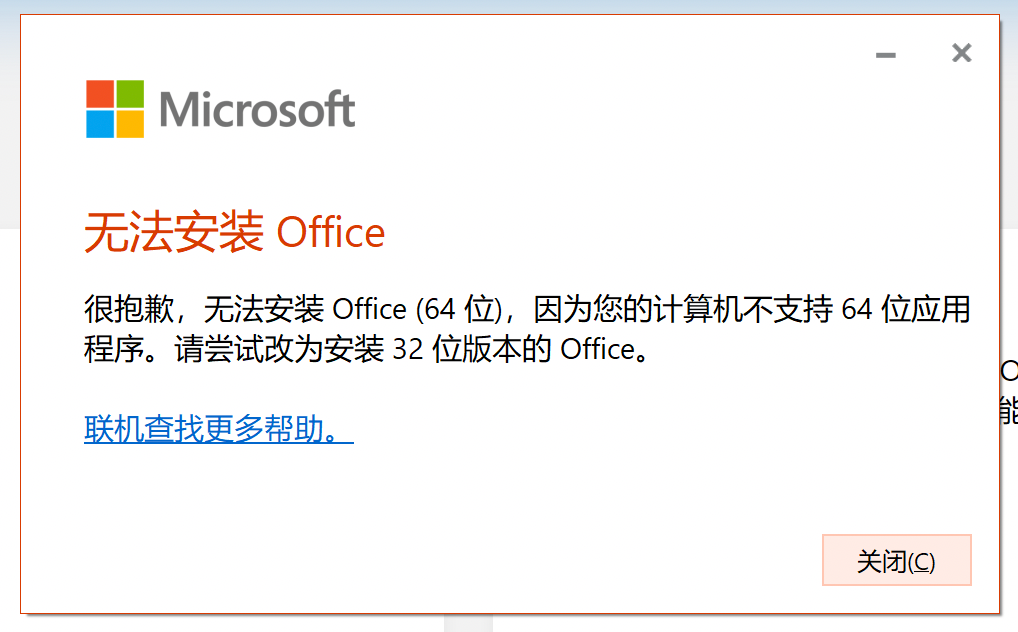 Unfortunately, Adobe only launched a beta version of Photoshop on windows on arm. 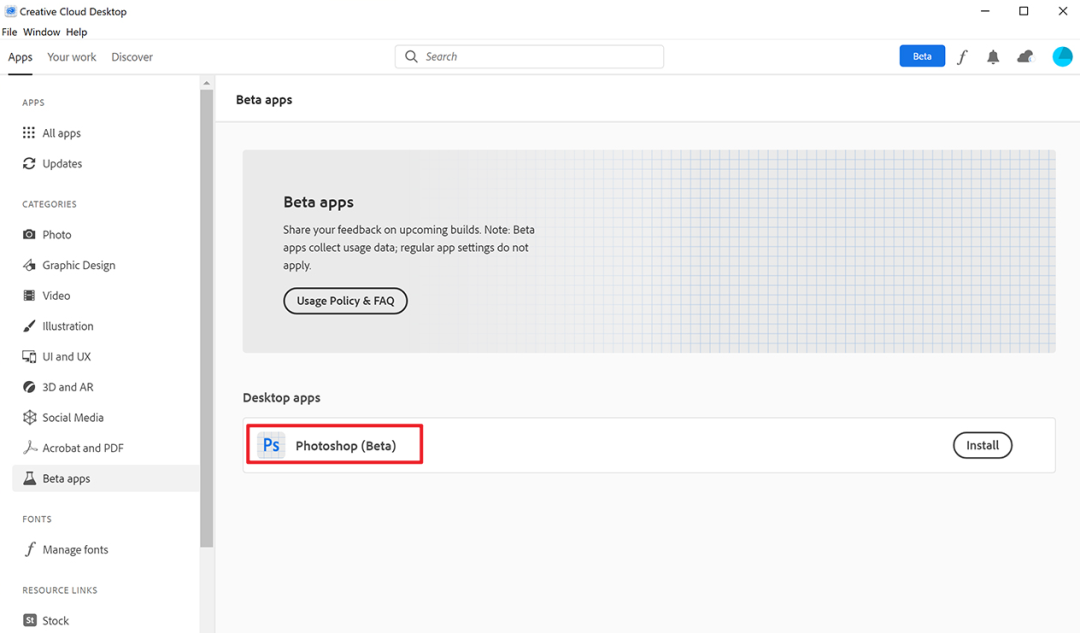 Em。。。 This is not a little bit different from the amount of software it adapts to on the Mac OS system. 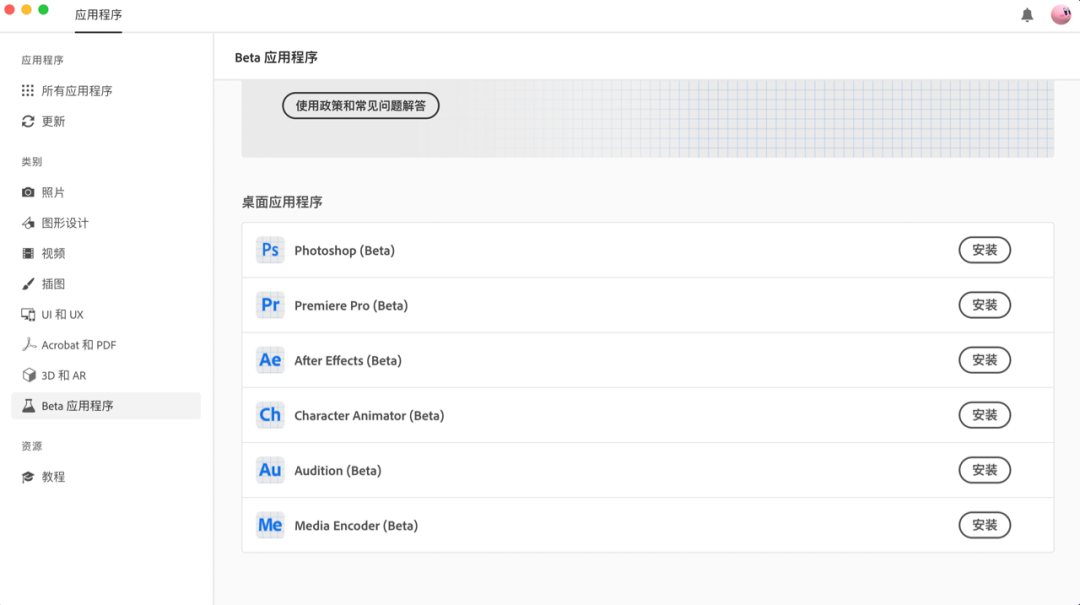 It's the same with chrome.

Google doesn't launch chrome that supports ARM processor on Windows platform, so Tony can only download to the x86 version of Chrome browser on windows on arm. 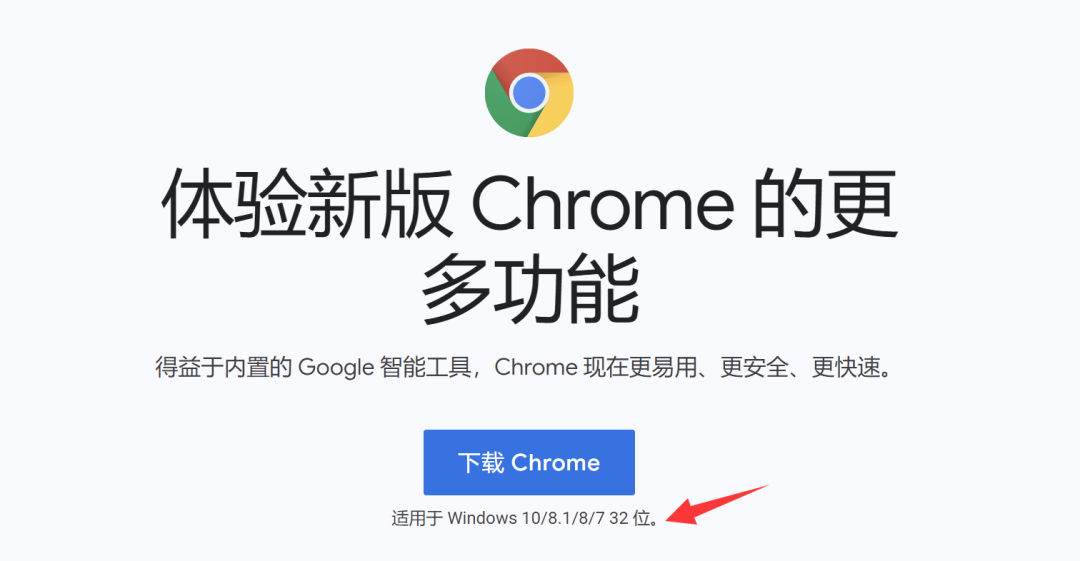 Seeing this, some bad friends may wonder if they can play games on windows on arm. Tony also downloaded several games from the virtual machine to test them.

The first is lol, which can open the game and start smoothly. 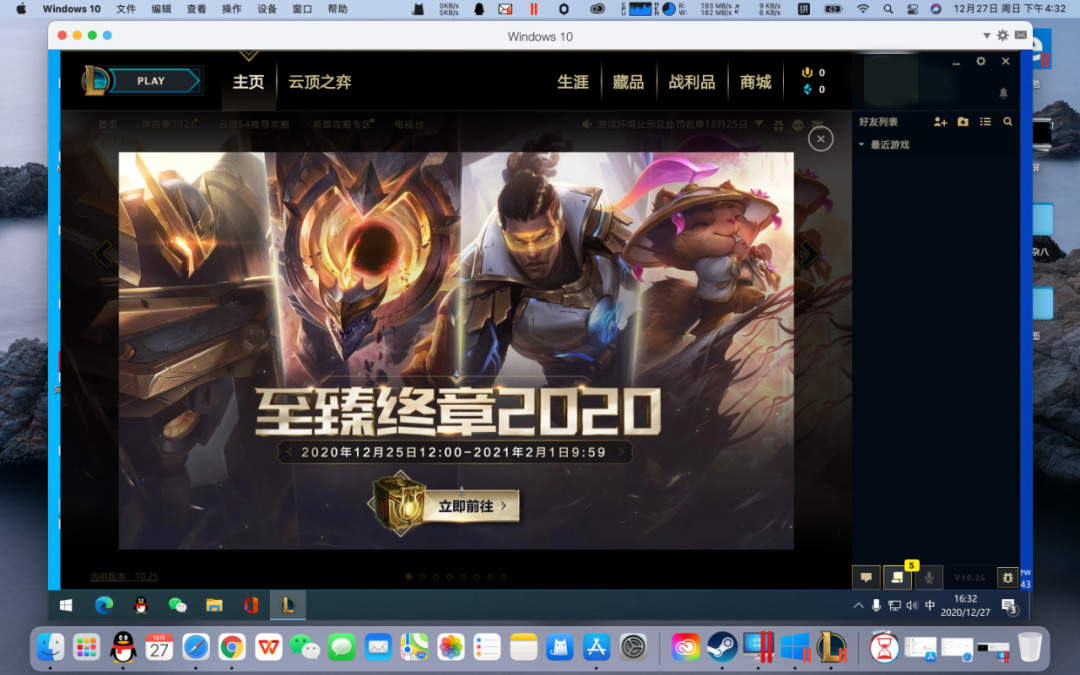 But in the process of the game, sometimes the game will flash back. I don't know whether it is the bug of the virtual machine or the compilation problem of the windows system. 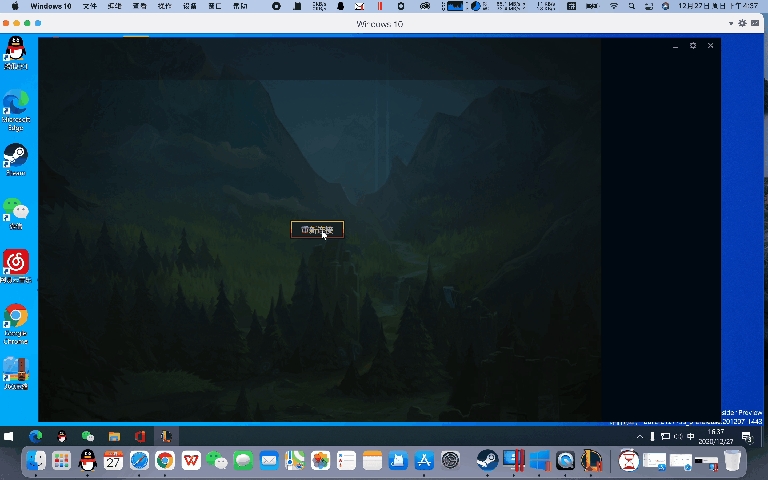 Then there was the vanguard. Tony didn't know why Blizzard client couldn't be installed. I was stuck in the game download step. 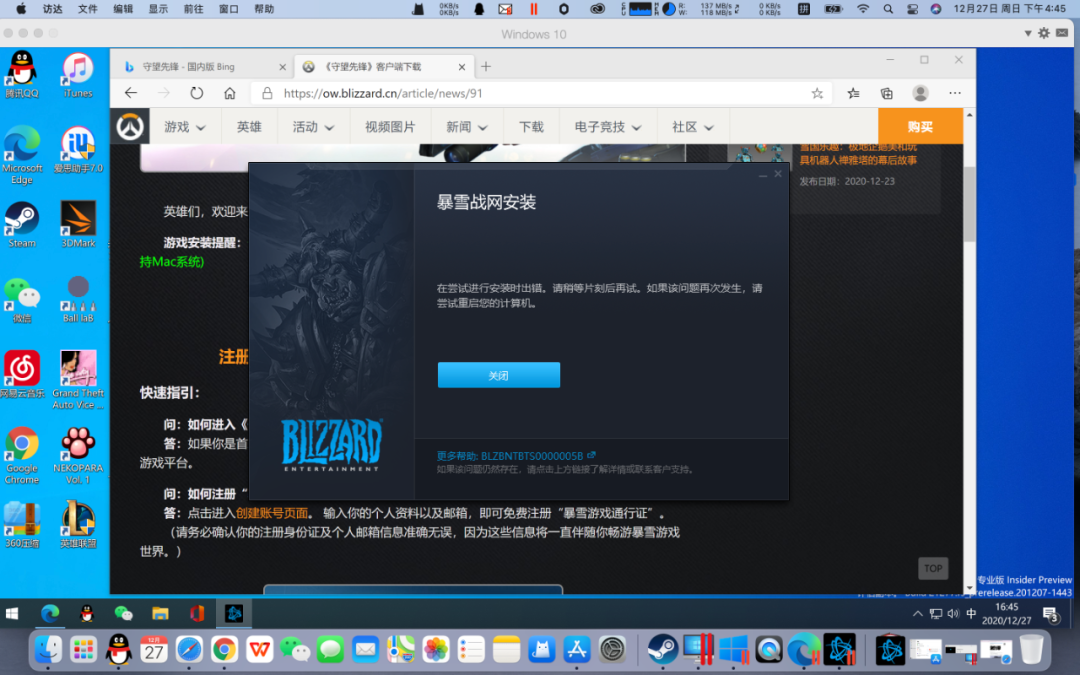 Steam can be installed smoothly.

Just when I opened CS: go, it mercilessly reported me an error that the hardware did not support running this game.

There are also games like cyberpunk 2077, Grand Theft Auto: crime city, etc., which either can't run or have a black screen.

Fortunately, those games that don't have a lot of hardware configuration, such as human failure, fighting the dragon, nekopara, Chinese parents can still run happily in the virtual machine, including dota2 ～ 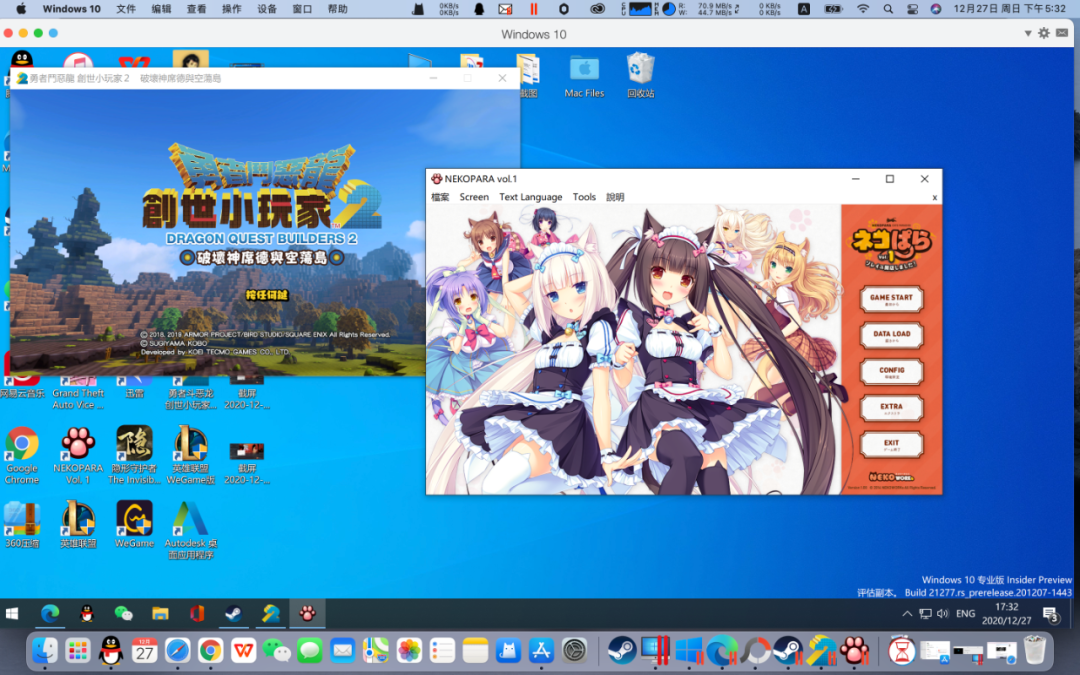 After all the trouble ahead, Tony finally understood one thing.

That is, the software ecology of those windows devices with ARM processor on the market is not much better than that of the new Mac. Many software still have to be compiled to run. 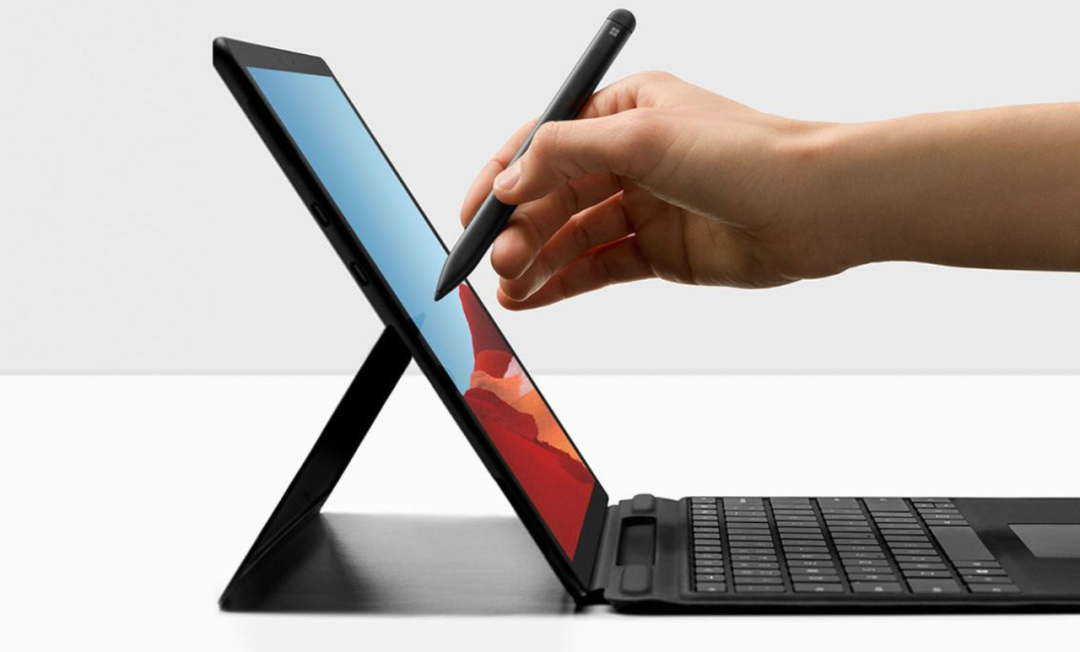 If you need windows software, don't buy a Mac with M1 processor. It's better to buy a Windows laptop than to install an additional system in your computer.

When choosing a Windows laptop, there is no need to consider buying a computer with ARM processor.

These computers are not only inferior to M1 in performance, but also inferior to Wintel in software compatibility. Otherwise, if you are not careful, you will become a martyr.

I hope this article can be a reference for you. 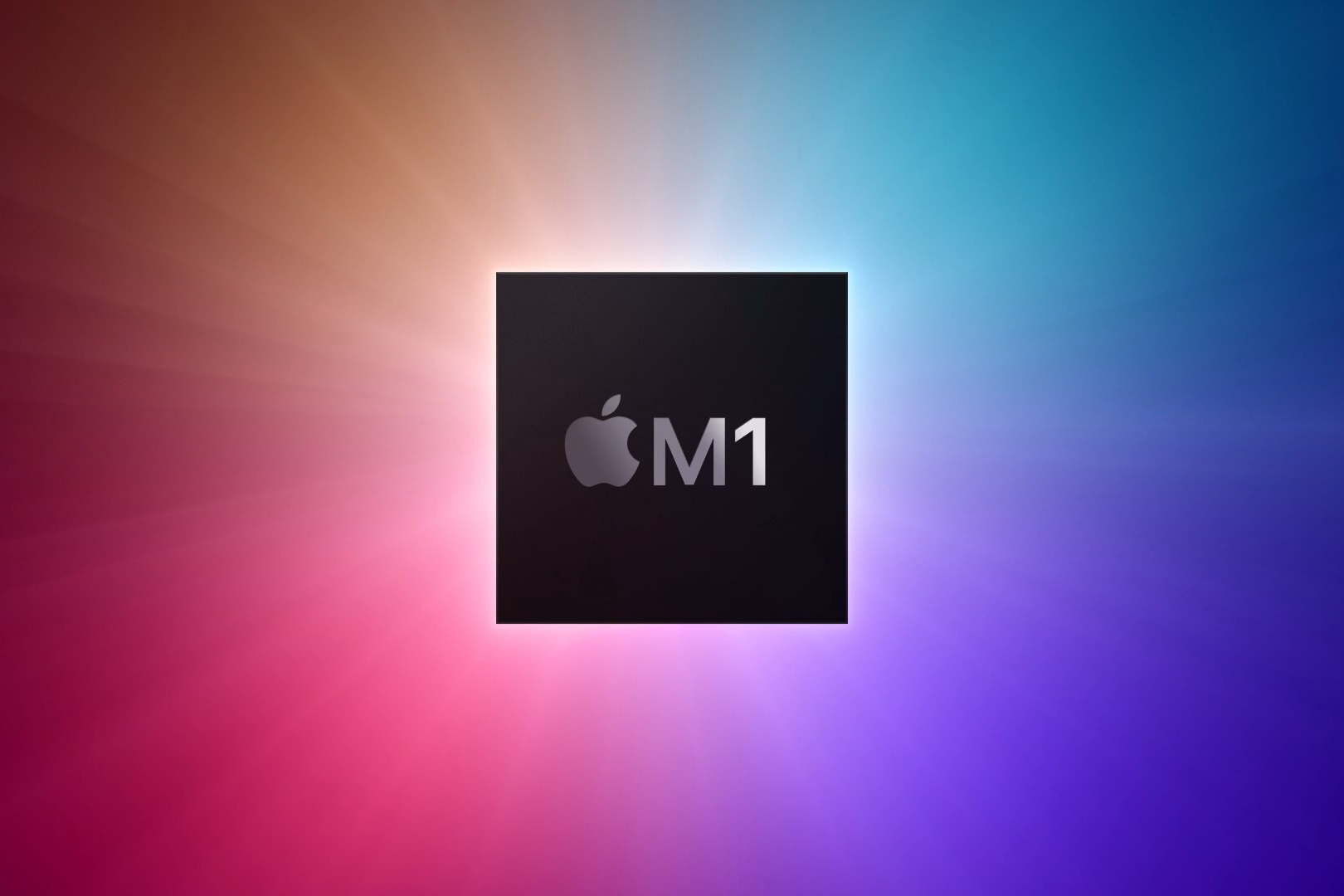 Related news
Good-looking performance two blossoms run Windows 10 perfectly with Mac. Don't be too good.
The performance test efficiency of new Mac with M1 running Windows 10 is much higher than that of surface Pro X
Too much difference: M1 MAC run points crush windows arm notebook
The new Mac can also install windows! And the surface?
Hot news this week
The developer of the dating app Tinder has reached an agreement with Google over billing rules for its app store
Still did it! Canada has banned Huawei and ZTE from participating in the country's 5G network on "national security" grounds
Red Elf Lightning erupts in the Himalayas Spectacular Spectacle: Experts Reveal What Exactly Is This?
The founder of the Internet Quick Hand Su Hua was taken away for investigation, and the fast hand responded: the news was not true
Wang Xiang, president of Xiaomi, explained that a shortage of low-end chips is a major challenge in overseas markets
Or for Studio Display Pro, the release of Apple's 27-inch Mini LED-backlit Display has been delayed by October
Tencent Q1: The business service business has "slightly decreased" year -on -year, and resource centralized video cloud and network security | View financial report
One picture to understand! Blue Factory has issued 3 new machines in a row: self-developed chip blessing, the narrowest lower border
Sony released the active noise-canceling headphones WH-1000XM5, equipped with 2 chips and 8 microphones
Tencent established a smart technology company in Chengdu, and its business scope includes Internet data services
The most popular news this week
Xiaomi's first Leica flagship! Xiaomi Mi 12 Ultra's latest appearance map: the screen ratio is amazing
The founder of Xiaopeng Auto! He Xiaopeng uses "Keda Duck" to ask for help online
Not afraid of merchants "first rise and then fall"! 618 Taobao launched a new feature: one-click refund of the price difference
How does the Internet make People Copy each other
Fed Vice Chairman: The future digital dollar may complement the coexistence of stablecoins and commercial bank currencies
ZHANG Pingan, CEO of HUAWEI CLOUD: The value of data governance in China has not been fully tapped Data and AI should be accelerated
Shenzhen Atmosphere! The sales price of mobile phones, computers and other products is subsidized by 15%
Microsoft shows third -party components: Win11 chicken rib function is saved
No need to grab it! Sony announced an increase in PS5 shipments
Audi advertising poster photos only sell for 8 yuan? Photographers question the unreasonable use of the photo purchase