Bitcoin continued its record rise on Saturday, breaking through $30000 for the first time at the beginning of this year. More and more traders and investors are betting that bitcoin will become a mainstream payment method.Earlier on Saturday, the world's most popular cryptocurrency was priced at $31824, and almost all other markets were closed by the first weekend of 2021. The stock ended up about 8 per cent at $31743. 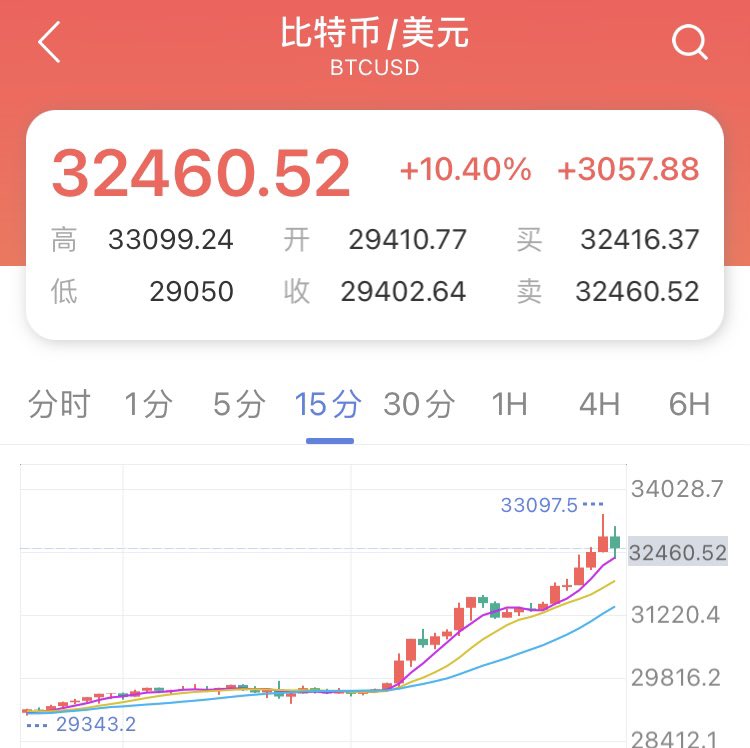 Blockchain has only been around for about 10 years. By 2020, the demand for blockchain from large investors in the United States will grow, because they believe that blockchain has the ability to hedge inflation and the potential for quick profits, and it is expected that it will become a mainstream payment method.

Some also see it as a safe haven during the new coronavirus pandemic, similar to gold.

It is traded on many exchanges, the largest of which is coinbase, which itself is preparing to go public and is the first such platform to go public on Wall Street.

Multiple competitors use cryptocurrencies similar to blockchain or electronic ledger technology. Ethereum, the second-largest cryptocurrency, rose 465% in 2020 and 5.3% on Saturday.

But it turns out that bitcoin is also an unstable investment.

Bailey, governor of the Bank of England, warned in October about the use of this payment method.

"To be honest, it's hard to see that bitcoin has what we usually call intrinsic value," he said. "It may have the external value that people want it to have."

Bailey added that he was "very nervous" about people using bitcoin to pay, noting that investors should be aware that the price of bitcoin is extremely volatile.

Related news
Why Bitcoin climbed $10,000: Thanks to Facebook Fed
Fake bitcoin transactions.
Bitcoin price exceeds $30000, more investors bet that it will become a mainstream payment method
Hot news this week
Full screen bomb is playing crazy wechat Android version 8.0 beta version comes with download
"Synthetic watermelon" became popular this weekend
Tesla's response to the spontaneous combustion and explosion of Shanghai model 3: preliminary judgment that the accident was caused by the collision under the car
Some users found that wechat 8.0 raised the upper limit of visible number of friends and circle of friends to 10000: wechat Lehua
China's auto chips stopped in Europe and America? Official response
IBM China Research Institute (IBM CRL) has been completely closed
Talk about "explosion"! Android wechat 8.0 internal test experience: is it the same as apple
Does the car Li Zi nucleic acid positive eat to be able to infect? The experts finally understood what they said
Collective rollover of 5nm chips: embarrassment of advanced manufacturing process
The official version of wechat Android 8.0 will be released next week
The most popular news this week
ZTE micro film "go ahead, always in" will be released soon
Sony's most expensive micro order, which sells 48000 yuan, meets your three big wishes for pixels, performance and video at one time
Sony's most powerful flagship Xperia Pro released in one year: the price is as high as 16000 yuan!
Arecibo is gone. Are we going to build Arecibo II on the moon?
You can repair your iPhone at any store. Apple is slowly blocking the road
NVIDIA RTX 3060 / 3070 mobile graphics card 3dmark time spy
[Download] stable version of Firefox 85.0 released: enhanced tracking protection, optimized bookmarks, simplified password management
Intel outsources some of its chips to TSMC: it prefers the latter's 3nm process, the source said
Biden signed an executive order authorizing the federal government to convert U.S. Postal vehicles into electric vehicles
Microsoft is expected to launch surface laptop 4 in April this year