Pinduoduo denies that "people at the bottom take their lives for money". Zhihu: the answer is from certified users

January 4 news, today, "pinduoduo 23-year-old employee died suddenly after work late at night" news continued to ferment on the Internet. Some netizens revealed that pinduoduo had used Zhihu's official account to publish the remark that "the bottom people exchange their lives for money".In response, pinduoduo once replied that the relevant remarks were rumors, and said that "before this announcement, pinduoduo has never released an" official response "to the online screenshot. We are firmly opposed to the view in the screenshot. " In response, Zhihu responded that "pinduoduo" is a registered user of Zhihu, whose identity is true and correct, and gave the specific release and deletion time of the post. 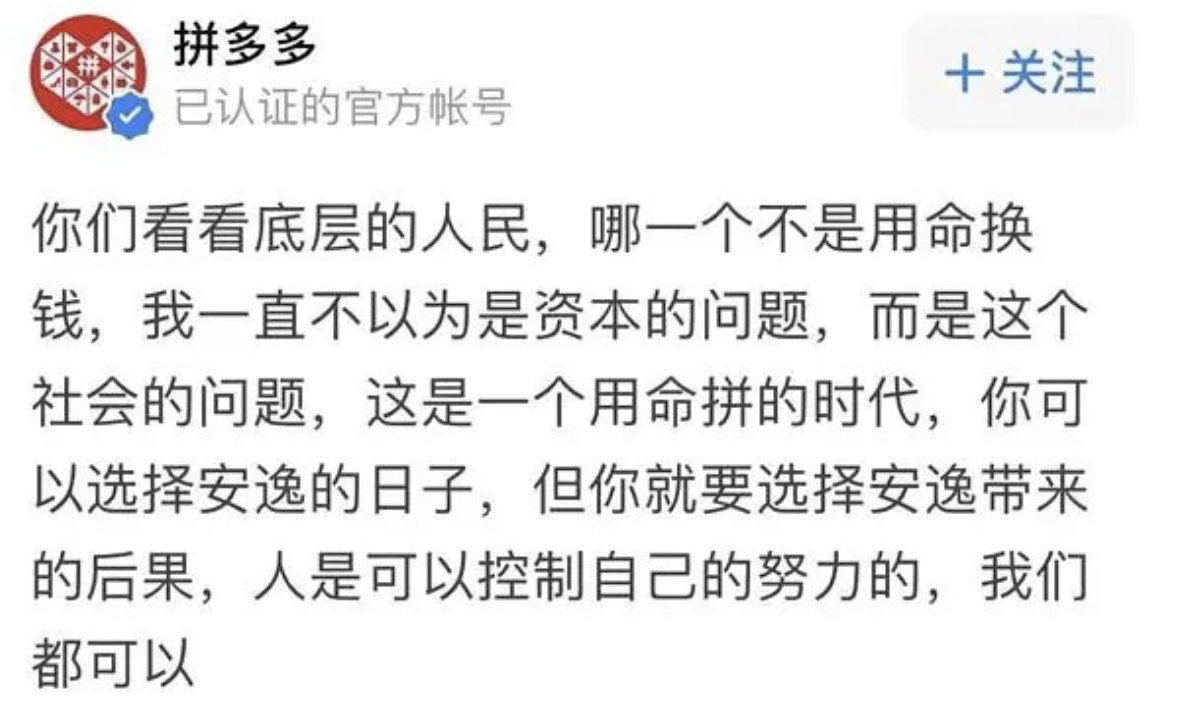 This morning, an anonymous netizen who claimed to be a good friend of the employee disclosed on the social platform that "that girl used to defend the frontier for Duoduo": pinduoduo's Xinjiang vegetable shopping girl suddenly died at 1:30 a.m. on her way to work, and she was only 23 years old. Does anyone really dare to say a word? What the hell is this company? May heaven have no pain, you can be a carefree girl.

Related news
Microsoft is under attack for trying to turn the "black lives matter" campaign into a PR victory
Instant Money Rituals to Become Rich Call 27836633417 ...
Strong Money Spells in United States (USA) | spiritual rats
DO U ALWAYS GET MONEY BUT WONDER HOW IT VANISHES CALL ON +27
Hot news this week
Full screen bomb is playing crazy wechat Android version 8.0 beta version comes with download
"Synthetic watermelon" became popular this weekend
Tesla's response to the spontaneous combustion and explosion of Shanghai model 3: preliminary judgment that the accident was caused by the collision under the car
Some users found that wechat 8.0 raised the upper limit of visible number of friends and circle of friends to 10000: wechat Lehua
China's auto chips stopped in Europe and America? Official response
IBM China Research Institute (IBM CRL) has been completely closed
Talk about "explosion"! Android wechat 8.0 internal test experience: is it the same as apple
Does the car Li Zi nucleic acid positive eat to be able to infect? The experts finally understood what they said
Collective rollover of 5nm chips: embarrassment of advanced manufacturing process
The official version of wechat Android 8.0 will be released next week
The most popular news this week
ZTE micro film "go ahead, always in" will be released soon
Sony's most expensive micro order, which sells 48000 yuan, meets your three big wishes for pixels, performance and video at one time
Sony's most powerful flagship Xperia Pro released in one year: the price is as high as 16000 yuan!
Arecibo is gone. Are we going to build Arecibo II on the moon?
You can repair your iPhone at any store. Apple is slowly blocking the road
NVIDIA RTX 3060 / 3070 mobile graphics card 3dmark time spy
[Download] stable version of Firefox 85.0 released: enhanced tracking protection, optimized bookmarks, simplified password management
Intel outsources some of its chips to TSMC: it prefers the latter's 3nm process, the source said
Biden signed an executive order authorizing the federal government to convert U.S. Postal vehicles into electric vehicles
Microsoft is expected to launch surface laptop 4 in April this year