In the morning of January 5, Zhihu's website showed that Zhihu's official account was banned for 15 days due to violation of Zhihu community management regulations. According to the screenshot of netizens, the account was once permanently banned. According to the settlement service agreement of Zhihu institution number, the right to use Zhihu institution number only belongs to the initial applicant. It is forbidden to give, borrow, rent, transfer or sell the right to use the account. Violation of the agreement will be punished.

Photo: Zhihu's official account has been banned for 15 days 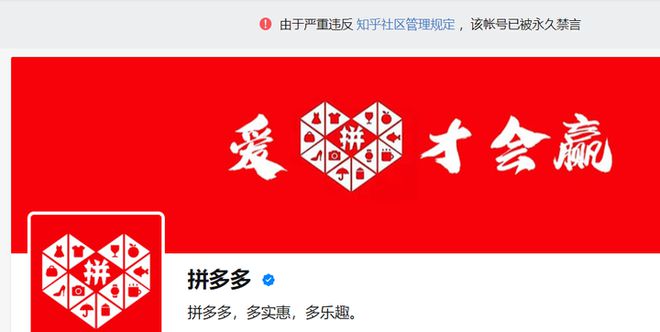 In the early morning of December 29, a 23-year-old female employee of pinduoduo died suddenly. On January 4, a screenshot of pinduozhihu's official message caused controversy.

In the screenshot, pinduoduo official said: 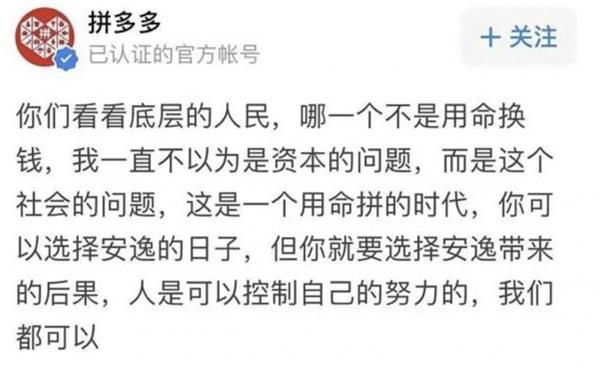 If you look at the people at the bottom, which one is not to exchange life for money? I always don't think it's a problem of capital, but a problem of society. This is an era of struggling with life. You can choose comfortable days, but you have to choose the consequences of comfort. People can control their own efforts, and we can all.

On the afternoon of January 4, pinduoduo responded to the incident, admitting the sudden death of the employee, and saying that after the incident, the company's colleagues had been accompanying their family members, complying with their parents' wishes and not making an announcement. But it also said it had never released an "official response" to an online screenshot.

However, Zhihu's official microblog later said that pinduoduo was a registered user of Zhihu and his identity was true. Zhihu has a strict identity authentication process and mechanism. At 8:19:49 on the 4th, pinduoduo released relevant contents, and at 8:20:17, pinduoduo deleted the above answers.

Pinduoduo said that the incident was caused by the company's lax control over official accounts, and the company sincerely apologized to the public.

The details of the incident in pinduoduo's statement are as follows:

(1) The content was compiled and released by the staff of pinduoduo brand marketing cooperation company "Li". On December 31, the employee participated in the content operation and other cooperative marketing tasks of pinduoduo's new year's Eve party, logged into pinduoduo's Zhihu official account with mobile phone, and maintained the login status.

(2) Li wanted to read the news on his mobile phone at 8:00 this morning. After replying, Li found that the publishing account was the previous institutional account, so he immediately deleted it. (the interval from publish to delete is less than 30 seconds.)

(3) The content was immediately spread by netizens screenshot, and was mistaken for pinduoduo official reply. In this regard, pinduoduo solemnly declares that Mr. Li is not an employee of pinduoduo and has not obtained any authorization. This behavior is non-compliance authorization to use pinduoduo's official account to express personal opinions, which does not represent pinduoduo's official attitude. After the incident, pinduoduo has suspended cooperation with the supplier, modified the password recovery account, and will further investigate the responsibility of relevant personnel.

(4) Pinduoduo firmly opposes the remarks made by Li. For the negative impact of the remarks, we once again express our sincere apology, and will immediately conduct a comprehensive investigation and rectification of the official account.

It seems that Zhihu thought pinduoduo "borrowed" his account number, so he banned it.

Related news
Herbal remedy for Herbes
Nintendo confirmed that 160000 Nintendo accounts had been hacked
Pinduozhihu account was banned for 15 days
Hot news this week
Full screen bomb is playing crazy wechat Android version 8.0 beta version comes with download
"Synthetic watermelon" became popular this weekend
Tesla's response to the spontaneous combustion and explosion of Shanghai model 3: preliminary judgment that the accident was caused by the collision under the car
Some users found that wechat 8.0 raised the upper limit of visible number of friends and circle of friends to 10000: wechat Lehua
China's auto chips stopped in Europe and America? Official response
IBM China Research Institute (IBM CRL) has been completely closed
Talk about "explosion"! Android wechat 8.0 internal test experience: is it the same as apple
Does the car Li Zi nucleic acid positive eat to be able to infect? The experts finally understood what they said
Collective rollover of 5nm chips: embarrassment of advanced manufacturing process
The official version of wechat Android 8.0 will be released next week
The most popular news this week
Jijia z590 main board collective listing: quadruple surprise, white pick 290 yuan
"Wechat red envelope cover" turned out to be a profiteering business, with some earning 100000 yuan a month secretly
WiFi 6 router that will make Jingdou money! First sale of redmi ax5 tomorrow: 269 yuan
The strongest combination of iPhone XR and A14 core! IPhone se plus rendering exposure
Andy Lau officially entered the tiktok, which is his first social account in the world.
ZTE micro film "go ahead, always in" will be released soon
Sony's most expensive micro order, which sells 48000 yuan, meets your three big wishes for pixels, performance and video at one time
Sony's most powerful flagship Xperia Pro released in one year: the price is as high as 16000 yuan!
Arecibo is gone. Are we going to build Arecibo II on the moon?
You can repair your iPhone at any store. Apple is slowly blocking the road