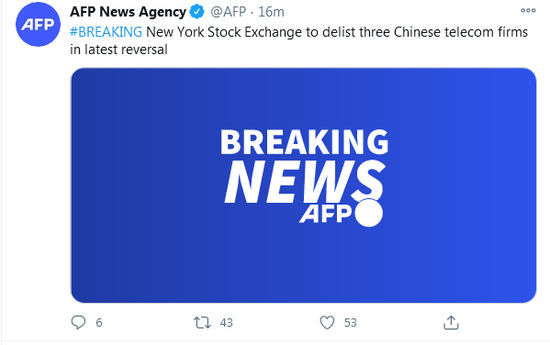 China's Foreign Ministry spokesman Hua Chunying said in response to the New York Stock Exchange's reconsideration of the plan to stop delisting the three Chinese enterprises due to the opposition of the US Secretary of Commerce on the 6th that on this issue, I have indicated China's principled position in two consecutive inquiries yesterday and the day before yesterday. I can emphasize once again that the status of the United States as an international financial center depends on the trust of global enterprises and investors in the inclusiveness and certainty of its rules and regulations. Recently, some political forces in the United States continue to suppress foreign companies listed in the United States for no reason, reflecting the arbitrariness, arbitrariness and uncertainty of their rules and regulations. The direct impact of the US crackdown on Chinese related companies is quite limited, and the ultimate damage will be the US national interests and image, as well as the global status of the US capital market. The United States hopes to do something beneficial to the stability of global financial markets and the protection of the legitimate rights and interests of global investors. I think that not only China but also other countries are looking at what the United States will do. The behavior of the United States will determine whether its image in the eyes of the people of the world is credible, reliable, and worthy of cooperation. 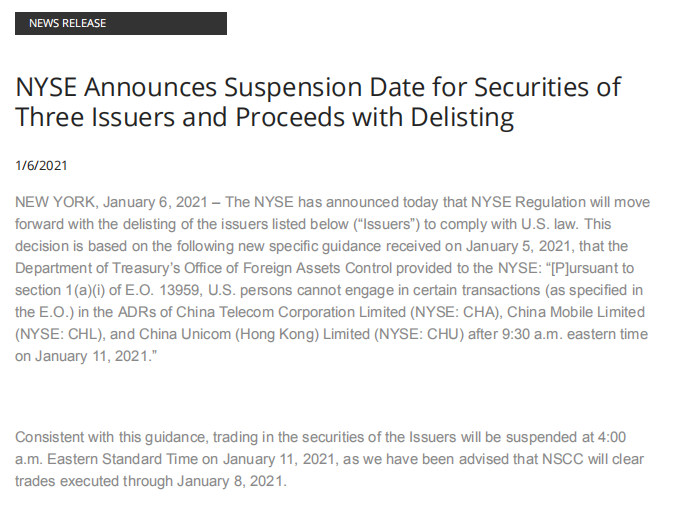 Related news
New tweets and old tweets can also be linked together
Three operators will be forced to delist from the US stock market after new year's day?
China Unicom: sorry for the decision of the New York Stock Exchange, but has not received the notice of stock delisting
The New York Stock Exchange no longer plans to delist the Chinese telecom giant, just three days after it announced its delisting
NYSE will continue to promote delisting of three Chinese telecom operators
China Unicom: disappointed that the NYSE has repeatedly overturned its own decisions
The English name of Chinese liquor has been changed: Chinese Baijiu has been officially launched
Hot news this week
Full screen bomb is playing crazy wechat Android version 8.0 beta version comes with download
"Synthetic watermelon" became popular this weekend
Tesla's response to the spontaneous combustion and explosion of Shanghai model 3: preliminary judgment that the accident was caused by the collision under the car
Some users found that wechat 8.0 raised the upper limit of visible number of friends and circle of friends to 10000: wechat Lehua
China's auto chips stopped in Europe and America? Official response
IBM China Research Institute (IBM CRL) has been completely closed
Talk about "explosion"! Android wechat 8.0 internal test experience: is it the same as apple
Does the car Li Zi nucleic acid positive eat to be able to infect? The experts finally understood what they said
Collective rollover of 5nm chips: embarrassment of advanced manufacturing process
The official version of wechat Android 8.0 will be released next week
The most popular news this week
16 hours long endurance! Lenovo real wireless Bluetooth headset price 59 yuan
More iPhone and other capacity will be transferred from China: India will produce new Apple 12
Take out the M1 core apple, this year may let Intel, amd laptop very uncomfortable
Jijia z590 main board collective listing: quadruple surprise, white pick 290 yuan
"Wechat red envelope cover" turned out to be a profiteering business, with some earning 100000 yuan a month secretly
WiFi 6 router that will make Jingdou money! First sale of redmi ax5 tomorrow: 269 yuan
The strongest combination of iPhone XR and A14 core! IPhone se plus rendering exposure
Andy Lau officially entered the tiktok, which is his first social account in the world.
ZTE micro film "go ahead, always in" will be released soon
Sony's most expensive micro order, which sells 48000 yuan, meets your three big wishes for pixels, performance and video at one time