According to the official microblog of the consular protection center of the Ministry of foreign affairs, the Chinese Embassy in Indonesia learned from relevant Indonesian authorities that there were no Chinese passengers on the lost flight.

According to CCTV news, on the afternoon of January 9, local time, a Boeing 737 lost contact shortly after taking off from Jakarta, Indonesia, with 62 people on board.

According to foreign media reports, a Boeing 737-500 airliner owned by sanfoqi Airlines took off from Jakarta on January 9 local time and lost contact a few minutes after taking off. The flight number of the plane is sjy182, and the fuselage number is pk-clc. It is a flight from Jakarta to kundian City, Kalimantan island.

According to the report, the plane disappeared from radar four minutes after taking off from Jakarta's Sukarno hada International Airport. According to flight information, the plane flew to Java Sea area in the north of Jakarta after taking off, and finally lost contact in the sea area near Raji island. Residents nearby said they heard the sound of explosion around 2:30 p.m.

Indonesia's Ministry of transport confirmed to the media that the passenger plane of Indonesia's sanfoqi airlines, which was lost on the same day, had crashed. 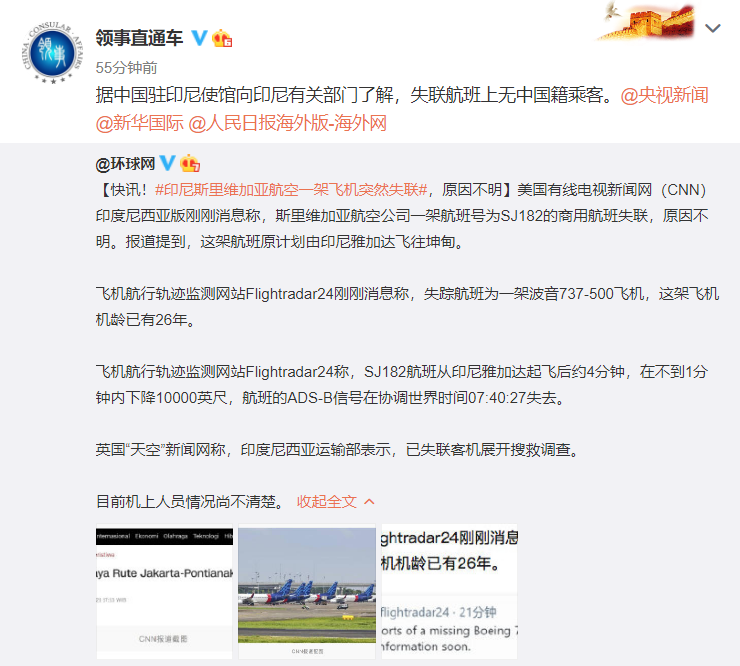