Why do Google and apple want you to install new systems 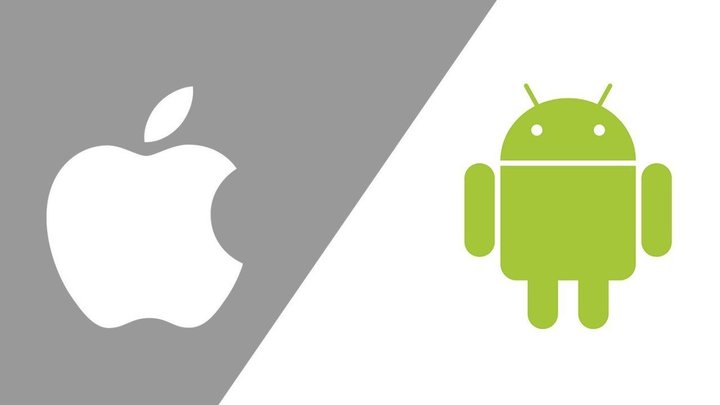 How few people care about Android 11 this year.

Indeed, compared with IOS 14, Android 11, as a new system, is not highly discussed on microblog and other social media. The reason is that IOS 14 has changed a lot in appearance and provided new features such as proraw. The reason is that Android system upgrade is relatively more fragmented and the upgrade rate is not as high as IOS.

Not long ago, Apple announced the development of IOS 14 systemUpdate dataThree months after the release, the new system's share has reached 72%, and the share of IOS 14 in the iPhone released in the past four years has even reached 81%. Android is still waiting for various mobile phone manufacturers to adapt Android 11 and gradually release updates. 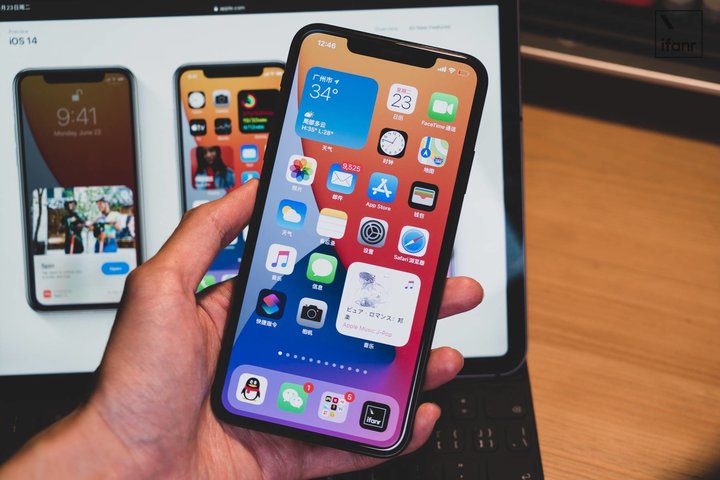 Google has been trying to solve this problem, and recently joined with QualcommannounceStarting from Xiaolong 888 chip, the company will jointly undertake part of the upgrade and adaptation work, so that mobile phones equipped with Qualcomm chip can support 4-year Android system update and security update, and improve the update speed.

So why do Google and apple want you to use the new mobile system?

It's product competitiveness and cash cow

In the past, when we talked about Android and IOS systems, most of the topics were about who was better, and the main argument was based on their respective functional features. Of course, iPhone and Android mobile phones will also be involved in this process. After all, software and hardware often cannot be discussed separately.

It can be seen from this that the system is actually a part of the product power of mobile phones. Both Google and apple hope to increase the product power through the new functions added by the new system, so as to encourage users to continue to buy their own products or stay in their own ecology. 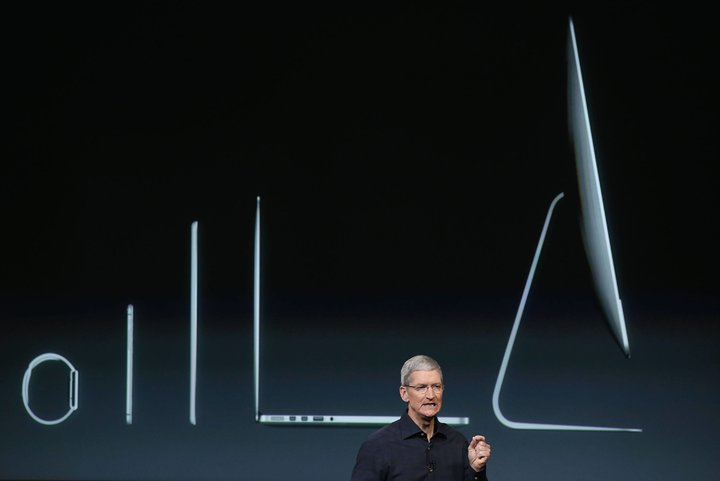 Apple is good at combining software and hardware to keep users in its own ecology.

Although the two have some similarities in recent years, the desktop widgets introduced by iOS 14 are much like the previous functions of Android and TAC, but the difference between them is still small. The iOS system is still more closed than Android, which is one of the reasons that make complaints about Android or iOS.

Even if the market share of Android and IOS gradually solidifies, it is still significant to keep users. This value will be realized in the system ecosystem.

Nowadays, no matter Apple or Android mobile phone manufacturers, selling mobile phones is not only about buying hardware, but also about selling services. Google account, Gmail, Google search and other components of the Google ecological global bucket, most users are absorbed through Android users. 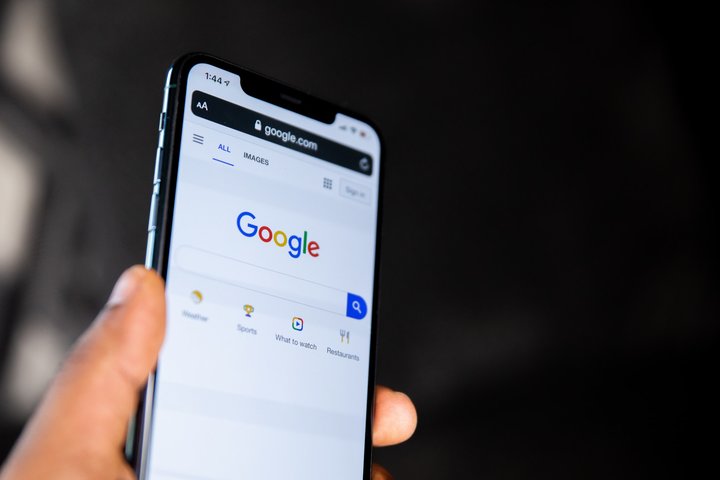 By adding features, users can stay in Google's ecosystem, which not only increases the number of users of Google products, but also makes the advertising business of Google search, youtube and other products better realized. 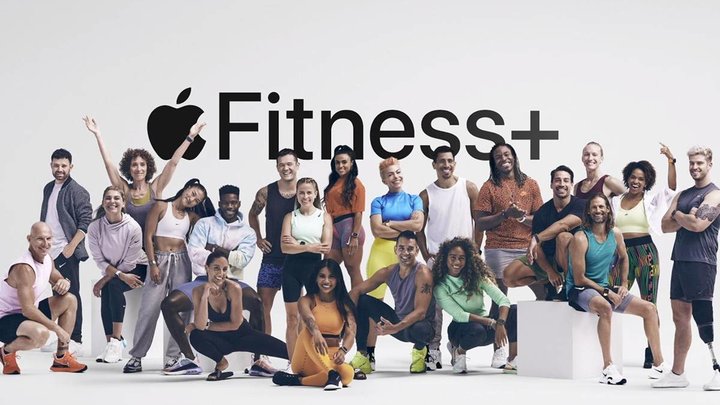 Mobile phone operating system make complaints about the iOS 14 update rate. The scope of this promotion is also very broad. Before the user Android manufacturers made pre installed third party application software on mobile phones to get their income, the biggest preinstalled service providers were the controllers of Google and apple mobile systems.

Huawei, oppo, vivo and other mobile phone manufacturers are getting props sales commission income through game channel services. The browser push of mobile phones also includes some advertisements. This part of income also requires users to stay in the ecosystem and continue to buy the next mobile phone. 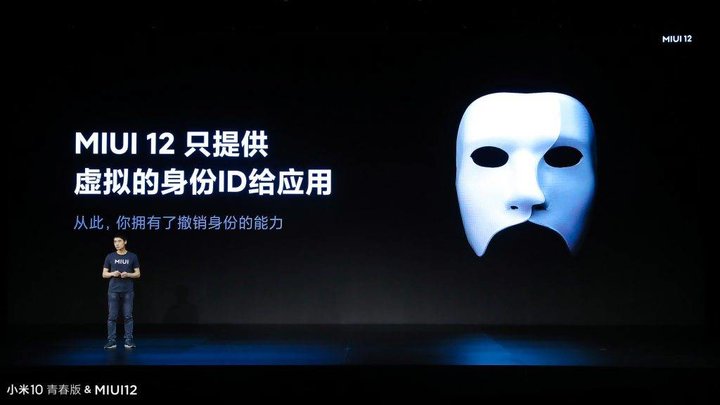 Xiaomi's "privacy mask" function on MIUI system and Huawei's multi screen collaboration function are all the unique features of each family's ecology, which are to enhance their hardware capability and software capability, and to break away from Android system.

These will be the reasons why users choose mobile phones and even keep choosing a certain brand. They will bring a steady stream of revenue to Google, apple and even mobile phone manufacturers who customize Android system.

But don't underestimate security updates. To some extent, security is the core reason why Google and apple want users to update their systems. After all, the mobile phone contains more and more data nowadays, not just user photos, mail and other private information, but also digital wallets like Alipay and WeChat. 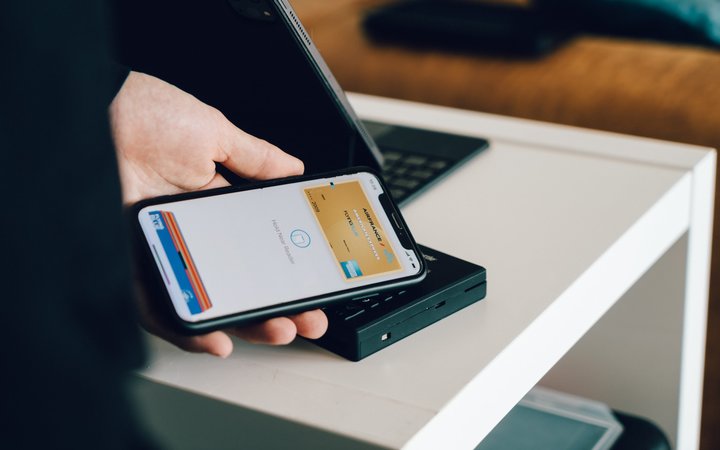 Once the system vulnerability is found by hackers, and then control the user's mobile phone, the loss of privacy and financial data and even money will be great. For Google and apple, this can be said to be a fatal blow, and the user's trust in them will be greatly reduced.

In mid May 2020, apple blocked a system vulnerability caused by airdrop function. Hackers can quietly invade the iPhone through the Bluetooth function when airdrop is turned on. The whole process is only about 2 minutes, and users can't perceive it, which is equivalent to personal privacy and financial wallet. These data are displayed in front of hackers.

Ian beer, a security researcher at Google project zero, demonstrates how to control iPhone in isolation

Fortunately, apple is still using system update to plug this vulnerability in time. This behavior of plugging the vulnerability through system update will not end, because there will always be the next vulnerability. Apple's loophole reward program for this, the maximum bonus even reached $1 million.

Such incidents are common on the Internet. Recently, the vulnerability that Google patched in 2018 has been mentioned again by twitter officials and sent notices to users. It is because some users do not update the new system and there is a risk of divulging private data.

As the controllers of the system, Google and apple failed to plug the loopholes in time, which directly damaged the privacy and money of users. At the same time, with the development of the event, it will also cause a series of chain reactions. 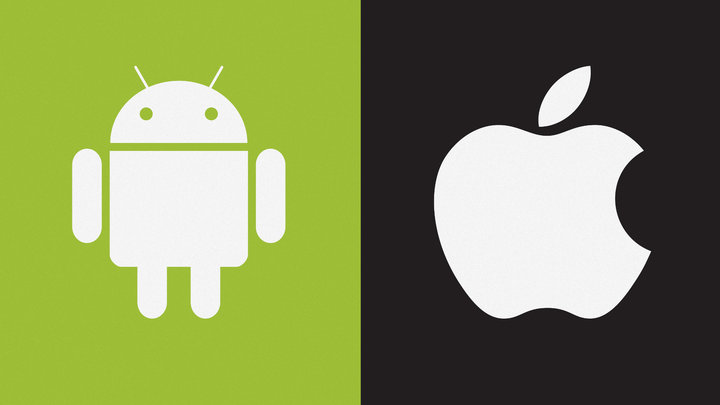 At the beginning of the 21st century, Internet Explorer had a market share of more than 95% by virtue of its pre installed binding relationship with windows, but due to IE6 There are many loopholes, which are easy to be attacked by hackers, and there have been many cases of users being attacked in the market. Finally, even the government units in Germany, France, the United States and other countries and regions suggest that the public use other browsers.

This directly led to the rise of more secure browsers, such as Firefox and opera. The market share of IE browser was once reduced by 85%. Coupled with the backward functions, Microsoft finally lost the browser war and was seized by the latecomer chrome. 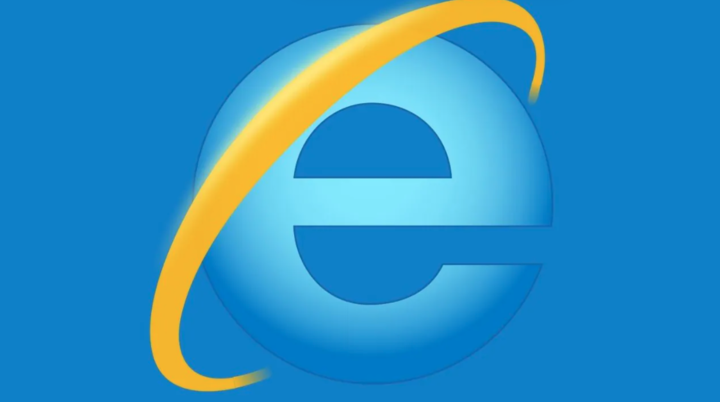 What kind of system update mode do we need

Although Google, apple and even many mobile phone manufacturers are pushing forward the new system, the attitude of users to upgrade is still inconsistent. Maybe everyone has different opinions on whether to update or not.

On the one hand, people are worried that upgrading the new system will reduce the battery life of the mobile phone, or the new system has higher requirements for the performance of the mobile phone, and the upgrading will cause the mobile phone that used to operate smoothly to jam. Of course, some people are willing to constantly upgrade the system. After all, there are many people who like to try new functions, which is also one of the biggest motivations for users to upgrade the system. 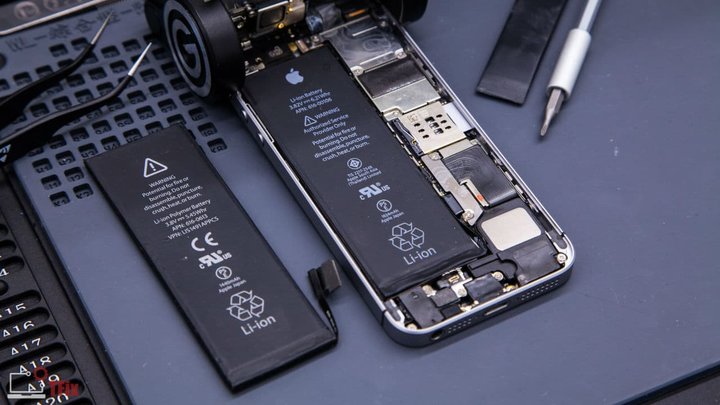 At this stage, we still suggest that you update as much as possible. On the one hand, system updates include common security updates, which are very important for the daily use of mobile phones. The risks that may be brought by vulnerabilities are also mentioned above. Of course, here you can also take a detailed look at whether the system update profile contains the content of vulnerability repair.

Moreover, if the system is too old, it will also affect the use of the software. Now when you open the app store, you can find that the version of IOS system supported by apps like "light face camera" is more than IOS 10, and more popular games like "Yuanshen" are only IOS 9.0 or above, and the latest version of wechat requires IOS 11.0 or above. 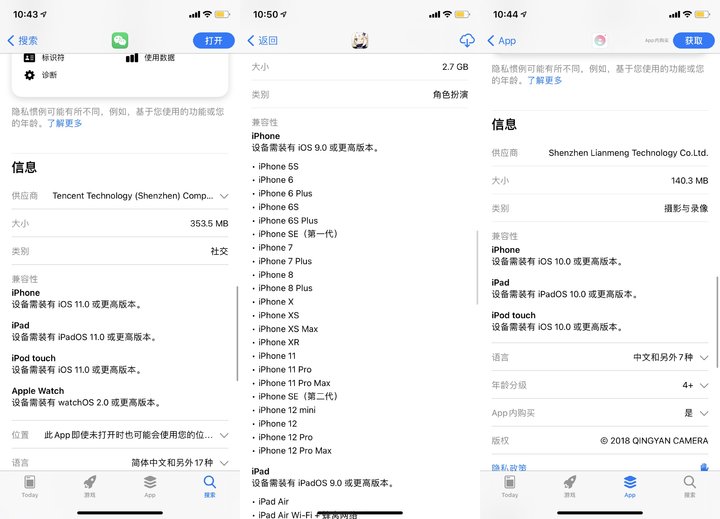 From left to right, they are wechat, Yuanshen and Qingyan cameras

Oppo, Huawei and other mobile phone manufacturers stressed at the press conference that mobile phones have a long service life and will not get stuck. It is also based on the user's usage and needs to strengthen the uniqueness of their products to attract users.

In contrast, the IOS system next door has a longer system update and maintenance cycle. The iPhone 6S series released in 2015 can now be installed with the latest IOS 14 system, with an update cycle of up to five years. 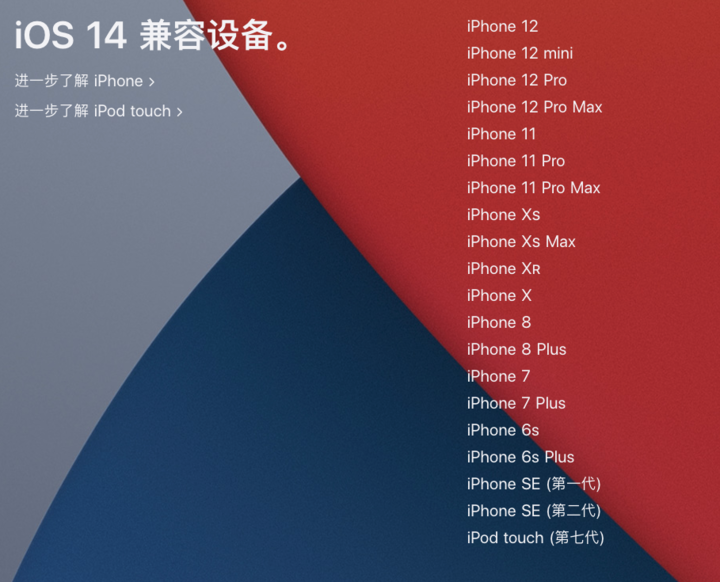 In the time of upgrading the system maintenance cycle, the company can also make complaints about the way to update it, which is often updated by Tucao Windows 10.

At the end of November, Microsoft published a blog saying that it is testing a function called "windows feature experience pack", which will deliver some new functions to users in the form of independent updates, so that users can try new functions without updating the system.

Apple actually has a similar case on the MAC side. System software such as Safari can also be automatically updated in the form of software.

Perhaps, in the future, we can see that both security updates and software updates are pushed in an independent form, which can not only maintain the long-term security of old devices, but also enable some users who like to try new ones to use new functions.

Longer system update and maintenance cycle and flexible update strategy are the directions that science and technology companies need to pay attention to. After all, as users, no one wants to continue to use their mobile phones because of the system when their hardware is good.

Related news
Hot news this week
Full screen bomb is playing crazy wechat Android version 8.0 beta version comes with download
"Synthetic watermelon" became popular this weekend
Tesla's response to the spontaneous combustion and explosion of Shanghai model 3: preliminary judgment that the accident was caused by the collision under the car
Some users found that wechat 8.0 raised the upper limit of visible number of friends and circle of friends to 10000: wechat Lehua
China's auto chips stopped in Europe and America? Official response
IBM China Research Institute (IBM CRL) has been completely closed
Talk about "explosion"! Android wechat 8.0 internal test experience: is it the same as apple
Does the car Li Zi nucleic acid positive eat to be able to infect? The experts finally understood what they said
Collective rollover of 5nm chips: embarrassment of advanced manufacturing process
The official version of wechat Android 8.0 will be released next week
The most popular news this week
ZTE micro film "go ahead, always in" will be released soon
Sony's most expensive micro order, which sells 48000 yuan, meets your three big wishes for pixels, performance and video at one time
Sony's most powerful flagship Xperia Pro released in one year: the price is as high as 16000 yuan!
Arecibo is gone. Are we going to build Arecibo II on the moon?
You can repair your iPhone at any store. Apple is slowly blocking the road
NVIDIA RTX 3060 / 3070 mobile graphics card 3dmark time spy
[Download] stable version of Firefox 85.0 released: enhanced tracking protection, optimized bookmarks, simplified password management
Intel outsources some of its chips to TSMC: it prefers the latter's 3nm process, the source said
Biden signed an executive order authorizing the federal government to convert U.S. Postal vehicles into electric vehicles
Microsoft is expected to launch surface laptop 4 in April this year