A spokesman for Japanese automaker Toyota Motor said the company suspended production lines at its Guangzhou plant in China as global chip shortages continue to plague global car makers.Nikkei news didn't point out earlier on Tuesday. According to the source, the shutdown could lead to a production cut of up to 30% in January, depending on the duration of the shutdown. 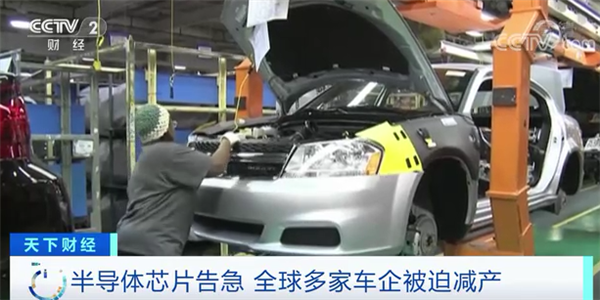 Toyota has told some suppliers that the suspension will last for four days.

Toyota spokesman Shino Yamada said it was unable to provide details on when the production line would be resumed and the overall impact of the suspension on production.

Volkswagen will adjust its output due to chip shortage and spread to China, North America and Europe

Due to the shortage of chips, many auto companies around the world are forced to reduce production, and traditional giants are affected one by one

Toyota says chip shortages affect factory production in Texas, and production of Tantu trucks will drop by 40% this month

Related news
Toyota has purchased 50,000 Tesla batteries from Panasonic and will sell the new Carola to China.
Semicon China: Huawei and Exxon bring semiconductor intelligent quality inspection and measurement solutions
B Station First CHINA-Z 100 Top Ten Products: HuaweiP40、 Xiaomi Purifie
Continental: the automotive supply chain bottleneck caused by chip shortage may last until next year
Ford's Kentucky plant will shut down this week due to a shortage of semiconductor chips
Toyota has suspended production lines at its factories in China due to a shortage of parts
First! Subaru stopped production in Japan due to chip failure
Global lack of "core": can China's automobile meet the "core" opportunity?
Hot news this week
Yingchi b560 / h510 series motherboard comes with shock!
The first mass production scroll screen mobile phone is set! LG confirms to release this year: or adopt BOE screen
Trumpra black millet! In the last week of his term, he also asked us investors to withdraw their capital before the "double 11"
What is the experience of working in a big factory? Huawei, Alibaba and Baidu employees said so
Raise your hand and pay directly! Huawei smart payment added wechat payment: mate 30 / 40 series can be used
SpaceX's second generation cargo dragon spacecraft has been docked at the international space station for more than one month
Young man engraves characters on 0.15mm hair with naked eyes
New crown super disease found abroad: 18 kinds of mutated virus hidden in a woman's body
Goldman Sachs "touts" Tesla wildly: failure recall of central control does not need to care about reiterating "buy" rating
CES 2021: Kingston introduces new nvme SSD and USB 3.2 mobile SSD
The most popular news this week
Win10 appears serious blue screen vulnerability, 360 security guard takes the lead in realizing automatic immunity
Trump's departure pressure dissipates, Brazil considers Huawei's return to 5g bidding
Shanxi people line up to make vinegar
AMD: ps5 / Xbox x sells well beyond expectation
What software should you use to control your hardware? One article takes you to understand Yingchi software
Tesla's first response to the price reduction of model Y: it's not the price reduction, but the domestic version is the first sale
Supply chain news: BYD Electronics will work for glory mobile phone! The output exceeds 50 million sets
Alipay pushes the epidemic through train: it can handle 15 types of epidemic services at one key.
Li Bin: Tesla's price reduction strategy is not suitable for Weilai, and apple is its long-term rival
American health expert: people should adjust their daily habits to cope with the new crown mutation "super virus"