A man in the United States announced his financial freedom on Friday and retired at the age of 39. Because he bought shares of Tesla when its share price was only $7.50, and then bought them again and again, and now he is worth nearly $12 million."Today, at 39, I retired from business," the Amazon employee, Jason debert, posted on social media. I will not sell any Tesla shares for the foreseeable future. " 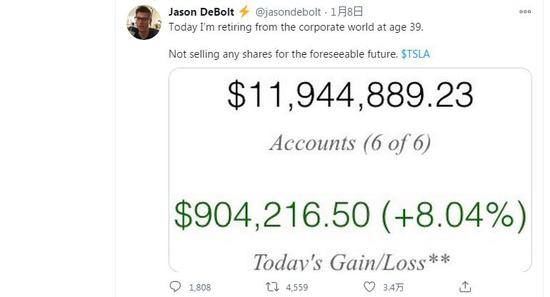 He currently owns nearly $12 million worth of Tesla shares.

"Tesla is just getting started," debert said. In the next 50 years, we may not see a company like Tesla. "

Related news
Today at Apple will add a new AR experience series course
"Vita Jun of primary school students" will visit today at Apple children's programming Laboratory
NVIDIA classic computing card series Tesla to be renamed: too confusing with Tesla
Hot news this week
Yingchi b560 / h510 series motherboard comes with shock!
The first mass production scroll screen mobile phone is set! LG confirms to release this year: or adopt BOE screen
Trumpra black millet! In the last week of his term, he also asked us investors to withdraw their capital before the "double 11"
ASUS launches Rog flow x13, Zephyrus duo 15 Se and Strix scar 15 / 17 playbooks
What is the experience of working in a big factory? Huawei, Alibaba and Baidu employees said so
Raise your hand and pay directly! Huawei smart payment added wechat payment: mate 30 / 40 series can be used
SpaceX's second generation cargo dragon spacecraft has been docked at the international space station for more than one month
Young man engraves characters on 0.15mm hair with naked eyes
New crown super disease found abroad: 18 kinds of mutated virus hidden in a woman's body
Goldman Sachs "touts" Tesla wildly: failure recall of central control does not need to care about reiterating "buy" rating
The most popular news this week
Tesla's first response to the price reduction of model Y: it's not the price reduction, but the domestic version is the first sale
Supply chain news: BYD Electronics will work for glory mobile phone! The output exceeds 50 million sets
Alipay pushes the epidemic through train: it can handle 15 types of epidemic services at one key.
Li Bin: Tesla's price reduction strategy is not suitable for Weilai, and apple is its long-term rival
American health expert: people should adjust their daily habits to cope with the new crown mutation "super virus"
Wechat input method is under development
Amd Ruilong r7-5800g desktop APU exposure: eight core Zen 3 CPU, enhanced Vega core display
Zhang Xiaolong may not have thought that wechat would become what it is today
Tiantong-1 03 successfully launched, China Aerospace ushered in a good start in 2021
Want to replace OLED! Mini LED will be commercialized on a large scale