Can baidu save Geely new energy? 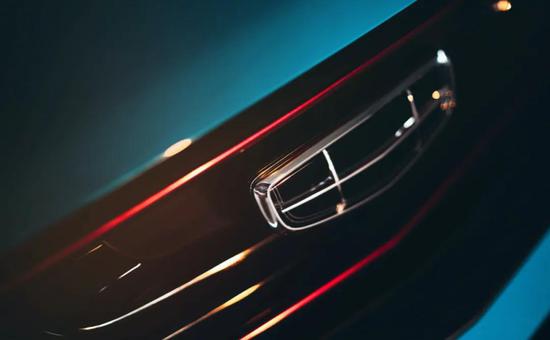 However, now that five years have passed, Geely's achievements in new energy are far from the goals it set in the past.

The official account of Baidu WeChat released on Monday is "yes! Baidu is going to build a car "article, announced the formal establishment of a smart car company, as a vehicle manufacturer to enter the automotive industry, and the new company's strategic partner is Geely Holding Group. 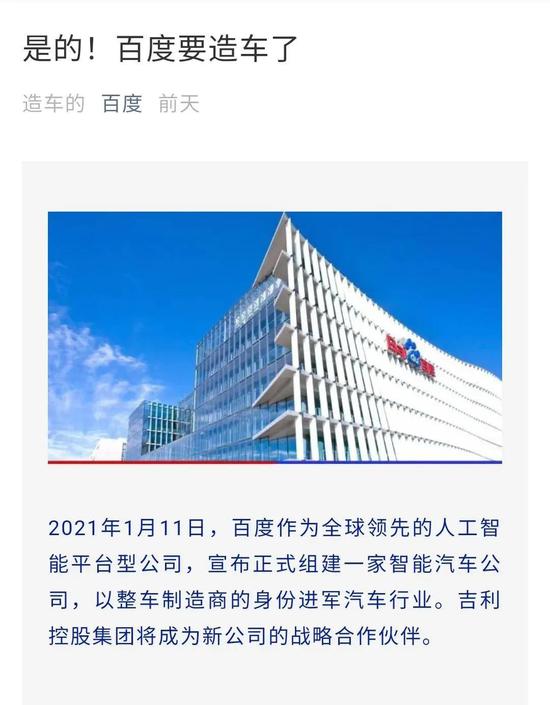 After Baidu officially announced the cooperation news, the two stocks both rose.

Baidu's share price rose 9.06% at the close of U.S. stocks on Tuesday, while Geely's share price opened 3.31% higher on Monday morning, reaching HK $35.5 per share in the session, once a record high.

The boots made by Baidu finally landed.

As early as mid December last year, according to Reuters, baidu is considering making its own electric vehicles, and has held preliminary talks with Geely, GAC and FAW, but has not reached any substantive agreement.

At that time, although all parties were silent, on the 7th of this month, according to Reuters, baidu was planning to establish a joint venture with Geely to build a smart electric vehicle company.Affected by the news, Geely motor shares in Hong Kong rose as high as 20%. 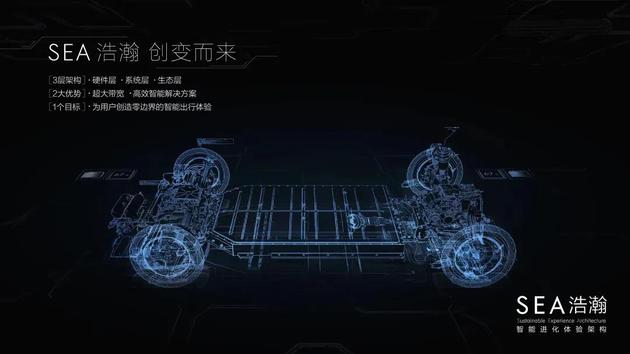 In terms of the resources provided by both sides, Geely and Baidu both give the part that the other side lacks, which is a good complementary.After all, for car manufacturing, Baidu has no manufacturing capacity, while Geely, as a traditional car company, also has shortcomings in intelligent software.

According to relevant media reports, at that time, Li Shufu sat on the PRO of Bo Yue and Robin Li at the scene. He carried out a live connection through the small vehicle system in the car, and demonstrated the various functions of the vehicle interaction.The cooperation of the two became the news that the media were competing to report at that time.

In addition, Li Shufu and Robin Li jointly announced that Geely Holding and Baidu will launch comprehensive strategic cooperation in the field of automobile and travel, including AI, intelligent driving, smart home furnishing and e-commerce. According to Li Shufu, starting from Geely Boyue pro, Geely will start to fully carry the gkui19 system which integrates small vehicle interaction system.

In July 2019, ECAT and Baidu Apollo formally signed a strategic cooperation agreement. According to the agreement, the two sides will continue to carry out in-depth cooperation in small vehicle, AI brain, voice technology, vehicle map and other fields.According to the enterprise survey data, ECAT technology is an independent automobile intelligent technology company incubated and invested by Geely.

It is precisely because of such cooperation that the cooperation between Geely and Baidu also expanded to the capital level last year.

In October last year, ECAT announced the completion of a round of financing worth 1.3 billion yuan. According to the data of enterprise investigation, one of the leading investors in this round of financing is Baidu investment department. As a result, this investment is also seen by the industry as foreshadowing for the cooperation between Geely and Baidu in car building.

Baidu leads to invest in technology information of ECAT, and check the screenshot from the enterprise

Now it seems that perhaps it is because of such a series of cooperation that Geely stands out from the alternative partners such as FAW and SAIC and becomes a strategic partner of Baidu. And this, for Li Shufu, is crucial.

As early as in the 2019 Baidu AI developer conference, he expressed his praise for Baidu's AI.

For Li Shufu, who has been in the car circle for many years, naturally he has seen this.

So a year later, Li Shufu did two things.

Emgrand evIn contrast, Tesla had just entered the domestic market at that time, and Weilai, ideal and Xiaopeng had just been established. 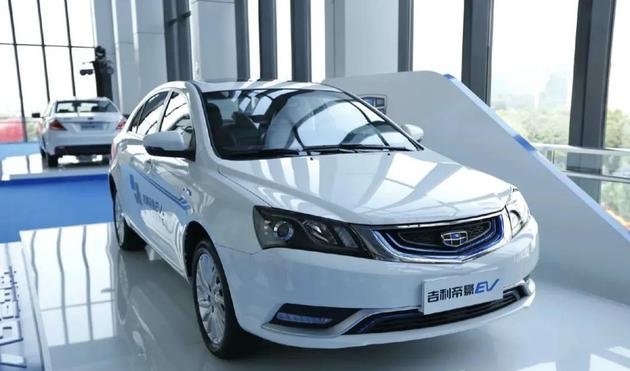 In fact, Geely took a shortcut to launch the emgrand EV so quickly.

In short, the engine, fuel tank and other traditional power devices in the fuel vehicle will be replaced by motor, battery and other components, and the whole vehicle chassis will not be redesigned. For automobile enterprises, this can not only reduce the R & D cost of pure electric vehicles, but also speed up the R & D progress, launch products as soon as possible and seize the market.

At that time, there were not many competitors in the domestic new energy market that could compete with Geely. Just because of this, according to the data of the passenger car Association, this car sold more than 40000 vehicles between 2015 and 2016.

With such success, Geely launched the pure electric SUV emgrand GSE in 2018.

The main reason for this phenomenon is that the domestic new energy market at that time has changed compared with 2015. 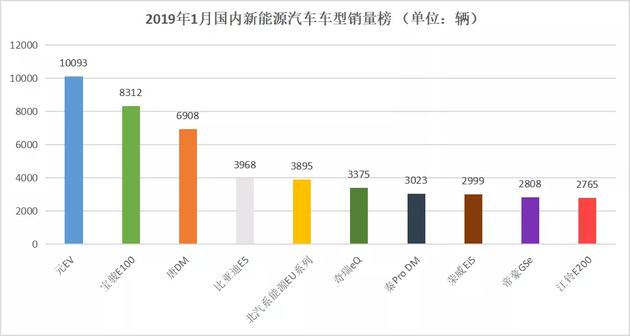 Geometry a is not as good as imperial GL.According to the data of the passenger Association, the annual sales volume of geometry a in 2019 was 12662, while last year, the monthly sales volume basically did not exceed 500. In contrast, the sales volume of emgrand GL in 2019 is 74775 vehicles, which is almost six times that of geometric a.

Normally speaking, after encountering the failure of geometry a, the following models must take a new road.

Geometric A and geometric C sales decline, the problem is pricing. Although this brand was named high-end new energy brand when it was released, the price range of these two cars is between 100000 and 200000. In this price range, there are not only strong competitors such as Xiaopeng G3 and BYD song, but also models such as GAC new energy AION.

Geometric A / C compares the prices of Xiaopeng G3, BYD song and GAC AION. The data comes from auto home and is connected to travel map

According to the enterprise investigation, the main body of maple leaf automobile is Fengsheng automobile technology group, and the largest shareholder of the company is Geely Technology Group Co., Ltd., accounting for 77.995%. In fact, Geely took a stake in Fengsheng as early as 2016, but at that time, Fengsheng was also called Kangdi electric.

According to the statistics of online travel, only 1893 vehicles have been sold since the official launch of maple leaf 30x to the end of November last year, while the same level BYD yuan and Nezha No1 have sold 6254 and 3480 vehicles respectively from July to November.

Liu Kai, a practitioner in the new energy automobile industry, said to the online travel.

Internal friction among brands under the development of multi brands.

Take Dihao new energy series and geometry series as examples. According to the data of auto home, the price range of the former is 109900-159900, while that of the latter is 129800-190000. In addition to the similar price, geometry a and Dihao EV are both compact, geometry C and Dihao GSE are both compact SUVs.

The problem is there, but Geely has not solved it.

Polar Star 2 (left) and geometry a

In such a similar situation, the price of polar star 2 is nearly 150000 higher than that of geometry a. It can be foreseen that geometry a has more advantages in the same positioning and configuration.

This means that after the launch of this model, the first competitors are not the models of other car companies, but their own Dihao new energy series and geometric series, and internal friction will continue to exist.

Because of this, Geely's entire new energy vehicle business is not in the domestic new energy market, and has fallen into a dilemma.

In the face of such a dilemma, Geely has to start to help himself.

Can baidu save Geely new energy?

According to relevant media reports, both EHL EV and EHL's fuel vehicles were born based on Fe platform; GE R & D platform, which is used to develop geometric series, is also a common platform for EHL EV and EHL GSE. 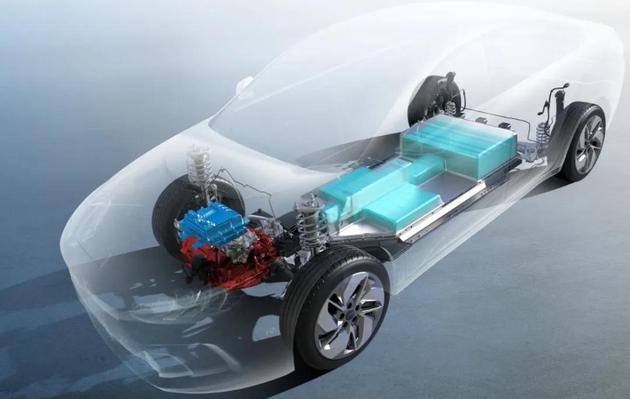 At the same time, Geely also claims that Haohan can shorten the development time of software by more than 50%, and can realize highly automatic driving on the open road by 2023.

According to the plan announced by Geely, based on this platform, research and development of 7 brands and more than 16 new models including smart and link have been started, and different market segments will be arranged in the future.

In this regard, the industry is skeptical.

Although Geely has launched the sea platform, many of its models are developed through the previous platform, and there is not much accumulation in automobile intelligence and automatic driving.

Take automobile intelligence as an example. According to the data of auto home, the new energy models of Geely new energy, such as Dihao, geometric series and linker,In addition to geometry a with OTA upgrade, other models do not have this function. And this function has become the most critical function of intelligent vehicles.

In the view of the industry, it is very likely that with Baidu's blessing, Geely new energy will make up for the lack of intelligent and automatic driving software.

However, this does not mean that Geely's dilemma in new energy can be saved, because compared with this aspect, the internal friction caused by multi brand development is more fatal.

In other words, Geely has become the actual controller of Lifan, although it has no official announcement.

After all, from the perspective of cooperation agreement, baidu dominates the joint car building, while Geely is just a partner.A smart car industry practitioner expressed his concern about online travel. 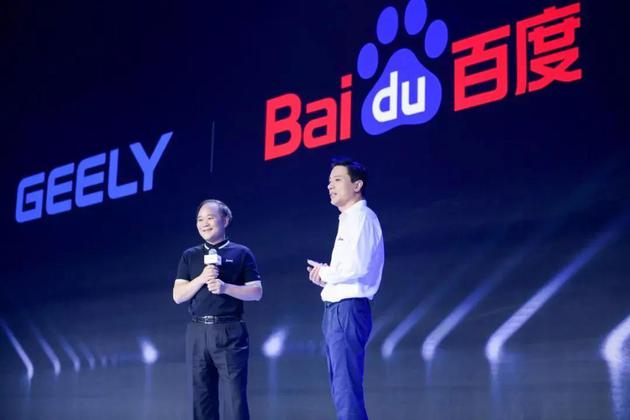 In addition to the internal dilemma, Geely new energy is also facing more and more competitors in the market.

Tesla launched the domestic model y, Weilai and Xiaopeng this year, and they have also launched electric cars et7 and P7. These models are better than Geely's mass-produced new energy models in terms of intelligence, which is a huge threat to Geely.

In addition, the great wall and BYD, which are both domestic independent car companies, as well as their own Euler cars and BYD Tang cars, are also rivals that Geely new energy can't despise. These two models often ranked in the top of last year's new energy vehicle sales list.

For Geely new energy, the competition will be more intense in the future. With Alibaba and SAIC, Huawei and Chang'an and apple and Hyundai entering the market one after another to build cars, how many markets will Geely be able to seize in the future?

(the top picture of this article comes from Geely Auto official micro, in which Liu Kai is a pseudonym.)