The influence territory of technology giant's car circle: Baidu and Ali all want to build cars, while Foxconn still takes the OEM route

By sun Shi of Tencent Technology

The drawing number is visible 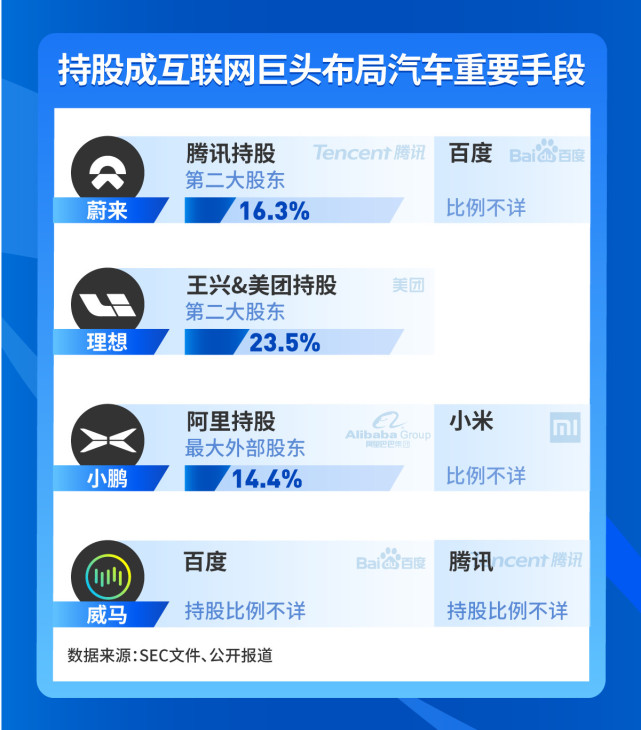 For Internet companies, it has become a routine operation, or the most direct means, to invest in a new field.

At present, the shadow of Tencent, Alibaba, Baidu and meituan can be seen behind the three listed domestic new energy vehicle companies: Weilai, ideal and Xiaopeng. Among them, Tencent, Ali and meituan are the major shareholders of Weilai, Xiaopeng and ideal respectively.

In addition, according to the information released before Weilai's listing, Liu qiangdong still has certain shares in Weilai, but the latest sec documents do not show Liu's shareholding ratio.

As an unlisted company, Weima has not announced the specific shareholding ratio. However, according to past media reports, Tencent once led Weima, and in October 2020, baidu invested heavily in Weima. 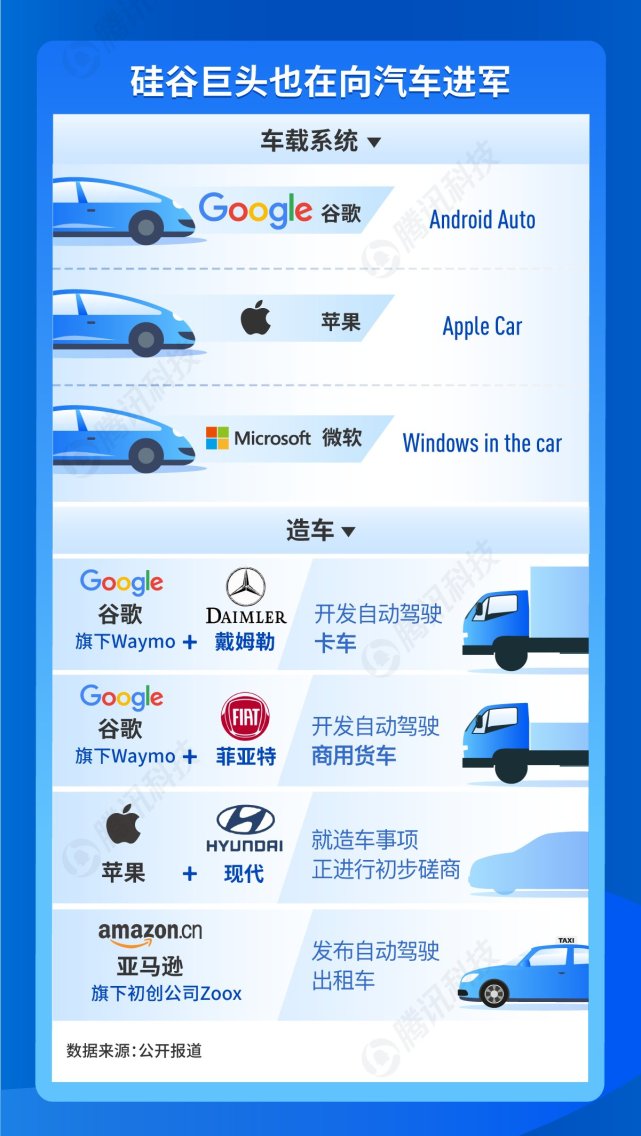 At the same time, Silicon Valley giants are also expanding in the automotive sector. Apple, Google and Microsoft all launched on-line vehicle systems. In terms of car making, the news about Apple auto has been rampant for some time, and even Hyundai Auto accidentally let slip, saying that it had had preliminary discussions with apple.

In addition, waymo, a self driving company of Google, is also seeking cooperation with traditional car companies such as Daimler and Fiat to develop self driving models.

Amazon, another Silicon Valley giant, launched its self driving taxi through its start-up company zoox, which is regarded as the first company in Silicon Valley to have an independent model.

Related news
The linely group's best mobile processor of the year: God u Kirin 810 wins the title
What does windows 10 OEM channel mean to say goodbye to 32-bit version?
How to prevent OEM manufacturers from killing background applications? Android 11 releases several initiatives (Figure)
Google will start naming Android OEMs that use unsafe software
Maybe we'll see the apple car in nine months
Hot news this week
Capital does not love SAIC, "flying" subsidiary, Jet Hydrogen Technology intends to go to science and technology board
Wechat: It will not be possible to create an account for controlling comments and Revelations related to star artists
WeChat Alipay personal collection code will not be used for business collection, digital currency sector rises
Big bang! Wechat, Alipay personal payment code can not be used for business payment, what is the impact on you?
1.6 billion yuan too cheap? BMW's $1.6 billion takeover of Brilliance's Factory in China has been called off
Interpretation of the more than Q3 financial results: dead agriculture shrink self-employment, transformed into "more farmers"? | the planet of wealth
From March 1 next year, the personal payment code of wechat Alipay will not be used for business payment
Is it the brother who 'cuts' me? The blue-moon issuer has cut jobs, with some employees saying the year-end bonus won't be awarded
Exclusive | New Oriental new Progress: in the United States to open Chinese line classes subsidiary to undertake the transformation
European Telecom I hope that the US science and technology giants bear the cost of network construction
The most popular news this week
Intel discrete graphics name, performance exposure: chasing NVIDIA two years ago
Xiaomi's first 4K new product hits! It is highly recommended
Mobile phone storage is really not the bigger the better 18GB ordinary people can not use
The next generation of OS Stable Edition is ready! Xiaomi 12 is perfect
Microsoft is doing something again: overlord means to make Windows 11 users speechless....
Xiaomi Qualcomm 8 Series gods were bought out by foreigners! Direct laughter black five
Qualcomm Snapdragon game development kit is officially released: with an "exclusive" game chip
Apple recommends that the US government takes tariff exemptions to some components of Apple Watch and Mac PRO.
The largest mass "double star" black hole ever discovered, close to Earth?
Li Jia qi wei ya pay attention to your professional standards!