The European Medicines Agency (EMA) warned that information on drugs and vaccines related to the covid-19 had been stolen in December last year in a cyber attack and leaked online earlier this week, including a letter that had been tampered with before its release "to undermine public trust in vaccines.".It's not clear how this information - including schematic drug structure diagrams and correspondence related to the evaluation process of the covid-19 vaccine - has been tampered with. 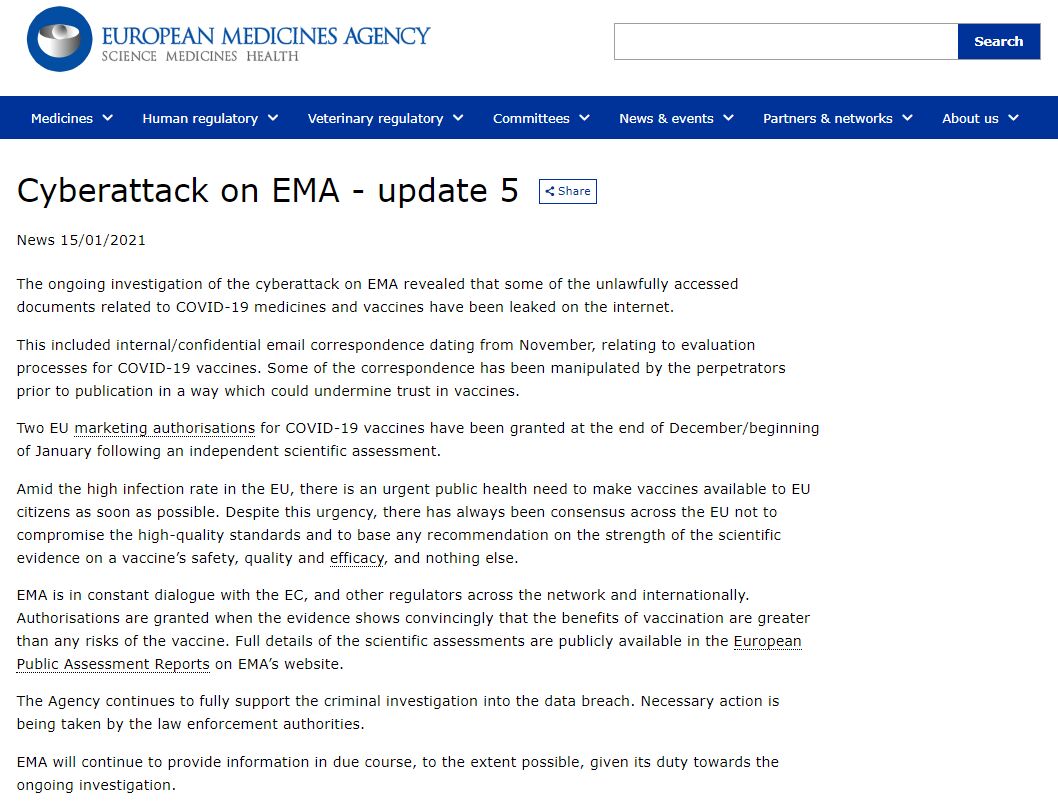 Lukasz Olejnik, a security researcher, raised concerns about the leak through Twitter, saying that the tampered data would be "the best choice to sow distrust" because the biotech language involved in the leaked letter would not be widely available. Similarly, it seems that the high professional threshold required for the correct parsing of data may limit the extent of damage of the manipulated version by limiting its viral appeal. However, it is worth noting that EMA has raised concerns about the trust risk of the new vaccine. "After independent scientific evaluation, the EU has approved the marketing authorization of two covid-19 vaccines in late December / early January," EMA wrote in its latest update.

"With the high infection rate in the EU, public health urgently needs to provide vaccines to EU citizens as soon as possible. Despite this urgency, there is a consensus throughout the EU that high-quality standards should not be compromised, and that any recommendations should be based on the strength of scientific evidence on the safety, quality and effectiveness of vaccines, rather than anything else. "

"EMA has been in dialogue with the European Commission, as well as with other regulators across the network and internationally. Authorization is granted when the evidence convincingly shows that the benefits of vaccination outweigh any of the risks of vaccination. Full details of the scientific assessment are publicly available in the European public assessment report on the EMA website, "it added.

The criminal investigation into cyber attacks is still in progress before foreign media reporters release their articles. The attack was not attributed to a specific hacker organization or state actor, nor did it confirm who was trying to provide false information about the new coronavirus by seeding fake medical documents on the Internet.

According to researchers, hackers who hacked the DNC network in 2015-16 sneaked tampered data into leaked emails - an attack that was later blamed on Russia.