In the early hours of January 11 local time, Parler, a social media platform, went offline after Amazon shut down its web hosting service. In response, Parler filed a lawsuit against Amazon. Before that, Google and Apple had removed Parler from their app stores.The reason for these technology companies is that Parler is unable or unwilling to stop the platform from inciting violence. Amazon's move led to the direct closure of the Parler platform, which had to find new cloud service providers.

On January 8, it was shut down on twitter(Donald Trump) account, the number of new users of Parler soared. Since last NovemberUSA presidentgeneral electionSince then, the use of Parler has reached a new high, leading to a growing gap between the public's different attitudes towards reality. 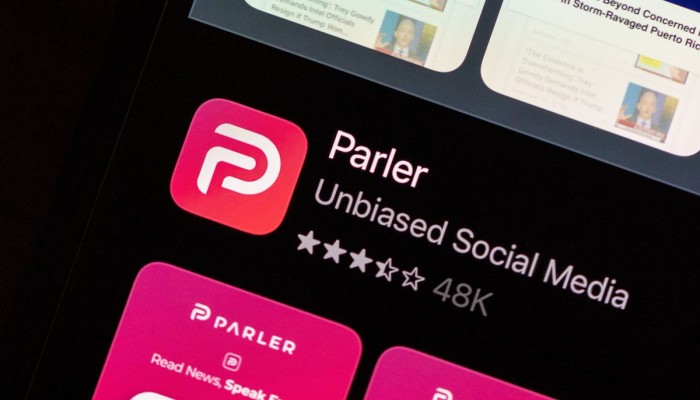 It's popular on the right

After the U.S. presidential election in 2020, Parler has become popular among right-wing politicians and influential people. These people have a large number of followers who can share and publicize their ideas on Parler without worrying that the platform will delete or mark their published content on the grounds of danger or misleading. Furthermore, Parler has become a "safe haven" for extreme right wingers and conspiracy theorists.

As youtube, Facebook and twitter, the three most well-known social media companies, have taken action to reduce the spread of extremism and false information, Parler has become more popular with right-wing users. Although it is dwarfed by Twitter's 330 million monthly active users, the popularity of the platform has exploded. In November last year, the number of registered users doubled to 10 million. When Parler closed, it claimed 12 million users.

Biden (Joe Biden) won the presidential election, and claims that Biden's campaign and the Democratic Party were illegal were misinformed. But on the Parler platform, the news spread was that trump won by an overwhelming majority, but the victory was "stolen.".

On the Parler platform, one reality that cannot be ignored is that extremist movements like qanon and boogalooers are growing because they are not regulated.

The origin of Parler

Founded in 2018, Parler was a niche social platform catering to right-wing users. Parler can accommodate users who violate the content rules of Facebook, twitter and Youtube. Until the beginning of 2020, the number of Parler users is still very small, less than 1 million in total.

When Parler was founded, there were already right-wing platforms such as gab. Compared to platforms such as gab, Parler is known for catering to mainstream conservatives. In 2020, when twitter began to label Trump's misleading messages about possible fraud in absentee voting and mailing votes, some prominent politicians saw Parler as the next bastion of conservative voice.

In the weeks before the US presidential election on November 3, large social media platforms took measures one after another to reduce extremism and false information related to the election. These measures continued until after the election, when mainstream conservative politicians and trump claimed that Biden and the Democratic Party cheated voters. As a result, millions of users migrate to platforms such as gab and mewe, and most of them go to Parler.

Users chose Parler because the platform promised "not to mark false information" and would not prevent the creation of extremist communities. Another reason is that Republican politicians and some well-known figures suggest that Parler will become a new base for conservatives to voice.

Parler has only two community rules: no intentional crime, no spam or robots. Due to the lack of regulation of bad speech, racism and anti Semitism are rampant in Parler.

Behind the scenes of Parler

Parler's ownership remains largely confidential. However, the information that has surfaced is worrying.

Parler's privacy policy is also extremely worrying. According to the platform policy, Parler has the right to collect a large amount of personal information. Compared with mainstream platforms, Parler users have much less control over the use of data.

Where is the future of Parler

If Parler can find a new network hosting service, its fate will depend on the actions of its users in the next few months. Can the company profit from the influx of new users? Or will its users slowly return to a larger platform? A major factor is Trump's own reaction and whether he will eventually create an account on Parler.

Parler caters to the right-wing audience and allows violent speech to spread on its platform. But extremism and violence on the Internet can lead to violence in the real world. Like gab, Parler is now dealing with the consequences of user violence.

Although it's hard to know if Parler will recover and grow in the future, extremism in its user base will continue for months. (Chen Chen)

Related news
Foreign media: conservatives who claim FB and twitter are censoring are flocking to Parler, who invested in Mercer
Apple and Google are under new pressure to remove Parler from shelves with violent threats
Parler is ready to go offline before Amazon's online service ban
Amazon has asked the court not to order the restoration of its hosting service to the social network Parler
Why did Parler become a gathering place of "Sichuan fans" when the number of users increased by 10 million in one year
The CEO of social app Parler said he was fired because he wanted to fight qanon and hate speech
U.S. social media app Parler announced it will enter the NFT space
Hot news this week
Female graduate students leave school to give birth to the hot debate is hype? The husband has set up a webcast company
How much is 4G than 5G! Huawei Mate50 network speed detailed measurement 6799 yuan to buy explosion money?
It's hard to find a machine! Huawei Mate50's first sales: oxen can not buy the price of 10,000 yuan to grab the price
Huawei City's proportion is the first! Survey: Northerners love to use folding screens more than southerners
Our global car he is a special car for China! Saic Volkswagen and FAW-Volkswagen are fighting each other
Chongqing Xiaomi Consumer Finance Co LTD has been fined 500,000 yuan for misappropriating consumer loan funds
Are they really aliens? The US Navy confirms there are multiple UFO videos: but they cannot be made public
The second phase of the main structure of Xiaomi intelligent factory is completed to see the delivery at the end of next year
In order to change the iPhone 14: Women's net red sells old phones and comes with a large number of private photos
4 million units are not enough! Huawei Mate 50 seconds sold out of the hack, the maximum price of 10,000 yuan to earn crazy
The most popular news this week
China's first pure electric convertible! Wuling Hongguang MINI EV Convertible Edition Listing: 99,900 yuan
Samsung applying for a dual -screen camera patent to support face recognition
There's a tidal wave of lying down, and ceos of big American companies are worried, saying, "Never seen anything like this."
Tesla sales response "disguised price reduction of 8000 yuan" : for the end of the quarter impulse, temporary activities
Apple iPhone 14 standard version is not good for sales, Lixun precision may face the risk of ordering orders
Billions of euros in investment, Intel Italy chip factory will be located in the Veneto region, sources said
China Mobile to develop 5G Tidal Smart Antenna: Where the crowd
Huawei Smart Screen New Products Tomorrow: Sub -looking 75 and 86 sizes of the sub -brand
Apple conscience: AppleCare+User iPhone can repair unlimited times
From January to July this year, my country's industrial software product revenue reached 121.9 billion yuan, an increase of 8.7% year-on-year