Intel: recall of CPU Dashen, mass production of 7Nm in 2023, outsourcing of some chips

As Intel's CEO changes from the old to the new, the chip giant is once again facing an important choice.

On January 21, US Eastern time, Intel released its financial report for the fourth quarter of fiscal year 2020 and the whole year of 2020. At least from the data, this is a financial report that surpasses Wall Street's expectation.

However, what the outside world really cares about is how Intel can help itself. 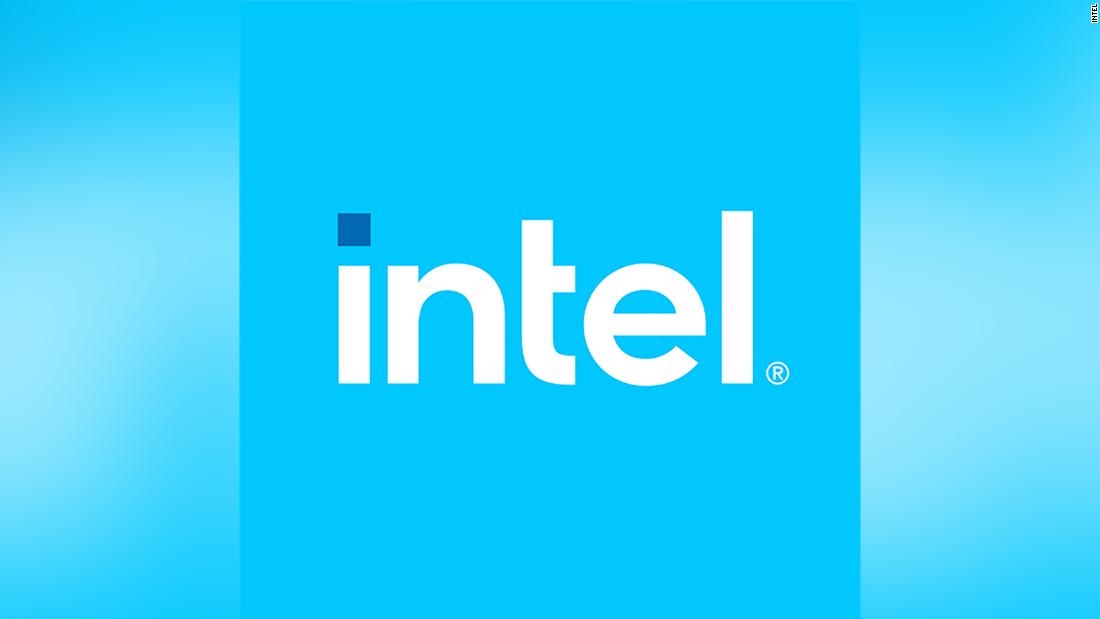 When Intel released its Q4 financial report in 2020, an Oolong event happened.

So, how does this financial report perform?

Let's look at the overall data

After adjustment, the net profit was US $6.2 billion, down 6% from US $6.7 billion in the same period of last year;

It is worth mentioning that in the above data, 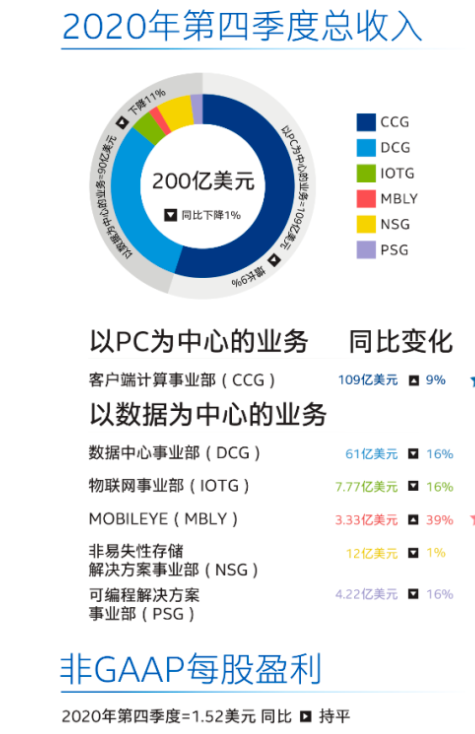 Let's look at the performance of each department.

In the PC business sector, CCG's revenue was US $10.9 billion, up 9% year on year. This trend is consistent with the 26.1% year-on-year growth rate of global PC shipments (IDC data), but not so good.It may be related to Apple's new product based on self-developed M1 chip.

Looking at the share price, Intel's share price rose more than 6% after the release of the final financial report,

It is no exaggeration to say that 7Nm process technology is now a major problem restricting Intel's stock price.

As a result, in July 2020, after Intel's Q2 financial report, Intel announced a negative news: due to the serious yield problem of 7Nm process, the company is 12 months behind in manufacturing; although the delay time can be halved to 6 months through more flexible chip design, the earliest mass production of 7Nm will be at the end of 2022 or early 2023.

In this financial report conference call, the more important issue is the 7Nm.

Pat Gelsinger, Intel CEO elect, talked about 7Nm related issues at the beginning of the meeting

Last week, I had the opportunity to personally review the progress of Intel 7Nm technology. Based on the initial review, I am pleased with the progress made by the 7Nm program in terms of business health and recovery. I believe that most of our products in 2023 will be produced in-house.

It is noteworthy that Bob swan, Intel's current CEO, revealed some news:

Another good news for Intel is that after pat Gelsinger announced that he was the CEO of Intel, Glenn Hinton, his old subordinate, chip magnate and Intel's retired God, announced that he would return to Intel. He once worked for Intel for 35 years and served as the chief architect of Nehalem CPU core.

This may be good news for the implementation of Intel 7Nm.

In fact, there is another issue concerning the attention of the outside world to Intel, that is, whether Intel chips will be outsourced.

After all,Intel has been dragged down by IDM in the past few years.

In contrast, after Intel's old rival amd chose to outsource chip manufacturing to TSMC, it successfully got on the ride of TSMC and made a great success on the 7Nm processor, and pushed the stock price up all the way.

AMD's share price has nearly tripled, at least in 2020.

Speaking at the opening of the earnings conference call, pat Gelsinger said, 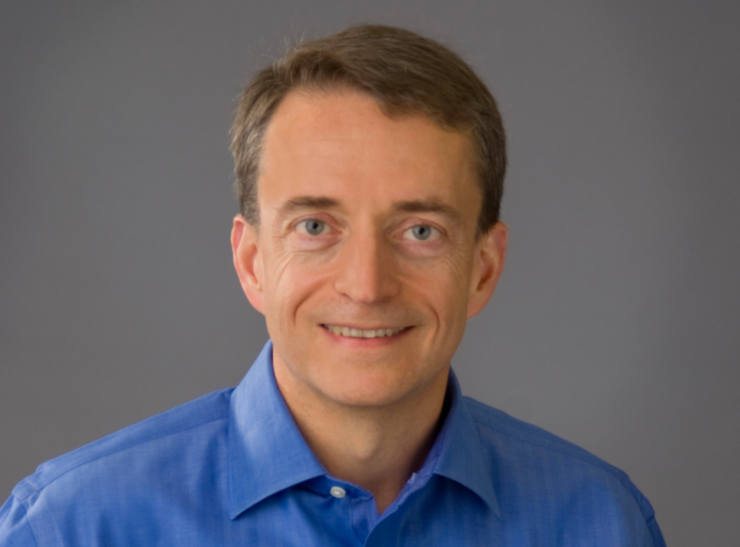 In a subsequent reading, pat Gelsinger added that,By 2023, most of Intel's products will adopt its own 7Nm technology, while some will adopt external OEM.

He also said Intel would play a leading role in using external OEM.

He also said that once the completed analysis and the best way forward are fully evaluated, Intel will provide more details about chip outsourcing and the 2023 product roadmap.

Thus, Intel has shown more openness in its technology path.

Therefore, from the current situation as a whole, Intel's attitude on chip outsourcing seems no longer ambiguous, but when to announce it is still unknown.

It should be noted that although the process problem is important, it is not the whole problem.

After all, as far as Intel chips are concerned, in addition to process technology, to achieve product leadership, we also need support in packaging technology, hybrid architecture (CPU to XPU), memory, security and software.

In any case, Intel's replacement of CEO is already a sign of its active pursuit of change.

As for whether pat Gelsinger can lead Intel out of the quagmire of process technology and stock price, it will take a while for the bullet to fly.

Related news
NVIDIA: has no intention of competing with Intel for the CPU market
Korean media: Samsung will OEM Intel 14nm processor
Amd "girlfriend" GF or take Intel order to OEM 14nm low-end CPU
Against amd 5nm Zen 4? Intel's 2022 mass production of 7Nm CPU processor
Amd has the best chance to compete with Intel, but it still needs to be patient in the server CPU Market
Intel: recall of CPU Dashen, mass production of 7Nm in 2023, outsourcing of some chips
Intel 14 Core CPU live "fruit photo" first announced: 7nm process is powerful
Samsung Stars Mass Producing 3nm Chips
Hot news this week
Sources say Penguin Random House's deal to buy Simon & Schuster has fallen through
Any chance of taking over the agency? Sources say Tencent has been in contact with Blizzard for at least a year
Blizzard's founder responded to NetEase's contract renewal: Cooperation is a two-way street, and we will do our best to make Blizzard games accessible to Chinese players
Ali suddenly released a new chip, the domestic chip breakthrough, abandoned the American chip fantasy
Better than Huawei or Apple? It is revealed that Samsung S23 uses satellite communication: can also space voice
Players recognized as the best of the year! The Old Man Ring won four awards at the 2022 Pension Rocker Awards
According to sources, TSMC replaced Samsung to win a large order of Tesla's assist driving FSD chip, based on the 4/5nm process
Today is the 18th anniversary of Blizzard's World of Warcraft: unfortunately, the national service will be discontinued in January
Jinshanyun reported revenue of 1.97 billion yuan in the third quarter, down 18.4 percent year on year
Xiaomi Q3 has not returned to the normal growth track. Wang Xiang: The idea of high-end strategic quick wins is incorrect
The most popular news this week
China AVS3 video, audio standards rise! 8K/4K/ mobile for the first time
AMD ripper is finally not lonely! Intel Fever U returns to 56 core hard carry 64 core
The price of Xiaomi 13 to 4,500 yuan has sparked heated debate among netizens: Should you buy Xiaomi at more than 4,000 yuan
Thunder online game accelerator announced that it will be officially suspended on December 1
With the NIL technology, Canon wants to provide China with a lithography machine comparable to the EUV
Wechat iOS version 8.0.31 private test update: Added the function of dragging pictures and videos to send with one key
AMD Zen4 12 core price record low! The cumulative price drop is 20%
Priceless metal is thrown away: One million scrap mobile phones can recycle 68 kilograms of gold
The world's first 6GHz! Intel's "Ashes Edition" arrives early: You're out of the sky
SONY loosen up! PlayStation's multi-year super exclusive is coming to PC