AMD's sharp dragon APU has achieved great success in notebook mobile terminal in recent years, which makes Intel quite embarrassed. However, it is very hard for DIY players who like APU, because the sharp dragon 4000g APU of the previous generation zen2 architecture has no retail at all, and has been limited to Si and OEM fields. The CPU-Z 1.95 version can identify the specific model, which is enough to prove that it should be the official version. It's really close, but the specific number has been coded, so it can only be seenIt belongs to the sharp dragon 7 Pro Series, which is obviously an OEM version for business and enterprise machines, and will not be sold in retail.

In terms of frequency, after testing,By default, the full core can run to about 4.05ghz, and it's not a big problem for the full core to exceed 4.75ghz. Moreover, the power consumption, temperature and control are excellent. Compared with the sharp dragon 7 5800x, it's cooler, and the heat accumulation problem is improved. 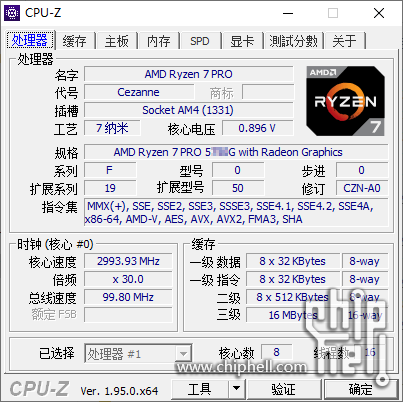