Google on Friday updated its YouTube app for IOS, the first in a series since Apple began requiring developers to disclose information about user privacy and data processing. According to Google's release notes, the latest version of YouTube includes bug fixes and performance improvements. According to Apple's request, the app store page of YouTube for IOS lists what data it will use to track users, and identifies information that may be collected and linked to the user's identity.

According to Apple's guidelines, privacy disclosure was added to YouTube's description in January, but the functionality and content aspects of the app itself have not been affected to this day. Apple's privacy program aims to provide users with greater insight into how their data is being used by developers. According to the rules, application manufacturers must disclose the data they or third parties collect and specify how to use it.

Similar to past app store policies, apps can stay in the store without publishing privacy labels, but the new rules must be enforced when updates are submitted. Some speculate that Google is avoiding privacy disclosure by delaying regular updates. The search giant refuted these claims in January when it announced plans to update its IOS app suite in a few weeks, but the timetable was clearly too optimistic. 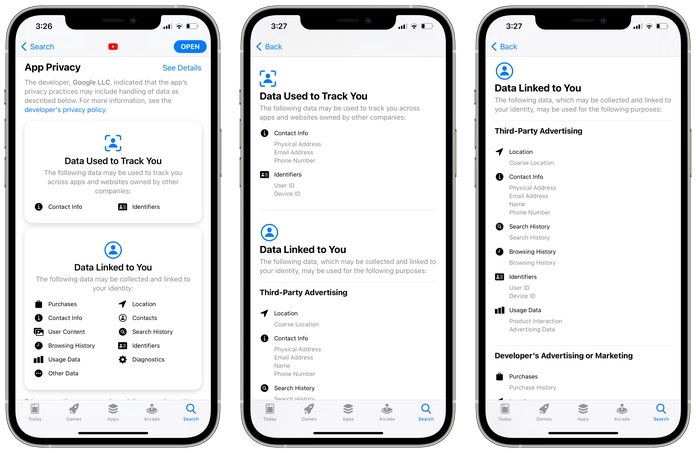 Earlier this week, the Gmail app began to warn users that the current version of IOS is out of date and does not include Google's latest security features. Then Google quickly updated the server and removed the warning.