Different from the red envelope competition of the domestic Spring Festival Gala, the advertising competition of the "super bowl" of the American Spring Festival Gala is mainly in creativity. Many people even come for advertising, and of course, there are midfield performances. In the past few years, technology companies have always attached importance to this opportunity. Advertising is not necessarily a commodity, but a way to publicize ideas and new technologies, or to be funny or affectionate. The purpose is to create a circle. In 2019, Microsoft will launch adaptive handle, and in 2020, Google will publicize Google assistant with a warm story.

This year, many big technology companies have dropped out of Super Bowl ads, and only Amazon is still promoting Alexa. At the same time, many new advertisers have joined the ranks. 5g, electric vehicles and personal investment have become the focus of the publicity of technology companies.

5g has been a hot topic of Super Bowl advertising in recent two years. T-Mobile is still in a funny style. It has designed two virtual scenes to "warn" people not to rely on the network when making major decisions. This is actually promoting the stability advantages of 5g network. 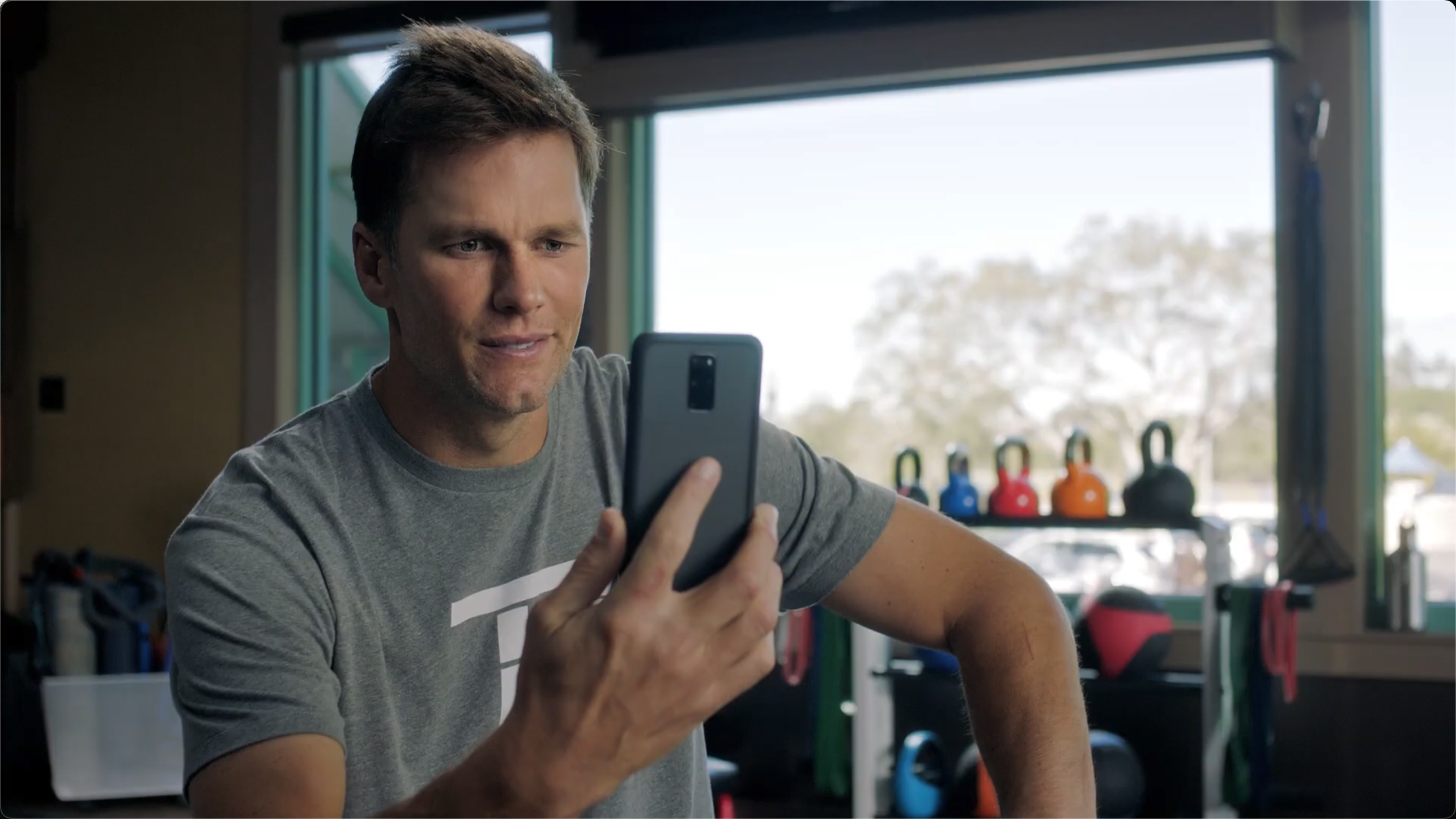 Cadillac invited "sweet tea" to reinterpret the classic movie "Edward Scissorhands". Born with a pair of scissors hands, he has received different eyes from others in many things, but he also has the dream of being a driver. So at the end of the ad, Edward won Cadillac's new electric car lyriq. Reddit bought a five second advertisement on the super bowl. The content is a simple post, which is said to have spent all their marketing expenses. Of course, it tells the story of the war between retail investors and short funds on the Wall Street bets forum some time ago

If you see this, it means our money is not wasted.

Super Bowl advertising space is very expensive, so we can't afford a complete advertising space. But we were really inspired, so we decided to spend all our marketing budget on the five seconds. One of the things we learned from the reddit community last week is that when a group of weak people come together around a common idea, they can do anything.

When people unite around what they really care about, great things happen. This place is called reddit. " 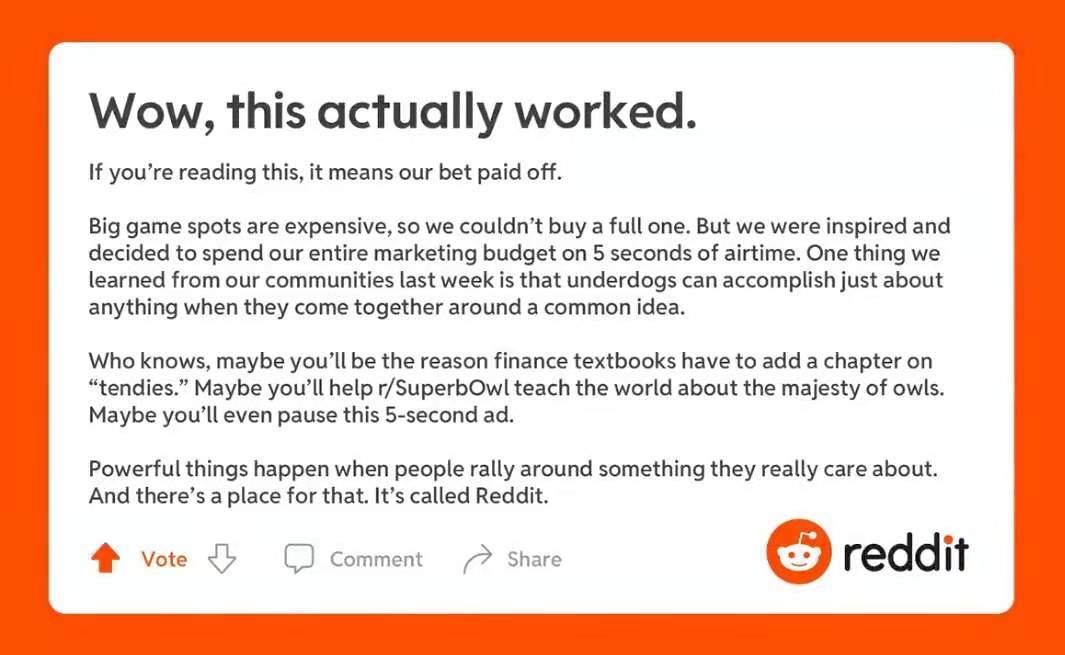 Robin hood also received a lot of attention in the Gamestop event. Like reddit, they both launched Super Bowl ads for the first time. The advertising content shows that people from different professions are investing in themselves, which is the advantage of Robin Hood, so that everyone can participate in the investment. Related news
Why can't Google and Amazon play games well?
Hot news this week
2021 Hurun self made list of the richest people under 40: 38 year old Zhang Yiming ranks first in China
Tencent Teana laboratory holds a cross boundary Seminar on artificial hearing technology: cochlear implant technology is undergoing cross boundary development
Dada's latest equity exposure: Jingdong is the major shareholder, and Kuai Jiaqi holds 7.8% of the shares
Shell equity exposure: Zuohui has 81% of the voting rights, and Tencent holds 5% of the shares of two shareholders, hillhood
For the first time in history! Sanxingdui "cornucopia" 3 pit successfully took out the complete round mouth square statue
Xiaomi donated to Tsinghua University to set up Xiaomi artificial intelligence Innovation Research Fund
Benchmarking Tesla semi? Geely responded to rumors of developing pure electric heavy truck: no comment
With over 17 million number carrying users and 99% success rate in one hour, is it the best time to handle it?
Spend another 20 billion dollars to buy nuance, where did Microsoft spend its ten-year "cash" capability?
Lenovo he Zhiqiang: the cumulative income exceeds US $500 million, Lenovo venture capital enters the payback period
The most popular news this week
Not ppt! Take alpha s, Huawei's autopilot, and deliver the Huawei version within this year
1 billion US dollars, over 5000 R & D personnel! Huawei Wang Jun: Huawei Bu has no revenue target this year
Why is "Huawei automobile" known as the first automatic driving? Top executives reveal secrets in person
China's box office will exceed 20 billion in 2021: 5 films will exceed 1 billion. How many have you seen?
The first battle of autopilot becomes famous! Huawei: auto R & D investment will reach 1 billion US dollars this year
The most powerful legal department is out! Nintendo suing switch host cracking team: claims nearly one million
After three times of sanctions, Huawei launched an all-round attack in nine directions
Mars willpower: who's blocking my Wi Fi!
April 19! NASA confirms the first flight time of the wit to Mars
Lenovo salvation blade desktop 2021 release: top 16999 yuan, lottery to buy