Tianwen-1 spacecraft completed the adjustment of the plane orbit of far fire point, 265 km away from Mars

According to CCTV, the reporter learned from the National Space Administration,At 17:00 on February 15, tianwen-1, China's first Mars exploration mission, successfully carried out plane maneuver to capture the far fire point in orbit.

Tianwen-1 successfully entered Mars orbit on February 10. Due to its high accuracy, the research team, after research and judgment, cancelled a Mars orbit correction originally planned for February 12 and directly adjusted the far fire plane orbit. 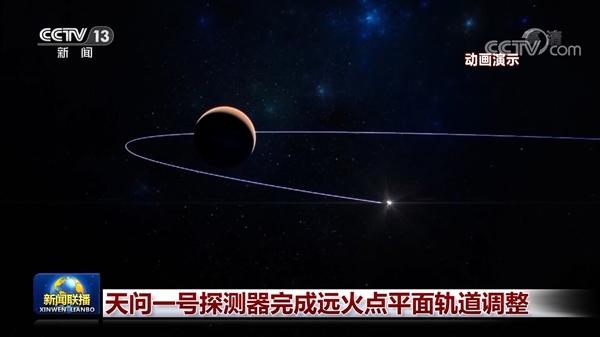 After tianwen-1 enters Mars orbit, its flight path is an ellipse around Mars, and the far fire point is the farthest point from Mars.

The plane orbit adjustment of far fire point is to change the flight route of tianwen-1 around Mars from horizontal to vertical, which is equivalent to turning 90 degrees in space.

In the process of adjusting the plane orbit of the far fire point on the 15th, the 3000 Niu engine on the tianwen-1 spacecraft ignited and adjusted its orbit to an annular fire orbit passing through the poles of Mars,And the height near the fire point was adjusted to about 265 km.

In the future, the probe will enter the Mars docking orbit through several orbit adjustments.

Since its successful launch on July 23, 2020, tianwen-1 has been flying for 202 days, completing one deep space maneuver and four midway corrections. When it arrived at Mars, its flight mileage was about 475 million kilometers, and its distance from the earth was about 192 million kilometers. The one-way delay of spacecraft ground communication was about 10.7 minutes, and all systems were in good condition.