According to foreign media reports,A team of astrobiologists at the center for applied space technology at the University of Bremen (zarm) has grown cyanobacteria under low pressure using only Martian materials, proving that future astronauts may be able to grow their own crops and other resources on the red planet.

When the first astronauts land on Mars, it won't be a short visit. In view of the current situation of space propulsion technology and the rules of celestial mechanics, the Mars mission means that it will take a very long time to wait until the earth and Mars are in the right position. This is a major obstacle, because carrying enough supplies to complete a task that may take more than two years will be very expensive.

As an alternative, mission planners at NASA and other space agencies are working on ways to live outside the earth. Specifically, they hope to find ways to grow food on Mars by using nitrogen and carbon dioxide in the Martian atmosphere or Martian soil to supplement the food brought from earth.

In the zarm study, a team led by Cyprien verseux studied Anabaena cyanobacteria, which can produce oxygen for the life support system and fix nitrogen in the atmosphere into sugars, amino acids and other nutrients to support the food cultivation of microorganisms or other crops. 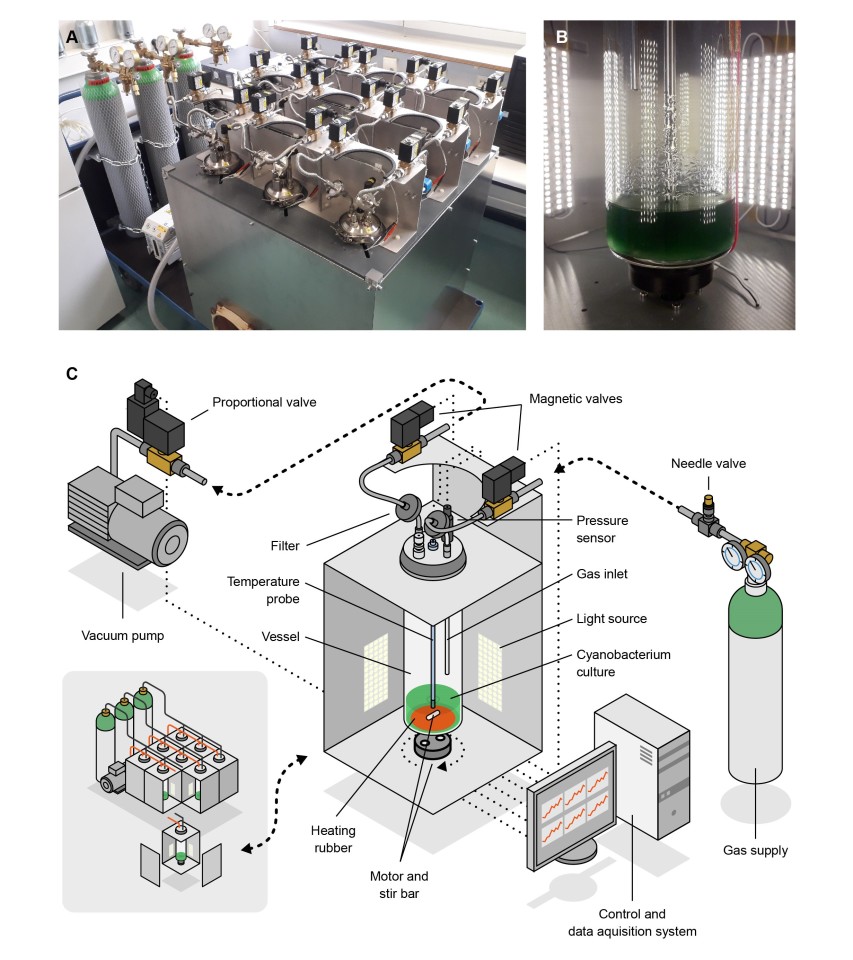 Unfortunately, Mars has a very thin atmosphere, almost one percent as dense as earth. Therefore, there is no liquid water on its surface, and there is not enough nitrogen in a certain volume of air to support the metabolism of cyanobacteria. The solution to this problem is to grow bacteria in pressure vessels, but these vessels can be heavy and complex.

To overcome this problem, the team built Mars combined with organic system atmosphere tester (atmos) bioreactor, which consists of nine one liter glass and steel containers. These containers are sterile, heated, pressure controlled and digitally monitored. In this case, cyanobacteria are introduced into a mixture of 4% carbon dioxide and 96% nitrogen, as well as artificial Martian chlorites containing nutrients such as phosphorus, sulfur and calcium.

Ingeniously, during the 10 day growth period, the container is pressurized to 10% of the earth's atmosphere instead of 1% on Mars. In the experiment, Mars Global simulated artificial mine was used as the growth medium, and the standard medium was used as the control.

As expected, bacteria grow better on standard media, but they also grow well on Martian soil, which means that useful bacteria may grow on Mars. However, there is still a lot to do.

"We hope from this proof of concept to a system that can be used effectively on Mars," verseuxays said. "Our bioreactor, atmos, is not the culture system we use on Mars: it's designed to test on earth the conditions we're going to provide there. But our results will help to guide the design of Mars cultivation system. For example, lower pressure means that we can develop lighter structures and easier freight transport, because it doesn't have to bear huge internal and external differences. "