Guan Guisen, chairman of China youzan, resigns from his post in connection with a criminal offence and returns 28 million yuan of illegal income 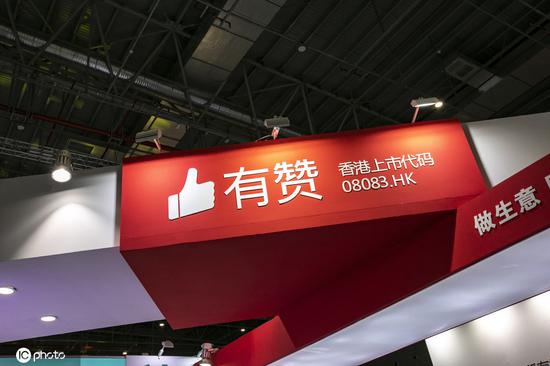 Original title: Guan Guisen, chairman of China youzan, resigned in connection with a criminal offence and voluntarily surrendered 28 million yuan of illegal income a year ago

Editor's note: according to the website of the Central Commission for Discipline Inspection and the State Supervision Commission, Guan Guisen fled on May 29, 2017 on suspicion of offering bribes to Wang Zhongmin, the former chairman of Zhongcheng Trust Co., Ltd., and obtaining 28 million yuan of illegal benefits from relevant projects.

On February 17, 2020, China youzan (HK: 08083) announced the resignation of the executive director. According to the announcement, Guan Guisen was removed from China as chairman and executive director of the wholly-owned company of Guan Guisen for being suspected of being related to a criminal offence. 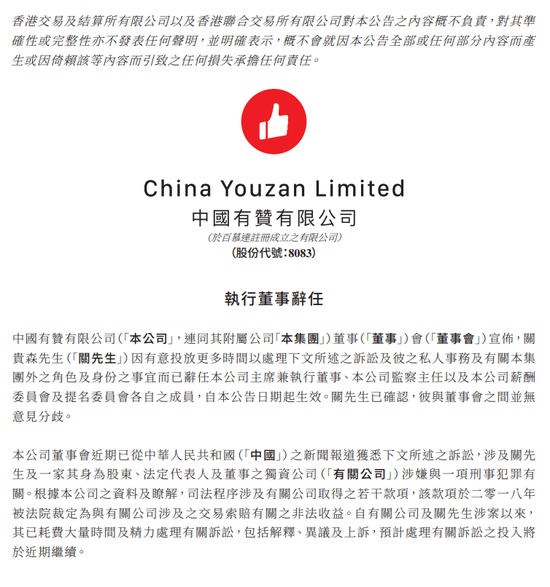 According to the announcement, the lawsuit involves Guan Guisen and a wholly-owned company of which he is a shareholder, legal representative and director, and is suspected to be related to a criminal offence. And the judicial process involves certain amounts of money obtained by the relevant company, which was determined by the court in 2018 as illegal proceeds related to the claims of the relevant company involved in the transaction.

The announcement said that the relevant situation and transaction took place more than 10 years ago and in Kwan Kwan Kwan in February 2011 Before joining youzan in June; the matters involved in the judicial proceedings and the relevant company have nothing to do with China youzan or its activities, business or personnel; no other employee of the group is involved in the case or leads to any inquiry or investigation of the case; Guan Guisen and the case are purely in his personal capacity, not related to any activities or business of the group or the group.

According to the website of the Central Commission for Discipline Inspection and the State Supervision Commission, Guan Guisen (male, born in September 1963) is the legal representative and chairman of Beijing Dongsen Jinbi Investment Consulting Co., Ltd. he was suspected of offering bribes to Wang Zhongmin, the former chairman of Zhongcheng Trust Co., Ltd., and obtained 2800 yuan from relevant projects He also helped Wang Shaohua, the former general manager of zhongchengxin trust, cover up and conceal the proceeds of crime and fled on May 29, 2017. 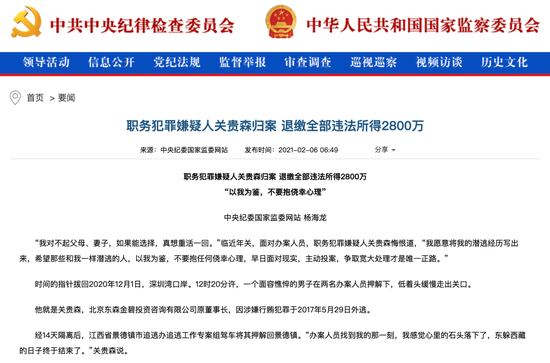 On June 6, 2017, the people's Procuratorate of Funan District of Jingdezhen City filed a case for investigation. On the Mid Autumn Festival in 2019, when Guan Guisen talked with his family on the phone, he was sad to learn that his parents were not in good health. His father told him that the relevant staff had repeatedly preached the policy, and had been trying to save him, and advised him to come to an end as soon as possible. On October 21, 2019, Guan Guisen will return all the illegal income of 28 million yuan. Just after the Spring Festival in 2020, Guan Guisen promised the special task force that he would come back to surrender when the epidemic situation improved. On December 1, 2020, Guan Guisen entered Shenzhen Bay customs and voluntarily surrendered.

Youzanzeng shares fell 5.33% after the announcement of backdoor listing

According to the financial report of China youzan in the third quarter at the end of 2020, Guan Guisen holds 2.39% of the equity of China youzan and Zhu Ning holds 11.04%. It is reported that Zhu Ning is currently the actual controller and CEO of China youzan.

Related news
Talk to Lenovo executives about the possibility of Lenovo exiting China?
Semicon China: Huawei and Exxon bring semiconductor intelligent quality inspection and measurement solutions
I URGENTLY NEED MY EX BACK WITH THE HELP OF A SPELL CASTER
How can i get rid of Herpes outbreaks and symptoms (+2348163
JOIN ILLUMINATI HOME OF RICHES,FAME AND POWER FROM ANY COUNT
Guan Guisen, chairman of China youzan, resigns from his post in connection with a criminal offence and returns 28 million yuan of illegal income
Def con China restarts Baidu security to hold the world's first all VR geek conference with def con
Hot news this week
With over 17 million number carrying users and 99% success rate in one hour, is it the best time to handle it?
Users complain that Microsoft win10 update has big problems: unable to install, performance retrogression, system crash
Xiaopeng auto executives: are considering the development of automatic driving chip to maintain a competitive advantage
Micro envelope banned vibrato link was prosecuted by users: Tencent tiktok to Shenzhen intermediate court
Linux foundation establishes research department to expand insight into open source projects and ecosystems
The first day of Tucson's future IPO in the United States: it fell nearly 20% in the session and ended flat
The former executive was sentenced to 12 million compensation after hopping Tencent from iFLYTEK: the party has appealed
Station B: network video users will break through 1.2 billion video platform and become a new portal of Internet
Qualcomm qcc5141 helps create a top wireless listening experience with the new cleer ally plus II true wireless noise reduction headset
The news said that Apple solved the new iPad Pro supply: the domestic synchronous launch, the strongest in history
The most popular news this week
What's the situation of domestic autopilot? I compared Huawei Dajiang, Tesla, Baidu and other companies
Huawei will launch three folding screen phones in the second half of the year
Sony picturesque series 4K OLED smart TV a90j evaluation
Xiaomi brand new appearance design patent exposure! Fuselage no entity button: Lightning rear camera eye catching
"My world" mosaic into a realistic blockbuster, NVIDIA and black Technology
Is the neck of China's industrial Internet stuck?
Standing on the roof of Tesla, he was arrested for 5 days! Family members of female car owners: keep fighting
Tesla auto show rights owners apologise: shouting Tesla will not compromise
Charge once, cool for one year: Youku gold membership card 50% off, only 99 yuan
U.S. officials issued a search warrant to Tesla to obtain the accident data! Musk's response