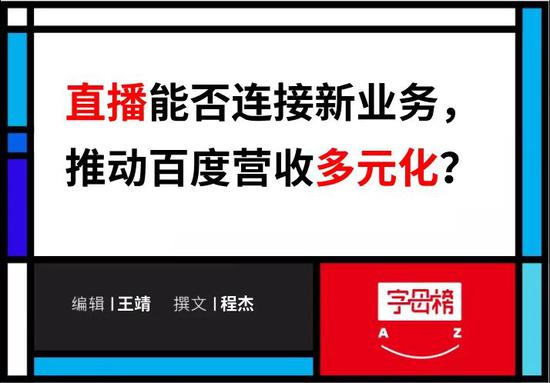 On the evening of February 8, huanju announced that the sale of its YY live business to Baidu company had been basically completed. Since the formal establishment of the short video business department last year, the acquisition of YY has been completed, marking the completion of Baidu's content ecology in the field of short video and live broadcasting.

Baidu's pace echoes the rhythm of wechat. Traditional traffic giants are gradually recovering their lost land and expanding the scope of competition to the whole range of content to consumption. In the long run, Baidu and wechat are expanding the platform's service experience for users and business value for customers through short video and live broadcast, which also provides a new starting point for Baidu's diversified cash flow path.

On the other hand, in 2020, the Internet advertising market will be further polarized, with obvious growth in link trading or e-commerce short video and social advertising with social attributes, which will seize the market share of other media. 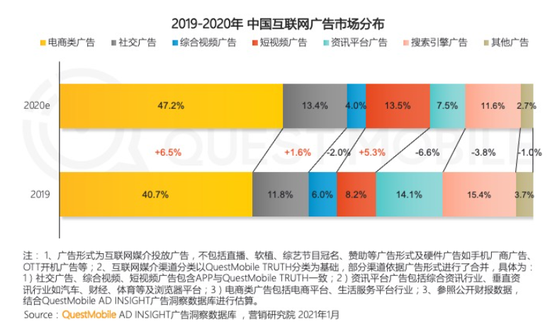 In general, in the past year, domestic Internet advertising has been more and more combined with content, e-commerce, payment and other forms, and diversified realization has become a definite trend of the industry in the next period of time.

This is also the important background of Baidu's business restructuring of mobile ecology, promotion of short video business, acquisition of YY and acceleration of live broadcasting business in the past two years. Robin Li made it clear that Baidu will give full play to its huge Internet user base and provide more non advertising services.

For head Internet companies like Baidu, business transformation and diversified cash flow are a common trend, and live broadcast will become the focus.

Live broadcast is not only changing the mode of information dissemination as an element of media reconstruction, but also becoming a container of connecting content, social and commercial as a commercial infrastructure.

Baidu and wechat are also rapidly complementing the live broadcasting business. The two giants will complete the preliminary maturity of short video (Live Broadcasting) products in 2020, and will inevitably take more actions in 2021, which will lead to further changes in the industry pattern.

The acquisition of YY has become an important measure to accelerate the maturity of Baidu live broadcasting.

For YY, with the weakening of the status of independent live broadcasting platform, there is also the problem of business growth being squeezed. These problems are solved with Baidu's blessing.

The value that Baidu can give YY is directly reflected in the flow. In the long run, the breakthrough lies in business integration. For example, the two sides can also form collaboration in short video and other content services.

YY live overall will remain independent operation, YY client will remain, and its content, technology and live team will be provided to Baidu at the same time. As an independent and mature social entertainment company, YY's supplement to Baidu's content ecology should complement Baidu's internal business innovation.

This action makes the outside world pay more attention to the extent to which the YY catalyzed Baidu live broadcast can connect with Baidu's new business and promote the diversification of Baidu's revenue.

The answer is obvious. For example, as an important support tool for Baidu's content creation, duxiaodian's form and function are similar to the role of wechat store in video number. It needs to be grafted into Baidu's live broadcast business, so as to further promote the development of Baidu's e-commerce. Another example is the combination of live broadcasting with knowledge content and service, which can provide more timely and interactive feedback service-oriented live broadcasting.

In the financial report conference call, according to Baidu, compared with the previous quarter, the average daily broadcast volume of Baidu Health Video increased by 92%, and the live broadcast hosted by health professionals increased by 163% on the next day.

For Baidu mobile ecology, the role of live broadcasting as a channel will continue to be reflected in connecting b-end services and C-end users' needs, and completing the flow cycle.

In the past few years, there have been three major changes in the mobile live broadcasting industry, behind which are the changes of the whole mobile traffic ecology.

As mobile live broadcasting platforms are eliminated one after another, there are only a few survivors in the market.

The short video platform tries to promote the transformation of video bloggers to anchorperson through the similar product form of video and live broadcasting.

We mentioned in Baidu's quick Kwai Tai competition: in the short term, the stronger traffic giant will make progress in the live broadcast business. 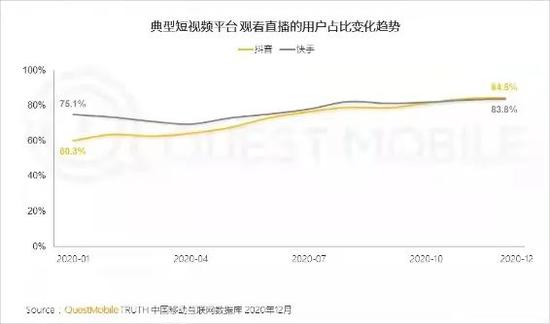 We can imagine how much Taobao live has stimulated the live broadcasting industry. On the one hand, Taobao has found a more beautiful data growth index. On the other hand, live broadcasting with goods has also brought new opportunities to the pan content platform, and the traffic has rapidly exceeded that of graphics and short video with goods.

The short video war is not over. The pan live broadcasting industry, which is a fast shaking duopoly, is facing changes. Baidu and wechat, two traffic giants, may be better at connecting content, people and services.

In addition, in the Baidu domain, YY and its enhanced Baidu live broadcasting can be more integrated with global content creation, electricity supplier realisation, and service support. This is also what Robin Li has said, and after YY is deeply integrated with Baidu, the development opportunities of Baidu in the Baidu ecosystem are greater.

In terms of business model, Baidu's mobile ecology is constantly developing in depth, focusing on core vertical categories such as e-commerce and health. Live broadcast is not only a new engine for Baidu's business growth, but also an important starting point for diversification.

The changes in the live broadcast industry reflect the continuous changes in the mobile traffic ecology. As we said in Baidu mobile ecology is flattening, content, social interaction and consumption are becoming a whole.

In this process, the realization forms of commercial companies are also merging. In the past year, each Internet company's increasing weight on live broadcasting business is also reflected in the diversified development. 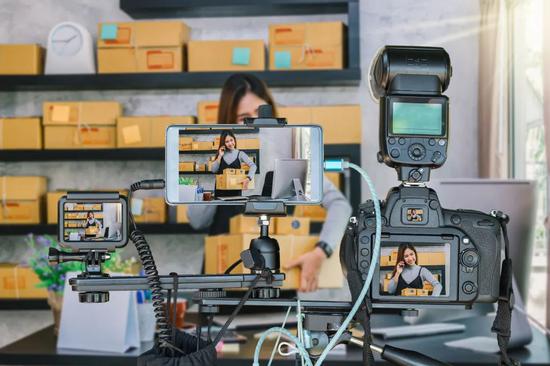 For another example, we mentioned earlier that Baidu hosting page has reshaped the commercial value of Baidu marketing services to customers, and the traditional computational advertising will gradually decline. To help businesses carry out commercial activities and obtain sales growth is the direction of improvement for today's digital advertisers.

For example, an enterprise or brand live broadcast in Taobao, Baidu and wechat can often achieve multiple effects, such as product promotion, customer management and delivery, which are reflected in the performance of the commercial platform and can comprehensively drive the growth of advertising marketing, value-added services, e-commerce and other revenue.

The development of Baidu live broadcasting is expected to be the same. The focus is not the challenge to the existing pattern, but the significance of live broadcasting to Baidu's internal commercialization integration, such as promoting the commercialization cycle of Baidu's internal traffic, improving the user's experience in content consumption and service, strengthening the user relationship, and boosting the development of Baidu's new businesses such as payment and e-commerce.

For example, in Baidu app, the user account system is further opened up, and the content habits, social relations, and consumption scenes of users are more precipitated in Baidu. The cash flow method of creators will also be composed of sharing, advertising, payment, and e-commerce. 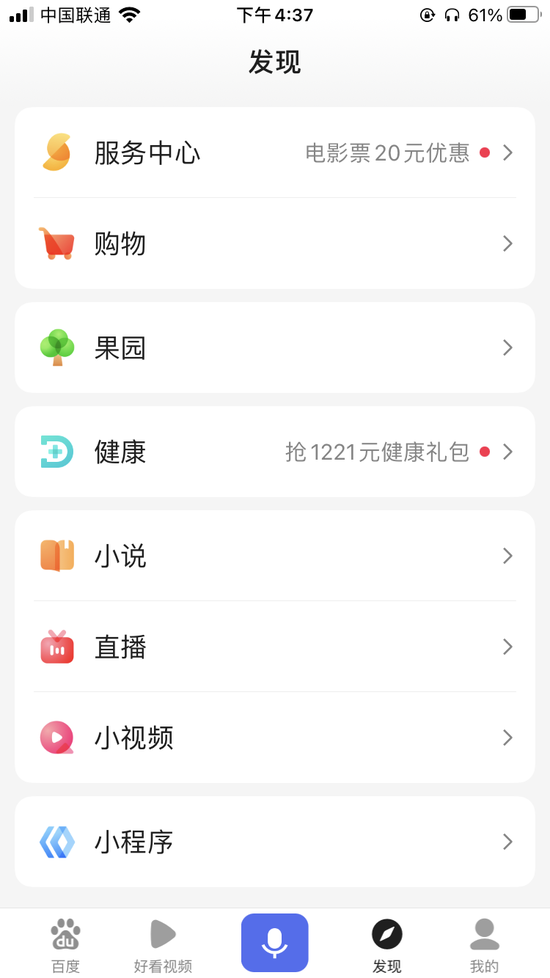 The completion of the acquisition of YY means that Baidu's live broadcasting business will have a faster pace of development, and there will be more embodiment in business integration

Live broadcast is the most efficient and relatively mature content form of content traffic commercialization, which can effectively improve Baidu's revenue in paid value-added services;

At the same time, with live broadcast as the starting point, Baidu can conduct more in-depth service integration of Baidu user system, and improve the accessibility and accuracy of content and service;

With the entry of the last wave of traffic giants, the competition will spread to more fields.

Related news
YY "sell oneself", baidu picks up double-edged sword
It is said that Baidu bought YY in addition to live broadcast, but also bought a cash cow
YY for Baidu, the right is perfect
Why can't Baidu buy YY?
Baidu's $3.6 billion acquisition of YY live, planned to be completed in the first half of 2021
Robin Li's 52 birthday, Baidu bought YY live broadcast, $3 billion 600 million value is not worth.
Muddy water claims that 90% of YY's live broadcasting is fake, and it has just been sold to baidu this week
Baidu has already entrusted PricewaterhouseCoopers and other parties to complete YY due diligence transaction, and there are many possibilities
Baidu acquires YY: the third live broadcast war starts
Baidu vice president Cao Xiaodong officially took over YY. Is $3.6 billion worth it?
Hot news this week
Is Hongmeng OS Android shell? HUAWEI Wang Chenglu: Tucao people do not make complaints about what is open source.
Netizens said that the ps5 host has been cracked: it is able to mine and calculate the power of super high-end graphics card
Tencent publishes the title party recognition patent for the first time: Based on Artificial Intelligence
I'm hiking in the tropical rain forest of China with apple watch, but my sports record is the last thing I care about
Xiaomi's new patent exposure: four shots are distributed in the four corners of the mobile phone, which can realize 3D photography
The internal test of flyme 9 of Meizu 16 series was launched at the end of April: design, privacy and function upgrade
Ma Yun bought the invention of scanning code to pay several 80s will ring the bell: an estimated value of 54 billion
Three years in vain! Sun, a programmer, compensated Tencent 976000 yuan and returned 158000 yuan for violating the competition agreement
Tencent document online mind map and flow chart, using structured thinking to achieve information management
This year's first big West Mercury show will be held on the 6th! Feel the true face of the smallest planet in the solar system
The most popular news this week
Huawei's cheapest real wireless noise reduction headset freebuses 4I first sale today: 449 yuan
The report said that Russian intelligence forged news websites to spread the wrong information about the new vaccine
From March 1, will wechat start charging for good morning and good morning pictures? Official response
Do you charge for sending such pictures on wechat? Here comes the official response
150 people have been cut in two years! Google understands how much it costs to play games
Huawei's P50 release time is suspended at the end of April: new tablet comes on stage simultaneously
Linux kernel 5.11.4 release adds support for some mainstream hardware
Samsung releases 2021 49 inch G9 super curved display: upgrade Mini LED screen, double brightness to 2000 nits
Sony drift to PC?
The U.S. Department of labor's investigation concluded that Microsoft had no misconduct in the anti affirmative action in the trump era