Hawking bet to lose the black hole again accurate measurement! The rotation speed is close to the speed of light 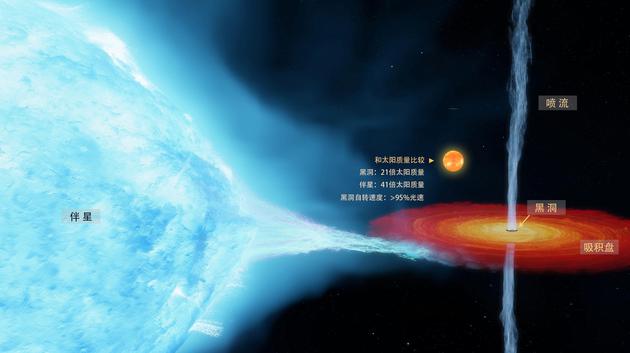 Three teams from Australia, the United States and China (led by researcher Gou Lijun of the National Observatory of the Chinese Academy of Sciences) independently measured and limited the distance, mass, spin and evolution of the black hole. They found that the system contained a black hole with 21 times the mass of the sun, and its rotation speed was very close to the speed of light. This is the only X-ray binary system with a black hole mass more than 20 times the mass of the sun and rotating so fast. Among them, Zhao Xueshan and Zheng Xueying, researchers and students of Gou Lijun at the National Astronomical Observatory of the Chinese Academy of Sciences, are the co authors of the papers published in the Journal of science. As the first author and corresponding author, they published a series of papers on the accurate measurement of the rotation of black holes in the Journal of astrophysics.

Cygnus X1 is an X-ray binary system, which contains not only compact stars that can produce X-ray sources, but also a blue giant. Since this system was first discovered by American sounding rocket in 1964, the question of whether the compact object is a black hole or a neutron star has been a hot topic in the field of high energy astrophysics. In the 1970s, physicists Thorne and Hawking also made a bet on it, and they also made a case. It was not until the 1990s, when more and more observational evidence showed that the center of the system should be a black hole, that Hawking signed to admit defeat.

Although Hawking has given up, there has been a lack of accurate measurement of the nature of the system. In 2011, researcher Gou Lijun and his collaborators made the first attempt to accurately measure the nature of the black hole. The result is: the distance between the black hole system and the earth is 6067 light years, the mass is 14.8 times the mass of the sun, and it is found that the visual interface of the black hole is rotating at 72% of the speed of light.

In 2013, the European aviation agency's Gaia satellite was launched, planning to accurately measure the distance of 1 billion stars in the galaxy, including X-ray binaries such as Cygnus x1. As a result, Gaia's distance of Cygnus X1 is a little further than before, about 7100 light-years. In the article just published in science, the team led by Professor Miller Jones from Curtin University in Australia, using the very long baseline interferometric array (VLBA) of the United States, measured and confirmed the distance of Cygnus X1 again by using the trigonometric parallax method. After combining the new observation data with the previous observation data, and eliminating the systematic error effect caused by the jet motion of Cygnus x1, the team finally obtained the latest distance of Cygnus x1 Black hole, which is 7240 light-years, with an accuracy of 8%, which is completely consistent with the distance given by Gaia satellite. On this basis, the team reanalyzed the optical data and found that the mass of the black hole increased by 50% to 21 times the mass of the sun, with an accuracy of 10%. This is the only black hole X-ray binary star system with a mass of more than 20 times the mass of the sun.

The rotation of the black hole only affects the range of a few hundred kilometers near the black hole's visual interface, so we need to use the X-ray data with higher photon energy produced by the accretion disk in this region to infer. The research team led by researcher Gou Lijun analyzed the X-ray spectrum data based on the newly obtained distance and mass measurement results, so as to accurately limit the rotation speed of the black hole. Compared with the previous measurement results, it was found that the rotation of the black hole in this measurement is more extreme, and the black hole visual interface is rotating at least 95% of the speed of light, which is the only one so far known Black hole system with high speed rotation. The detailed analysis process is published in the Journal of astrophysics online today. At the same time, this summary result about spin is also described in the article of science online today.

The complete and high-precision measurement of system parameters enables the team to make a more stringent restriction on the evolution process of the system. Professor Mandel of Monash University in Australia, a co-author of science, led another paper on stellar evolution published in Acta astrophysics. This paper shows that to form a black hole with such weight and extremely fast rotation, the stellar wind loss should be several times smaller than previously expected, and the predecessor of the black hole weighs 60 times the mass of the sun.