One wave is not even, another wave rises again! Just after the domestic "academic fraud, misuse of pictures" and other events, the academic circle staged a farce of "academic touch porcelain". Recently, retraction watch, a well-known academic anti-counterfeiting website, published a topic article pointing directly at the academic fraud of Chinese scholars. The article points out that Chinese scholars are suspected of publishing academic papers under the name of David Cox, a former Harvard associate professor and director of MIT IBM Watson AI laboratory. David Cox has publicly confirmed the incident and tweeted that "the whole incident is disgusting.".

At the same time, the article also emphasizes that what makes people feel more absurd is that the person involved faked a non-existent MIT professor in the signature of the paper.

After the exposure of this incident, many netizens joked that it was "name misuse"? It's amazing!

It is understood that at present, the relevant platform has withdrawn all the papers involved.

According to Cox, he has the habit of browsing journal websites from time to time. Recently, when he searched for papers on DBLP (a paper website in the field of Computer Science), he found himself among the co authors of the two papers. He had never participated in the project and did not know other co authors.

There may be a double name. At first, Cox didn't care too much. But when he opened the paper PDF, he found that his personal photo appeared in the author's details page, and his email address was exactly the same as his.

After confirming that the other party did use his own identity, Cox became angry. He contacted the publisher for the first time, complained, and posted several tweets on the social platform accusing him of his behavior.

It is understood that David Cox is quite famous in AI circle.

At the same time, his online course on "Fundamentals of neuroscience" has attracted more than 750000 students from all over the world; the AI Lab he leads has brought out a number of well-known academic experts and enterprise founders, who are involved in many industries such as health care, automatic driving, etc. In addition, his MIT IBM Watson Joint Research Center for artificial intelligence was established in 2017, with a cost of 240 million US dollars (about 1.55 billion yuan), which is one of the largest long-term cooperation projects between universities and enterprises so far.

The laboratory has gathered many excellent researchers from IBM and MIT. As the director of the laboratory, David Cox leads them to work together on the basic research of artificial intelligence to solve the problems that are difficult to overcome in the frontier field of AI.

David Cox was not the only one who was recruited. In a subsequent investigation, it was found that the personal information of Sam amarasinghe, a professor of MIT, was falsely used in another article published by the person concerned.

Saman Amarasinghe is Professor of electrical engineering and computer science department (EECS) of MIT, chief researcher of computer science and Artificial Intelligence Laboratory (CSAIL), specializing in language design and complex compilation technology. He led the team to develop specific languages and compilers such as halide, taco, simit, streamit, streamjit, petabricks, milk, CIMPLE and graphite. He is a leader of high-performance specific languages A global leader in the world.

In a paper entitled "Notice of retraction: intelligent transportation system in Macao Based on deep self coding learning" published by the parties concerned, amarasinghe's personal photos and information appeared among the co authors, but the name of the professor was changed to bill Franks. 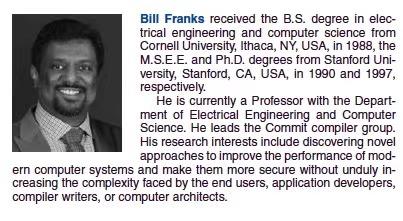 Amarasinghe has so far not commented on the incident.

At that time, this paper was published in IEEE Transactions in industrial information magazine, and IEEE magazine immediately cancelled it after the incident was exposed. Monika Stickel, head of the platform, said, "our investigation found evidence of IEEE policy violations, and the article has been withdrawn in accordance with our specifications."

However, to Cox's indignation, it was only after threatening to resort to legal means that the other party agreed to withdraw the fake papers related to it.

The paper is withdrawn and the person involved is expelled

Springer Nature magazine dealt with Cox's complaint immediately after receiving it, and claimed that it would withdraw the manuscript. But on January 28, Cox tweeted that Springer nature just wanted to correct the paper, not withdraw it. After Cox considered protecting his own rights and interests through law, the other party clearly issued a withdrawal statement the next day.

Springer nature explained two points about the whole story and why Cox was included as a co-author. One is that the person concerned drew inspiration from Cox's "good idea"; the other is that during the paper review, the platform received an identity confirmation email from Cox, but the email address did not have his official number.

Cox didn't buy this explanation. He said that his research direction was not related to the above papers, and he didn't talk about related topics publicly. Their purpose may be to increase publishing opportunities, or to gain academic reputation and financial rewards.

It should be noted that at present, all relevant papers have been deleted, and those involved have also been expelled. "No one will work with him any more, and he will not be involved in publishing any more academic papers," Springer nature said

Cox said that for whatever reason, the incident highlighted the weakness of academic publishing regulation, reflecting the general lack of publication standards in AI and computer science, which led to many papers being published online without strict review.

Frequent academic misconduct, how to bring order out of chaos

As a matter of fact, not only is the signature of the paper confused, but also the misconduct of plagiarism and falsification of the paper has always existed in the academic circles. According to retraction watch, more than 1000 papers were withdrawn due to academic misconduct between 2012 and 2015.

In recent years, related misconduct seems to have intensified. Recently, both at home and abroad, academic misconduct of well-known scholars has been frequently exposed. So how to deal with this imagination?

For academic publishing business, the most effective way is to standardize and audit papers more strictly through the new rules. As Suzanne Farley, director of research integrity at Springer nature, said, "the fundamental challenge we face is that for decades, publication has been based on trust, but unfortunately, some individuals and groups intend to cheat and abuse that trust."

What's more, there is no strict standard in auditing. The reason for this incident is that the person involved did not use the author's official e-mail address to send identity confirmation information, but passed the platform audit.

Therefore, any trust needs certain norms as the basis. At the same time, it is the responsibility of every scholar to maintain the fairness and justice of the academic community, and it benefits everyone ultimately.

Finally, to borrow Cox's words: "if you don't want to undermine the public's trust in peer review, this kind of event really shouldn't happen again."

Related news
NASA Mars 2020 "Name the Rover" essay contest has kicked off
Papers from Harvard Medical School defame China, forwarded by trump, replied by the Ministry of foreign affairs, and Baidu also made a voice
Tsinghua University ranks first in China and second in Asia
The English name of Chinese liquor has been changed: Chinese Baijiu has been officially launched
Former Harvard professor bombards Chinese scholars: academic "touch porcelain"! Response: the person concerned has been dismissed
Name misuse? Chinese scholar's "academic touch porcelain" is bombarded by former Harvard professor
Hot news this week
Is Hongmeng OS Android shell? HUAWEI Wang Chenglu: Tucao people do not make complaints about what is open source.
Netizens said that the ps5 host has been cracked: it is able to mine and calculate the power of super high-end graphics card
Tencent publishes the title party recognition patent for the first time: Based on Artificial Intelligence
I'm hiking in the tropical rain forest of China with apple watch, but my sports record is the last thing I care about
Xiaomi's new patent exposure: four shots are distributed in the four corners of the mobile phone, which can realize 3D photography
The internal test of flyme 9 of Meizu 16 series was launched at the end of April: design, privacy and function upgrade
Ma Yun bought the invention of scanning code to pay several 80s will ring the bell: an estimated value of 54 billion
Three years in vain! Sun, a programmer, compensated Tencent 976000 yuan and returned 158000 yuan for violating the competition agreement
Tencent document online mind map and flow chart, using structured thinking to achieve information management
This year's first big West Mercury show will be held on the 6th! Feel the true face of the smallest planet in the solar system
The most popular news this week
Samsung has registered "Galaxy Z" trademark
Huawei's cheapest real wireless noise reduction headset freebuses 4I first sale today: 449 yuan
The report said that Russian intelligence forged news websites to spread the wrong information about the new vaccine
From March 1, will wechat start charging for good morning and good morning pictures? Official response
Do you charge for sending such pictures on wechat? Here comes the official response
150 people have been cut in two years! Google understands how much it costs to play games
Huawei's P50 release time is suspended at the end of April: new tablet comes on stage simultaneously
Linux kernel 5.11.4 release adds support for some mainstream hardware
Samsung releases 2021 49 inch G9 super curved display: upgrade Mini LED screen, double brightness to 2000 nits
Sony drift to PC?