Boeing plane has two engine air explosions in one day. Listen to experts?

On the 20th local time,A Boeing 777-200 airliner of United Airlines had an engine explosion shortly after taking off from Denver International Airport, Colorado. Fortunately, the emergency landing was successful, and no casualties were found on board.On the same day, a Boeing 747-400 freighter took off from Maastricht, the Netherlands, and its engine exploded. Debris fell from the air, injuring two people on the ground.

According to the FAA, the airliner was carrying 231 passengers and 10 crew members and was planning to fly to Honolulu, the capital of Hawaii. Shortly after taking off, the engine on the right side of the plane exploded and caught fire.

A video taken by passengers on board shows that the metal shell of the engine has been peeled off and flames can be seen coming out.

Witnesses on the ground saw that the plane was flying at an abnormally low altitude. Smoke was generated on the plane, and explosions were heard. At the same time, pieces of the plane fell from the air like snowflakes. 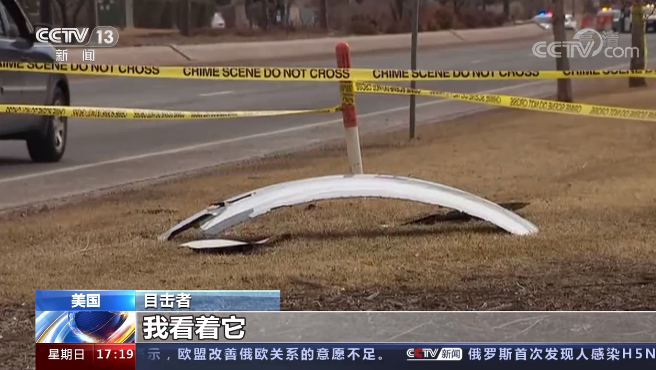 According to reports, debris from the plane's engine explosion fell in the community near Denver International Airport. Local police said that some large pieces of debris were found in the suburb 40 km north of Denver City, and some even fell in front of residents' houses. Fortunately, no casualties were caused. At present, the U.S. aviation safety departments are investigating the accident. The local police reminded the public not to touch or move the debris if it is found, so that the relevant departments can investigate. 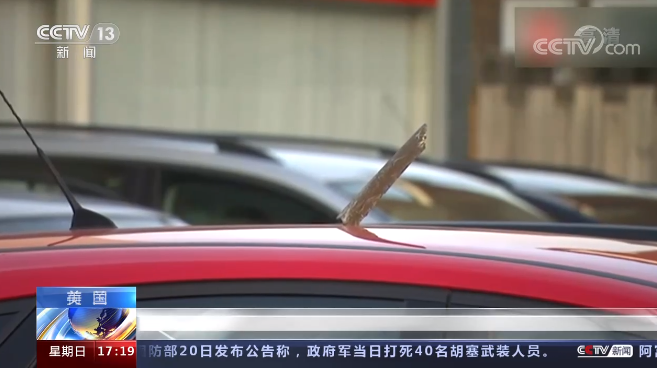 On the same day, after a Boeing 747-400 cargo plane took off from Maastricht, the Netherlands, the engine exploded and the debris fell from the air, causing slight head injuries to an elderly woman on the ground and burns to a child while picking up debris on the ground. Some damaged engine turbine blades also hit several cars on the ground. 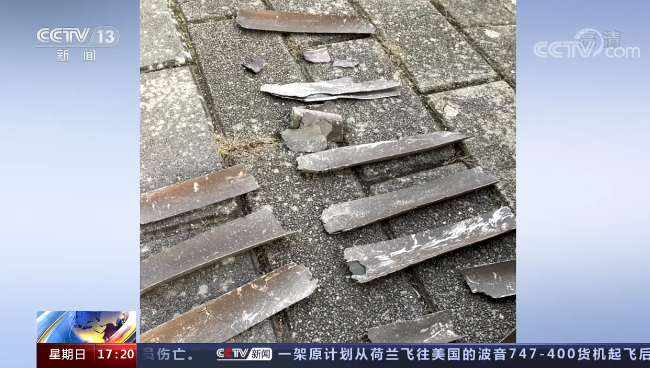 According to reports, the cargo plane originally planned to fly to New York, after the accident changed its route and landed in Belgium. At present, the investigation of the accident is in progress.

Passenger on board: the plane is shaking and a huge explosion is heard

On the 20th, after the United Airlines airliner with an engine failure landed at Denver International Airport, several passengers described the thrilling moment on board. 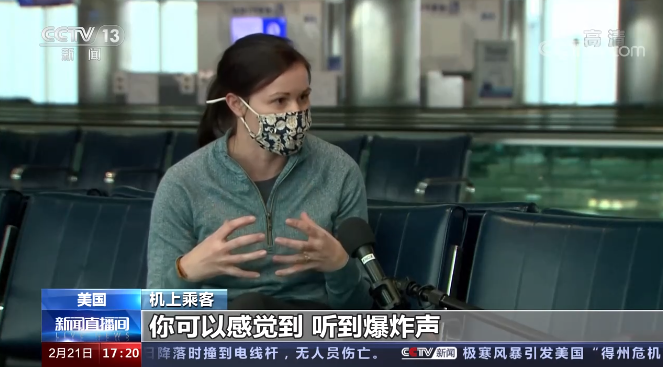 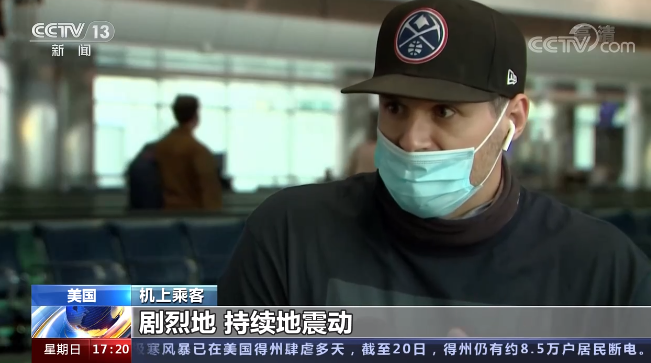 Passenger: you heard the explosion. Obviously, something's wrong. Because the plane is shaking all the time, violently and continuously. At first, there was no fire, but there was smoke. After a while, there was fire. We're sitting next to the porthole facing the wing, so it's hard not to see. The people on the plane were in tense silence. People either didn't realize the seriousness of the problem or were in a state of shock. 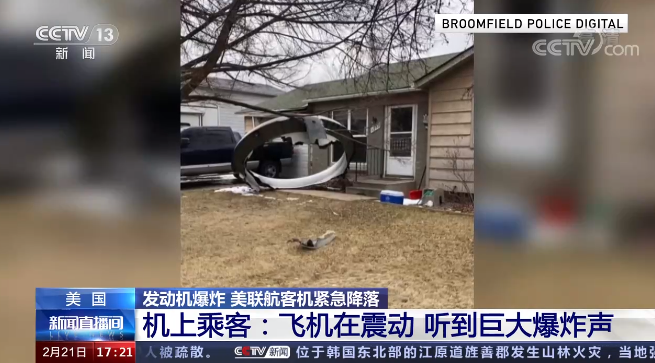 The failed engine exploded and caught fire during an emergency landing, and debris from the engine shell fell on the outskirts of Denver. Photos released by police in Bloomfield, Colorado, show pieces of aircraft parts, including an engine fairing, falling on the grass outside a home. Police said it was fortunate that no one was injured when the debris fell to the ground. 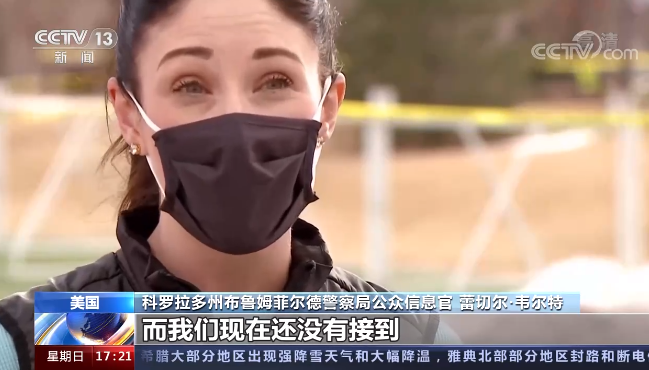 According to experts' analysis, the cause of engine fire is complex but controllable

On the same day, two engine explosions and fires occurred in Boeing series aircraft, which once again aroused people's attention to aviation safety. So why did the aircraft engine catch fire? Why can the aircraft return safely after the engine stops during flight? 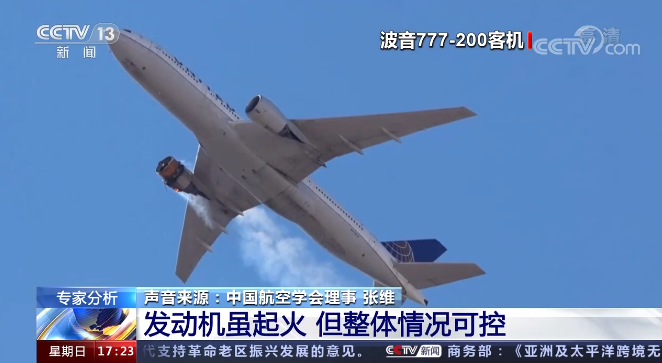 Zhang Wei, director of CAAC: the cause of aircraft engine fire is complicated. In general, it is due to the mechanical failure of the engine, such as the blade fracture leading to fuel oil, oil leakage or pipeline falling off, which can also cause fire, etc. After the engine is on fire, a fire detection device will tell the pilot that the engine is on fire. Including the United Airlines 777, there was not only a fire, but also the loss of the fairing at the leading edge of the engine nacelle. This is also a serious problem, but the condition of the whole aircraft is still controllable. These are the links that will be avoided in the process of aircraft design. Therefore, crew members will implement forced landing according to the relevant procedures of how to deal with single or double engine failure in the prior training. Especially for a large aircraft like the 777, its crew members must have good flight experience. They must have conducted forced landing procedures on many simulators. The pilot only needs to follow the procedure calmly, generally can fly the plane safely to the airport for forced landing.