SpaceX announced today that Hayley Arceneaux, 29, an assistant physician, will take part in the first national space tour! The mission is scheduled for the end of 2021. She will take off in a dragon spaceship and orbit the earth for five days. At that time, she could be the youngest American to go into space.

Hayley Arceneaux, 29, had hoped to visit seven continents before she turned 30.

However, she seems to have no time to finish the plan.

Because, she's going to space. 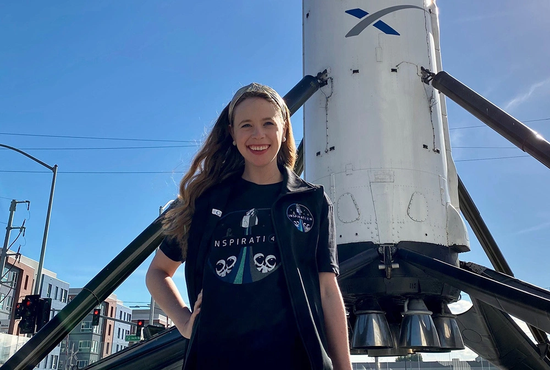 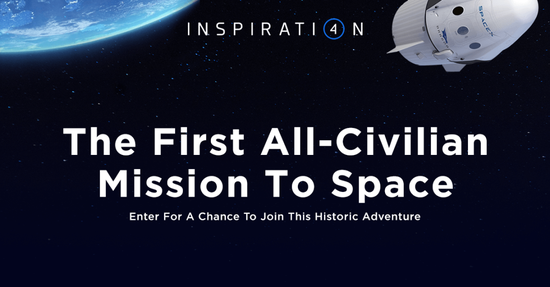 Enlightenment 4 is planned to be launched at the end of this year, which will be the first crew mission around the earth. It is worth mentioning that no one on board is a professional astronaut.

The venture was led by 38 year old billionaire Jared Isaacman, who announced in January that he would buy the launch rights from SpaceX. 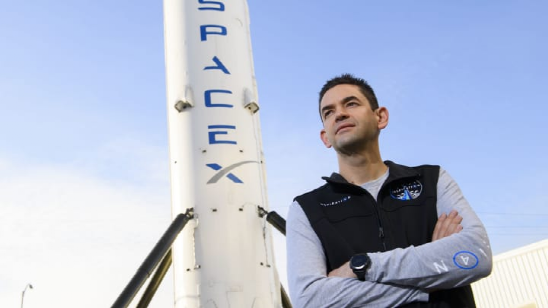 Isaacman said at the time that he hoped the mission would not be just an outing for the super rich. He had given two of the four available seats to St. Judas children's research hospital. 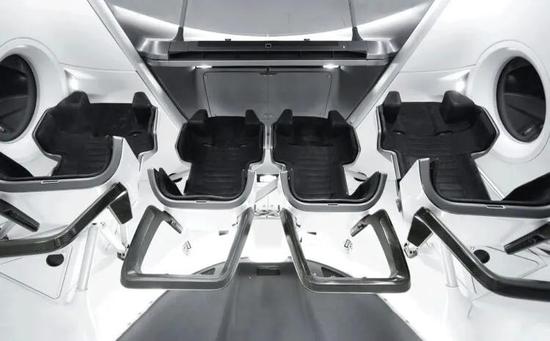 The mission initially said that one of the seats would be filled by St. Judas' front-line medical staff, a symbol of hope.

Hayley Arceneaux is the one they chose. 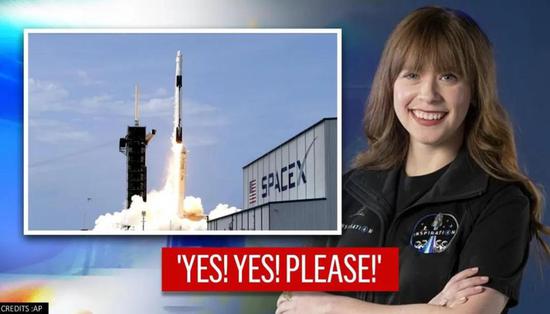 Hayley Arceneaux will be the youngest American ever to travel to orbit, and she will be the first to carry a prosthetic limb into space.

Nearly 20 years ago, she was a patient of St. Judas. As part of her treatment for bone cancer, a metal rod replaced part of the bone in her left leg.

Not long ago, she won the taekwondo black belt, but she complained about leg pain. Mother saw a bulge on her left knee. The pediatrician in the town told them it looked like a cancer.

They came to St. Judas, a non-profit medical company that focuses on children's catastrophic diseases, and patients don't have to pay for care. 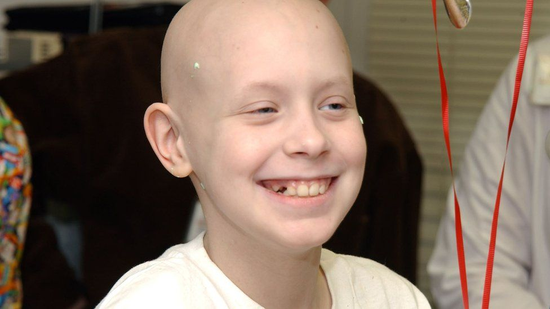 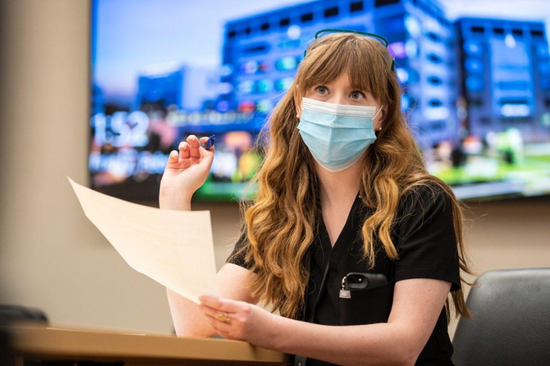 Last year, Ms. Arceneaux was hired by St. Judas hospital. She works with children with leukemia and lymphoma. Recently, she chatted with a teenage boy to help him with active treatment. 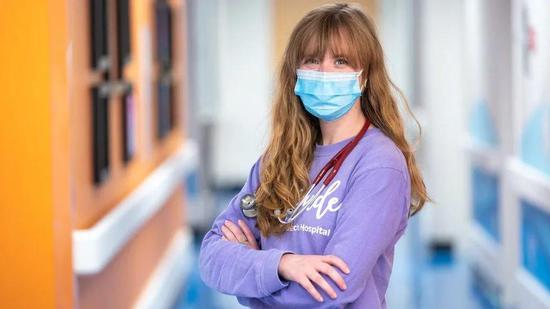 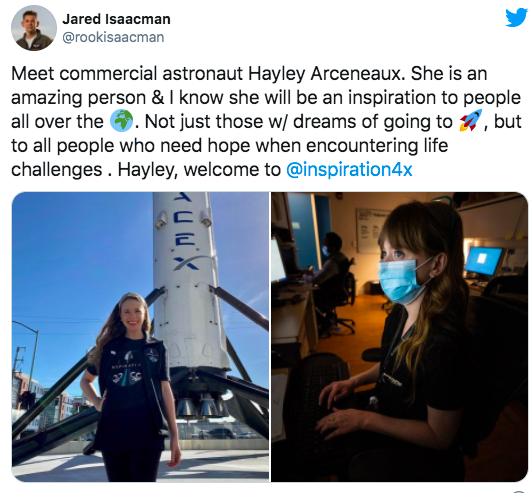 SpaceX national mission, how to select astronauts from the public? 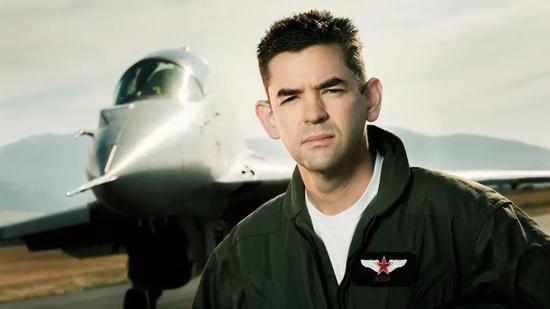 At the beginning of this month, SpaceX announced that it would send four private astronauts into orbit around the earth to carry out the inspiration 4 mission with a manned Longfei ship, which is scheduled to launch in the fourth quarter of this year.

Isaacman bought the right to use the Dragon spaceship from SpaceX and will donate three other astronaut seats to ordinary citizens in order to raise $200 million for St. Judas children's research hospital 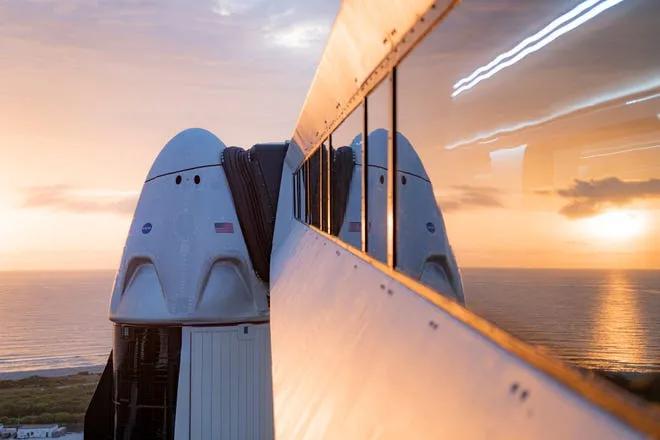 But it will be a few weeks before they know who their companions are.

One pool will include all the people who donated to St. Judas during the fundraising campaign that accompanies the launch ceremony, and the other will be selected from entrepreneurs who set up online stores on the new e-commerce platform of shift 4.

Drop out and start a business at the age of 16! US billionaire becomes SpaceX mission commander

According to Forbes, the net assets of Isaacman are $2.3 billion.

Among them, he invested 100 million US dollars to St. Judas children's research hospital to sponsor two spaceman places, one is a staff member, the other is open to the public, and many candidates draw a place from the hospital donors.

No matter how much it costs, Isaacman thinks it's a small price. He said it was the first step to the idea that everyone could take risks in the universe. 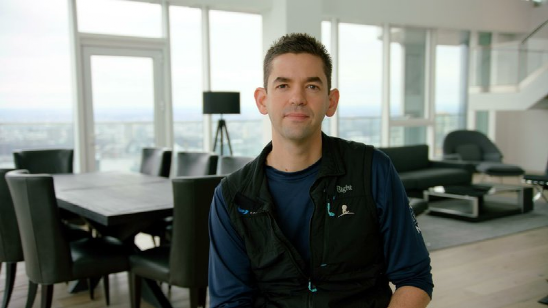 He dropped out of high school when he was 16, got a GED certificate, and started a company in his parents' basement in New Jersey, which became the origin of shift 4. 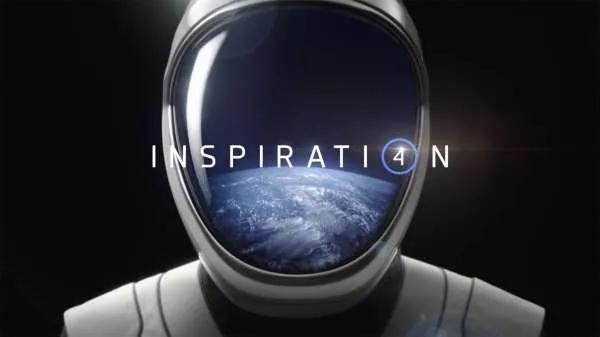 Isaacman and his friend Brendan Lauber spent a lot of their spare time fixing computers and building websites when they were teenagers, so they decided to try to make money from their skills. 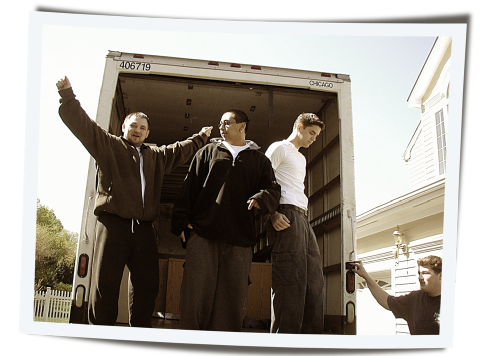 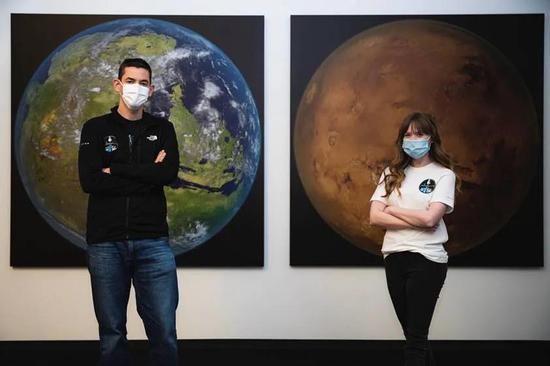 One of his clients, Mario Parisi, is the CEO of a payment processing company called Merchant Services Inc. (MSI). He was so impressed by the work of Isaacman in cleaning up the company's virus network that Isaacman's clients offered him a job as an in-house IT consultant.

So Isaacman dropped out of high school and took the job. However, his parents have only one condition: at least a high school diploma.

So when he was 16, he dropped out of high school and got a GED,

He used a check from his grandfather for $10000 as seed money to run his own business in his parents' basement.

He named the company United bankcard, which he later renamed harbortouch in 2012 and shift4payments six years later.

After its IPO in June 2020, Isaacman's stake in the company was valued at about $2.3 billion. 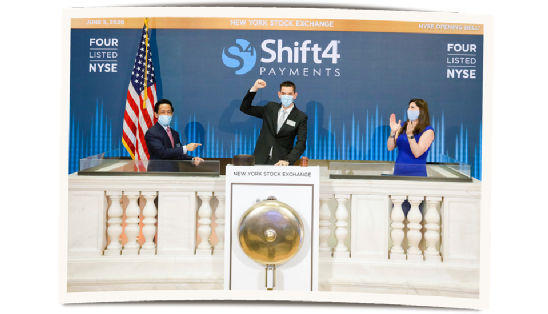 Still, he loves to look back on the early days of startups. He says the best time for a start-up is when you have lunch with eight people in the basement, everyone sharing knowledge, sharing experiences of success and failure, and learning together.

Isaacman said that before we get on the rocket and go into space, we will all be super familiar with each other on earth and have a lot to learn.

When musk announced the mission this week, he agreed with Isaacman that the national flight is an important milestone in enabling all people to enter space. 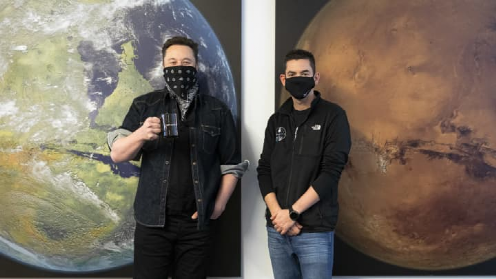 Related news
NASA's first trip to the International Space Station can take the SpaceX "special train"
One arrow and many stars, the first shot into the track, how far is China Civil Aviation from SpaceX?
SpaceX's first, NASA's last
SpaceX dragon spacecraft successfully launched NASA uses private commercial spacecraft to transport astronauts for the first time
SpaceX's second national space mission astronaut announced that she will orbit the earth for five days
Hot news this week
Is Hongmeng OS Android shell? HUAWEI Wang Chenglu: Tucao people do not make complaints about what is open source.
Netizens said that the ps5 host has been cracked: it is able to mine and calculate the power of super high-end graphics card
Tencent publishes the title party recognition patent for the first time: Based on Artificial Intelligence
I'm hiking in the tropical rain forest of China with apple watch, but my sports record is the last thing I care about
Xiaomi's new patent exposure: four shots are distributed in the four corners of the mobile phone, which can realize 3D photography
The internal test of flyme 9 of Meizu 16 series was launched at the end of April: design, privacy and function upgrade
Ma Yun bought the invention of scanning code to pay several 80s will ring the bell: an estimated value of 54 billion
Three years in vain! Sun, a programmer, compensated Tencent 976000 yuan and returned 158000 yuan for violating the competition agreement
Tencent document online mind map and flow chart, using structured thinking to achieve information management
This year's first big West Mercury show will be held on the 6th! Feel the true face of the smallest planet in the solar system
The most popular news this week
Huawei's cheapest real wireless noise reduction headset freebuses 4I first sale today: 449 yuan
The report said that Russian intelligence forged news websites to spread the wrong information about the new vaccine
From March 1, will wechat start charging for good morning and good morning pictures? Official response
Do you charge for sending such pictures on wechat? Here comes the official response
150 people have been cut in two years! Google understands how much it costs to play games
Huawei's P50 release time is suspended at the end of April: new tablet comes on stage simultaneously
Linux kernel 5.11.4 release adds support for some mainstream hardware
Samsung releases 2021 49 inch G9 super curved display: upgrade Mini LED screen, double brightness to 2000 nits
Sony drift to PC?
The U.S. Department of labor's investigation concluded that Microsoft had no misconduct in the anti affirmative action in the trump era