Suning e-buy plans to transfer 20% - 25% of its equity, and the transferee belongs to infrastructure and other industries

February 25 news: today, Suning e-buy responded to the change of control, saying that it has received a notice from the company's actual controller, controlling shareholder Mr. Zhang Jindong and shareholder Suning Electric Appliance Group Co., Ltd. that it plans to plan the company's share transfer, with an estimated transfer ratio of 20% - 25%. The equity transferee belongs to the infrastructure industry. According to the proportion of shares to be transferred, it is expected that changes in the company's control rights may be involved. The specific transaction plan of the above-mentioned items is still in the process of planning and needs to be approved by the competent department, which is uncertain.

This morning, Suning was temporarily suspended for planning a change of control. As of the trading day before the suspension, the total market value of Suning e-buy (002024) reached 65.2 billion yuan.

Previously, it was rumored that Suning Electric might have plans to sell all or part of its shares in Suning Tesco to state-owned enterprises, with a valuation range of 8 billion to 10 billion yuan. There was no official response to the information. 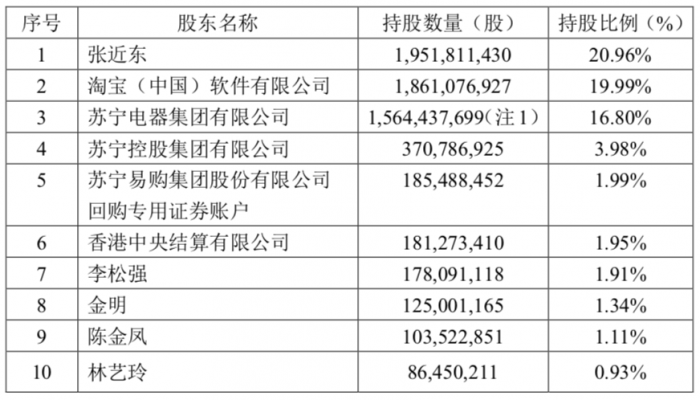 However, Suning did frequently pledge in the near future. Among the 19.88% shares of Suning e-buy held by Suning Electric, 9.64% of them have been pledged, accounting for about half of its shares in Suning e-buy.

On December 4 last year, according to the disclosure of the national enterprise credit information publicity system, Suning holding group shareholders Zhang Jindong, Zhang Kangyang (the son of Zhang Jindong) and Nanjing Runxian enterprise management center have pledged all the shares of the company to Taobao (China) Software Co., Ltd. Meanwhile, the 65000 shares of Suning real estate held by Zhang Jindong were also pledged to Taobao. Suning responded that at present, Suning holding group holds 3.98% equity of Suning e-buy, and equity pledge is a normal business cooperation, which has no substantial impact on the strategic development and normal operation of Suning e-buy.

In addition, Suning's many bonds also fell significantly. For example, the lowest price of 18 Suning 05 with a face value of 100 yuan dropped to 74 yuan, with a drop of 26%, which is not common in the bond market. However, Suning has repeatedly cashed bonds in the past three months.

Subsequently, on the evening of November 30, Suning e-buy announced that its cloud network WanDian had completed round a financing, and Shenzhen Venture Capital led the investment, with a financing amount of 6 billion yuan.

Related news
Suning in the turning point of the times and the 30-year change of China's retail industry |
Vertical industries "short and fat" evtol released for the first time: can carry 3 people
Zhang Jindong is short of money: Suning is still making money, but the hole in cash flow is getting bigger and bigger
Suning e-buy plans to transfer 20% - 25% of its equity, and the transferee belongs to infrastructure and other industries
Suning e-buy introduced state-owned strategic investment, and Zhang Jindong remained the largest voting shareholder
What happened to Suning?
Buy nembutal powder
Hot news this week
Lu Jian, president of linkedin China, responded to rumors of the "closure of linkedin China" by saying that the company will increase its investment in China even if it does not reduce it
Samsung Motor announces end to flexible printed circuit board RFPCB business Without affecting iPhone production
I can't play! The official solution to the bug in Chinese Paladin vii was provided
The video asked Net-a-Lago to apologize
On New Year's Eve, a trio on a business trip will celebrate the lunar New Year in space: a first for the Chinese
The United States exposes the higher civilization of the universe: human beings are inferior to good ones
Rolls-Royce China SAO operation caused dissatisfaction wang Sicong message not to buy: official apology
Bytes beat 9 billion yuan to acquire VR companies, then invest the chip, or to accelerate the layout "Yuan Universe"
Xiaomi appointed Li Xiao Shuang as a vice president of Xiaomi Motor, CFO Lin Shiwei, and the CEO of Stars
Xiaomi intelligent clean ecological chain enterprises to pursue technology to complete 3.6 billion yuan C round financing
The most popular news this week
Tesla Q3 earnings reading: Record net profit on revenue Pressure on new Chinese cars is coming
Microsoft CEO NADELLA is most concerned about three things: ubiquitous computing, AI big model and virtual online
Nearly 80% of teenagers in Taiwan think cyber bullying is a serious problem, according to a survey
What opportunities and challenges brought to the financial industry?
Jia Yueting is paying back the money again! Faraday's future former employees in China receive a pay rise
The storage chip faucet is 119 times the first three seasons, the chairman reporter is born, "cattle scattered" did not lose the position.
The liabilities are still 95 billion Jue Ting pays, and FF China's front employee will collect salary and consistent with the in-service.
Wechat iOS version 8.0.16 release: Voice call interface will display the other party's circle of friends only after clicking
Interbrand world has a top 100: Apple, Amazon, Microsoft, Google, Samsung
Facebook is changing its name next week: But Mark Zuckerberg hasn't decided yet