Twitter announced on Monday that it will start tagging tweets that share misleading information about the covid-19 vaccine, the verge reported. The tags will include links to information from official agencies such as the Centers for Disease Control and Prevention (CDC), tWitter plans to implement a five strike system against repeat offenders, which can lead to account lock-in and permanent closure.

The new tag is similar to Facebook's anti error message banner, or the tag that Twitter started deploying early in the epidemic. They appear as text below misleading tweets with links to information from official sources or twitter rules. Twitter said it applied the tags through a combination of manual and automated censorship systems, starting with English content. 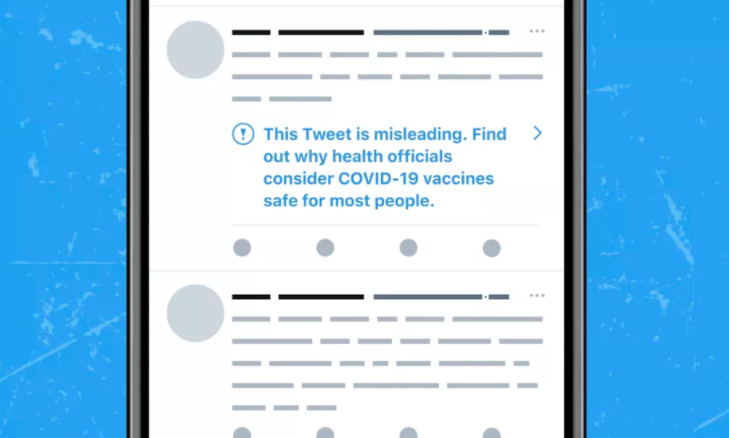 Tags are also included in the new hit system for cowid-19 error messages. A harmful, tagged tweet counts as a blow. If twitter identifies misinformation as a particularly dangerous challenge to the covid-19 treatment and invokes a larger conspiracy to connect to viruses (like vaccines, including the idea of microchip tracking people), the company can also delete tweets, which counts as two strikes. Since then, the cumulative blow at the account level will trigger different actions on twitter.

Tagging has always been part of Twitter's larger strategy to combat misinformation during the 2020 election, when politicians, including the former president, tweet inaccurate information. While these tags seem helpful, they don't necessarily prevent people from sharing information. Holding a real penalty, such as a pause, until there are five bad tweets, also means that the error message may only use some text as a warning to spread.

You can see Twitter's various penalties for different numbers of hits below.

Related news
Apple teamed up with Burberry to develop a retail messaging application called R Message
Twitter's upcoming manipulated media policy will mark misleading tweets
Twitter's new feature birdwatch: adding comments to tweets to deal with error messages
After the election ,1 million Americans left Twitte
Twitter will post the cowid-19 vaccine error message tag and implement the "five strikes out" system
Twitter shares the company's efforts to fight the new crown vaccine misinformation
Hot news this week
China has found 35 known cases of the new zoonotic virus Langya
Losses in a single quarter of $ 23.4 billion a record, SoftBank did not carry the plunge of technology stocks and the devaluation of the yen
The prevention and control of the American Monkey epidemic has failed. What should I pay attention to?
Kuaishou launched a self-developed cloud intelligent video processing chip: The chip has been streamed successfully
The new product of Xiaomi MIX is coming: both internal and external dual -screen has been upgraded to make up for the previous generation.
Ministry of Public Security: Single telecommunications network fraud continues to cause 40 % of all electrical fraud cases
A new zoonotic virus, Langya, found in China has not yet been confirmed to be transmitted from person to person
A tech company in Shanghai has been fined 220,000 yuan for swiping orders to improve its ranking on Yelp
Special price "kill ripe"? Bike-sharing platforms have different prices for the same package for different users
Alibaba: Shareholders SoftBank will settle in advance for advanced payment in advance involving a maximum of about 242 million ADR
The most popular news this week
Google Fiber's home has been silent for many years and continues to expand after many years
Gurman: Apple is going to expand advertising into the new iPhone/iPad area
Studies have shown that the attacks by the game company have doubled in the past year
Apple's new iPad does not support 3.5mm headphone hole, Baidu map big update, anchor adopted two protected plants were checked, Rui Dragon 7000 series price stolen, these are the o...
A proposed ban on Internet addiction in California has failed
Industrial star attraction strategy to cope with the American semiconductor strangulation strategy
"Mother of the Chip" suffers! The United States blocked EDA to China: not so simple
8K Super Clear screen records Lingyue of China Space Station! Only 0.72 seconds
Sell to Tencent less than a year Sogou by the big purge: three major businesses are gone
After being suppressed by the United States, why did Ren Zhengfei thank you?