Science robotics cover paper: how does a software robot walk without electronic components?

A quadruped robot appears on the cover of the latest issue of science robotics. No, it's wrong. It should be the one below. It's said that the inspiration of this robot's research and development is from the tortoise in nature. It's really a bit like that!

On February 17, 2021, the related research results were officially published in science robotics with the title of Electronics free pneumatic circuits for controlling soft legged robots, and appeared on the current cover. The author is from the Department of mechanical engineering and materials science and engineering, University of California, San Diego, USA.

Pneumatically activated soft robots have good adaptability to the environment.

At the ICRA 2017 International Conference on Robotics and automation, the Robotics Laboratory of the University of California, San Diego announced a 3D printing software quadruped robot, which the research team claims can conquer all terrain.

The robot is driven by gas, and each leg is made of three retractable inflatable rubber tubes. The four legs are connected in an X-shape, and can walk through the design of inflation or leakage.

As shown in the figure below, many robots are controlled by electromechanical components (such as valves and pumps), which are usually bulky and expensive.

Based on this, the research team designed an oscillators using soft valve.

Oscillator can be used to generate repetitive electronic signals. It is an energy conversion device that can convert DC power into AC power of a certain frequency.

The process of generating oscillatory signals is similar to that of natural organisms including quadrupeds, which use central pattern generators (CPGs) to achieve repetitive movements of limbs such as walking, flying and swimming.

Generally, this process is mediated by sensory feedback, but the structure of CPG is basically a repetitive circuit, which drives muscles to produce stable and continuous gait in order. In this case, the pneumatic muscles are driven into opposite pairs to form a diagonal (line) gait, with the diagonal legs rotating forward and backward at the same time.

This paper introduces that each leg of the robot has three degrees of freedom and needs a constant compressed air source to support the control system and drive system.

Specifically, the researchers succeeded in directing a pressure source (either a rope or a built-in carbon dioxide cartridge) to four legs through an oscillating three-way valve circuit made entirely of soft material, with three different chambers on each leg.

So, how about the principle of oscillating three-way valve circuit?

It is understood that the circuit itself is composed of three bistable pneumatic valves, which are connected by pipes to provide resistance to the flow of gas through pipes (which can be adjusted by changing the length and inner diameter of the pipe). 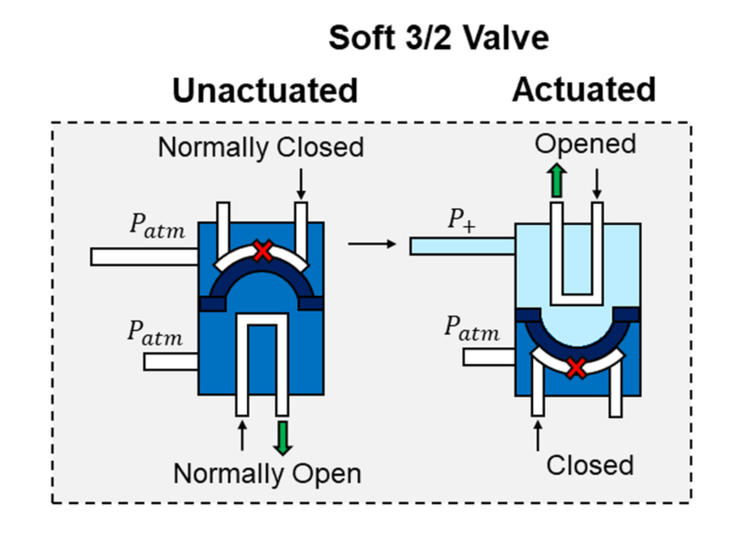 In one experiment, the researchers found that:

In addition, they demonstrated a control circuit that allows the robot to move in all directions between gait and respond to sensor inputs.

It is worth mentioning that although the Venus probe being developed by NASA's Jet Propulsion Laboratory is not a soft robot, it can operate in a similar way because it can not rely on traditional electronic systems for autonomous navigation or control. IEEE spectrum reports:

It has been proved that there are many smart ways to make robots complete relatively complex autonomous behaviors.

How to develop soft robots?

Generally speaking, the so-called soft robots are not made of soft materials as we think. This is because it is always a big difficulty to develop flexible energy supply and control components (such as flexible batteries and circuit boards).

And the coolest part of the robot is that it has a new way to achieve gait control.

This research is a step towards the application of fully autonomous robot without electronic components, which has played a role in promoting the development of low-cost entertainment robots and the application of robots in extreme environments. 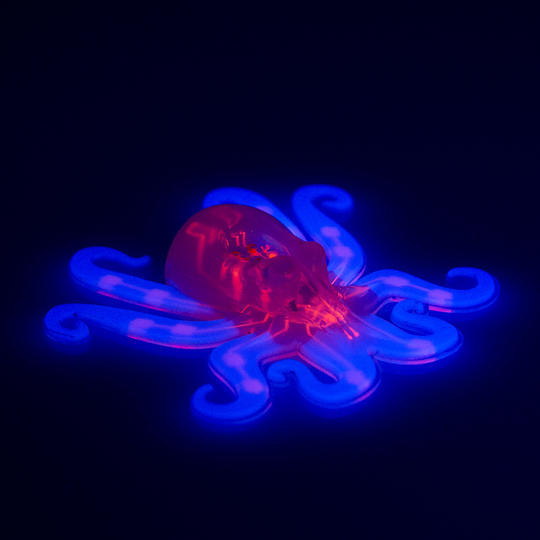 Even so, the development of soft robots is still relatively slow

In essence, soft robots should be safe, flexible and very cheap. These characteristics make it possible to be widely used. However, compared with robots in other fields, the development of soft robots is relatively slow. One of the reasons is that soft robots can not directly benefit from the remarkable development of computing force, sensors and actuators in the past few decades.

Undoubtedly, the development of soft robots is inseparable from multi-disciplinary progress, including materials science, robotics, biomechanics, sensing and control. With the rapid development of related disciplines in recent years, soft robots with different driving modes begin to emerge.

Related news
Science "persuasive retreat": reading Bo pressure mountain, it is time to drop out of school
AI has captured many people and has re-entered Science, training costs $150, and wins 1,000 knives per hour.
Science Cover Weight: MIT to build artificial muscle fiber, programmable!
Science Advances publishes flexible electronic patches that allow two-way communication with robots
Harvard's new research is on the cover of Science: This mechanical exoskeleton is a pair of "light work" shorts
Awesome China scholar! The latest paper on the cover of Science: how the new coronavirus invades cells
Google quantum computing breaks through science cover! The first quantum simulation of chemical reactions was carried out
Science robotics cover paper: how does a software robot walk without electronic components?
Hot news this week
Young people can't change their mobile phones one brother pressure in the channel inventory up to 50 million
Chinese mysterious female rich 560 million buy European luxury homes: the full amount of cash is paid at a time
Criminal gang candid courier list takes the money 8 people to be arrested
Do you make feed after Yi Lord? Zhenghong Technology M & A has mystery
The first pop -up shop in the United States opened, Bubble Mart opened the North American expansion plan
The goose factory is finally making a move on the metasverse?
The 560m Chinese woman who bought luxury homes has also been involved in JD.com's investments in Tuniu, Vipshop and Fafa Qi
With this charging treasure that can legal "stealing electricity", I don’t worry about the mobile phone out of power
Son's bet that ARM's listing will boost SoftBank's stock price?
Huawei Hongmeng has become! Many mobile phone manufacturers will follow up with Hongmeng OS technology
The most popular news this week
A large number of QQ numbers stolen official announced the results of the investigation
Tencent said major shareholders will sell their shares for a total profit of about 24.5 billion yuan
Born with a silver spoon in one's mouth, IE finally why can't escape the fate of being eliminated?
The first batch of meizu free battery replacement models are announced: Meizu 15 and other five models are listed
Meizu official celebrate Flyme 10th birthday: More surprises, wait for August
The first batch in the country! "Main Driving Unmanned" Autonomous Driving is approved
IPhone 14 revealed the earliest early August mass production Foxconn a large number of recruitment: on entry to send 5400
700MHz gold band! China Radio and Television wechat mini program launched
China Radio, Film and Television has officially announced that ZTE will be the first group to support commercial 5G broadcasting
Japan's chip industry has a 35,000 talent gap? Tech giants warn