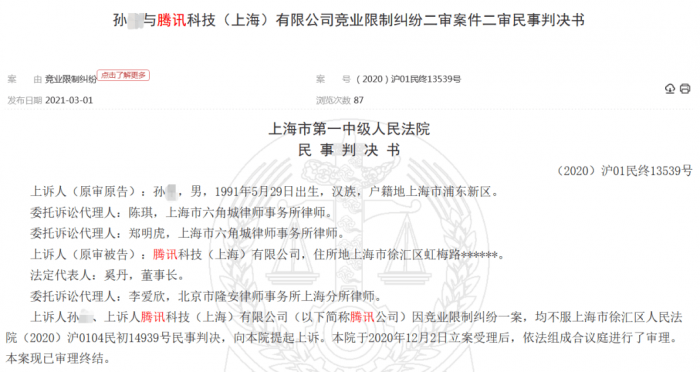 According to public information, sun was born in July 1991 and joined Tencent on July 15, 2015. The two parties signed a labor contract with the contract period from July 15, 2015 to September 30, 2018. Sun works in the aurora borealis studio. After the expiration of the contract, both parties renewed the labor contract to September 30, 2024, and agreed that sun would work in the innovation product center.

Tencent company has issued a total of 9 months of non competition economic compensation to sun in accordance with the standard of 22569.36 yuan per month since April 2019, totaling 203124.24 yuan.

Since April 2019, Mr. Sun has provided Tencent with "Notice of personal information of non compete personnel" in the form of e-mail every month, stating his post after leaving Tencent. He was unemployed in the first two months and worked in kezhirui company since June 2019. His job content and position are information system engineer, responsible for the research and development of the company's management platform. We sign the labor contract from June 3, 2019 to June 2, 2021 with kezhirui every month.

According to the facts and sun's work situation, the Court confirmed that sun had violated the obligation of non competition when he left the company and worked in a company competing with Tencent. The court should return the non competition economic compensation of 158000 yuan paid by Tencent during the breach of contract and pay the non competition liquidated damages of 976000 yuan.

During the second instance of the court, neither party submitted new evidence. After the trial, it is found that the facts determined by the court of first instance are correct, and the court confirms them according to law.

According to the first instance, Tencent was founded on July 23, 2008. Its business scope is to develop, design and manufacture computer software, sell self-produced products, provide relevant technical consultation and technical services, and engage in the import and export business of goods and technology. The companies or other organizations that Tencent has agreed to be competitive in the terms of non competition, including but not limited to Alibaba, Baidu, Qihoo 360, byte beat (today's headline) and their affiliated companies.

Previously, Xu and Qian, former employees of Tencent, were sued by Tencent for violating the competition agreement. Among them, Xu was awarded a penalty of 19.4 million yuan, which became the largest penalty in domestic competition restriction cases.

What do you think of this? Welcome to exchange and discuss in the message area!