Is the winter of Ctrip past? 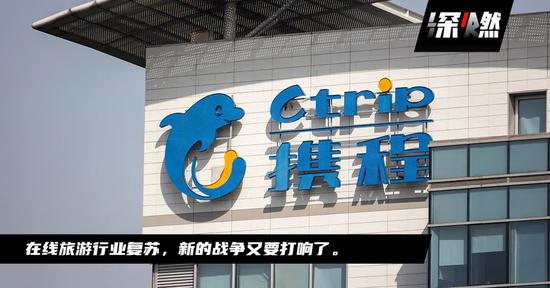 Original title: is the winter of Ctrip over?

According to the report on China's online tourism industry in 2020 released by Fastdata, Ctrip's market share is 40.7% under the Gmv caliber, ranking first in the industry.

2020 is the winter of Ctrip, to survive the dark moment, standing in the spring of 2021, Ctrip across the winter?

Every time an online travel company publishes its results, it's like a big tragedy.

Let's take a look at how much the industry has suffered in the past year.

According to the blue book of China's tourism economy (No.13), in 2020, the number of domestic tourists in China will be 2.88 billion, a year-on-year decrease of 52.1%; the domestic tourism revenue will be 2.2 trillion yuan, a year-on-year decrease of 61.1%. Both the number of tourists and the income from tourism are cut in half.

In this context, the performance of online travel platform is certainly hit hard. 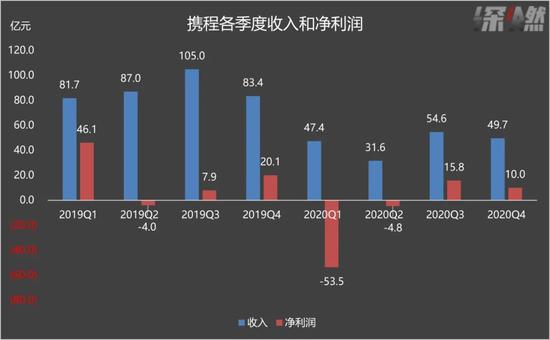 However, interestingly, when we put our vision on a global scale, we found that Ctrip is not the worst. 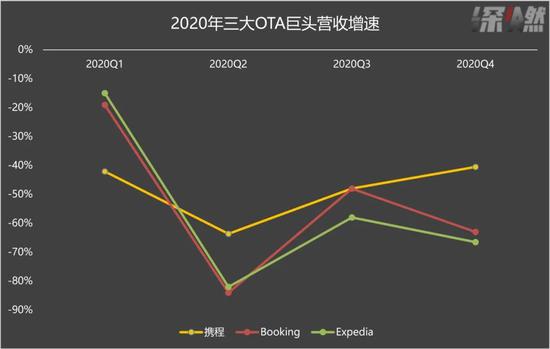 In the first quarter of 2020, the decline of Ctrip's income growth rate was the largest, because the epidemic situation in China was the most serious at that time. In the second quarter, Ctrip's revenue continued to decline by 64%, but booking and Expedia also suffered heavy losses, with the decline rate as high as 84% and 82% respectively. In the third quarter, Ctrip and booking were even, with revenue declining by 48% and Expedia by 58%.

The turning point occurred in the fourth quarter.The decline of Ctrip's revenue narrowed to 40%, but booking and Expedia are still wallowing in the mire, with platform transaction volume down 65% and 66% respectively, and revenue down 63% and 57% respectively. In addition, booking and Expedia are still losing money in the fourth quarter, while Ctrip has made profits for two consecutive quarters.

According to the report of China's online tourism industry in 2020 released by Fastdata, in the first three quarters of 2020, Ctrip's business recovery rate exceeded that of booking and Expedia, ranking first among the top three OTAs in the world. 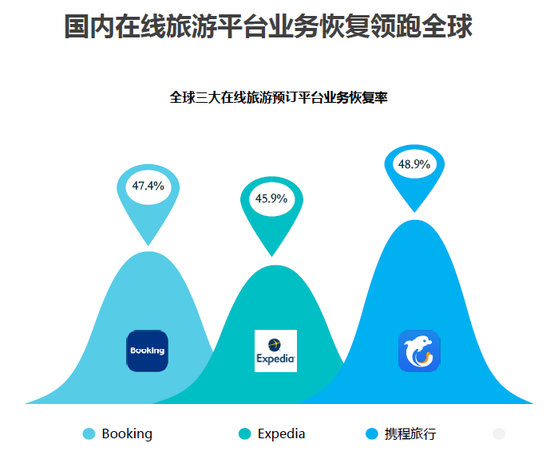 Therefore, the sharp decline in the performance of online travel companies in 2020 is a common phenomenon in the whole industry, mainly due to the epidemic rather than the company's operation. In this case, whoever can take the lead in recovering from the epidemic will have the opportunity to rise against the trend.

How did Ctrip survive?

Why is Ctrip not defeated by the epidemic black swan, but faster than the opponent to recover? 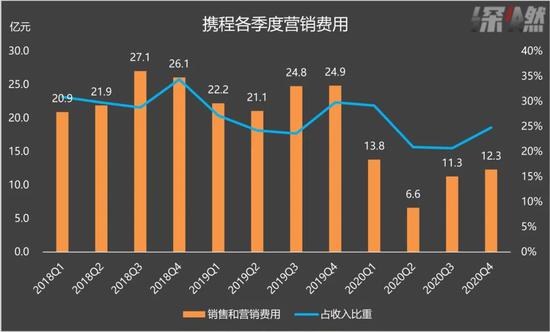 But the interesting thing is,In this case, Ctrip's product popularity, user activity and payment conversion have increased instead of decreasing.According to the data of micro hot big data research institute, in 2020, Ctrip will become the hottest online tourism platform among all kinds of online tourism platforms.

Therefore, in the third quarter of 2020, the domestic epidemic situation slightly recovered, and after the tourism market began to recover, Ctrip immediately realized its first single quarter profit. And from the perspective of profitability, Ctrip's net profit in the third quarter has returned to the level before the epidemic. 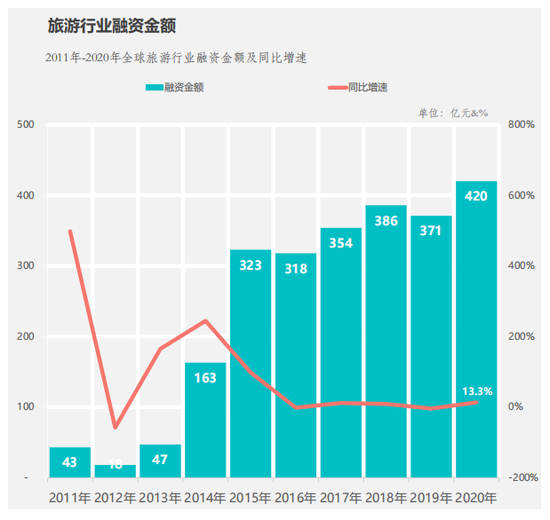 Where will Ctrip go?

In the context of comprehensive recovery, where will Ctrip go next?

Content ecology may be the next focus of Ctrip.

At the Global Partner Conference in October last year, Ctrip put forward the refinement direction of deep cultivation content. Specifically speaking, it is to excavate small and beautiful tourism products such as boutique B & B and featured play to support traffic.

The logic behind this is very simple. The platform needs traffic, and the content is a good way to revitalize the traffic that has been verified. Taobao, for example, has been doing content ecology in the past few years. Whether it's live Taobao or grass notes, it's trying to attract and retain users with content.

In January this year, Ctrip released its first brand star. The star's scenic spots, hotels and other businesses can not only release official graphics, short videos, topic interaction and challenge activities, but also use Ctrip live broadcasting platform to open live broadcasting, so that users can quickly plant grass and guide users to place orders in Ctrip.

Internationalization or another key point.

With the epidemic over, the global tourism market will recover sooner or later. In the past year, Ctrip has seized the opportunity of domestic market recovery, and it is very important to seize more market share with the global recovery. 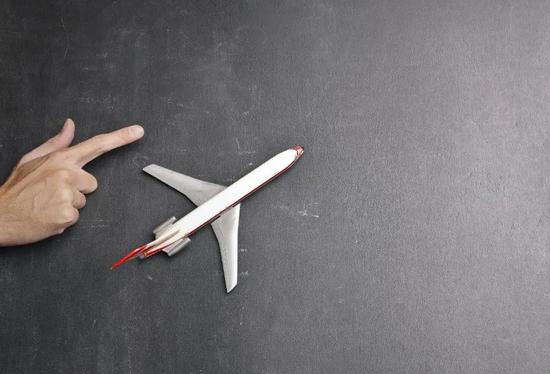 In the past many years, Ctrip's market was mainly in China. With the merger of qunar and the acquisition of elong, Ctrip became the first leader in the domestic online tourism industry. Then Ctrip put internationalization on the agenda and began to vigorously expand cross-border business.

To expand the overseas market, Ctrip mainly adopts the following ways: one is to directly acquire or become a shareholder of overseas OTA platform, the other is to establish distribution agreements with major international hotel groups, and the third is to cooperate with international Ota The fourth is to sign distribution agreements with overseas distributors, which is equivalent to becoming the next level distributors. In addition, overseas branches and call centers are set up, and overseas ground promotion teams are established.

Ctrip's self operated call center mode is also an important reason for its rapid recovery from the epidemic and continuous cost reduction, which is also a major advantage of Ctrip compared with booking. Booking's call center services take the form of outsourcing, Ctrip is self-supporting mode, self-supporting mode in the early need to invest more capital, cost, but the future leverage effect is more obvious.

For Ctrip, the overseas market is the next highland to compete for, and may become the second growth engine. But it also means it needs to fight booking and Expedia on a global scale. With the recovery trend of tourism industry clear, the coldest winter is about to pass, the war of online tourism industry will start again.

*The picture comes from visual China.

Related news
Developers say: after Baba is you became popular, how to play new games calmly?
Is the winter of Ctrip past?
Hot news this week
2021 Hurun self made list of the richest people under 40: 38 year old Zhang Yiming ranks first in China
Tencent Teana laboratory holds a cross boundary Seminar on artificial hearing technology: cochlear implant technology is undergoing cross boundary development
Dada's latest equity exposure: Jingdong is the major shareholder, and Kuai Jiaqi holds 7.8% of the shares
Shell equity exposure: Zuohui has 81% of the voting rights, and Tencent holds 5% of the shares of two shareholders, hillhood
For the first time in history! Sanxingdui "cornucopia" 3 pit successfully took out the complete round mouth square statue
Xiaomi donated to Tsinghua University to set up Xiaomi artificial intelligence Innovation Research Fund
Benchmarking Tesla semi? Geely responded to rumors of developing pure electric heavy truck: no comment
Spend another 20 billion dollars to buy nuance, where did Microsoft spend its ten-year "cash" capability?
With over 17 million number carrying users and 99% success rate in one hour, is it the best time to handle it?
Lenovo he Zhiqiang: the cumulative income exceeds US $500 million, Lenovo venture capital enters the payback period
The most popular news this week
Ctrip landed in Hong Kong stock market today, with a market value of more than 170 billion Hong Kong dollars
It is reported that Lianfa technology will use 4nm technology to manufacture 5g mobile chips
Tesla hit a tree at high speed, two dead! Police: driving without driving
Hackers focus on virtual currency! A man was stolen more than 2 million yuan
Better than snapdragon 888! Samsung Galaxy Z fold 3 uses snapdragon 888 plus
Post-90s and post-95s become the main force of blind date: China's single population exceeds 200 million
Cryptocurrency crash Market: some people crazy cash out, the U.S. government to move
Not ppt! Take alpha s, Huawei's autopilot, and deliver the Huawei version within this year
1 billion US dollars, over 5000 R & D personnel! Huawei Wang Jun: Huawei Bu has no revenue target this year
Why is "Huawei automobile" known as the first automatic driving? Top executives reveal secrets in person