Hackers can take over any accessible exchange server without knowing the valid account credentials. Up to now, more than 5000 right-click servers have detected webshells, more than 60000 customers have been affected, and many important institutions such as the European Banking authority have been attacked.

Since February 28, 2021, exchange users have been attacked continuously. First, tick, then lucky mouse, calypso and winnti gangs have started to attack quickly. This shows that many hackers got the details of the vulnerability before the patch was released, which means that we can abandon the possibility that they can reverse engineer the Microsoft Update to build the vulnerability.

On the second day after the patch was released, hackers took more crazy attacks, including teams such as Tonto team and mikroceen, which also launched attacks on the exchange server. Interestingly, all of these are advanced persistent threat (APT) organizations interested in espionage, with one exception (dltminer), which is associated with a known crypto mining activity. The figure below is an overview of the attack timeline.

In the past few days, ESET researchers have been paying close attention to the number of webshell detections for these vulnerabilities. Based on the telemetry data of ESET, more than 5000 exchange servers in more than 115 countries were marked as webshell on the patch release date, and the actual number of infected servers must be more. Figure 2 shows the detection before and after Microsoft patch. 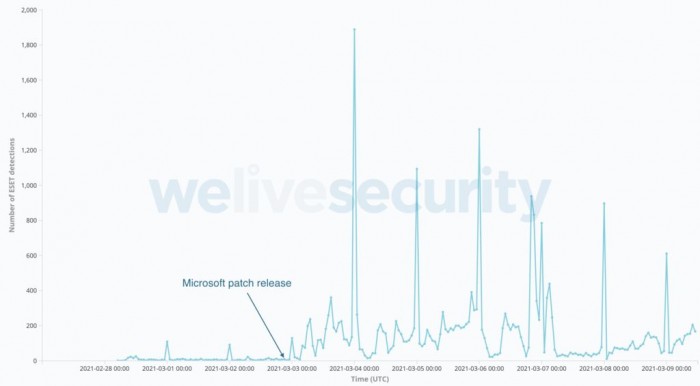 The heat map in Figure 3 shows the geographical distribution of webshell detection based on ESET telemetry. Due to large-scale utilization, it is likely to represent the global distribution of vulnerable exchange servers with ESET security products installed. 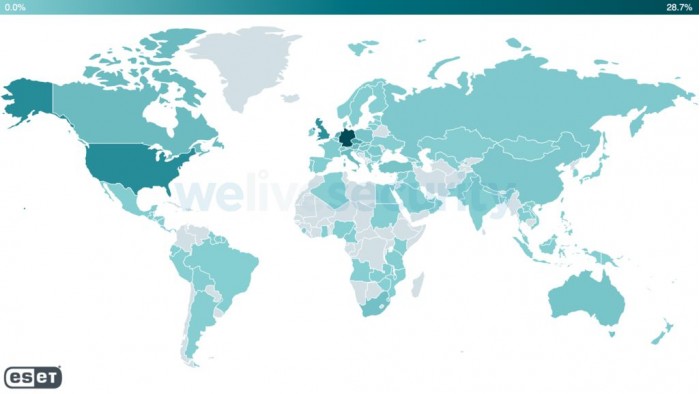 ESET has identified more than 10 different cyber threats who are likely to take advantage of the recent Microsoft Exchange rce to install implants on the victim's email server.

Our analysis is based on e-mail servers. We found webshell in the configuration file of offline address book (OAB) on these servers. This is a special technology to exploit rce vulnerability, which has been described in detail in a blog article in unit 42. Unfortunately, we can not rule out that some threat actors may hijack webshells launched by other groups instead of directly using the vulnerability. Once the vulnerability is exploited and webshell is installed in place, we observe that some people try to install more malware through it. We also note that in some cases, several threat actors target the same organization.

Related news
Microsoft decided to postpone the end date of Exchange Server 2010 Extension Support
There are signs that Microsoft Exchange vulnerabilities have been exploited by hackers, and at least 30000 organizations have been affected
Microsoft publishes utility tools to help check whether the exchange server has been invaded by hafnium
At least 10 apt hacking groups launched attacks on Microsoft Exchange servers
Microsoft Exchange server Vulnerability targeted by "at least 10 hacker organizations"
Microsoft Exchange backdoor can be used to steal credentials
Hot news this week
Alibaba launched a new cross-border e-commerce platform in Spain, aiming to operate independently in the middle and high-end market
It's not just Huawei! Beidou has penetrated more than 20 industries and applied more than 15.5 million products
The appearance of Xiaomi's mini console is revealed for the first time: an all-metal body with a strong apple smell
Guo Ming ð «  creates: apple MR head or extended to the second half of next year, mass production shipment is less than 5
Breaking the spell of "Android 3 year must card", the new Breguet mobile phone will be sold for the first time tomorrow: from RMB3499
When pure water is used in China team to solve the problem of seawater hydrogen production: it is expected to become an original industry
Apple is recruiting neurorendering research scientists to create immersive experiences for AR/VR products
The United States, the most powerful chip designer, now has a crisis: it is shooting itself in the foot
Manufacturers like Samsung and Xiaomi have been affected. Google has revealed a dangerous flaw that threatens millions of Android devices
Be careful with your phone for a long time! The aunt played with her mobile phone so much that her fingers got stuck
The most popular news this week
Standard iP14! This is the no-miss flagship Mi 13 Series: a big upgrade compared to 12/12S
You know what? Looking at your phone while driving is the equivalent of driving blind for about 50 meters, which is extremely dangerous
The United States has approved the first fecal transplant to treat disease by transplanting someone else's feces
Amazon has withdrawn a new offer from its retail division, cutting off new employees who were due to start early next year
Apple has delayed the launch of Apple Pay in South Korea due to a local censorship clause
Dalitsu, a lens supplier for Apple's iPhone 14, reported revenue of NT $5.231 billion in November, up 20 percent from a year earlier
Apple is considering making some iPad models In India
An international first! The experiment of space culture of complete life cycle of rice was completed
Musk's brain-computer interface company Neuralink was revealed to be the subject of a US federal investigation, just four days after releasing a timetable for human trials
Microsoft said the acquisition of Activision Blizzard would help the game industry innovate