"Brake failure" into the ditch, after-sales use it as "rollover"! Tesla shakes the pot again 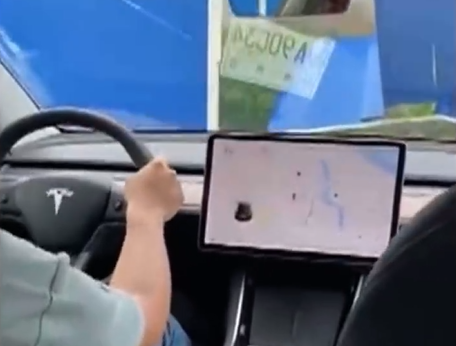 According to media reports, Mr. Meng of Haikou bought a Tesla in January this year, but on the morning of March 11, when he drove to the unit to stop, he found that the car couldn't stop. The speed was only 2 or 30 kilometers per hour. The car didn't brake in time and was driven into the ditch.

Mr. Meng recalled that he stepped on the three foot brake before and after, and the last foot was dead. The car still couldn't stop and rushed out into the ditch.

At first, Mr. Meng suspected that it might have something to do with his driving style or road conditions. Later, Mr. Meng contacted insurance and Tesla after-sales service.

After the after-sales personnel arrived at the scene, they drove another Tesla car for the actual demonstration, and the result was the first scene. The scene was extremely embarrassing, and Mr. Meng recorded the situation with his mobile phone in the back row.

As the saying goes, if there is no contrast, there will be no harm. According to the video, another fuel vehicle on the scene stops just before hitting the wall under the same road conditions and speed.

At the same time, for this scene, Mr. Meng's colleagues joked that it's time to ask a trailer to tow your car. In addition, Mr. Meng Fang said that the first two can be stepped down, but the last one can not. In this regard, Tesla after-sales staff said that it may also be related to the slippery road.

Regarding this view, Mr. Meng Fang said: now it's not the problem of whether the road is slippery or not, but that the brake can't be stepped down.

However, the other side said that the problem had been communicated with the car owner before, and the specific details were subject to the official announcement.

The other side said: after the analysis of the background data of the vehicle, Mr. Meng's vehicle is not abnormal, there is no vehicle out of control or braking problems.

Mr. Meng, the owner of the car, expressed some doubts about the after-sales statement and hoped that Tesla officials could give a more convincing explanation. And frankly speaking, I'm a little worried about driving Tesla on the road. When I saw a car in front of me, I started to slow down all the way, afraid that I couldn't stop the car.

At present, the two sides are still communicating and negotiating on this matter, and we will also keep an eye on it.

Related news
13 years of history NVIDIA gave up Tesla brand in a low-key way: name collision with electric vehicles
NVIDIA gives up Tesla brand in a low-key way: because of its name collision with famous electric vehicles
NVIDIA classic computing card series Tesla to be renamed: too confusing with Tesla
Hot news this week
2021 Hurun self made list of the richest people under 40: 38 year old Zhang Yiming ranks first in China
Tencent Teana laboratory holds a cross boundary Seminar on artificial hearing technology: cochlear implant technology is undergoing cross boundary development
Dada's latest equity exposure: Jingdong is the major shareholder, and Kuai Jiaqi holds 7.8% of the shares
Shell equity exposure: Zuohui has 81% of the voting rights, and Tencent holds 5% of the shares of two shareholders, hillhood
For the first time in history! Sanxingdui "cornucopia" 3 pit successfully took out the complete round mouth square statue
Xiaomi donated to Tsinghua University to set up Xiaomi artificial intelligence Innovation Research Fund
Benchmarking Tesla semi? Geely responded to rumors of developing pure electric heavy truck: no comment
Spend another 20 billion dollars to buy nuance, where did Microsoft spend its ten-year "cash" capability?
With over 17 million number carrying users and 99% success rate in one hour, is it the best time to handle it?
Lenovo he Zhiqiang: the cumulative income exceeds US $500 million, Lenovo venture capital enters the payback period
The most popular news this week
Ctrip landed in Hong Kong stock market today, with a market value of more than 170 billion Hong Kong dollars
It is reported that Lianfa technology will use 4nm technology to manufacture 5g mobile chips
Tesla hit a tree at high speed, two dead! Police: driving without driving
Hackers focus on virtual currency! A man was stolen more than 2 million yuan
Better than snapdragon 888! Samsung Galaxy Z fold 3 uses snapdragon 888 plus
Post-90s and post-95s become the main force of blind date: China's single population exceeds 200 million
Cryptocurrency crash Market: some people crazy cash out, the U.S. government to move
Not ppt! Take alpha s, Huawei's autopilot, and deliver the Huawei version within this year
1 billion US dollars, over 5000 R & D personnel! Huawei Wang Jun: Huawei Bu has no revenue target this year
Why is "Huawei automobile" known as the first automatic driving? Top executives reveal secrets in person