Four Zero Day vulnerabilities in Microsoft Exchange have been targeted by at least 10 advanced persistent threat (APT) hackers who have installed web shell backdoors on about 5000 servers across 115 different countries, which allow remote control of servers through web browsers. Last week, four vulnerabilities in Microsoft's exchange server became the focus of news. At that time, we heard that a hacker organization launched an attack on the e-mail servers of about 30000 U.S. government and business organizations.

ESET, a security research company, found that at least 10 apt organizations were taking advantage of these vulnerabilities to try to invade servers around the world. Winniti group, Calypso, tick and other hacker groups were found to be involved in the incident. 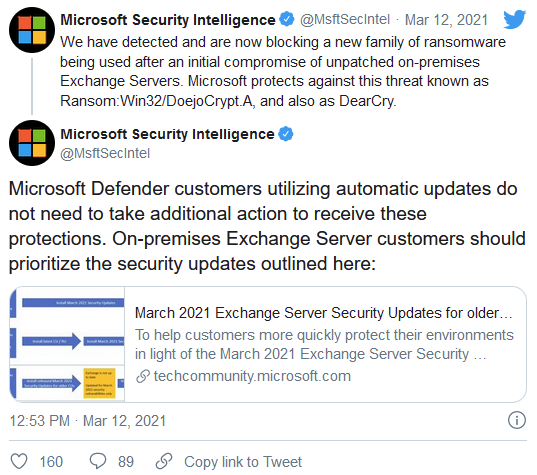 How to deal with it?

Enterprises and organizations should urgently use Microsoft's updates to patch their servers, and then carefully check the logs to see if the web shell has been installed.

Related news
Infused with Fluent design inspiration: Microsoft registered the new Exchange logo
Microsoft decided to postpone the end date of Exchange Server 2010 Extension Support
There are signs that Microsoft Exchange vulnerabilities have been exploited by hackers, and at least 30000 organizations have been affected
Microsoft publishes utility tools to help check whether the exchange server has been invaded by hafnium
At least 10 apt hacking groups launched attacks on Microsoft Exchange servers
Microsoft Exchange server Vulnerability targeted by "at least 10 hacker organizations"
Hot news this week
Capital does not love SAIC, "flying" subsidiary, Jet Hydrogen Technology intends to go to science and technology board
Wechat: It will not be possible to create an account for controlling comments and Revelations related to star artists
WeChat Alipay personal collection code will not be used for business collection, digital currency sector rises
Big bang! Wechat, Alipay personal payment code can not be used for business payment, what is the impact on you?
1.6 billion yuan too cheap? BMW's $1.6 billion takeover of Brilliance's Factory in China has been called off
Interpretation of the more than Q3 financial results: dead agriculture shrink self-employment, transformed into "more farmers"? | the planet of wealth
From March 1 next year, the personal payment code of wechat Alipay will not be used for business payment
Is it the brother who 'cuts' me? The blue-moon issuer has cut jobs, with some employees saying the year-end bonus won't be awarded
Exclusive | New Oriental new Progress: in the United States to open Chinese line classes subsidiary to undertake the transformation
European Telecom I hope that the US science and technology giants bear the cost of network construction
The most popular news this week
Netease cloud music listed on the first day, now falling 0.68% reported HK $ 203.6
Station B bought a stake in game developer Xinguang Liumei, whose products include Warring States Period
Sohu layout knowledge live
Intel discrete graphics name, performance exposure: chasing NVIDIA two years ago
Xiaomi's first 4K new product hits! It is highly recommended
Mobile phone storage is really not the bigger the better 18GB ordinary people can not use
The next generation of OS Stable Edition is ready! Xiaomi 12 is perfect
Microsoft is doing something again: overlord means to make Windows 11 users speechless....
Xiaomi Qualcomm 8 Series gods were bought out by foreigners! Direct laughter black five
Qualcomm Snapdragon game development kit is officially released: with an "exclusive" game chip