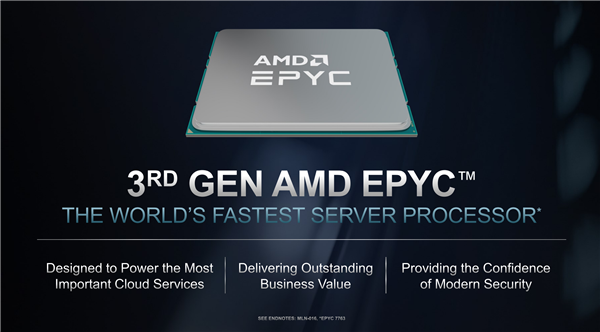 For AMD, if it wants to make more profits, it is a very important step to seize more share in the server market.

According to foreign media reports, today Microsoft and AMD announced a new cooperation, and the cooperation is based on AMD's latest epyc 7003 series processor to achieve more in-depth azure trusted computing options.

Mark Russinovich, chief technology officer of Microsoft, praised the new cooperation with AMD, claiming that the further expansion of the relationship between the two sides can bring azure customers practical and available confidential computing options.

The azure virtual machine based on amp epyc CPU will run in the form of full encryption, and can generate a private VM encryption key. At the same time, the new key generation process can greatly reduce the manual setting intervention, which is a huge attraction for consumers and enterprise customers.

Azure will provide certification service and provide encryption signal to azure key vault after collecting correct hardware environment clues. The decryption key of the virtual machine image is released safely only when the environment is in a known state.

It is worth mentioning that AMD's third-generation Xiaolong server CPU also supports local hardware users to encrypt the entire virtual machine without recompiling code. At the same time, it can take advantage of azure's constantly developing supporting security measures.

The extended cooperation between Microsoft and AMD is expected to make VM more secure on the third generation Xiaolong platform, and not vulnerable to bootkit, rootkit, and kernel level malware attacks.