From Tesla fans to activists, what happened to them? 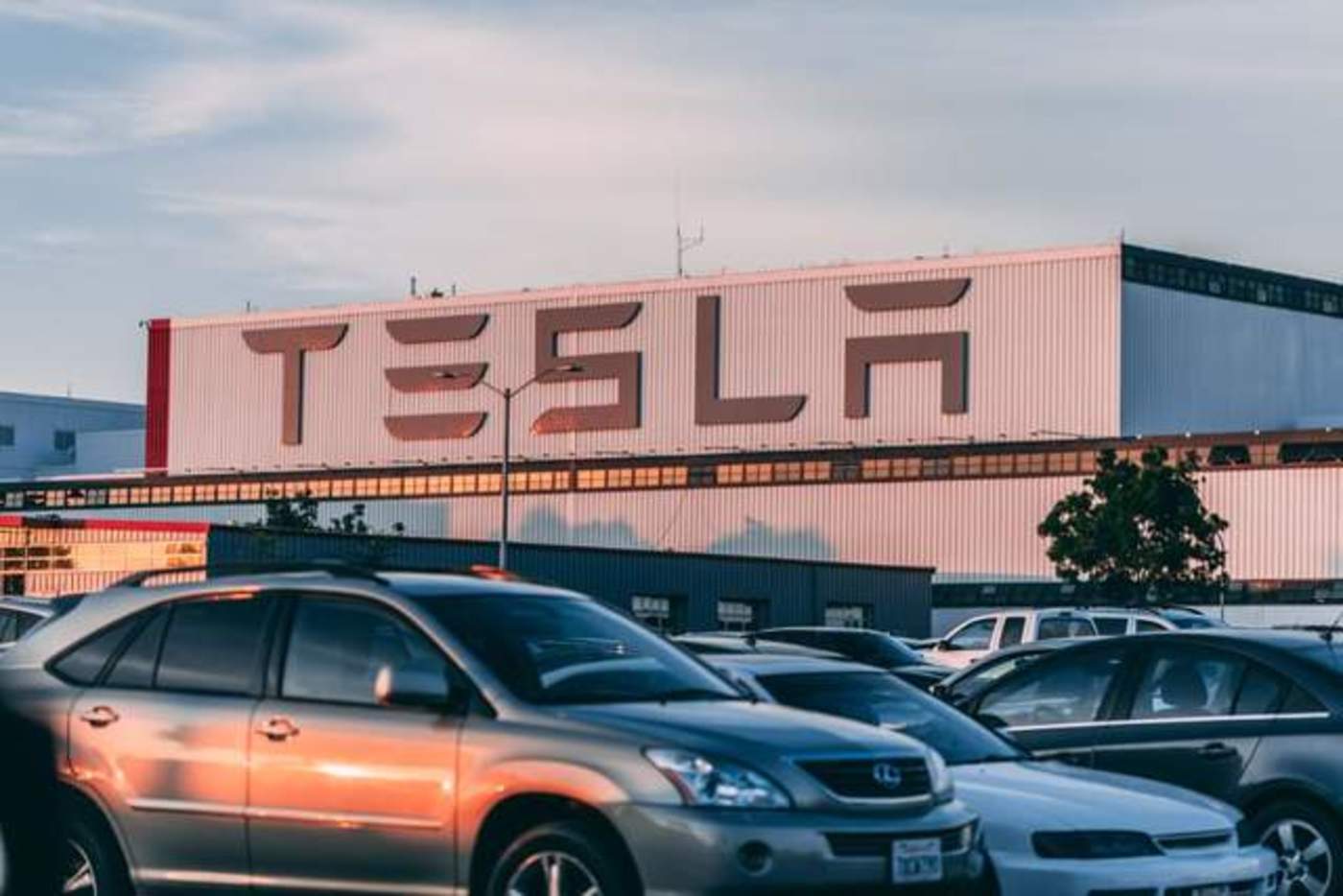 The author is Zhang Kaijing, editor

Who is the most popular car company in the past year? In the face of this problem, Tesla calls it second, I'm afraid no one dares to call it first.

Since the beginning of 2020, Tesla's share price has been rising all the way. On January 25, 2021, Tesla's share price even rose to $900.4, with an increase of more than 800% in more than a year. As a result, CEO musk surpassed Warren Buffett, Zuckerberg, Bill Gates, Bezos and others, and successfully ascended to the world's richest man. You know, Toyota, the world's first car sales company, has a market value of just over $200 billion.

However, behind the brilliant performance, some Tesla owners are dejected. In the past year, Tesla across the country frequently encountered various problems, such as spontaneous combustion, out of control, charging resistance and so on. According to incomplete statistics, in the first month of 2021 alone, Tesla had four out of control events, one spontaneous combustion event and one charging failure event.

The owner of model s was cheated by Tesla, and the court decided to refund one for three

Han Chao, the owner of Tesla, is the one who supports female car owners. Because of his dispute with Tesla, Han Chao has transformed from a pure owner of Tesla to a rights blogger of Tesla. After more than a year of ups and downs, his lawsuit was finally decided by the people's Court of Daxing District in Beijing that Tesla should pay one back for three.

However, Han Chao did not expect that this purchase has become the beginning of the road of rights protection.

According to Han Chao, before purchasing, Tesla sales told that there were no major accidents, blisters, fire and structural damage in the certified car. However, when they asked the sales for the vehicle condition test report, the other side did not provide it. In line with the trust of Tesla officials, Han Chao paid the full amount in a lump sum.

In August 2019, Han Chao was driving Tesla on a high speed with a speed of about 120km / h. suddenly, the car gave a bang, the brake and switch were completely paralyzed, and five fault codes jumped out. Han Chao took advantage of the idle speed to slip to the emergency lane, and then the car was transported to Tesla service center. After a week of inspection, Han Chao was told that the battery umbrella valve and insurance of the car were broken and needed to be replaced, the battery could not be connected, and the accessories needed to be replaced for testing.

After the incident, Han Chao had doubts about the condition of the vehicle, and found a local authoritative testing agency with judicial expertise qualification in Tianjin to test the vehicle. The result was that the C-pillar and rear fender of the vehicle were cut and welded. So far, Han Chao asked Tesla to replace a safe second-hand certified car, but the latter refused. The company said that the car can be replaced, but it needs to be damaged first, and then it can be replaced with more money.

Dissatisfied with the way the company handled it, Han Chao took Tesla to court.

Although the car was bought in Tianjin, it was mentioned in the contract that Tesla has the right to transfer legal issues to any company in the country. Therefore, after a jurisdiction dispute, the case was formally filed in Beijing Daxing District People's Court on March 10, 2020. 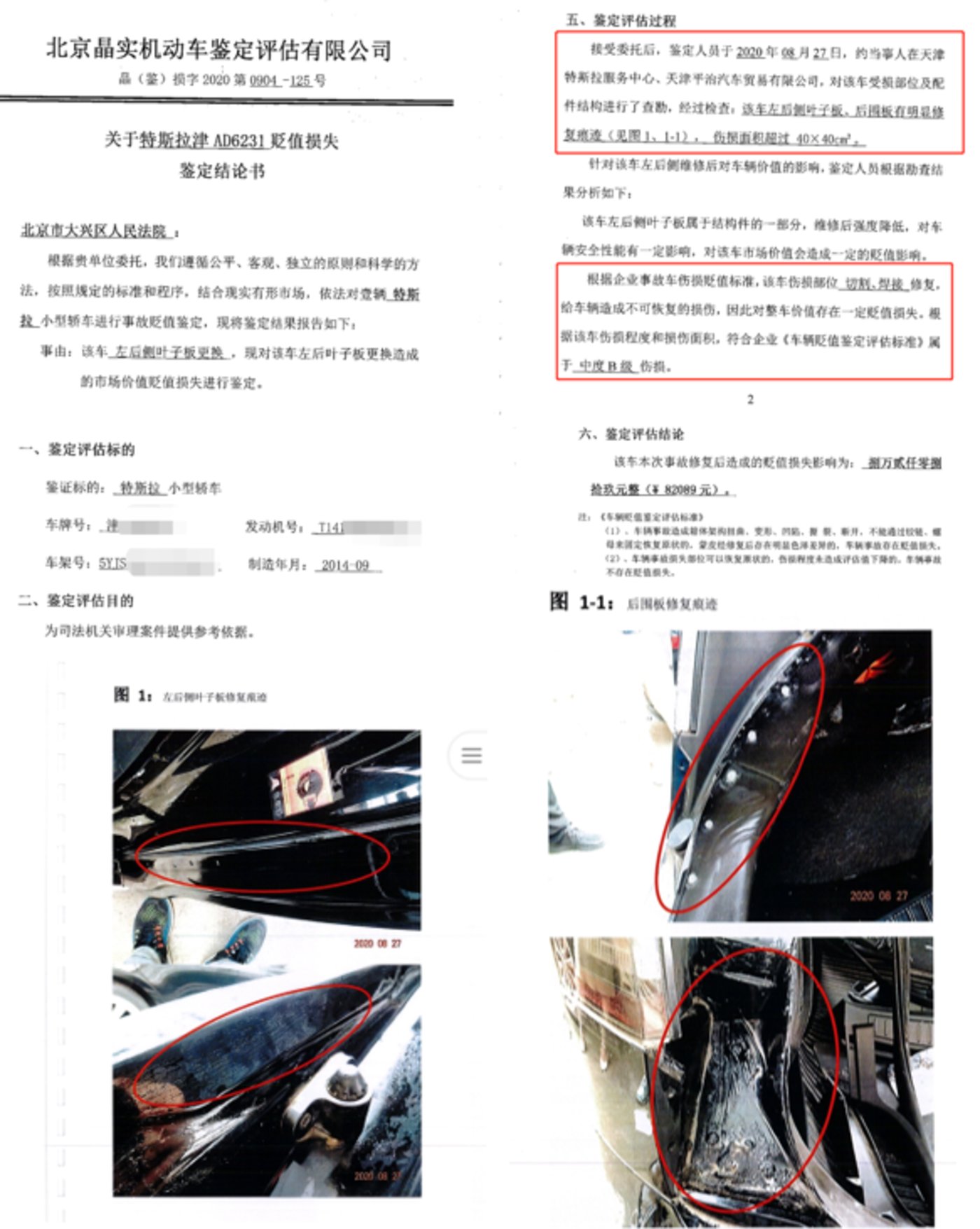 At the same time, Tesla invited an expert witness to appear in court, pointing out that this is indeed a small problem, and later verified that the expert is an employee of Tesla. After negotiation, the court decided to identify whether the C-pillar cutting and welding repair of the vehicle has an impact on the value and safety of the vehicle. The result of the identification is that the value of the C-pillar cutting and welding of the vehicle is 241100 yuan, and Han Chao bought it at 138600 yuan higher than the market price. 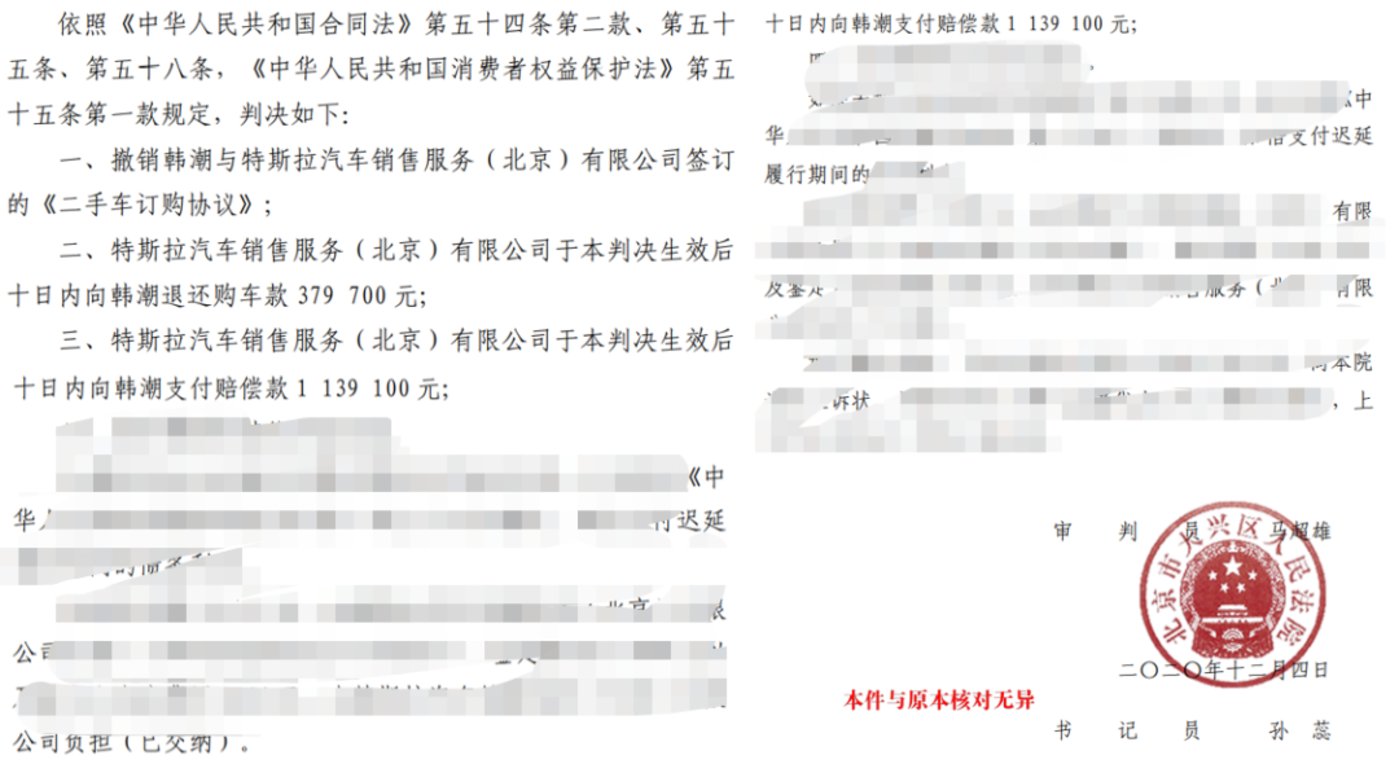 Han Chao said that according to the current national standard GB / t4780-2020, the cutting part is definitely a structural part, so it must be structural damage.

Now, Han Chao has become a Tesla rights blogger. When asked why he did so, Han Chao said that he only made some news every day before, but gradually many Tesla owners with problems found themselves and became auto bloggers in the process of communication.

Model 3 performance owners vow to fight Tesla to the end

Less than a month later, the car began to make a strange noise. At the beginning, I didn't find a specific location until one day I opened the trunk and the back bar fell off. In this regard, the after-sales explanation is that it is broken after leaving the factory and can be replaced free of charge. However, in the process of replacement, after-sales scratched the fender and rear bar of the car.

In the middle of the month, Tesla sent the car for after-sales inspection. On the ground of entering the site for upgrading, it proposed to replace the front motor, and repeatedly stressed that this is not a recall, and the vehicle itself has no potential safety hazard. 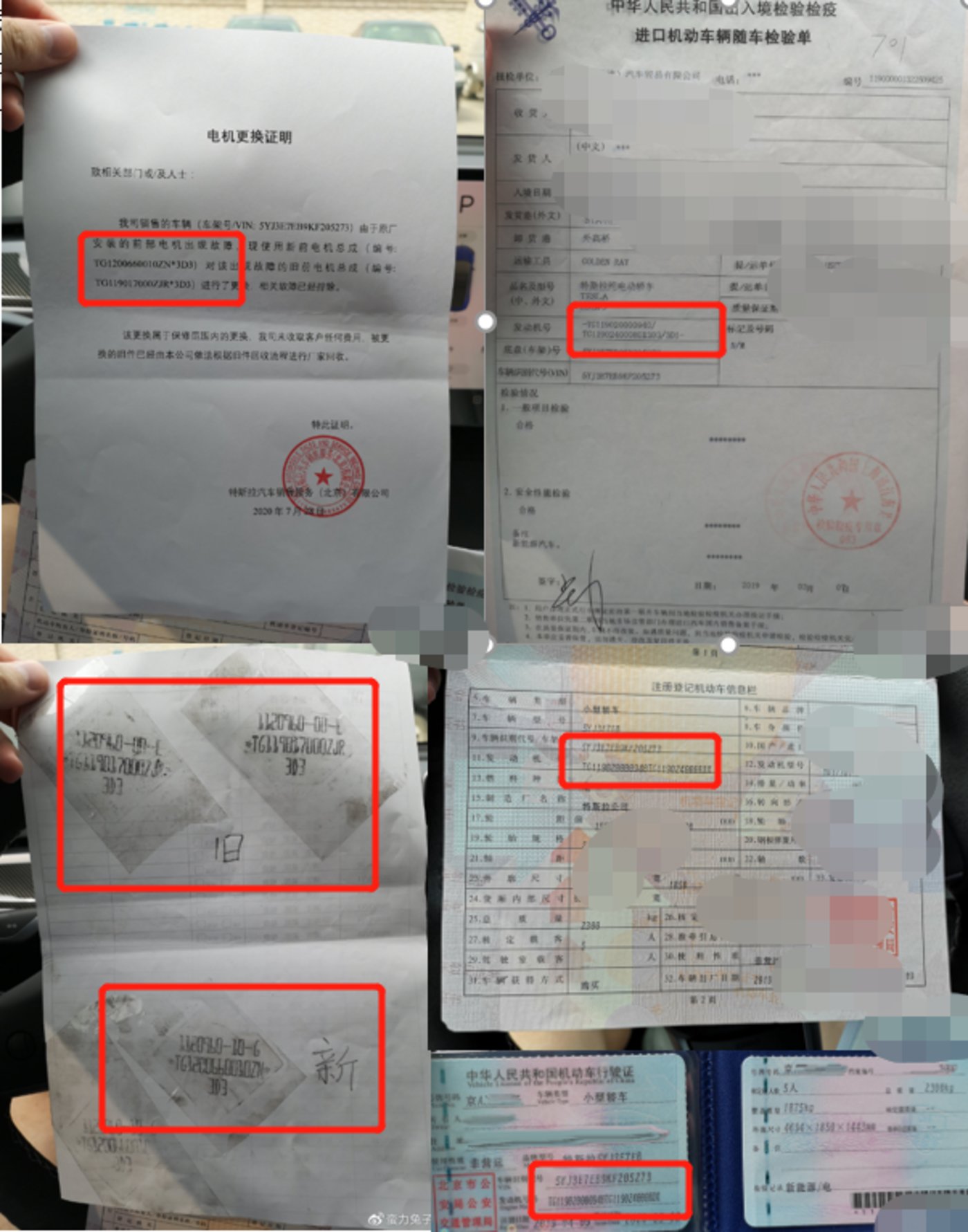 Statements, rubbings, driving copies, green copies and customs declaration forms provided in the half of the month 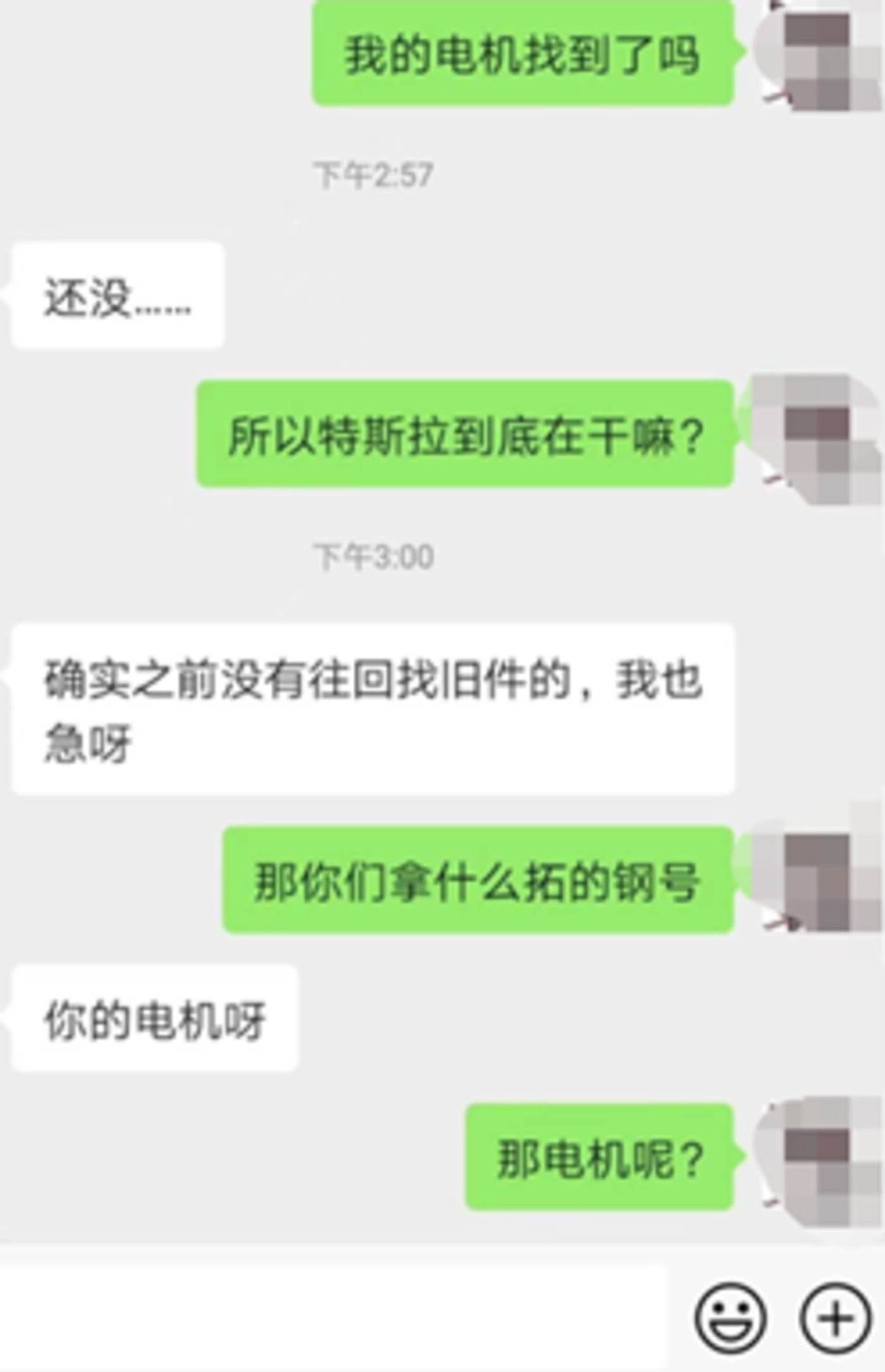 Chat records provided by half moon

After a period of time, the after-sales manager, the store manager and the North China Manager all changed their words and said that the original motor had been found, and the rubbing had been completed again and sent back to Beijing. However, the request to see it was never met. 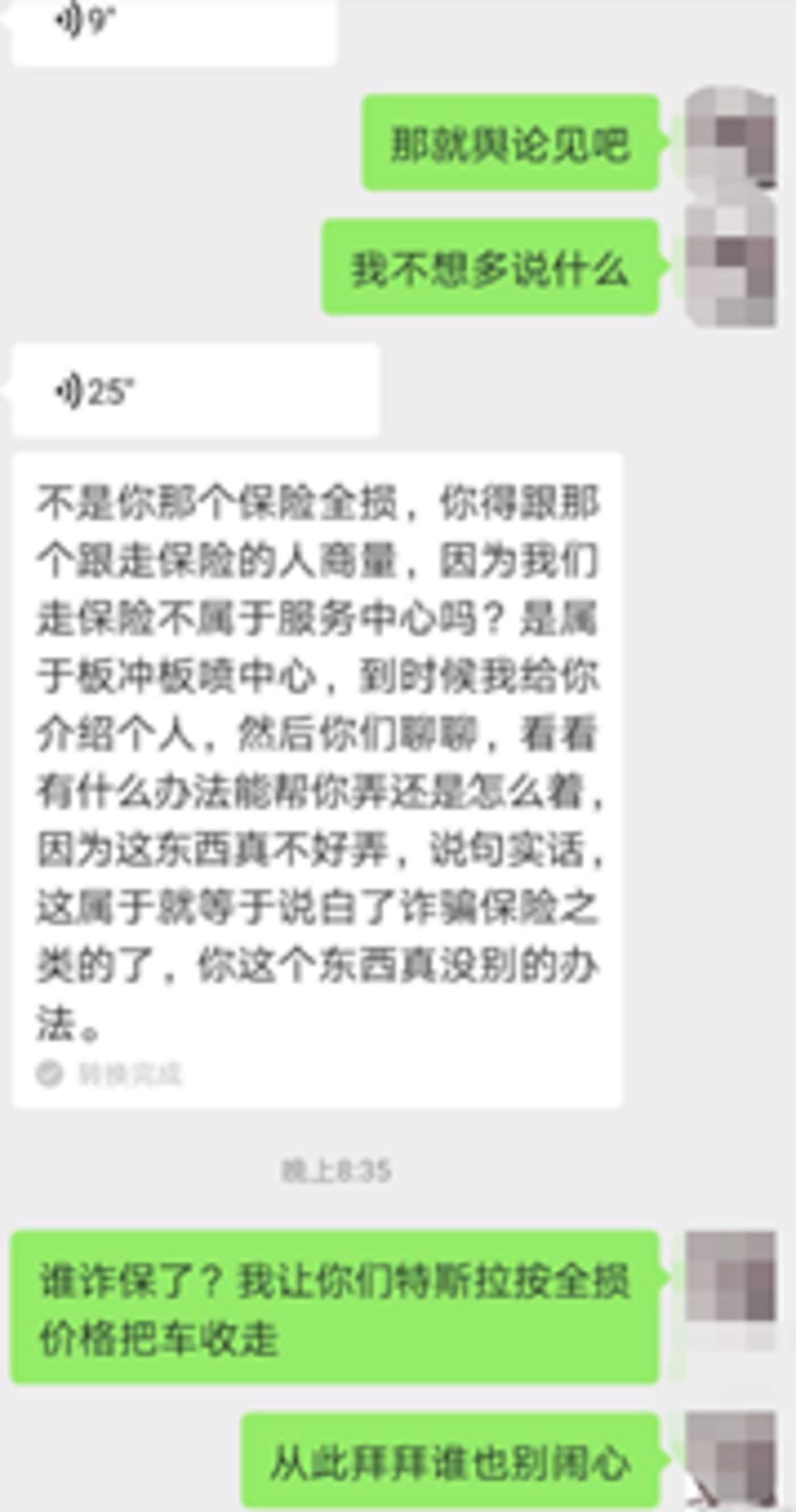 It's worth mentioning that half of the month said that his driving record U disk had been inserted in the car, but later when he checked it, the U disk was formatted.

On March 7, 2021, Lin Wei encountered Tesla Model s in front of her when she was driving on the expressway. In a hurry, Lin Wei slammed on the brakes, but the car didn't respond, causing two teslas to rear end directly.

After the incident, Tesla customer service said that the monitoring data showed that Lin Wei did step on the brake, but the force was too small. Lin Wei pointed out that she had pushed the brake to the bottom, and said that the timeline data provided by Tesla was wrong. Tesla insists on the data provided by itself, and there is no further progress in the event.

Afterwards, Qin Fei went through more than seven hours of rescue, abdominal surgery wound more than 20 cm, blood transfusion 5000 CC, to save his life. According to the investigation, the vehicle hit at a speed of 120km / h at the time of the accident, and Qin Fei was neither drunk driving nor drug driving. In this regard, Tesla said that Qin Fei stepped on the accelerator.

Similar to the half moon, the data in Qin Fei's dash cam U disk has also been cleared. There are still many car owners who reflect the problem of data clearing.

According to the information released by Tesla in the fourth quarter of 2020, the company has plans to increase the capacity of Shanghai Super factory from 250000 to 450000 in 2021, which will be second only to California factory, which is expected to produce 600000 vehicles a year.

At present, Tesla market is still hot. Radar finance called Tesla customer service, and the other party said that at present, all factories are in normal production. It takes about two weeks for Tesla Model 3 standard version to pick up the car after placing an order. Model 3 high performance version and model y can only pick up the car in the late second quarter of 2021, and model s needs to wait until the third quarter. 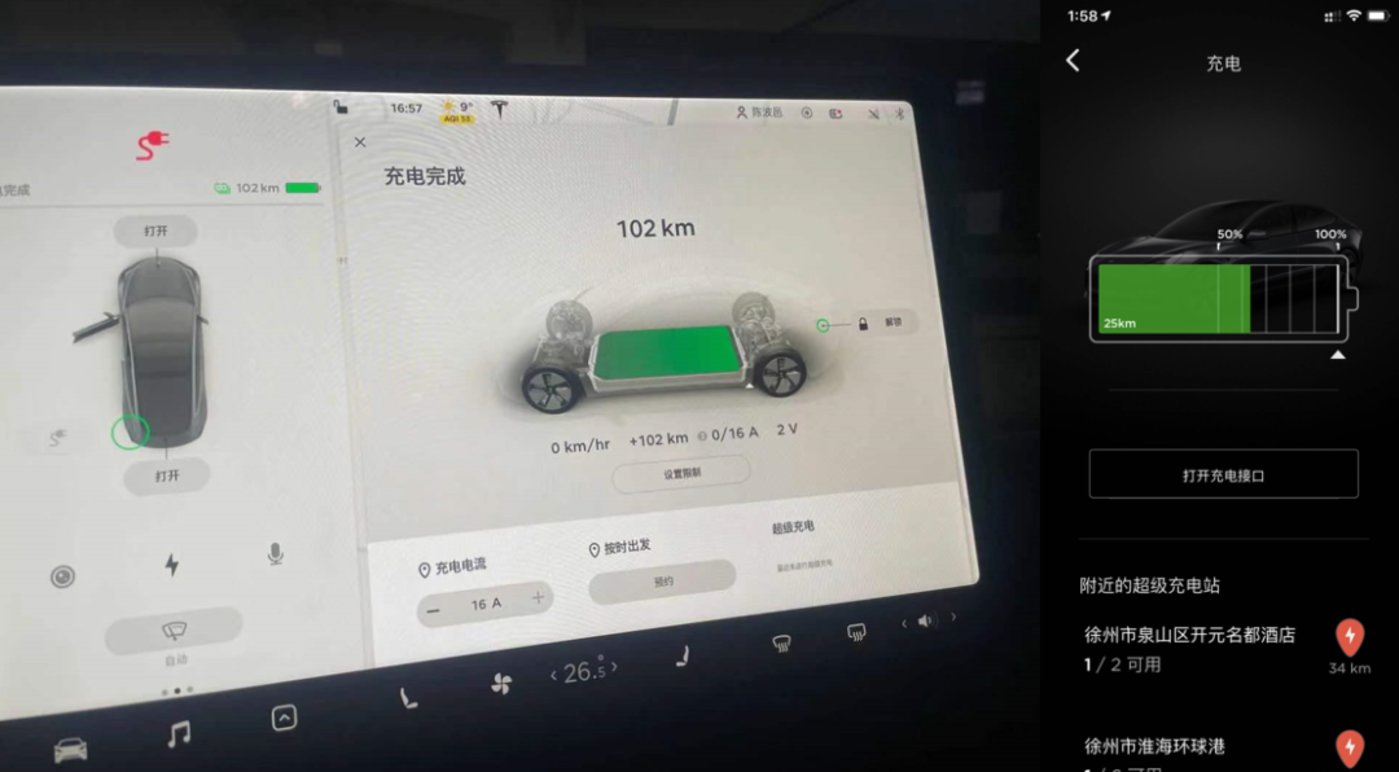 *In order to protect the personal information of the parties, except Han Chao, Yueban, Lin Wei and Qin Fei are all pseudonyms.

Related news
13 years of history NVIDIA gave up Tesla brand in a low-key way: name collision with electric vehicles
NVIDIA gives up Tesla brand in a low-key way: because of its name collision with famous electric vehicles
Linux From Scratch v10 release
@!!FROM 18-70YEARS/Call king@+27715451704 HOW TO JOIN ILLUMI
Hot news this week
2021 Hurun self made list of the richest people under 40: 38 year old Zhang Yiming ranks first in China
Tencent Teana laboratory holds a cross boundary Seminar on artificial hearing technology: cochlear implant technology is undergoing cross boundary development
Dada's latest equity exposure: Jingdong is the major shareholder, and Kuai Jiaqi holds 7.8% of the shares
Shell equity exposure: Zuohui has 81% of the voting rights, and Tencent holds 5% of the shares of two shareholders, hillhood
For the first time in history! Sanxingdui "cornucopia" 3 pit successfully took out the complete round mouth square statue
Xiaomi donated to Tsinghua University to set up Xiaomi artificial intelligence Innovation Research Fund
Benchmarking Tesla semi? Geely responded to rumors of developing pure electric heavy truck: no comment
Spend another 20 billion dollars to buy nuance, where did Microsoft spend its ten-year "cash" capability?
With over 17 million number carrying users and 99% success rate in one hour, is it the best time to handle it?
Lenovo he Zhiqiang: the cumulative income exceeds US $500 million, Lenovo venture capital enters the payback period
The most popular news this week
Ctrip landed in Hong Kong stock market today, with a market value of more than 170 billion Hong Kong dollars
It is reported that Lianfa technology will use 4nm technology to manufacture 5g mobile chips
Tesla hit a tree at high speed, two dead! Police: driving without driving
Hackers focus on virtual currency! A man was stolen more than 2 million yuan
Better than snapdragon 888! Samsung Galaxy Z fold 3 uses snapdragon 888 plus
Post-90s and post-95s become the main force of blind date: China's single population exceeds 200 million
Cryptocurrency crash Market: some people crazy cash out, the U.S. government to move
Not ppt! Take alpha s, Huawei's autopilot, and deliver the Huawei version within this year
1 billion US dollars, over 5000 R & D personnel! Huawei Wang Jun: Huawei Bu has no revenue target this year
Why is "Huawei automobile" known as the first automatic driving? Top executives reveal secrets in person