Honda "fight" Tesla! Two car owners fight each other in the street

However, the owners of both sides didn't deal with it calmly. Instead, you pushed me and I pushed you, and gradually they began to fight each other.The two also hit from the rear to the front of the car. It was obvious that the owner of Tesla Model 3 was too strong to use force, and was soon suppressed by the owner of Honda Aode.

What's more unexpected is that,Aode racing car owners directly suppressed the model 3 owners on the hood, the latter could not resist, fighting each other into a sticky state.

After learning of the situation, the third branch of traffic police, together with Jinjiang District Public Security Branch, immediately investigated the suspected illegal acts according to law.

After investigation, at about 18:00 on that day, sun (male, 32 years old, from this city) drove a Honda business car of Sichuan aj2xxx,Sichuan ad56xxx Tesla car, driven by yuan (male, 26 years old, from the city), was caught in jiaozi overpass on the Third Ring Road of the city due to lane change, causing a quarrel between the two sides and then fighting each other.

According to the relevant provisions of the road traffic safety law of the people's Republic of China, the third branch of the traffic police bureau fined sun 150 yuan and yuan 200 yuan.

In accordance with the relevant provisions of the law of the people's Republic of China on punishment for public security administration, Jinjiang District Public Security Bureau,Sun and Yuan were given administrative detention for 7 days and fined 300 yuan.

Chengdu police tip: when driving, pay attention to keep a safe distance from the car in front, do not change lanes and add traffic jams at will, drive cautiously and drive in a civilized way, so as to build a safe and harmonious traffic environment. 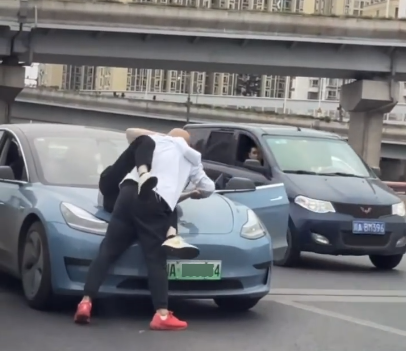 Related news
Take Two Show Game Sales: More than 120 million copies of "GTAV" and 29 million copies of "Big Cousin"
Honda China and Tencent sign a memorandum of strategic cooperation to explore the upgrading of the auto network service
13 years of history NVIDIA gave up Tesla brand in a low-key way: name collision with electric vehicles
NVIDIA gives up Tesla brand in a low-key way: because of its name collision with famous electric vehicles
Hot news this week
2021 Hurun self made list of the richest people under 40: 38 year old Zhang Yiming ranks first in China
Tencent Teana laboratory holds a cross boundary Seminar on artificial hearing technology: cochlear implant technology is undergoing cross boundary development
Dada's latest equity exposure: Jingdong is the major shareholder, and Kuai Jiaqi holds 7.8% of the shares
Shell equity exposure: Zuohui has 81% of the voting rights, and Tencent holds 5% of the shares of two shareholders, hillhood
For the first time in history! Sanxingdui "cornucopia" 3 pit successfully took out the complete round mouth square statue
Xiaomi donated to Tsinghua University to set up Xiaomi artificial intelligence Innovation Research Fund
Benchmarking Tesla semi? Geely responded to rumors of developing pure electric heavy truck: no comment
With over 17 million number carrying users and 99% success rate in one hour, is it the best time to handle it?
Spend another 20 billion dollars to buy nuance, where did Microsoft spend its ten-year "cash" capability?
Lenovo he Zhiqiang: the cumulative income exceeds US $500 million, Lenovo venture capital enters the payback period
The most popular news this week
Ctrip landed in Hong Kong stock market today, with a market value of more than 170 billion Hong Kong dollars
It is reported that Lianfa technology will use 4nm technology to manufacture 5g mobile chips
Tesla hit a tree at high speed, two dead! Police: driving without driving
Hackers focus on virtual currency! A man was stolen more than 2 million yuan
Better than snapdragon 888! Samsung Galaxy Z fold 3 uses snapdragon 888 plus
Post-90s and post-95s become the main force of blind date: China's single population exceeds 200 million
Cryptocurrency crash Market: some people crazy cash out, the U.S. government to move
Not ppt! Take alpha s, Huawei's autopilot, and deliver the Huawei version within this year
1 billion US dollars, over 5000 R & D personnel! Huawei Wang Jun: Huawei Bu has no revenue target this year
Why is "Huawei automobile" known as the first automatic driving? Top executives reveal secrets in person